HA Solar Observing on a Budget

Ha Solar Observing on a Budget

Before the introduction of the annual NEAF solar party in the courtyard, a couple of demonstration Ha-filtered telescopes were usually set up by the side entrance. At my first NEAF, I happened to be passing these during a low-traffic period and took the opportunity to observe the Sun in Ha for the first time. This was in a Tele Vue telescope equipped with a Coronado SolarMax filter and a Tele Vue binoviewer. I was lost from that moment. When I got home, I promptly ordered a Denkmeier binoviewer and a Coronado SM40 filter setup for my TV Genesis SDF. Since then, I've always had an Ha observing system of one kind or another (binoviewers, too - but that's another story!) 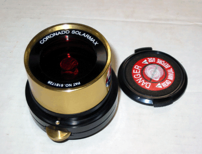 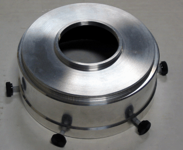 That proved to be a very effective system for me. The short focal length of the SDF was ideal for the front-etalon design of the SolarMax filter. The downside was that I hadn't yet discovered heavy-duty alt/az mounts so operating the relatively heavy Tele Vue telescope required setting up a midsized German EQ mount. I found that I did this more and more rarely and in the end I determined that I had too much money tied up in a setup that was rarely used. I sold the Genesis and considered several alternatives. I had an inexpensive 60mm achromat on a lightweight, tracking alt/az mount. I decided to find a less expensive filter that would work with that setup. The 1.5a filter system by Thousand Oaks looked interesting and I knew of a fellow who had one but wanted to upgrade to a Coronado filter like mine. A quick swap (plus a few bucks my way) and we were both in business. The TO filter did work on my lightweight rig but wasn't ideal. Being a rear-etalon system it needed to see a shallow light cone - f/20 or greater. Barlowing the f/11 achromat got me there but the image was fairly dim through the 60mm prefilter and the mount was pretty shaky. The wider bandwidth of the TO filter meant that although prominences were easy to observe, surface detail was lacking. It seemed to be good value for my reduced investment but still didn't get a great deal of use and I eventually sold it.

After the observatory was completed and a 12" LX200 permanently mounted within I decided to seek an Ha filter that would work with that telescope. The long focal length (3000mm) limited me to a rear-etalon system so I bought another Thousand Oaks 1.5a filter plus a 4" prefilter to fit the Meade. This was a nice rig; the 4" prefilter placed the system at about f/30 so no Barlow was required and the filter was much less fiddly. Due to the larger aperture, much more prominence detail was visible on days of exceptional seeing. I figured I was set. Then the decision was made to switch back to a GEM in the observatory so the 12" Meade left, and the Ha filter left with it

In the meanwhile, Coronado had released a new product that really made narrowband Ha imaging affordable - the PST. Here was a complete sub-Angstrom Ha observing system for $500! I had pre-ordered one when they announced it, but after trying a pre-production display unit at NEAF and being disappointed, I cancelled it. Later I learned that they had resolved the performance issues and were shipping very effective units. I picked one up and found that it did, indeed, work quite well, offering nice prominence views and much better surface detail than my Thousand Oaks setups had offered. Being a rear-etalon system, it did suffer from the "sweet spot" syndrome common to those arrangements but it was reasonably well centered and not a big issue except for photography. The PST had other disadvantages for photography also, being limited to a very small blocking filter and having limited focus range. I used the PST for quite a while before acquiring "bandwidth fever". This is similar to aperture fever but the victim is looking for smaller numbers rather than larger ones.

There's a hierarchy of detail visible at the Hydrogen-alpha line depending on the system's bandwidth. A bandwidth of 2 Angstroms or less will display limb prominences but only gross surface detail such as sunspots (which are also visible in whitelight filters). As bandwidth goes below 1 Angstrom finer surface details appear, and as the filter narrows the available detail increases, as does the cost. The PST is rated at "below 1 Angstrom"and offers some fine surface detail. The Coronado SolarMax filters are rated at about .7A and bring out more fine detail with less of a sweet spot. Adding an SM40 filter to a PST brings it down to .6A or less, and stacking two SM series filters gives .5A. The PST and SM40 each have an aperture of 40mm. Other filters are available at 60mm and 90mm, which permit higher magnifications when seeing permits.

I liked the PST (it's a terrific value at $500) but after looking through a variety of narrower systems I began to feel the desire to narrow things down a bit. The obvious answer was to acquire a doublestacked 60mm Coronado dedicated Ha telescope with a bandwidth of .5A. This is a fine instrument and appears to me to offer the best value for money among the higher-end systems. However, at $5000 I wasn't quite ready to jump in. 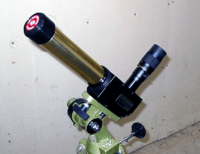 Now comes the complicated part - and the purpose of this article. I needed to decide what would be, for me, the most cost-effective way to achieve a worthwhile upgrade of performance. Some things had changed; I now owned a pretty nice alt/az mount and a quality short refractor that I knew I would be keeping. This meant that I had the option of going with another front-etalon filter system without extra expenses. I also already had the PST so it could be used as the basis for a better system if that proved desirable. I knew that at this point I was willing to remain at the 40mm aperture.

The next level up (down in bandwidth) from the PST is the SolarMax 40mm filter. This can be installed on an existing short refractor, or is available with a dedicated 40mm F/10 telescope. The SM40 filter plus the smallest blocking filter (the BF-5) costs about $1100 plus about $150 for an adaptor to fit the etalon to a telescope. The dedicated 40mm telescope with the same etalon but a larger blocking filter (the BF-10) is about $1700 (the bare filter plus this larger blocking filter is about $1450). Either way, one is well into the sub-Angstrom range at .7A or less, but at a cost of at least $750 more than a PST. In addition to the narrower bandwidth, these systems offer conventional focusers and focus range along with a reduced sweet spot effect, giving them a substantial edge for photography. I knew what to expect from such a system, as my very first Ha observing setup was the SM40 and BF-10 blocking filter. The difference in surface detail between such a setup and the PST is substantial. 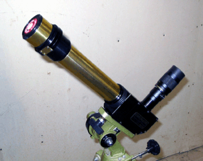 The next step down in bandwidth is a doublestacked PST. This requires a PST ($500) plus an SM40 filter ($800). For about the price of an SM40/BF-5 combo it offers narrower bandwidth (.6A or less) and includes the optical tube. One is still restricted by the sweet spot issues and limited focus range. The question for me was how noticeable the .6A views would be compared to those at .7A. I picked up another SM40 and tried it on the PST. Wow! Definitely better than the bare SM40. For someone uninterested in photography, or willing to deal with the issues presented by the PST in this area (some terrific DS PST shots have been taken) this is a no-brainer compared to the SM40/BF-5 UNLESS one is considering upgrading further while remaining at 40mm aperture.

One thing that the SM40/BF-5 setup buys one is the option of adding yet another SM40 in front of it, reducing the bandwidth to .5A or less. This is the bandwidth offered by that $5000 60mm doublestacked MaxScope I mentioned above. For about $1000 over the cost of the SM40/BF10 one could have much of the performance of the DS 60mm, though of course with less available magnification, resolution, and brightness - without the compromises involved in using the PST as a base.

To recapitulate - the systems available with 40mm aperture are (in order of decreasing bandwidth):

As in all astro gear choices, the best value depends on the individual. Right now I have the PST plus an SM40 that I can use to doublestack it. I also have a BF-5 filter so I can use the SM40 on my AT66 while also using the PST in its normal configuration (tempting for public sessions). After looking at the above table, I think I'll stay right where I am for a while. Eventually I'll probably pick up another SM40 and doublestack that, selling the PST to partially finance the switch.