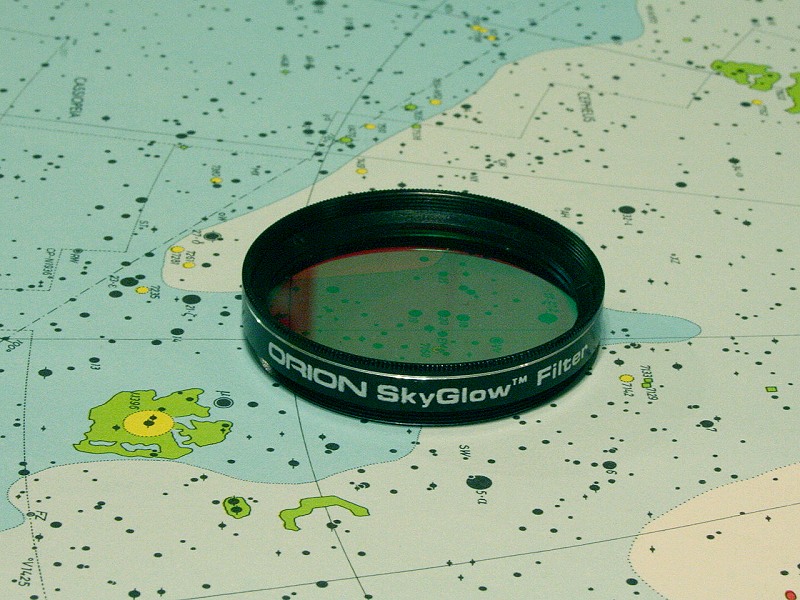 There has been considerable controversy concerning the effectiveness of various broad-band “Light Pollution Reduction” filters ever since the first decent ones appeared in the early 1980's. Some observers contend that these filters offer mild but definite improvement in the views of various deep-sky objects, while others say that the broad-bands offer nearly no improvement at all and are not really worth the money. I am somewhat in the former camp, as I have seen some benefit from the broad-bands, so when I started upgrading to 2-inch format eyepieces, I decided I needed a new filter. I purchased the Orion SKYGLOW LPR filter in hopes that it would perform at least as well as my old 1.25” Lumicon Deep-sky filter. Overall, the Skyglow has shown itself to be a proper broad-band unit with characteristics similar to some of the other broad-band filters.

What exactly *is* a "broad-band" filter?

Broad-band "Light-pollution Reduction” (LPR) filters are designed to help improve the visibility of a variety of deep-sky objects by blocking out the common Mercury vapor, Sodium, and some other emission lines from man-made and natural (airglow) sources which contribute to skyglow, while passing as much of the other wavelengths as possible. Common LPR designs tends to have a broad primary passband located somewhere between about 4500 to 5300 Angstroms, as well as a broad “notch” of low transmission, usually somewhere between about 5300 Angstroms in the yellow to around 6300 Angstroms in the red part of the spectrum. The shapes of the passbands vary somewhat, with some designs having multiple passbands, smoothly sloping mild passbands, or sharper narrower passbands that are halfway between the "standard" LPR design and the true narrow-band "nebula" filters. With emission nebulae, most of the light from their narrow spectral lines (Oxygen III and Hydrogen-beta) still gets through, resulting in somewhat more contrast than without a filter. However, for objects which emit light over a broader range of wavelengths ("continuum emitters"), some of the light can get excluded in an attempt to help reduce the effects of some of light-pollution sources. This can sometimes result in a slight dimming of some objects, which is one reason a few amateurs may feel that these broad-band filters aren't worth much visually. Still, the sky background is generally darkened and in some cases, a subtle increase in contrast has been reported with at least some objects like clusters and some galaxies. Also, astrophotographers often use broad-band filters to help reduce the effects of light pollution on wider-field images of the sky.

The Orion SKYGLOW: The filter comes in two standard models for 2” and 1.25” barrel eyepieces. The review unit was a 2” model about 5 cm (2”) across and 1 cm thick including the threads. The filter easily threaded fully on to both of my 2” eyepieces. However, it would only go on about half a turn on my Williams star diagonal's threaded 2”-1.25” adapter and somewhat less than half a turn on the front of the diagonal itself and on the front of my Tele Vue star diagonal. This was a little disappointing, although even at half a turn, the filter was securely mounted and in no danger of coming off. Shaking the filter gently resulted in a faint rattle caused by a slightly loose retaining ring. It took only a gentle touch with an improvised spanner to tighten the ring and eliminate the rattle, although it wasn't exactly terribly loose to begin with. The filter came in a small round 2” filter case with a small foam edge insert to hold the threaded portion in-place and prevent the filter from sliding around in its case (a nice touch). Tilting the filter produced the usual varying color hues common to most interference filters. The reflected color of light off the filter's surfaces was more neutral than the pale gold reflections off my old Lumicon Deep-sky filter.

Observations: I tested the Orion SKYGLOW filter in my hand-held spectroscope, in a camera pointed at surface night lighting, and visually in my 100mm f/6 refractor and 9.25 inch f/10 SCT at fairly low powers. In the spectroscope, the primary passband of the Skyglow looked slightly brighter and more uniform than my old 1986 vintage Deep-sky's did. Both filters did fairly well against the major Mercury Vapor lines from local lighting, although my interior Mercury fluorescent lights did get through both filters with a band in the blue-green part of the spectrum. Indeed, the violet “G” emission line at 4358 angstroms got nicely blocked by the Skyglow, but was still faintly present in the Lumicon Deep-sky. In camera images of a street lit by a Mercury vapor light, the Skyglow reduced the light nicely, with the glare reduced to a pale glow on the street below. The Skyglow also gave a more color-neutral and pleasing view with slightly higher light throughput than with the Deep-sky filter. The Deep-Sky also attenuated the Mercury glow on the ground as well, but gave it a somewhat more violet cast. 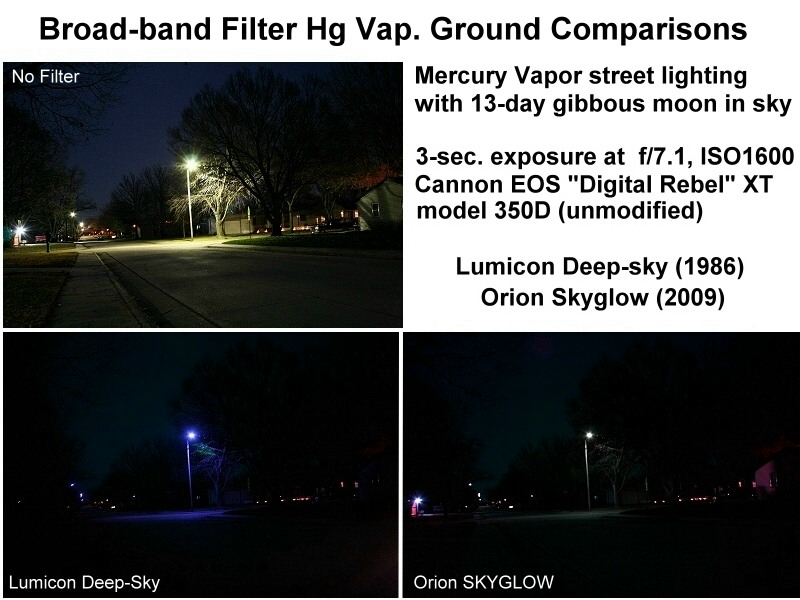 On High-pressure Sodium, both filters were a little less effective than with the Mercury vapor lighting, but they still provided very noticeable rejection of the wide orangish glow that gives HP Sodium lighting its characteristic color. The Skyglow had a slightly wider and stronger red secondary passband, so its rejection of the entire primary HP Sodium vapor band was just a tad less aggressive than that of the Lumicon Deep-sky, although the Skyglow still cut deeply into it. In camera images of the scenes lit by HP Sodium street lights, the Skyglow noticeably cut down on that yellowish-orange glow over non-filtered use, although the ground had a more magenta hue than that seen with the Deep-sky filter. Indeed, the impression was that the overall image was a tad brighter in the Skyglow than in the Deep-sky filter, and that impression continued when visual observations of objects using the filters were conducted. 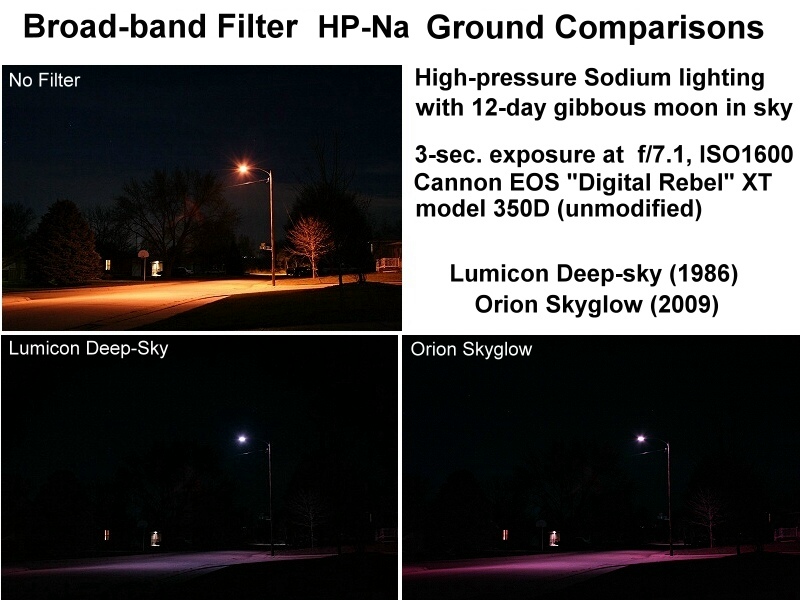 Visually with the telescopes, the Orion SKYGLOW performed much like my old Lumicon Deep-sky, providing a somewhat darker sky background and a slight to moderate gain in contrast on various deep-sky objects. Star images were fairly sharp across the field, although they did show the usual faint red halo when slightly defocused (caused by the multiple passbands). The broad-band filters performed somewhat better under dark sky or mild light pollution conditions than they did under moderate light pollution. On emission nebulae, the gain was somewhat more than was seen with continuum objects, although I still liked the use of a true narrow-band filter for nebulae more than the Skyglow. M57 under moonlight was easier to notice at only 24x in my 100mm f/6 when the filters were used, as was M27. In comparison, I did like the view of both nebulae just a tad more in the Skyglow filter than I did with the Lumicon Deep-sky filter. The results with M42 were quite similar with again a very slight nod to the Skyglow. Indeed, with competing moonlight, I saw a few more stars in the small cluster Dolidze 5 when using the Skyglow than I saw with the Deep-sky filter. Without a moon, I was particularly impressed with seeing M33 jump out a bit with hints of one of its arms in my 100mm refractor when the Skyglow was used from my driveway, despite the in-town conditions (ZLM 5.6). Indeed, the two main dust lanes of M31 were noticeably enhanced when I used the Skyglow in my 9.25 inch SCT, although they were visible without the filter as well. All in all, the Skyglow filter was doing about what I expected a decent broad-band filter to do.

Summary Remarks: Overall, I did like the Orion SKYGLOW broad-band LPR filter, as it not only nicely filled my need for a 2” model, but was as good or maybe just a hair better than my 1.25” Lumicon Deep-sky broad-band. I would have to give the SKYGLOW the following letter grades:

Optical Quality: A (no visible defects in the filter and uniform coatings).

Performance: B+ (as good as or maybe slightly better than the Lumicon Deep-sky).

Cost/Benefit Ratio: B (well, that goes for most broad-band filters).

Conclusion: the Orion SKYGLOW LPR filter is a reasonably effective broad-band filter for helping enhance the views of some deep-sky objects. It offers performance similar to that of other decent broad-band filters like the Lumicon Deep-sky, and if one knows what to expect, can be beneficial to amateurs who may be looking for just a little more contrast.