We often hear people state exit pupil is what determines the brightness of your binoculars. But stop for a moment and think, that does not explain why sometimes it seems that two binoculars, even with the same size exit pupil, do not appear to be equally bright. That’s because it is not just exit pupil which determines brightness of image. It is also dependant on the maximum extent of full illumination. Tests that show the extent of the Illumination of the Exit Pupil DO explain why one model can be brighter than another. Internal vignette is the cause of reduced illumination.

Here’s some basic starting information for the three binoculars that are the subject of this study:

when set to distance focus, exit pupil = 3.36mm
magnification therefore is about 21.1x, call it 21x
21x70 used for calculations

To illustrate the illumination, here is a series of photos looking thru these 22x binoculars. The edge of objective is lined up with the edge of internal baffle or prism stop, whichever hits first. Notice the size of clear view thru and out the back end. This mimics the measurement one gets when checking for full illumination. The Ultra and the Signature are fairly typical of very good binoculars. All four of these in the top 15% of all measured. 60 out of 70 binoculars DO NOT have as great a degree of illumination as any of these four. Look at the difference between them from smallest to largest. 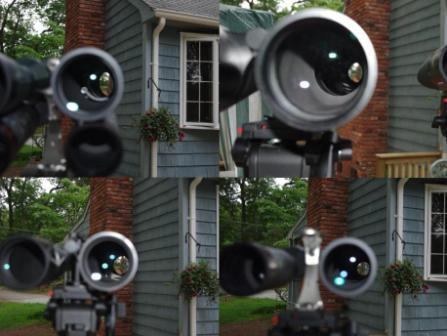 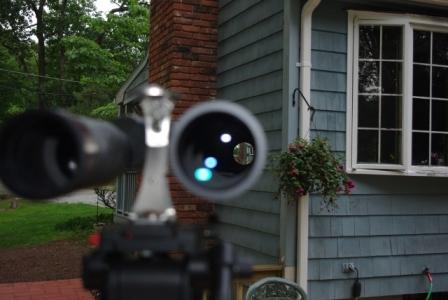 This study should highlight for our readers an important fact about binoculars. All too often discussions of exit pupil are brought up and inevitably it leads to thinking larger exit pupil is brighter. Well, that forces you to assume that all binoculars being compared are of the exact same quality and construction. It does not take into consideration the illumination of the exit pupil. It assumes the percent illumination is the same in every binocular. We know that is not the case.

Illumination tests verify how far out in the exit pupil the system delivers 100% transmission. As shown in the following example, it may be the Illumination that has a greater effect on the brightness outcome.

Now let's just assume our laser test results show the T95 model has 100% illumination over only the central 10% of exit pupil and drops to 50% illumination by 40% out from center. I have a few models which fit this category perfectly. On the other hand our T80 model is fully 100% illuminated from the entire central 40% diameter of the objective. I have several models that show illumination this good and all have better spec transmission values, so none would be this poor (again skewed purposely).

Even though I've skewed my sample data twice against the T80 model, when you analyze the brightness of that central 40% diameter of the exit pupil, you will find that the T80 model is 30% brighter than the T95 model.

There are dozens of sources on the internet that list the six major aberrations and how they affect the view. There are few sources on the internet (other than some well-known tester's reports) that explain and show in detail the deficiencies that may have just as much if not more effect on the view through the binocular. When you read reports, look for meaningful data. Effective aperture and illumination are very important to the overall performance of a binocular.

Brightness is determined by much more than exit pupil. Testing for percent illumination across the exit pupil shows illumination varies dramatically across a range of binoculars. Brightness can be compared by exit pupil only IF all instruments have equal illumination. That is rarely the case. I'll give you an example.

If you break down the light into concentric rings so you can calculate how much light is delivered from each ring, you can approximate how much light is delivered into the exit pupil. The 100% illum area of the central diameter is fully 100% lit. But, take the ring between 15mm and 20mm out on the lens diameter. That ring delivers between 75% and 50% of its light. Starting from the fully illuminated center, light measured in each concentric ring further out drops to zero at the edges. You can do this for each concentric ring and approximate the total light in the exit pupil by adding up the subtotals for each individual ring.


The above table shows three binoculars of nearly equal size and exit pupil. Area of full aperture is based on actual effective apertures. Without analysis, we would expect them to be equally bright. But we can see from the illumination data that the Fujinon provides an effective 932 sq mm out of 1272 total sq mm of illumination, far more light to the exit pupil than either the Bushnell Legend 8x42 or the ZEN ED2 8x43, even though it is slightly smaller in total light gathering area.

Let’s see how our three subject binoculars stack up against each other.

Well, the most outstanding measure of the above three is the percent illumination of the Tak 22x60. I've now measured about 70 binoculars for illumination. Only 10 of them are over 40%. Only 4 of those reach 50%, two Fujinons, a Pentax and this WO 22x70. BUT only one exceeds 50%, the Tak 22x60 Astronomer. And it shows that an astonishing 83% of the central diameter of aperture provides 100% illumination to the exit pupil. Let me explain what this means.

Both the GO 22x85 and the WO 22x70 have 35/36mm of the center of the lens that is providing 100% illumination of the exit pupil. Then they both taper from 100% to zero at the edges. Assuming illumination in both is a constant slope of drop-off from full to zero at the edge, then the GO Signature will have slightly more total light delivered to the exit pupil, simply by nature of the wider aperture. But how much more? Surprisingly, not as much as you might think.

Again, If you break down the light into concentric rings so you can calculate how much light from each ring, you can approximate how much light is delivered into the exit pupil. The central area of 35mm diameter is fully 100% lit. But, for example, take the 10mm wide ring between 45mm and 55mm diameter. 55mm sqrd minus 45mm sqrd leaves us with a ring of 3025-2025=1000sqmm. For sake of our example let’s say that ring delivers 70% of its light. Therefore it effectively delivers about 1000sqmm x 70% = 700sqmm of light. This continues to decrease in each concentric ring further out until it drops to zero at the edges. Having done this for each ring, we get the approximate total light in the exit pupil by adding up the subtotals from each ring.

The WO22x70 has an even more efficient light delivery system. It measures at 50% full illumination, ranking it with 4 of the top 5 binoculars I've seen. I'd consider it excellent.

The Tak Astronomer 22x60 has such an efficient light delivery system that it is acting more like it is an excellent 22x70. It is so efficient that it is a superior 22x60 and ranks by far the best binocular I’ve ever tested.


The GO22x85 shows the largest points when focused best. Stars don't get as small as seen in the WO22x70. On a close uneven pair it makes it just a bit more difficult to see the pair cleanly separated.


The WO22x70 refines the image to somewhat better than is shown in the GO22x85. The focused dot is a bit smaller and the tiny spikes from the brightest stars are just a bit smaller.

The Tak22x60 focuses to extremely fine pinpoint dots, half the size of the dots in the GO22x85. There are no minor spiking points coming off of even the brightest star. Even on a star as bright as Vega, the Tak focuses a smaller dot and shows almost no points or halo around the clean dot.

So, for Apo images and finest pinpoints try the Tak. For deep sky, but a bit less refined image, try the GO Signature. Fairly obvious, but the WO22x70 falls in between. The WO22x70 shows better pinpoints than the GO22x85 but not as good as the Tak, and the image quality of the WO, although better than the GO, is not the same as the Apo correction of the Tak.


By the standard basic discussion of exit pupil, you would be lead to believe the WO22x70 will be brighter than the Tak22x60. But the far greater percent illumination of the Tak equalizes the light delivered into the exit pupil. So, here's a case where we have equal power binoculars, the WO22x70 has a 3.3mm exit pupil and the Tak22x60 has a 2.7mm exit pupil, and yet the amount of light delivered to the exit pupil is near equal. It's all very much dependant on illumination.

You cannot assume just because a binocular has a larger exit pupil that it will deliver a brighter image. That forces you to accept that there are never differences in the quality of the delivery system. Again, we know that quite often is not the case. Trying to assess brightness without determining illumination can be quite misleading.

Where we really see this illumination or brightness come into play is when comparing some binoculars that have readings of only 10% to others with 40%-50%. Of those I’ve tested, 37 out of 69 binoculars show 100% fov illumination over ONLY 20% or less of the lens diameter. 18 (more than 25% of all 69) of those were less than 10%. For the most part, although there are a few unpleasant surprises, the <10% list reads like a who's who of cheap binoculars, a few of which have been given glowing reviews by some users. Half of those are also binoculars that suffer from about 15% (7mm-9mm) reduction in true aperture.

The average end user will not be likely to measure illumination, nor will they be likely to have this information when purchasing binoculars. However, for the most part, very inexpensive binoculars produce very low results and somewhat more costly binoculars produce better results. This is one of the hidden aspects that we often hear people ask about when they say, What do you get when you spend more on higher cost binoculars? Well, this is one of those attributes you get when you spend more. Do you need it? That’s your choice.