The purpose of this short paper is to help binocular observers understand why a lower powered binocular is often recommended for handheld use.

This is a resolution comparison of four binoculars; a 15x70, a 12x50, a 10x50 and a 8x42. I already knew what resolution (mounted) could be achieved with each and that was retested here and confirmed to previous tests. I wanted to find out how that resolution changes for mounted binocular versus a braced supported binocular, braced elbows and un-braced handheld. It was expected that resolution would get progressively less and that was found to be true. But by how much, and what affect does each binocular size have on the outcome?

It should be fairly easy to rationalize that as you increase magnification, you can see smaller or closer objects resolved. For example, observing double stars, you might be able to see a 25 arcsecond double with an 8x42, a 20” double with a 10x50, 16.6” with a 12x50 and 13.3” with a 15x70. In order to compare one binocular to another we can multiply the angular arcsecond results of the readings by the magnification of the binocular. This converts resolution values into angular arcseconds “apparent size”, so any one binocular can be compared to any other. For instance seeing to 10 arccseconds with a 15x binocular gives an apparent size reading of 150 arcseconds, and seeing to 12 arcseconds with a 12x binocular gives a reading of 144 arcseconds. A 10x binocular would need to see resolution of 14.4 to 15 arcseconds to match those readings and an 8x binocular would need to see 18” or 19”. 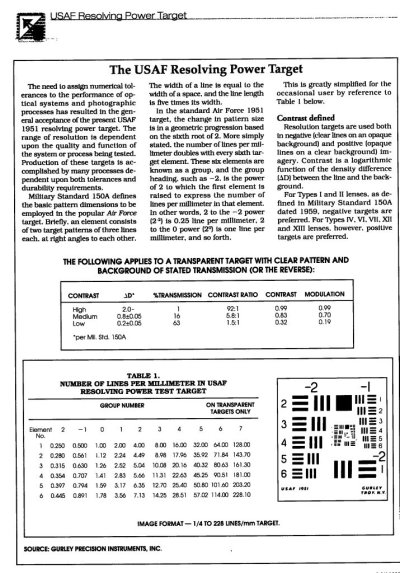 The following values for resolution were recorded using a USAF Line Pairs Bar Chart (pic above). A copy of that chart is available here http://www.cloudynights.com/photopost/showphoto.php?photo=5821&password=&sort=2&thecat=500

in my gallery with links to a discussion on the formula needed to convert readings to angular measure and a table of constants needed to use the chart. Resolution readings recorded from a line pairs chart will always exceed the resolution you can achieve observing double stars, so don’t be alarmed by the unusually fine resolution values reported here. That will remain a discussion for a future article.

As expected, lesser forms of steadiness in the support results in poorer resolution. What you can also see from these results is how much the larger binoculars are affected by a lack of support. There was essentially no difference between the 10x50 and the 8x42. And there was not much difference even with the 12x50, but with the 12x50 the differences grew wider with braced elbows or hand held. There was even a further slight drop in resolution when attempting to use the 15x70s with solidly braced elbows. I could not see as well as with the smaller binoculars. The real significant difference was seen when attempting to hand hold the 15x70s. In this case the resolution plummeted.

With 8x42, 10x50 and 12x50 binoculars there was a range of a 40% to 60% drop in achievable resolution from mounted to handheld. With a 15x70 there was a drop of 100% from mounted to handheld. As expected, when used mounted a 15x70 can resolve finer detail than a 12x50 or 10x50. However when used handheld, the difficulty of holding a 15x70 steady is far more pronounced and that shows in the results that equal or near equal resolution can be achieved with a 12x50 or a 10x50.

None of this was surprising to me. But it does illustrate what the lack of a stable support does to your view. And it very clearly illustrates for me just how poorly the handheld performance of a 15x70 matched up to any smaller binocular I choose to use hand held.

These hand held results would vary somewhat for other individuals, especially those who have practice at such sports as archery or target shooting. However, it should vary equally across all sizes and powers, so percentage difference results should be similar to those found here. For most people, this might give you some indication of how much you really lose when attempting to view hand held through a large binocular. This unsteadiness of the view due to magnification goes a long way towards supporting what I and many others have said: regardless of what large size binocular some users might claim to be a good hand held choice, a 10x50 or maybe at most a 12x50 might be a much better choice for many people.

I think another important piece of information this gives us is just how much resolution is achievable when using binoculars hand held for daylight viewing. Excluding the 15x70s, in all other cases hand held resolution was approximately 40%-60% less than mounted. I think this goes somewhat further towards supporting that the resolution you see hand held in a binocular in daylight or at night may be far more dependant on the power of the binocular than anything else.

But the conclusion reached by this little study is this; a 10x50 or a 12x50 binocular for handheld use will show you everything or nearly everything that you would be able to see with a higher powered binocular. An 8x42 binocular is just a little low on power and cannot reach the same results, but might be suited to some observers. If you can see the stars of clusters clearly separated with a 10x50 or 12x50, why hold the extra weight of a 15x70 to see little or no more? The choice is yours.

Clear Skies, and if not, Cloudy Nights