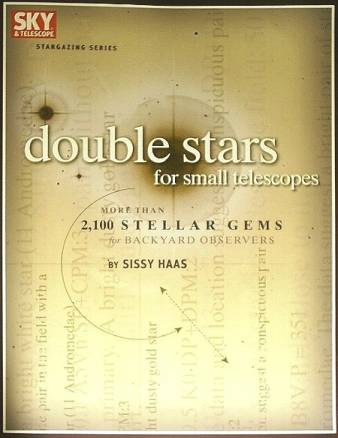 
One class of target which often seems to be slighted by amateur astronomers is double stars. While perhaps not quite as spectacular as some deep-sky objects which amateurs love to hunt for, double stars offer much even for users of modest telescopes when moon light or light pollution sends many DSOs into hiding. With this in mind, Sissy Haas has put together a book containing over 2,100 double star targets which may be worth going after in moderate to small apertures. With, DOUBLE STARS FOR SMALL TELESCOPES (DSFST), Haas has essentially created a "workbook" for amateurs who want to see just what doubles are up there for the taking.

The book is basically divided into two main sections: a simple brief introduction to double star observing, and a large catalog containing the data on each double grouped by constellation. DSFST mainly emphasizes the *fun* of tracking down and viewing these interesting objects, so it is more aimed at the average star gazer rather than at someone who is doing the measurement and study of doubles. Haas's book is not overburdened by an extended history of double star observing or early observers, although it does mention a little of that in the part on double star nomenclature. In the introduction section, Haas briefly covers things like star brightness scales, temperature, luminosity, and color, along with defining the types of double stars. There is one small error on page 2, stating, "Sometimes each star appears surrounded by a beautiful ring of light (an Airy disk)". This isn't quite right, as the Airy disk is really just the central spot of light which is surrounded by the first bright diffraction ring and any other rings which may be visible in the diffraction pattern. However, this may be a case, where the term "Airy disk" may have been misplaced in the text during editing. Haas supplies some estimates on what it takes to resolve or separate doubles of a certain separation plus a few observing hints along with tips on recording the observations. In addition, four large-scale star maps are provided which highlight 15 "Showcase" doubles which the beginner might want to try first. In general, this introductory section might have been just a little better if it had been a bit longer and more in-depth to serve some of the needs of the rank beginner. However, the slight weakness in coverage on some topics closely related to double star observation doesn't really harm the book all that much.

The second section is the "CATALOG OF DOUBLE STARS", and here is the real "meat" of the book. Doubles are grouped in tabular fashion by constellation (alphabetical order) and then listed within the constellation by right ascension. This can sometimes make it a little easier for the average observer to decide what to look at, rather than having to slog through a single massive list based on right ascension alone. Full data is provided including rough coordinates (to the nearest arc minute), designation, magnitudes, separation, position angle (with the year for the data) and spectral types (if known). Along side this data is a brief comments column which covers things like reported colors or brief comments by Haas or even some of the more famous double star observers. As most double star observers know, color estimates can vary all over the place, but generally, there is enough in the comments to know when a double will probably show some color contrast. The overall large-scale tabular format of the DSFST listings along with the lines and boxes used to separate the entries makes it fairly easy to look up doubles and read the data even under somewhat dim light.

The coverage of doubles in a given constellation tends to be fairly good, at least for those doubles which might offer something visually interesting to the casual observer. For example, DSFST has 2,101 doubles listed, which compares to only 525 in my old Double Star volume of the Webb Society Deep-sky Observer's Handbook, and 1,127 doubles listed in David Eicher's book DEEP-SKY OBSERVING WITH SMALL TELESCOPES. The number of doubles in DSFST is very close to that of The NIGHT SKY OBSERVER'S GUIDE (NSOG), although the number covered in each constellation tends to be somewhat different between the two publications. Indeed, I tend to use Haas's book much in the same way I use NSOG; as a list of potential targets which I might want to attempt each time I am out observing. The cover says "More than 2,100 Stellar Gems for Backyard Observers", and that not far from the truth. I have been having a lot of fun on moon-lit nights with my scope just with the book in front of me, trying for any double that may be really tight or might have a hint of color contrast. Using the book, I have run into a few real gems that I had never even heard of, such as the very faint "B" component of the colorful "triple" star Otto Struve 525 not far from the Ring Nebula. The book has even helped me rediscover other double stars that I had long ago forgotten about, so it has been well worth its modest cost. Despite the title of the book, a few of these doubles have occasionally proved a little challenging even to my NexStar 9.25 inch SCT, and with the sheer number of doubles covered, the book has given me a lot to work with.

I would like to have seen a few more tables like "The 10 most colorful doubles", or maybe "Test objects for various apertures", but not including this in the book may have been deliberate. Perhaps Haas has decided to let us do that 'work' ourselves (and thus have our own fun in the process). In any case, I can say that DOUBLE STARS FOR SMALL TELESCOPES is definitely worthy of inclusion in an amateur's 'field library'.