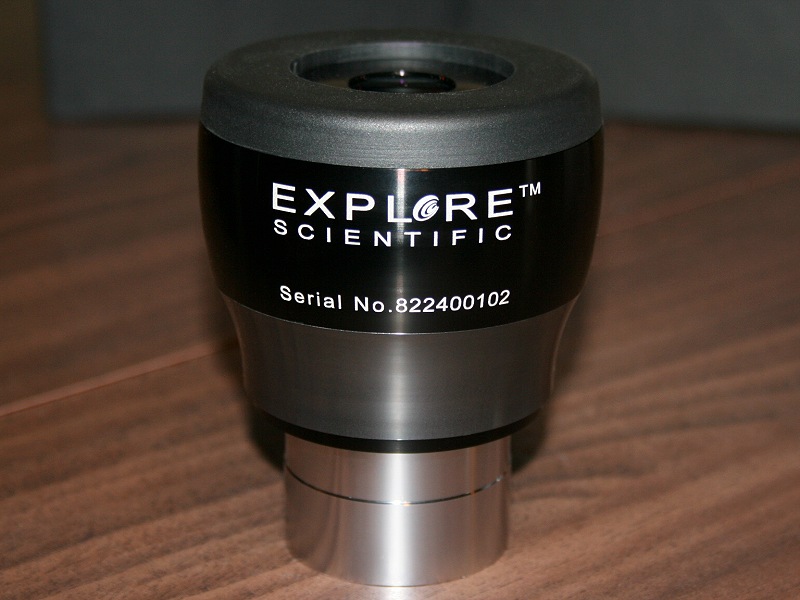 Wide-field eyepieces are all the rage these days, with some offering fairly impressive performance while others simply are not up to the task, especially in shorter f/ratio telescopes. Explore Scientific recently shook things up with their 100 degree apparent field eyepiece series, and now have taken on somewhat more modest fields with their new 82 degree series units. The new 24mm Explore Scientific (ES) 82 degree series eyepiece is a good example of just what Explore Scientific has achieved with the new line for a lower cost than many other wide field designs. 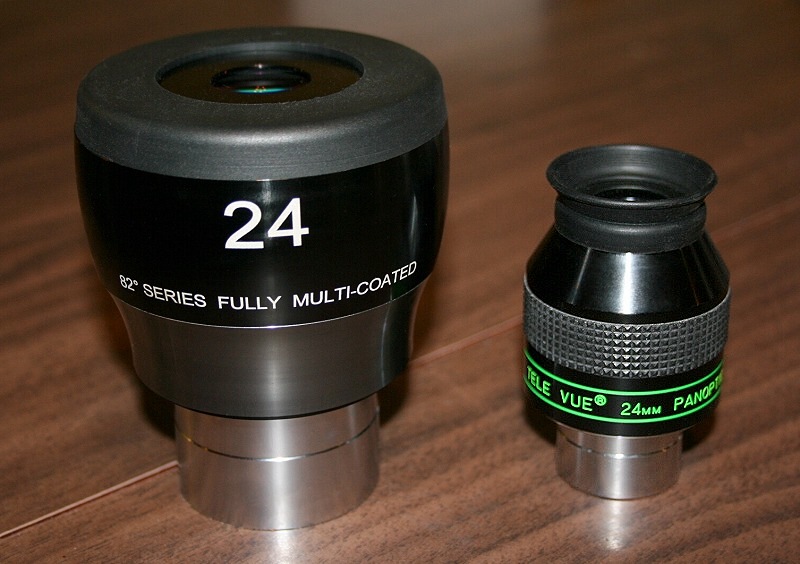 The 24mm ES is a rather broad, massive, and well-built two-inch barrel eyepiece which is startlingly larger than my 24mm Panoptic. In shape, it resembles a large tapered coffee cup that is broad at the top and much narrower towards the base. Indeed, the entire upper assembly consists of a wide variable height flat-topped twist-adjusting eye cup that makes the length of the eyepiece vary from a minimum of 103 mm (four inches) with the eye cup down all the way up to 120 mm (4.7 inches) with the eye cup fully extended. The maximum width is about 90 mm (3.5 inches), and this beast weighs in at a whopping 940 grams (2.1 lbs).  This is similar in mass to the heavy 28mm Uwan eyepiece, so its weight is something to keep in mind when considering its purchase. It is also considerably wider than many 2-inch barrel eyepieces, so it may not fit in your last eyepiece case without some modification. The barrel is chromed, threaded for 2” filters, and equipped with the usual “safety groove”. The field lens is about 36 mm across, while the eye lens is about 22 mm in diameter. The eyepiece has six elements in four groups and has the following measured specifications:

The wide upper-assembly “eye positioner” adjustable eye cup is not really a cup in the usual sense. It and its mechanism occupy the entire top section of the eyepiece (76 mm across at the eye end). It has hard thick slightly deformable material on the eye lens end, and is flat with a 46 mm wide opening in its middle for the eye. With a twist of the large outer housing, this wide “eye-cup” smoothly rises up to adjust the height over a 17 mm range for convenient viewing. However, my friend (John Lammers) and I both found that we only used a small amount of the adjustment travel, keeping the “eye cup” only two to three millimeters from the fully-down position while we observed. This wide eye cup-like device also made the eyepiece somewhat broader than it probably needed to be (it is *not removable*). Indeed, just to look into the eyepiece required a slight sideways turn of the head. With the limited accommodation we needed for viewing and the mechanical complications of making this adjustable eye cup, one has to wonder why something this bulky was put on the eyepiece in the first place. 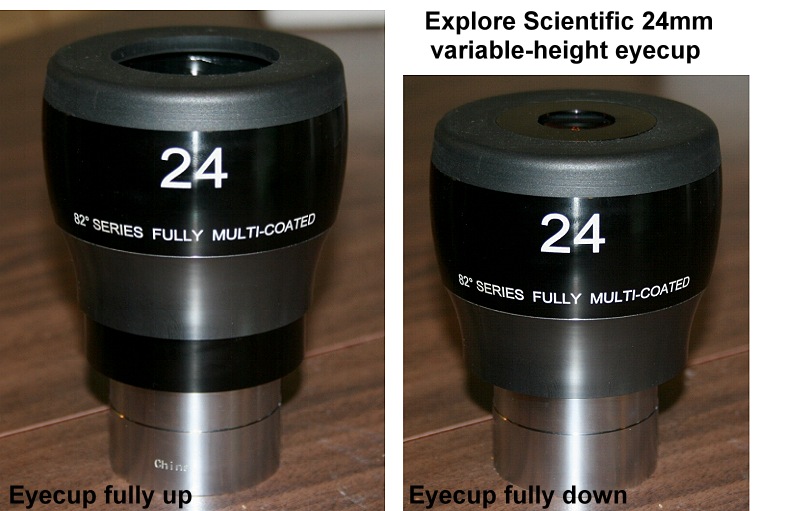 The eye relief of the 24 mm ES is not exactly long, but it is longer than is seen with some other comparable wide-field designs (I could not see the entire field with my glasses on). The bench-test measured apparent field of view was only 80 degrees compared to the 82 degree figure claimed by the manufacturer, but this difference is probably within the variances expected for an eyepiece line. The weight of the eyepiece also tended to be a mild problem with the 2” star diagonals I have for my refractor and SCT. If I didn't make sure that both set screws on the visual back were really tight, the eyepiece sometimes tended to make the star diagonals start to rotate when the eyepiece was not directly over the diagonal. I was definitely glad to have the safety groove on the barrel, but I wondered why Explore Scientific didn't just use a tapered barrel instead. The eyepiece is supplied with two snugly-fitting lens caps, one of which is almost large enough to fit over the dewcap of my 80mm refractor! The eyepiece was also packaged very well in a large box with molded Styrofoam occupying the entire interior, so it was properly protected.

I tested the 24mm ES eyepiece in my 100mm f/6 refractor, my old 10 inch f/5.6 Newtonian, my 9.25 inch f/10 SCT, and John's 8 inch f/5 Newtonian.  All in all, it performed very well, with not a lot negative to say about it (other than its bulk). Star images were pretty much pin-points all across the field except at the very outermost edge, where some lateral chromatic aberration began to show in the form of a short blue inward-pointing “ray” of light, along with maybe the slightest hint of a little astigmatism right at the field stop. The wide 80 degree field was a joy to use on wider star fields in both my refractor and the 8 inch Newtonian. Indeed, I got some of my best views ever of the Veil and Pelican Nebulae with the 24 ES in my friend's 8 inch f/5 with the NPB filter and the Paracorr (49x, 1.69 degree true field of view). It was fun to put the scope on “the Coathanger” and be able to also see the tiny faint open cluster NGC 6802 on the eastern end of the group. Indeed, with filters and John's 8 inch f/5, I spent a lot of time with the 24mm ES on the huge nebula IC 1396, seeing some things I had only seen hints of before in my own scopes. This is a fine deep-sky eyepiece!

Bench tests did show some mild pin-cushion distortion in the 24mm ES, but it was notably less than my 24mm Panoptic eyepiece shows, so I considered it very acceptable. Indeed, the 24mm ES gave John's 20mm Type 5 Nagler a real run for its money. No significant curvature of field or kidney beaning was seen. Contrast was fairly high, but on the crescent moon in the 8 inch, the eyepiece showed itself to be a “haunted” one. A faint but sharp and easily visible ghost image of the moon was seen in the field (about as bright as Earthshine) along with the real moon. The very brightest stars or planets also showed detectable but rather faint ghost images, and on deep-sky, there were no ghosting problems. A few days later with an older moon, the amount of skyglow around the moon made it difficult to see the moon's ghost image, so overall, the ghosting wasn't much of a problem. However, it was a little surprising to see this in an eyepiece that is supposedly “fully-multicoated”. Like the Naglers, the 24mm ES eyepiece did show a little of “the ring of fire” effect of the edge lateral color when the moon was viewed close to the field edge in my SCT, but it was not all that objectionable (I have seen a lot worse). To look for vignetting issues with image amplifiers, we used an Antares 1.6x 2” Barlow with the 24mm ES. The Barlowed eyepiece worked just fine in both the 9.25” SCT and the 8 inch f/5 Newtonian, although much of the time, we used John's 2-inch 2x Powermate for increased image scale.

The Explore Scientific 83 degree field 24mm Eyepiece is a very good performer comparable to wide-field eyepieces such as some of the Naglers, and for the money, it may be hard to beat. Its biggest drawbacks are its size and mass, but in larger telescopes, this may not be as much of a problem. I would have to give it the following somewhat subjective letter grades:

The Explore Scientific 82 degree-series 24mm Eyepiece is a fine performer at a moderate cost. Its size and weight may occasionally make it more difficult to use in small to moderate sized telescopes.