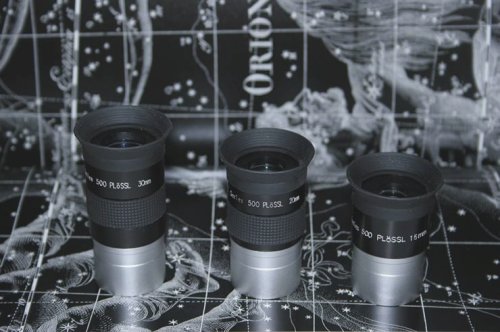 I recently had the opportunity to test three 'house brand' Plossl eyepiece offerings from a New Jersey company by the name of 'J&T Telescope'. I tested their 30 mm, 20 mm, and 15 mm Series 500 Plossl's. There is also a 25 mm in the series.

J&T Series 500 Plossl's are offered at rock bottom prices. Only $25 for the 30 mm, and $22 for all others. For this you get fully multi-coated 1.25” eyepieces, with blackened lens edges, and nice knurled rubber grips on the 30 mm and 20 mm! The multi-coating looks evenly applied, and is green in hue. The baffling in the lower tube assembly is nicely done, and is of a quality flat black. Each eyepiece barrel also has a nice captive set-screw safety grove to aid in keeping the eyepiece from accidentally falling out of the focuser. Full diameter rubber eye cups are standard, but sadly they are a bit too stiff to roll down. They can however with some effort be removed to aid in the use of the eyepieces while wearing glasses. I do not view with my glasses on, so I left them in place during all of my testing. Though the green multi-coating seems to be a general trademark of Chinese made optics, nothing stamped on the eyepieces, or found on the J&T Telescope website indicates the country of origin for these eyepieces,. There is also no mention of their AFOV's. The overall fit and finish of the J&T Series 500 Plossl's is not at the premium eyepiece level, but is not at all bad for the money. They are threaded for filters, and my Astronomic UHC fit each, though with some difficulty in achieving a deep multi turn thread fit (a problem which I have also experienced with many other eyepieces, including some of the most expensive varieties). At least each J&T held the filter tight, and it didn't ever strip, slip, or fall off (as I've also experienced with a good many eyepiece and filter combinations).

Normally I view from the comfort of my back yard, but on this occasion Dave Miller, Phil Hoyle, and I traveled roughly four and a half hours by car to a very nice dark sky site. Dave is a regular here at CN, and Phil is the editor of 'Horizon', the newsletter of the Wilderness Center Astronomy Club, based in Wilmot, Ohio. Our dark sky viewing site is somewhere in West Virginia, though I'm sworn to secrecy as to the specific location. It is an exclusive find which is certified as being “in the black” on the 'Bortle' scale of sky darkness. This means the limiting magnitude is somewhere between 7.1 and 8.0, or in other words the sky darkness is about as good as it gets anywhere east of the Mississippi river. It isn't the far more famous Spruce Knob, but it is essentially just as good, and access is much better.

The main course for this night was Comet Pojmanski, but since it doesn't currently materialize until roughly 5:00 AM, I had ample opportunity to test the J&T Plossl's while waiting for it. A roughly quarter moon presented itself for viewing from first darkness until it set at about midnight, after which the mag 7+ sky blossomed into its full majesty. Transparency was exceptional, and seeing was about a 7 on a 1-10 scale. Both the moon and Saturn offered themselves as perfect early eyepiece test subjects on this night.

The primary test scopes were my 13.1” f/5.23 Truss Dob, and a Dave's 10” F/10 Meade SCT on a Losmandy G-11 mount. It wouldn't be much of a test if eyepieces of known high quality were not present for comparison, so for this test I brought along my trustworthy 30 mm Celestron Ultima, and my likewise well trusted and well appreciated 20 mm and 15 mm Antares Elites. The overall optical quality of my Ultima and Antares contributed heavily to my recent decision to sell several Nagler's Type 5 and 6. Dave clearly trumped my pseudo Masuyama offerings, as he brought along his 30mm and 20 mm true Masuyama's. As to cost differential, the Ultima and Antares eyepieces are roughly 3-4 times more costly than the J&T's, and the Masuyama's are roughly 5-7 times more costly. As is my general habit, all viewing on this night was done with either a TeleVue 2X or 3X barlow, or with my 2.5X Powermate present in the focuser.

The J&T’s (being traditional 4 element Plossl's) are a “scaled” design, so my comments in general can be assumed to validly speak for each of the three I tested, except where otherwise noted. While viewing the moon I was impressed (immediately shocked actually) with the color purity, the freedom from color fringing, and the resolution (sharpness) of the J&T Plossl's. Though they did not resolve quite at the level of the costlier competition (and particularly the true Masuyama competition), they were at least 95%+ as good in this regard across their fields of view in the f/5.23 Truss Dob. If the competition was not there, I could have quite happily viewed all night with the J&T's. Contrast was impressively high for such low cost eyepieces. When comparing the J&T's to the Ultima and the Antares I initially had to swap eyepieces a few times in each focal length before concluding that more fine Lunar detail was being seen on axis in the Ultima the Antares. To my surprise, off axis the sharpness of the J&T's held up fairly well also. Interestingly enough, focal length for focal length they were very close to being perfectly parafocal with my Ultima and Antares eyepieces. Regarding color purity (which in itself is highly subjective as to which hue [if any] is to be considered correct, and is as much within the realm of personal preference as it is of science), the J&T's offered a more pure and clean whiteness reminiscent of that seen in the real Masuyama's, as opposed to the just slightly yellow/brown hues seen in both the Ultima and the Antares eyepieces.

On Saturn, the Cassini Division was satisfyingly quite crisp in the J&T's, and the major band on the planet was pronounced. Edge of field sharpness again held up well, though it was not quite at the level of perfection of the competition. They did not quite “snap” to best focus like the competition, but at best focus, and considering their very low cost factor, the J&T Series 500 Plossl’s truly surprised me in this regard. They also did not exhibit any appreciable level of field curvature, and I therefore did not find myself having the urge to continually re-focus at the field edge. Transmission also held up quite well vs. the competition, proving that the multi-coating was doing a fine job overall. Once again, the color 'tone' of all of the J&T's much more closely resembled the Masuyama's in their high level of whiteness, vs. the others with their more earthy and slightly yellow/brown tone.

With Saturn or the moon placed just outside of the FOV, the sky in the J&T's was clearly not as dark as that seen in the others, and it looked particularly gray in comparison to the real Masuyama's, which overall were jet black in their backgrounds. However, no tendency to flare or ghost was seen in the J&T's (but one must remember that we were in about as dark a sky site as can be found, so annoying stray light was simply not present to tax the issue, or to potentially reveal other coating or baffling related problems).

The J&T's required a higher level of attention with regard to keeping the eye positioned closely along the central axis than did the competition. Their eye lens diameters in comparable FL's are not nearly as large as the competitors we chose. Therefore, they tend to black out more easily if ones pupil drifts very far from the center line. I initially felt that this tendency was likely being compounded by my insistence upon barlowing, as barlows are well known to increase black-out related issues, but it persisted even when the Powermate was in the focuser.

There were additional and more serious negatives to the J&T's. Some mild light scatter surrounded Saturn in all of the J&T's, though this was not evident at all in the competition. Also, in both the SCT and my Dob the 30 mm and 15 mm J&T's oddly appeared to have very narrow FOV's compared to the Ultima, Antares, and Masuyama's (with the latter trio having claimed 52 degree AFOV's). This unexpected FOV difference was appreciable. Though no ratings of the AFOV's are offered by J&T, one naturally assumes 50 degrees of AFOV for standard 4 element Plossl's. However, with both the 30 mm and 15 mm J&T's I immediately thought I was looking through a set of Ortho's instead of Plossl's, and Dave concurred. Though the 20 mm J&T also displayed a slightly lessened FOV vs. the 52 degree AFOV 20 mm Antares and 20 mm Masuyama, the difference in the field of view here was not nearly as pronounced. 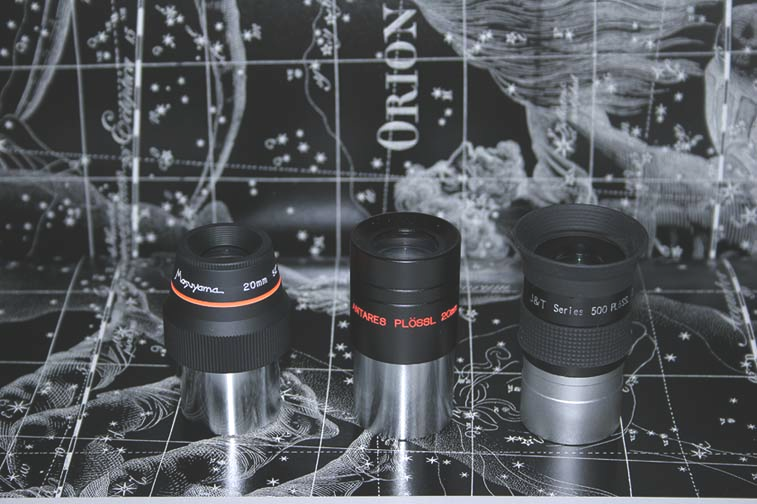 When we got home, I took the bottom tube section off of each of the J&T's, the Ultima, and the Antares, and I carefully measured the field stops of each with dial calipers, repeating the measurements several times from multiple points of entry. I then calculated theoretical AFOV's from the eyepiece field stop measurements. For all eyepieces I then assumed an additional 4% of AFOV due to pincushion, which I believe is a fair assumption for Plossl's in general. The chart I present below reveals why Dave and I felt that the FOV was amiss in the 30 mm and 15 mm J&T's. They are indeed FOV challenged due to their sub-standard field stop diameters. This led me to re-evaluate the reasoning behind their capability to hold up reasonably well with regard to edge of field sharpness against the tough competition. For these two J&T Plossl's the field edge is not nearly as far out as it is for a standard Plossl, and this naturally leads me to wonder whether their edge of field performance would have suffered much more than it did if they had properly dimensioned field stops for their respective focal lengths. 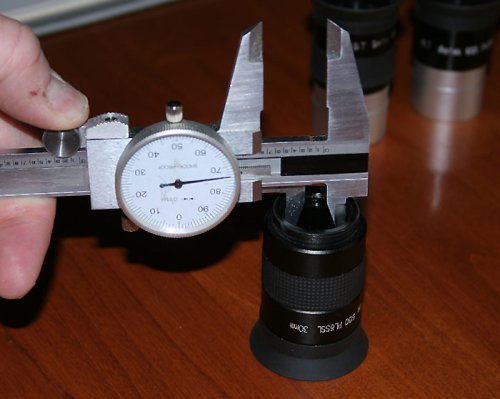 In conclusion, Dave and I determined that a set of J&T Series 500 Plossl's would make good eyepieces to have along for star party viewing, or perhaps in the case where more costly eyepieces are currently out of the question. If one is restricted to budget eyepieces, and can tolerate the restricted FOV of both the 30 mm and 15 mm J&T Series 500 Plossl's, viewing through them will be quite acceptable overall. However, this pronounced defect makes using them (particularly barlowed) in non-driven scopes like my Dob a bit of a struggle, and for this reason alone I can not recommend these two focal lengths for use in any “push it yourself” scope. The 20 mm however is easily the best of the J&T Series 500 Plossl’s that I tested (with due consideration that the 25 mm was not available for me to test), as it is not hampered by a dimensionally challenged field stop. The J&T Plossl’s hold up well at least down to F/5.23, and this is not often the case for much of the low priced competition (and particularly that of the ‘wide field’ variety).