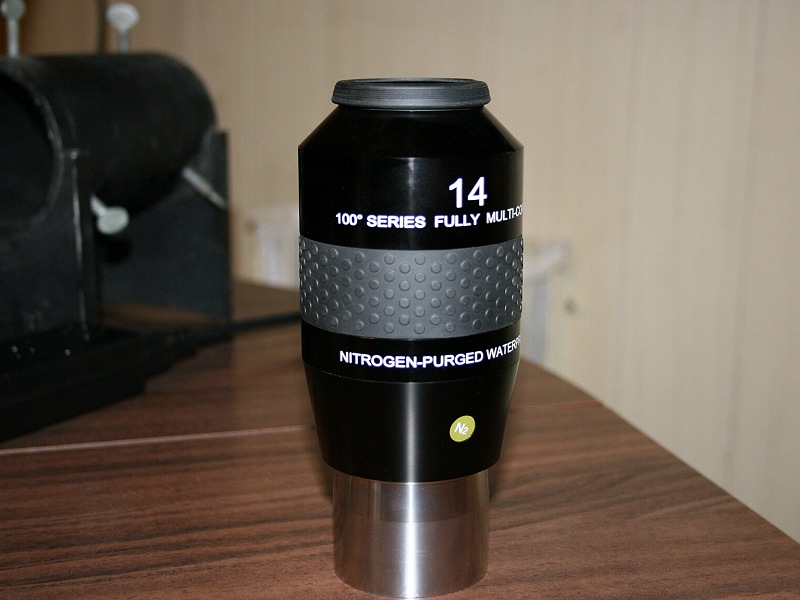 Not long ago, most amateurs were dubious of the claims about the maximum apparent field of view that an eyepiece might possibly give without giving up a lot of performance. With the Nagler revolution, the fields went past 80 degrees providing a sort of “spaceship window” effect on the better ones and a “starship going into warp” effect for those of simpler design. For a while, it seemed like something close to 85 degrees might be kind of an insurmountable barrier for retaining quality star images. However, Al Nagler and Tele Vue blew that barrier down with the introduction of the fantastic Ethos eyepieces with their 100 degree apparent fields. It was probably only a matter of time before someone else attempted to match that level of performance, and sure enough, Explore Scientific has now put the amateur astronomy community into a tizzy with their new 100 degree Series 14mm (ES 14mm) eyepiece. While not quite equal to the Ethos, it does offer very fine ultra-wide apparent field of view performance in a package which is a bit less expensive than some Ethos eyepieces.

The ES 14mm: This is a large 2-inch barrel 9-element wide-field eyepiece that truly does have an apparent field of view that is one of the widest in existence. The eyepiece is a massive beast that is about 6.25 inches long and 2.75 inches wide. It weighs in at a whopping 856 grams (1 lb, 14 oz.), which is a bit heavier than the 13mm Tele Vue Ethos, but lighter than the 31mm Nagler. This weight will be a significant factor for those who wish to use the eyepiece in Dobsonians that are not well balanced or which move in altitude easily. The eyepiece is one solid unit made mostly of black anodized aluminum, with slightly conical ends and a 2-inch standard barrel which is tapered for safety rather than just undercut. The body section has a wide knurled rubber section for better gripping action. The eyepiece comes with an extendable rubber eyecup as well as standard threading for filters on the barrel. Using my crude optical bench and drift testing, I came up with the following approximate specifications for the ES 14mm eyepiece:

When shaken, the eyepiece showed no noise or looseness and the surface of the eyepiece housing was smooth and unblemished. The lettering on the eyepiece was clear and sharply engraved, so it should stand up to a lot of use. The Nitrogen purging to make the eyepiece 'waterproof' was not tested. I had no trouble threading my 2” filters into the ES14, and the tapered barrel was more convenient than the usual “safety groove” undercut used for some eyepieces to help prevent them from falling out of a focuser. The optical surfaces all appeared to be coated with no variations in the coatings noted visually. In short, this appears to be a very well-built eyepiece.

Performance: I tested the 14mm ES in my 100mm f/6 refractor, my NexStar 9.25 inch f/10 SCT, and a friend of mine's 8 inch f/5 Newtonian. To cut to the chase, this isn't exactly an Ethos, but it is one very fine eyepiece that offers more “Nagler-like” performance in field notably wider than a Nagler's. Star images were pin-point quality across almost the entire field of view. The only exception was at the very outermost part right next to the field stop, where a minor amount of astigmatism was detected. I saw no signs of any significant curvature of field. On really bright stars, a small amount of lateral color was seen for stars near the field stop, and on the moon, the edge of the field along the field stop showed a faint bluish tinge. The eyepiece also showed some pin-cushion distortion which was not quite as much as is seen in a few wide-field eyepieces, but was still notable. The 8mm and 17mm Ethos eyepieces I have used showed little in the way of these aberrations, so it is clear that this 14mm is not quite an Ethos. However, I still considered the 14mm to be yielding very fine performance for an eyepiece with such an enormous apparent field of view. Indeed, the field of view was so wide that most of the time, I didn't really notice much in the way of significant degradation at the field stop. The eye relief is somewhat limited, which meant that I had to take my glasses off and push my eye into the eye cup a little to see the field stop. On the moon and planets, the views were sharp and the contrast was pretty good, although on the moon, the eyepiece seemed to give a very slightly “warm” hue to the lunar surface. This “warming” effect was less than I see with my old 14mm Meade Ultrawide, so again, the ES 14mm was still performing very well.

In my SCT, the wide field made objects seem to “float” in the field as if I was in space itself with none of the restrictions of an eyepiece visible. M11 was particularly stunning, as even at 168x with the ES 14mm, it was framed against the wide rich background of the outer parts of the Scutum starcloud. Globulars were also very nice, although I might have used a low-power Barlow with the Es 14mm for better effect. In my 100mm f/6 refractor, the view of the Double Cluster showed the circular outer halos of very faint stars which surrounds the core of each group, despite some bright moonlight interfering. This impressed me, as those outer halos can be somewhat challenging to see even in a dark sky. The ES 14mm was definitely outperforming my old Meade 14mm Ultrawide both in field size and overall quality.

Summary: Overall, what do I think of the Explore Scientific 100 degree 14mm eyepiece? Well, I might call it “a Nagler on steroids”, as its performance, in many ways, does remind me somewhat of that of some of the Naglers. I give the ES 14mm the following letter grades:

Field of View: A+

Curvature of Field Correction: A+

It certainly is an outstanding “mega-field” eyepiece that many amateurs will find meets or exceeds their needs, so I can highly recommend it. Indeed, the ES 14mm “waterproof” eyepiece ranks as one of the finest eyepieces that I have ever used. However, for those who still want that little extra “edge” in wide-field performance, the Tele Vue Ethos still, at least in my mind, probably remains top dog when it comes to 100 degree apparent field eyepieces.

Conclusion: the Explore Scientific 100 degree Series 14mm Eyepiece is a very fine wide-field performer at a price that is somewhat less than that of a similar Tele Vue Ethos eyepiece. Despite the price, I consider it to be well worth the money.