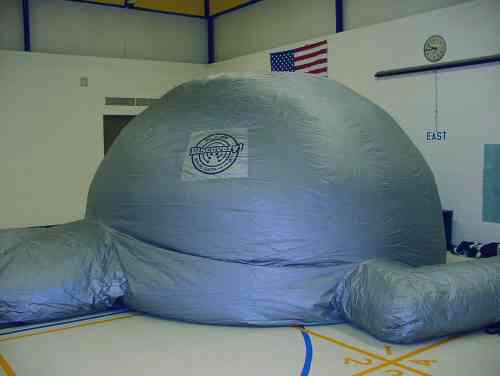 Imagine that you have the ability to walk into a room at anytime and see the night sky. Imagine having your own personal planetarium. Now imagine that it is portable, and will easily fit in any car and you can take it anywhere you want to go. And to top it off it is so easy to setup and use that you can train anyone to set it up and operate it in under an hour.

I recently was lucky enough to be able to use a Starlab portable planetarium (http://www.starlab.com) from Learning Technologies Inc. with George E. Greene Elementary - one of our local grade schools. The Midland Center for the Arts (The Hall of Ideas) - http://www.mcfta.org/main.html (follow the Hall of Ideas link) has a standard Starlab that they rent or check out to schools in mid-Michigan. Don Martin is the wonderful individual who does the training, and is also available to be "rented" out. If you work for a school district (teacher or administrator) and agree to undergo the training, you can use the Starlab with your school for one day for free. There is a small fee if you want to rent Don as well (I hear he puts on a very nice show).

We ran an entire grade school through in about a day and a half, doing 25 minute shows for each class. Talk about a marathon! It was a blast for me, the teachers and the students.

The StarLab is basically a large dome tent that is inflated with the use of a regular box fan (just like one you would by at Wal-Mart), and a cylindrical projector that projects the stars or other figures on the inside of the dome walls. It is very simple to put up, operate, and take down and Don's training session only lasts about an hour. As a plus, the whole thing (including projector) will fit into just about any vehicle for easy transport. 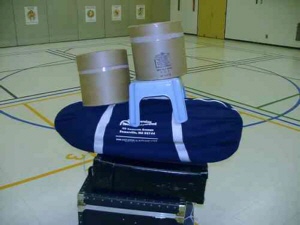 The dome comes packed in its own duffle bag, and the first thing you do is take it out and unroll it on the floor. There are two tubes that lead into the dome. One is the airlock / entrance, and the other is the tube that connects to the fan. There is no bottom on the dome, it simply curls under somewhat to keep the air in. Once it's unrolled and the fan is hooked up it only takes about 5-10 minutes to inflate. The basic dome is about 16 feet across, 10.5 feet high and weighs about 45 lbs. The dome holds about 25 adults or 35 children (according to the manufacturer - I found that about 18 adults or 25-30 kids were a little more comfortable - sort of along the lines of those dome tents that "sleep" three). You enter the dome through a tube that serves as an airlock. The airlock is low to the ground, but you don't have to crawl, merely bend over (although most of the kids preferred to crawl).

If you have an individual who can not enter the dome through the entrance tube, you can simply pick up the side of the dome and let them in that way. The dome does deflate some when people are crawling in and out, and you will want to make sure that the inflation tube does not get closed off, but generally this wasn't much of a problem. The dome re-inflates very quickly. The dome seems very durable, but they do give you a patch kit for any holes that somehow make their way into it. Whatever the material is (it looked like duct tape!), it is very good at blocking light, but we found we had the best results when we turned of the lights in the room containing the StarLab as some light will travel down the entrance tube otherwise. 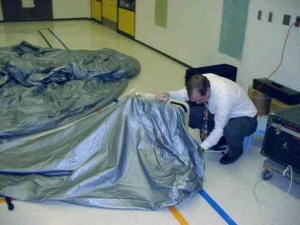 Unrolling and Inflating the Dome

While the Dome was certainly neat to watch inflating, and the kids had a great time inside, the star of the show is clearly the projector - no projector, no stars! The projector is basically a lamp with a projection cylinder on it. The cylinder contains the figures or stars you wish to project on the dome. The projector is VERY simple to operate, only having two knobs - one to bring up the house lights (lights to provide illumination on the outside of the projector), and one to control the brightness of the stars. Once the dome is inflated, simply pick up the side and slide the case containing the projector in. The case will double as a platform to set the projector on inside.

To provide light inside while we were setting it up, we used one of those twisty flashlights draped around your neck. It worked very well. You only have to run one power cord in (two if you want music), and the projector sets up in about 2 minutes. The only drawback to the projector was that the tiny bulb that was responsible for the stellar projection needed to stick above the lamp to be effective. If teachers were not careful when changing cylinders they could (and did) bump the light bulb, knocking it below the lamp "shade". Then we had to disassemble is and reposition the bulb. This only took about 5 minutes so it really wasn't much of a problem. The cylinder was sometimes a pain to change, as it was occasionally somewhat tough to align the cylinder to the lamp unit. This did get a little easier with practice. The projector (with the appropriate cylinder) was able to display the southern skies to around 70 - 75 deg south, moon phases, the position of the sun in the sky at different times of the year, and the naked eye planets. You could also adjust the time of year and day or night, and the projector also had a daily rotation motor to simulate the motion of the sky over the course of time. 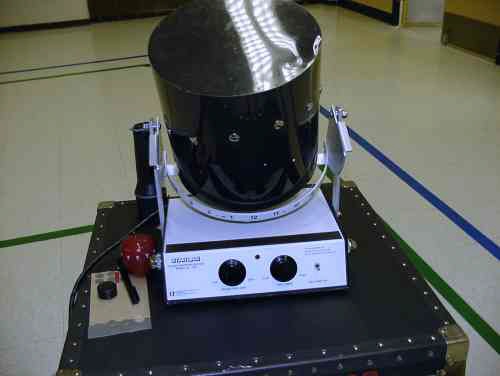 The projector (complete with cylinder) sitting on its case.

The cylinders contain the images that you are going to project on the walls of the dome. Our unit had the basic night sky (stars to about mag 5.5), as well as the Greek, American Indian, and Chinese constellation figures. In addition to these you can also get cylinders to display the following for astronomy: the solar system and galaxy, an urban starfield with a reduced number of stars displayed (although you could just reduce the projector illumination to get much the same effect), deep sky objects, Rey's constellation figures and celestial coordinates. In addition, there are eight different mythologies - Greek, Native American, two different Chinese cylinders, Hindu, African, Egyptian and Lapp. Outside of the astronomy and mythology cylinders, they also have cylinders on ocean currents, weather, plate tectonics, longitude and latitude, the inside of a cell and even a blank cylinder so you can make up your own items. Many of these come with lesson plans to help a teacher prepare for using the dome. Although the cylinders looked fragile, they are in fact surprisingly robust - which is good because in a darkened dome they tend to get dropped and kicked a fair amount.

The kit from the Hall of Ideas comes with a couple of white flashlights, a couple of red flashlights, a laser pointer, some spare bulbs and batteries. I would suggest adding a timer to let you know how long you have been in there, because time tends to fly under the dome.

Just in case you can't think of ways to use it yourself, or if you are looking to get even more use out of it, the StarLab people do offer a number of prepared lesson plans for grades k-12, as well as a detailed manual about the StarLab itself.

After we had a chance to play with it for a couple of days, the elementary principal (Pete Batzer) and myself have decided that we need to look into getting one of these for our district. The easy setup, transportability, curricular enrichment possibilities and extreme flexibility of the system is what sold us on it. Unfortunately, these systems are rather expensive so we intend to seek grant funding. Anticipating this need, the StarLab people have an in-house grants specialist (along with a fair number of other resources) that they keep on hand to assist schools and others seeking to fund a StarLab of their own.

We chose to bring in the StarLab because this was reading month at one of our local grade schools (George E. Greene Elementary in Bad Axe Michigan) and the theme was astronomy. We thought it would be an excellent way to introduce children to the night sky.

Our typical program was to bring the students into the dome, and show then the night sky from a major city, move to a smaller city and then into the country. I did this to discuss why more stars can be seen in the country than the city even though the stars are there all the time. This of course was basically a discussion about light pollution, and we taught them what it is and what it does. You should have heard the excited cries when we took them out of the city into a dark country night. That was enough to make my day right there.

After we had the students in the country, we showed them how to locate the big dipper, the north star and a couple of prominent constellations. They saw graphically why the north star is special - not because it's the brightest star in the sky (it isn't), but rather how everything else moves around it in an endless dance. I showed them how to find and get a Bear out of Ursa Major, a hunter out of Orion, a dog out of Canis Major and a lion out of Leo. I then showed them the two stars that make up Canis Minor and asked them to use their imagination to see if they could come up with a puppy dog. After a few minutes of playing cosmic connect the dots, we then talked about ancient cultures, and how we got most of our figures in the night sky from the Greeks. Then we put in the Greek myth cylinder. The excited cries as Orion and the others came into view superimposed on the night sky are something that I won't forget for a long long time. All too soon, each group moaned in disappointment as their time was up and they had to make room for the next class. On the second day, I had a couple of the classes return for a second expedition and we took a few different requests. (For example, we looked at the path of the sun on both the longest day of the year and on the shortest day of the year.) The best part (for me) was when a couple of young first graders told me that he found the big dipper, Orion and his big dog in the sky last night.

We are already planning on seeking a grant to try to obtain one of these for our district, and/or bringing it back from the Hall of Ideas next year.

If you are in Mid-Michigan and wish more information about bringing the StarLab to your school or organization contact:

Tom Trusock is the Director of Technology for Bad Axe Public Schools located in the middle of Michigan's thumb, and has been an amateur astronomer for many years. He is currently trying to talk his wife into letting him buy his own personal StarLab, but expects he will have to seek grant funding.