Binocular Universe: A Clearing in the Clouds 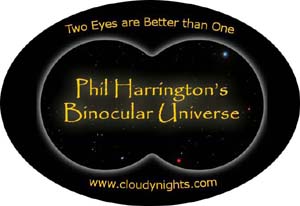 A Clearing in the Clouds

Unlike most constellations, many of which can trace their origins to the dawn of civilization, Scutum the Shield was created as recently as 1690.  That year, the astronomer Johan Hevelius proposed drawing a shield among the faint stars found just south of in honor of John Sobieski, a pivotal figure in 17th-century .  Sobieski reigned for 22 years as King John III and is best remembered in history as a brilliant military commander.  His most famous victory was over the Turks during the Battle of Vienna in September 1683.

Although the brightest stars of Scutum shine weakly at only 3rd magnitude, the combined background glow of uncountable faint suns blur together to create one of the richest Milky Way fields in the sky.  The Scutum Star Cloud, as it is called, is a beautiful area to scan with binoculars.  The American astronomer E.E. Barnard rightfully called it "the gem of the Milky Way."

The name is deceiving, however.  The Scutum Star Cloud is not a physical cloud of stars at all.  In reality, it is quite the opposite!  The "cloud" is actually a clearing in the obscuring interstellar dust that otherwise blocks our view into the depths of the Milky Way.  If you think of these dust clouds as curtains that are drawn over much of the Milky Way, Scutum is an open window.

The view through binoculars, especially 7x and 10x wide-field glasses, is simply overwhelming on a warm, dark summer's eve.  There are more stars framed within the Scutum window than can possibly be resolved through binoculars.  Instead, their light gently blends into a soft glow peppered by myriad points of light.

If you have fairly sharp color perception, you should see hints of orange, yellow, and blue starlight sprinkled throughout.  Try slightly defocusing the view to bring out the subtle colors in the stars.  Bob Patrick (BobinKY of the CN Binocular Forum) recommends the following:

There are several sights within the "Scutum Star Window" that are prime binocular targets, but the best by far is M11, an extremely dense open star cluster.  Discovered by Gottfried Kirch in 1681, M11 is made up of as many as 2,900 individual suns crammed into an area no more than 24 light years across.  At first glance, it looks more like a globular cluster, with a brighter core surrounded by a dimmer outer edge.  Studies have proven conclusively, however, that M11 is indeed composed of young stars, a characteristic of open clusters.  Globular clusters consist entirely of very old stars with traits that are noticeably different from those found within M11.   More than 600 of M11's stars shine brighter than 15th magnitude, but only a lone 8th-magnitude rebel is bright enough to be seen through most binoculars.

Ed Zarenski (EdZ, moderator of the CN binocular forum) paints a more detailed view through his 25x100 giant binoculars.  "M11 is very large and appears as an east-pointed wedge with one or two bright stars at the east tip of the wedge. There is obvious resolution in the cluster that becomes even more obvious with averted vision."  If you can, try to compare the view through several pairs of binoculars and see what differences you can spot.  Can you see his "wedge?"  If so, it should be clear why this cluster is nicknamed the Wild Duck Cluster, for its resemblance to a flock of flying ducks.

Zarenski also points out that M11 "is right next to a pair of double stars and the variable R Scuti."  The binaries of which he speaks are Struve 2391 (also listed as Ó2391 and STF various references), with magnitude 6.5 and 9.6 components separated by 38", and H 50 at magnitudes 6.0 and8.1 split by 113".  Both are to the northwest of M11 and should be resolvable in 10x50s given reasonably dark skies.

For variable star fans, R Scuti fluctuates in brightness from magnitudes 4.5 to 8.8 across 140 days.  Discovered by the English observer in 1795, R Scuti is classified as an RV Tauri-type variable.  These pulsating yellow supergiants are thought to represent a missing link in stellar evolution between Cepheid variables and long period, Mira-type stars.   R Scuti bottomed out last month and is now on the upswing toward its next maximum toward the middle or end of August.  If you have never watched a variable star, download a chart for R Scuti from the American Association of Variable Star Observers's (AAVSO's) web site at http://tinyurl.com/r-scuti and enjoy the show.

Although the Scutum window is mostly clear, there are a few cobwebs of dark nebulosity that spoil small portions.  Spotting these dark nebulae takes a little getting used to, however.  After all, what's the first thing you consider when deciding whether to search for a new object?  Its apparent magnitude, right?  Clearly, this isn't going to work with dark nebulae, since now, it's what you don't see that counts.  Rather than magnitude, dark nebulae are rated on a 1-to-6 scale according to their contrast or opacity.  The darkest dark nebulae rate a 6, while the least rate a 1.

Due to their low contrast, dark nebulae require very dark, very transparent skies to be seen.  Contrary to popular belief, however, large optics are not needed.  Many can be seen through binoculars or even with just the unaided eye.  The key to success is a slow scan of the nebula's region.

The most obvious dark nebulae in Scutum are Barnard 111 and Barnard 119a.  Both are found to the north-northeast of M11.  Visually, they strike me as large, kidney-shaped patches that almost touch each other at their southern tips.  Barnard 111 forms the northeastern edge of the Scutum Star Cloud and appears many times larger than Barnard 119a in photographs.  Look for a "peninsula" of about half a dozen 8th- to 10th-magnitude stars wedged between the nebulae, as well as an L-shaped asterism of stars just north of B119a.  The center star of that asterism looks orangish through my binoculars.