On , the solar system became a little more crowded.  That night, the Sicilian astronomer Giuseppe Piazzi stumbled upon the first asteroid, which he named Ceres after the Roman goddess of grain.  Now reclassified as a dwarf planet by the International Astronomical Union, Ceres was the first object discovered to be orbiting the Sun between Mars and Jupiter. 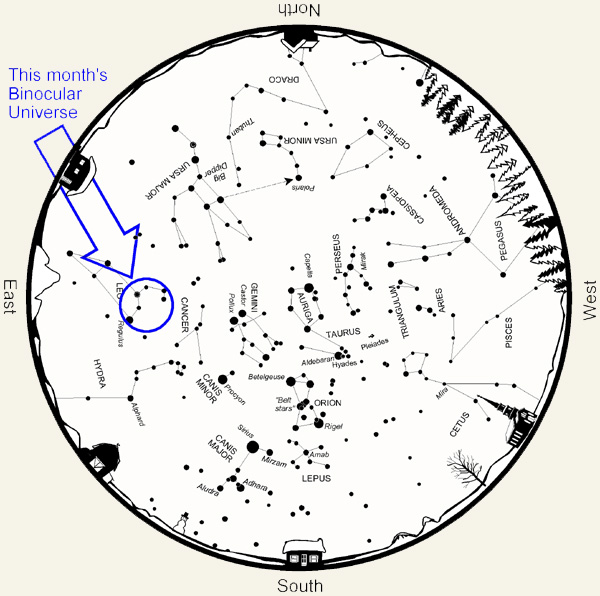 Above: Winter star map from Star Watch by Phil Harrington

Surprisingly, even though Ceres is the largest object in the asteroid belt at about (960 km) across, it is not the brightest.  That honor goes to Vesta, the fourth asteroid discovered.  Vesta was found March 29, 1807 , by the German physician Heinrich Olbers.  Olbers had also discovered the asteroid Pallas two years earlier.

Although oblong Vesta only averages about (

These mysteries, and more, are part of the reason why NASA launched the Dawn spacecraft in September 2007.  Dawn's mission is to explore both Vesta and Ceres.  As it stands now, Dawn will arrive at Vesta in August 2011 and spend the next 9 months in orbit.  It is then due to leave Vesta in May 2012 and move on to Ceres, arriving there in February 2015.

Have you ever seen an asteroid?  If not, now is a perfect opportunity -- no telescope required.  Vesta will be visible in your binoculars all month and throughout spring.

For the past few months, Vesta has been floating through the constellation Leo.  The asteroid reached opposition on February 17–18, when it shone at magnitude 6.1.  As March opens, Vesta will have dimmed ever-so-slightly to magnitude 6.2.  As March marches on, Vesta’s brightness will slip to magnitude 6.5 by midmonth and to magnitude 6.8 by the end.  Next month, even as April showers hide the sky, Vesta will continue to fade slowly, reaching magnitude 7.3 by May 1, and finally dimming to magnitude 7.7 by June 1.

Spotting an asteroid -- even the brightest -- can be like hunting for a celestial needle in a haystack.  The word "aster-oid" tells why: aster-: star, -oid: like, or similar to.  Asteroids look just like stars.  The only way to tell them apart is to follow them as they move against the stationary backdrop.

To find Vesta for yourself, use the chart here.  Vesta's position is marked every 7 days beginning on March 1 and continuing until the end of May.  Each night, concentrate your search on where the asteroid is predicted to be.  Once you spot the field, accurately sketch all of the stars.  By glancing back and forth between your field drawing and the asteroid's finder chart, you can see pretty readily which point is Vesta.

Be sure to follow Vesta's path through Leo throughout the spring, plotting its position on the chart each time you spot it.  In the end, you'll have a complete record of Vesta's 2010 apparition. 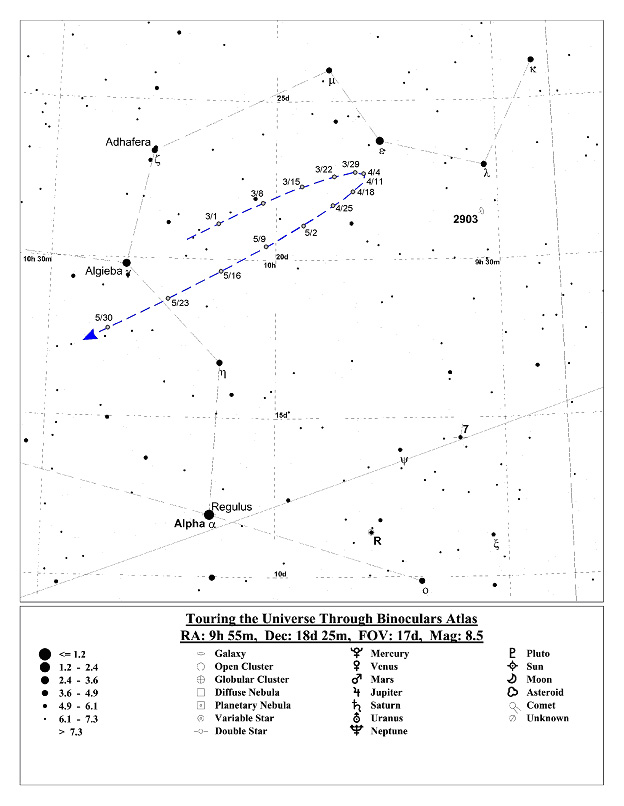 Above: Finder chart for this month's Binocular Universe.  Chart from TUBA, www.philharrington.net/tuba.htm

While you are tracking Vesta, also follow the variable star R Leonis.  Of course, the star isn’t moving in the sky like Vesta.  It’s anchored rock solid 6° due west of Regulus and just to the south of 19 Leonis.  But its brightness “moves,” or changes noticeably.  Over the course of 312 days, this red giant fluctuates between about magnitudes 5.8 and 10.0 as it expands and contracts, almost beating like a human heart.  The vibrant reddish glow of R Leonis also contrasts beautifully with two nearby stars to its northwest, bluish 19 Leonis and golden 18 Leonis.

March begins with R Leonis hovering near its minimum brightness, but it will be on the upswing over the next few months.  Based on past observations, the star should crest near maximum magnitude in July.  So, now is the perfect time to begin to follow the star's performance and create your own light curve.  If you would like to monitor the star's fluctuations, use the chart below, which was created with the Variable Star Plotter on the American Association of Variable Star Observers' (AAVSO's) web site, http://www.aavso.org/observing/charts/vsp/index.html

You can successfully estimate the unknown magnitude of a variable to an accuracy of 0.1 magnitudes by comparing it to neighboring stars of known brightness. I like to call this process visual interpolation.

Let's say that when you find R Leo one night, it appears brighter than the nearby star labeled 88 (indicating that its magnitude is 8.8 – we always omit the decimal to avoid confusing it for a field star), but fainter than the magnitude 8.3 (83) star.  So, therefore, R’s magnitude must be somewhere between 8.3 and 8.8.  Next, check it against the magnitude 8.4 (84) comparison star to the north and perhaps with the 8.7 star further north still.  If R appears halfway between the 83 and 88 stars, then your guesstimate for its magnitude will be around 85 (that is, magnitude 8.5); if it's closer to the 87 star, then your estimate might be 86, and so on.  By comparing the variable to two stars of known fixed brightness, one brighter and one fainter, an accurate reading may be made.

By following the antics of Vesta and R Leo, you have a couple of ongoing observing projects that will run through the spring and show just how dynamic this universe of ours really is.  But if you need even more to look at, here are some additional targets within this month's binocular universe:

Be sure to try for NGC 2903 while you are in the area.  How Messier could have missed this outstanding spiral galaxy beats me, since it shines at magnitude 8.9.  Look south of Lambda Leonis for a faint, oval smudge highlighted by a brighter central core.

Have a question, a comment, or a suggestion for future columns?  I'd love to hear it.  Drop me a line at phil@philharrington.net or post it in the discussion forum.

Until we meet again under the stars in April, remember that two eyes are better than one.