Binocular Universe: A Whale of a Tail

Our autumn sky contains a large void of bright stars southeast of the Great Square of Pegasus and southwest of the rising Pleiades and Taurus, the Bull. That abyss is home to the dim points that form the constellations Cetus, the Whale, and Pisces, the Fishes. This month, we'll examine this lonesome region to fish out a few underappreciated binocular targets. 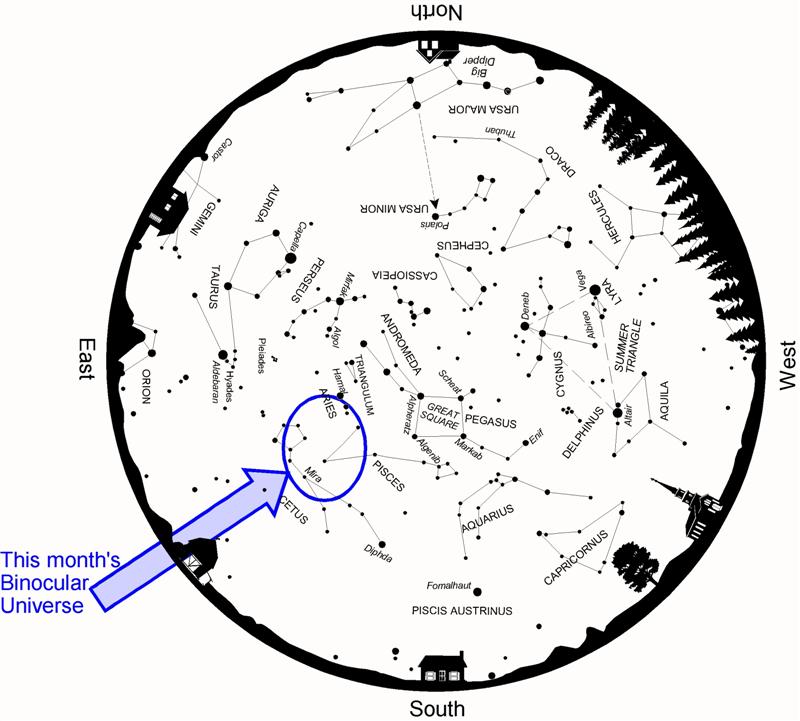 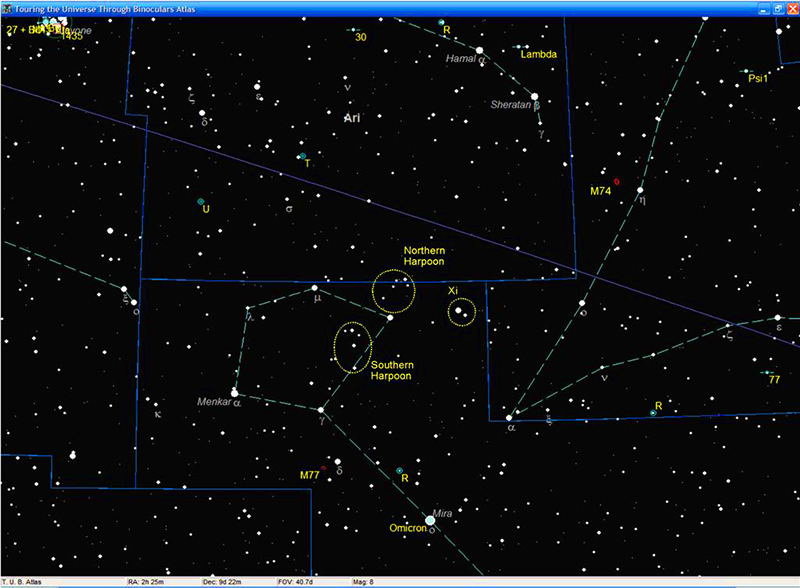 Above: Finder chart for this month's Binocular Universe.  Chart adapted from Touring the Universe through Binoculars Atlas (TUBA)

Cetus is a large constellation riding along the southern portions of the November evening sky. Trying to spot its vague form can be a real challenge, especially from suburban and urban observing sites. The constellation's brightest star, 2nd-magnitude Diphda (Beta Ceti; aka Deneb Kaitos), lies low in the southern sky for most of North America and Europe. Third-magnitude Menkar (Alpha Ceti) is the brightest star in the northern portion of Cetus, marking one of the corners in the whale's five-sided tail. If you have trouble finding the stars of Cetus, try waiting until the winter constellation Taurus is up in the sky. The V-shaped head of Taurus points more or less toward the whale's tail.

Once you spot the whale's pentagonal tail, take a look for 4th-magnitude Delta Ceti just to its south. Aim your binoculars its way and then look for 6th-magnitude 84 Ceti. Our first target, 9th-magnitude galaxy M77, forms a right triangle with Delta and 84. You will also see a pair of fainter stars just to the northwest of M77. M77 will look like a dim, oval glow perhaps highlighted by a central core if you are viewing through giant binoculars.

Indexed as an Sb spiral galaxy, M77 is the prototypical "active" galaxy, called a Seyfert galaxy. Seyfert galaxies, named for their discoverer, American astronomer Carl Seyfert, have star-like nuclei and intense, variable radio noise emissions. By studying its spectrum, astronomers conclude that giant clouds of gas are erupting from M77's core, moving at several hundred kilometers per second. Astronomers have found that the source of these eruptions is likely a supermassive black hole measuring less than 12 light-years in diameter yet containing about 10 million times the mass of our Sun.

With the coming of the holiday season next month, we often look forward to repeating annual traditions. One tradition enjoyed by many is watching the movie It's a Wonderful Life, starring Jimmy Stewart and June Lockhart. We might use a slight variation of that title to highlight our next target: It's a Wonderful Star. The star Mira (Omicron Ceti), south of M77 and the Whale's tail, was named by Johann Hevelius in 1662. The name translates as "wonderful," an apt appellation indeed. Over 332 days, Mira slowly cycles between a maximum brightness of 3rd magnitude to a low of about 10th, and back again. It's a wonderful star to enjoy through binoculars, especially when near maximum, as its reddish color helps it to stand out from the crowd.

It was probably at one of those peak performances that Hipparchus became the first person to spot it. That was back in 134 B.C. Its recognition as a variable star, however, is credited to amateur astronomer David Fabricius, who spotted it on August 13, 1596, and again on February 15, 1609. There have been instances, however, when it exceeded 1st magnitude and others when it never broke the 5th-magnitude barrier. Variable stars can be notoriously unpredictable.

One reason for this inconsistency may be because Mira is the more massive member of a binary star system. Although we can't see it through binoculars, or for that matter even through all but the largest telescopes, Mira has a white dwarf companion star. This companion lies some 70 Astronomical Units (that is, 70 times the average distance from Earth and Sun) from Mira itself and takes about 4 centuries to complete an orbit. As it does, the white dwarf's strong gravitational pull draws material from Mira into a surrounding accretion disk.

Our timing this year is not the best, unfortunately. Mira passed maximum brightness last July and is now heading toward a predicted minimum next February. But have faith. Just as Jimmy Stewart's character George Bailey returned to the town of Bedford Falls in the movie, Mira will also return from the depths come next fall.

Let's enjoy three fun asterisms near Cetus' tail that are sure to delight. The first two, which are plotted on the finder chart here as the Northern Harpoon and the Southern Harpoon, are formed from two curved rows of stars. The eight stars forming the Northern Harpoon extend just over the border with Aries and range between 6th and 7th magnitude. Xi Arietis is the brightest of the bunch. The shape of the Southern Harpoon is somewhat more pronounced. Its six stars range from 5th to 7th magnitude, with Nu Ceti as the brightest.

The third asterism plotted on our chart comes from John C. Raymond's book Asterisms for Small Telescopes and Binoculars (2005: Brunswick Publishing, ISBN-10: 1556182058). He calls it simply the Xi and 64 Ceti Asterism. The description from Raymond's book reads "A visual fuzzy object. Binoculars reveal the two main stars distinctly with (a) string of fainter stars between them." Three faint stars are equally spaced between Xi and 64, while two others lie along the same time extended southwest of 64.

Finally, let's jump borders into Pisces and hunt down some truly big game. Big game in this case will also necessitate big binoculars, since we are looking for the spiral galaxy M74. To find M74, first locate the small constellation of Aries, the Ram. Draw a line from its star Hamal (Alpha Arietis) through Sheratan (Beta Arietis) and extend it to the southwest. Follow the line to the 4th-magnitude star Eta Piscium. Eta creates a small triangle with two fainter stars that seems to point back toward Aries. A "double star" marks the tip of the triangle, offering a hint that you are in the right place. M74 lies almost centered inside this triangle.

Long exposure photographs show M74 to be a lovely face-on Sc spiral highlighted by thin curved arms that wrap around a perfectly circular galactic core. Visually, however, M74 only looks like a dim, very diffuse glow that is only slightly brighter than the surrounding sky. You'll probably sweep right over it several times before realizing exactly where it is. But don't lose hope, it's there.

Mounting your binoculars on a tripod or other support is almost mandatory here, as is averted vision. If those still don't bring it out, try lightly tapping the side of your binoculars. The eye can detect very low surface-brightness objects more readily if they are moving back and forth slightly instead of just sitting motionless. I've used this technique successfully to spy M74 through my 16x70 binoculars.

I've given you some tough challenges this month and would love to hear how you made out with them. Drop me an e-mail or post your successes (and failures) in this column's discussion forum. You'll find a link at the top of this page.

And if you are still hankering for more objects to view, here's a list of what else lurks within this month's Binocular Universe.

Until we meet again next month, remember that for stargazing, two eyes are better than one.