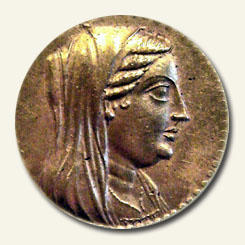 Ptolemy III Euergetes ("Benefactor"), the third ruler of the Ptolemaic dynasty of , ruled in the middle of the third century B.C.  Under his reign, the Ptolemaic empire expanded greatly.

According to legend, his queen, Berenice of Cyrene (depicted on the coin at left), was known across the land for her long, beautiful hair.  One day, as her husband rode off to do battle in the Third Syrian War, Berenice vowed to the goddess Aphrodite that she would sacrifice her flowing locks if her husband came back to her safely.  When he returned, Berenice kept her promise by cutting off her hair and presenting it to the gods.

Not long after it was placed in the temple, however, the hair mysteriously vanished.  The royal couple was incensed.  Thinking quickly, Conon of Samos, Ptolemy's court astronomer, pointed to the night sky, toward our constellation of Coma Berenices, and assured the king and queen that it was Aphrodite who had taken the hair, to place it among the stars for the whole world to see.  Ptolemy and Berenice must not have been stargazers, as they had never noticed the faint mist of light Conon pointed to.  But they were satisfied that Aphrodite was behind the hair caper. 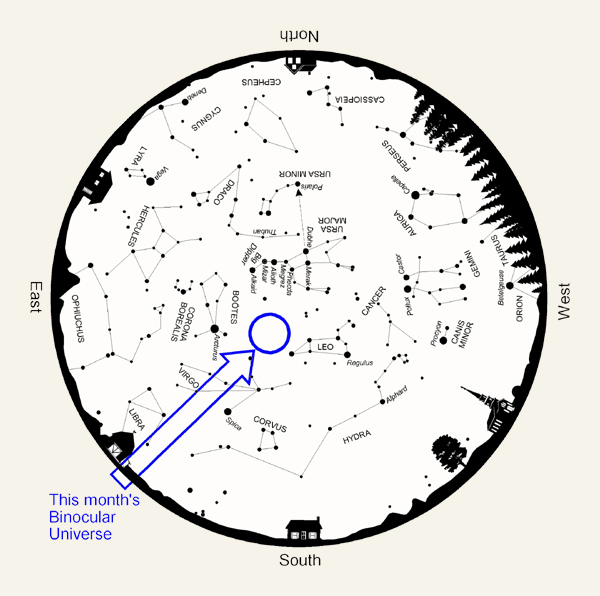 What Conon imagined as his queen's heavenly tresses is actually a collection of 5th- and 6th-magnitude stars spanning almost 5° of sky.  Today, we know this group as the Coma Berenices Star Cluster.  The cluster also goes by the catalog number Melotte 111, its numerical entry in Philibert Jacques Melotte's listing of 245 open star clusters entitled A Catalogue of Star Clusters Shown on the Franklin-Adams Chart Plates, published in 1915.

It wasn't until 1938, however, that most of the stars in Berenice's Hair were proven to form a true, physical star cluster.  That year, Robert J. Trumpler, an astronomer at Lick Observatory, published his studies that identified 37 members as belonging to the group based on their common distance and direction of travel.  Today, sources quote a stellar population ranging from as few as 80 stars (Sky Catalogue 2000.0 volume 2) to as many as 273 (Star Clusters by Archinal and Hynes; Willmann-Bell, 2003). 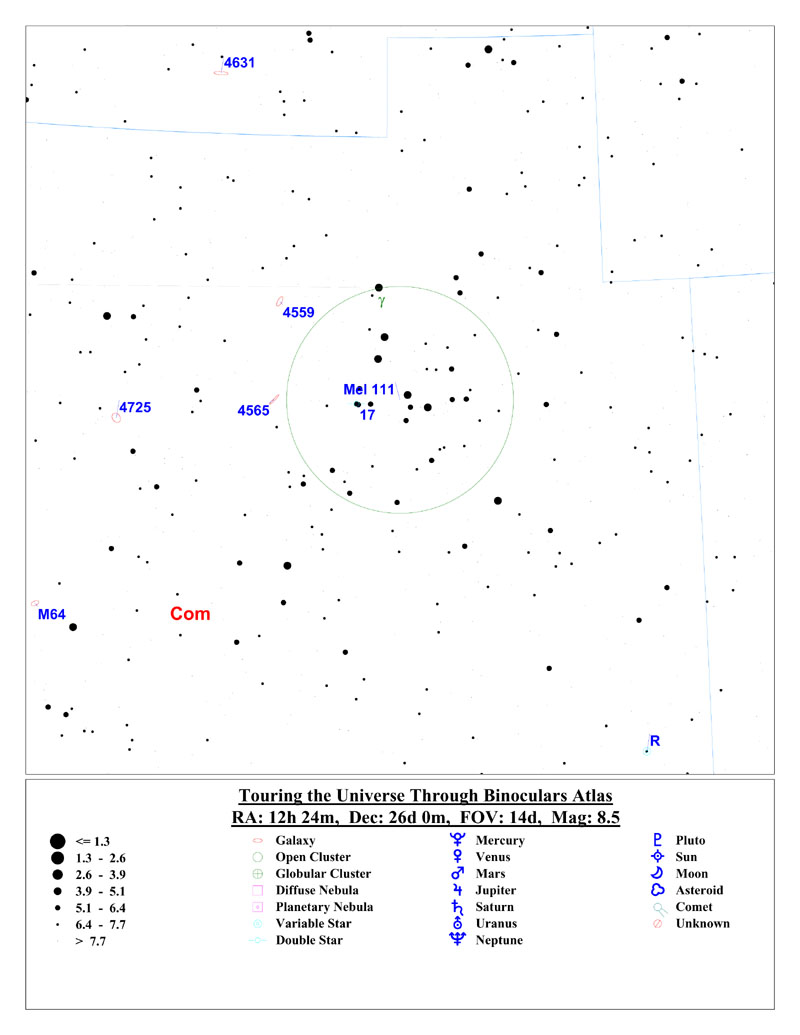 Because it spans such a large area of our sky, Melotte 111 is best appreciated through 7x and 8x binoculars.  Telescopes can't possibly grasp the grandeur of the Coma Star Cluster because of their comparatively high magnifications and narrow fields of view.  Even some 10x binoculars have fields that are too narrow to drink it all in.

The brightest stars in the Coma Star Cluster form a pattern that resembles the lower-case Greek letter Lambda or, if you're viewing from south of the equator, Gamma.  You might also notice a sinuous curve of fainter stars arcing away from the Lambda's west.  Together, they remind of some of the classic "photos" of the Loch Ness Monster.  The Lambda stars represent the monster's arched back, while the faint arc is the monster's long neck and head.

Most cluster members shine perfectly white, although a few give subtle hints of yellow or orange.  For instance, the sun marking the top of the Lambda, labeled 15 Comae, is a golden type K star.  And although it's not a cluster member, 4 Comae to the west also displays a subtle yellowish tint through binoculars.  Try slightly defocusing the image to enhance the subtle colors.

There are also several double stars within Melotte 111, although only 17 Comae is easily resolvable in binoculars.  Found a bit to the east of the cluster's center, 17 consist of two type-A suns.  Take a look for the 6th-magnitude companion star about 2.5' west-southwest of the 5th-magnitude primary.

Don't confuse the Coma Star Cluster with the Coma-Virgo Galaxy Cluster.  Even though the names are quite similar, they refer to two completely different things.  The galaxy cluster is a grand collection of as many of 2,000 separate island universes located 60 million light years away.  By contrast, the Coma Star Cluster is well within our own Milky Way galaxy.  In fact, the Coma Star Cluster is one of the closest open clusters to our solar system.  Measurements made by the European Space Agency's HIPPARCHOS spacecraft reveal that the cluster stars lay an average of 288 light years away, and are estimated to be about 400 million years old.  These same studies find that the stars show neither a blue shift nor a red shift.  That means the cluster is moving in the same direction through the Milky Way as our solar system.  Could that point to a common origin, despite our Sun's advanced age?

Incidentally, several members of the Coma-Virgo Galaxy Cluster are on the fringe of visibility through steadily held binoculars under dark skies.  You'll find five of them, including the famous Black-Eye Galaxy, M64, plotted on the map here and listed below.  See how many you can find tonight!

Have a question, a comment, or a suggestion for future columns?  I'd love to hear it.  Post your observations in this column's discussion forum or drop me a line at phil@philharrington.net.

Next month, we'll pay a call on two of spring's finest globular clusters, and bump into an asterism or two along the way.  Until we meet again in June, remember that two eyes are better than one.