April showers may bring May flowers here on Earth, but up in the sky, October is the soggiest time of year.  That's because the "wet quarter" flows above our southern horizons this month, bringing with it several constellations that are associated with water in one way or the other.  There are Capricornus, the Sea-Goat; Aquarius, the Water-Bearer; Piscis Austrinus, the Southern Fish; Cetus, the Whale; and Pisces, the Fishes.  None are striking from a naked-eye perspective, so you may need to travel to a site that is free of terrestrial obstructions, low-slung light pollution, and any horizon-hugging haze to make them out.

Except this year.  That's because these evenings Capricornus, which always impresses me more as the bottom half of a bikini than a "sea-goat (whatever that is) plays host to brilliant Jupiter.  The king of the planets draws the attention of everyone from all quarters to the wet quarter, whether you're in the heart of a city or somewhere out in the rural countryside.

Binoculars easily show the four Galilean moons orbiting Jupiter.  These serve as a fitting tribute to the man who, 400 years ago, solved the thousand-year-old riddle of which orbits which, Earth around the Sun or the Sun around Earth.  The fact that Galileo saw what he called four "stars" -- originally, the "Medici stars" -- orbiting Jupiter proved that not everything went around Earth, as Ptolemy's geocentric gospel had prescribed since about 140 AD.

It's fun to watch the acrobatics of the Galilean satellites as they shift from one side of the planet to the other.  Can you identify all four through your binoculars?  To find out which is which, use Sky & Telescope's Jupiter's Moons Javascript Utility.  For instance, on October 17 at UT (which is the evening of October 16 in ), all four moons will appear extended in a straight line to the west of the planet.  Twenty-four hours later, Io and Europa will have shifted to the east of the planet.

As an aside, as you are showing Jupiter and its moons to family and friends, please don't commit the same error found in many undergraduate astronomy textbooks by referring to Jupiter as a "gas giant."  It's not.  For most of its thickness, Jupiter consists of a strange cocktail called metallic hydrogen.  Metallic hydrogen, which is electrically conductive, is not gaseous.  At the pressures and conditions found within Jupiter's interior, metallic hydrogen is a liquid.  So, call it a "giant planet" or a "Jovian planet," but a "gas giant?"  No. 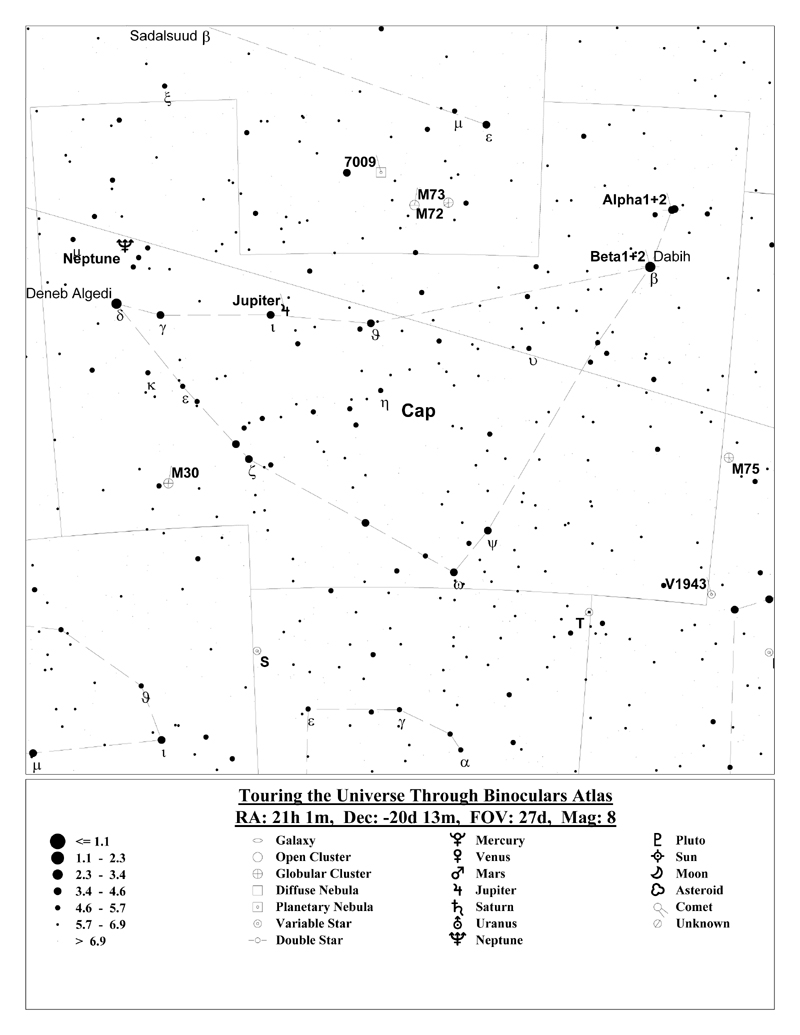 Another giant of the solar system, the eighth planet, , looms not far to the east of Jupiter this fall.  Since it was discovered in September 1846, has marched slowly around the sky, but has yet to complete a full orbit.  Look for it to the east-northeast of a line of three equally spaced stars north of Deneb Algedi (ä Capricorni).  only shines at 8th magnitude -- six times fainter than the Galilean moons -- so it may take some searching before it is found.  Use the map here to spot it.  My 10x50s hint at the planet’s unusual turquoise color, which may also help you to pick it out from the surroundings.

To the west of Jupiter, we find two double stars that are ideal for binoculars.  First, at the northwestern corner of the constellation’s triangular outline, we find Algedi, or Alpha (á) Capricorni.  Algedi is made up of two 4th-magnitude stars that are easy to see even through a pair of small pocket binoculars.  They may look the same, but it turns out that the two stars are nowhere near each other in space. The yellow giant eastern star, known as Alpha-2, is 109 light years from us, while Alpha-1, a yellow supergiant, is nearly seven times further away.

The second double star is Dabih, or Beta (â) Capricorni, is just south of Algedi in the same field of view.  While Algedi's two stars appear identically bright, Dabih's two stars look markedly different.  The brighter sun, called Dabih-Major, shines at 3rd magnitude, while its companion, Dabih-Minor, is 16 times fainter at 6th magnitude.  They may look different, but studies show that both form a physical system 330 light years away.  Each is separated from the other by about a third of a light year.  As a result, it takes at least one million years for the pair to orbit one another.

There is much more here than meets the eye.  Studies show that Dabih-Minor is a spectroscopic binary dominated by a blue-white giant that is unusually rich in platinum, gold, mercury, and bismuth.  Dabih-Major is an orange giant that is circled by a close-set pair of stars.  The more massive of those two is a blue star, but little is known about its companion apart from it taking only 8.7 days to orbit.  The two are separated from each other by only one-third Mercury's distance from the Sun.

Our last stop within Capricornus is the constellation’s sole contribution to the Messier catalog.  The 7th-magnitude globular cluster M30 lies in the constellation’s barren southeastern corner.  The stars Nashira and Deneb Algedi mark the Sea-Goat's tail and the eastern point of the Capricornus triangle.  Turn southwest toward the triangle's southern tip, pausing partway along the way at the 4th-magnitude star Zeta Capricorni.  Center Zeta in your finderscope, then look toward the eastern edge of the field.  A 5th-magnitude star, 41 Capricorni, should just be coming into view.  Center on 41, and then look just to that star's west.  Can you see a dim, round patch of grayish light surrounding a brighter core?  That’s M30.  It will take at least a 6-inch (150-mm) telescope to show any sign of the 100,000 or so individual stars that make up this distant swarm.

While you're in the area, be sure to try to spot the globular cluster M72, the tiny 4-star asterism M73, and planetary nebula NGC 7009.  All lie across the border in Aquarius, and are shown on the chart above and listed below.

That's the view from Bikini Bottom.  Comments, questions, suggestions for this column?  Post them in the discussion thread or drop me a line.  Till next month, when we will once again tour the universe through our binoculars, remember that two eyes are better than one.