The North America Nebula (NGC 7000) is a large expanse of glowing hydrogen gas mixed with opaque clouds of cosmic dust just 3 degrees east of Deneb (Alpha Cygni) and 1 degree to the west of 4th-magnitude Xi Cygni. Famous as one of the most luminous blue supergiants visible in the night sky, Deneb marks the tail of Cygnus the Swan, or if you prefer, the top of the Northern Cross asterism. 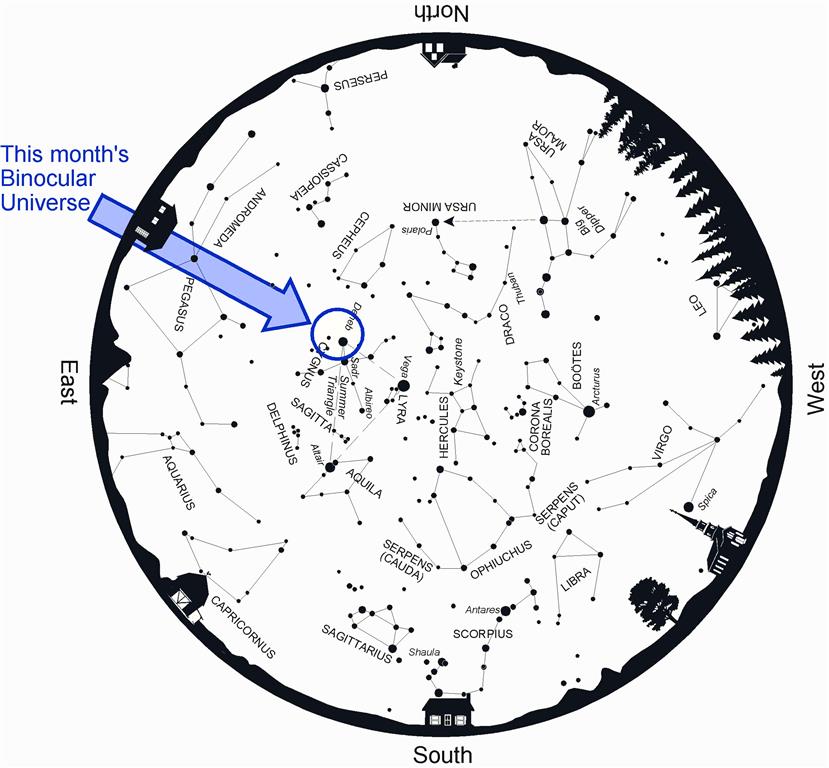 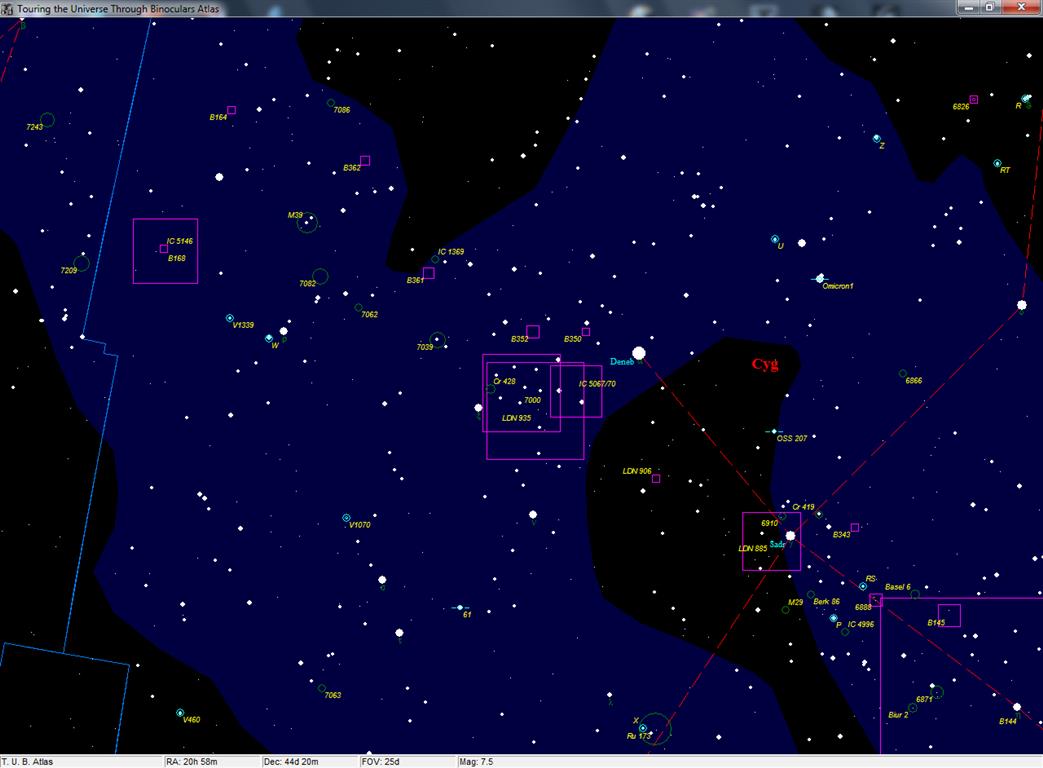 The North America Nebula epitomizes how observational astronomy has evolved over the years.  When he discovered it on , Sir William Herschel (1738-1822) described the view through his 18.7-inch reflecting telescope as "very large diffused nebulosity, brighter in the middle."  Honestly, I am surprised he could see it at all because of his instrument's very narrow field of view.  That's one of the biggest challenges to seeing the North America Nebula through a telescope -- it spans an area nearly 2° in diameter.  From the sounds of Herschel's notes, the thought of trying to spot it in anything less never crossed his mind.

and four years later, the German astronomer Max Wolf became the first to photograph the full span of NGC 7000.  Upon seeing his results, he christened it the North America Nebula for its eerie resemblance to that continent.  Since then, images of this vast emission nebula have appeared in nearly every introductory astronomy textbook and coffee-table astrophoto album alike.

Before the 1970s, conventional wisdom had it that, although this huge celestial continent was prominent in photographs, it was nearly invisible to the human eye because it was too large and too red.  Part of that mindset has to be attributed to the observing guides that were in print at the time.  Nearly all concentrated solely on telescopic observing.  They were so fixated on what could be seen through conventional long focal length instruments using the comparatively narrow field eyepieces of the day that they ignored other options.   And since NGC 7000 could not squeeze into a single field of view, it was nearly impossible to isolate its clouds from their surroundings.

One of the first authors to mention the North America Nebula, though not by name, was the Reverend Thomas W. Webb.  In his classic book Celestial Objects for Common Telescopes, Webb described the nebula as having a "sharply defined south [edge], and containing a dark opening like a cross; visible as a glow in a field glass, but brightest part scarcely visible in 17¼-in reflector."

Still, most considered seeing the North America Nebula by eye to be futile.  The winds of change began to blow, however, with the landmark work Burnham's Celestial Handbook, published originally in 1966.  Author Robert Burnham, Jr., advised "Binoculars show an irregular glow more than 1½° in diameter with the North American shape becoming unmistakable on a clear night.  Perhaps the best view of the unusual outline is obtained with a 3 or 4-inch rich-field telescope and wide-angle eyepiece."

Another pioneer who urged amateurs to look for the North America Nebula was Walter Scott Houston (1912-1993).  Throughout his nearly half century of penning the Deep-Sky Wonders column in Sky & Telescope magazine, Houston often mused about seeing this difficult object.  His evolving views captured the changing attitudes over its visibility.  For instance, in his September 1948 column, he wrote, "the North America nebula near Deneb cannot be observed readily without photography."  But then, fast forward several decades to find Scotty advising "if observing conditions are very good, and you know what size and shape to expect, the North America Nebula can be made out easily with the naked eye."

To try this yourself whether through binoculars or with eye alone, you first need to be able to see the Cygnus Milky Way clearly.  A reasonably dark suburban sky should be sufficient, but wait until Cygnus is nearest the zenith in order to isolate it from any errant clouds or light pollution.  Zero in on the area between Deneb and Xi Cygni, which lies at the edge of the Northern Coalsack, a large expanse of dark nebulosity at the northern terminus of the Milky Way's Great Rift.  The Great Rift slices the galactic plane in half lengthwise, extending southward from Cygnus through Vulpecula, Sagitta, and Aquila on its way toward Sagittarius.

The brightest part of the North America Nebula, marking "Mexico " and " Florida ," juts into the Northern Coalsack in much the same way as their earthly counterparts mark the Gulf of Mexico 's shoreline.  The nebula's hook-shaped glow appears slightly brighter than the Milky Way immediately surrounding it, but be forewarned that, by eye alone, it is deceptively small.  If you cannot see it by eye alone, try using a narrowband filter.  It might be best to try the filter test with a friend who owns the same filter as you, since viewing through a pair of filters is best.  Otherwise, you will lose the two-eyed advantage discussed in chapter 1 by squinting through only one eye.

If you can see the North America Nebula easily, see how you do with the Pelican Nebula.  In reality, the Pelican and the North America Nebulae are both part of the same huge complex of glowing hydrogen gas.  An opaque cloud of interstellar dust that slices in front of the background emission nebula gives the illusion that we are looking at two different entities.  That absorption cloud is cataloged separately as Lynds 935, or LDN 935, its listing in the catalog of dark nebulae compiled by the astronomer Beverly T. Lynds and published in the Astrophysical Journal Supplement (vol. 7, p.1) in 1962.

The Pelican carries two catalog designations -- IC 5067 and IC 5070 -- that point to two portions of the nebula.  The eastern edge of Lynds 935 carves out the outline of the North America Nebula's (terrestrial) east coast, while its western edge forms the long beak and pointy head of the celestial pelican, listed as IC 5070.  Photographs of the region reveal two small, circular dark dust clouds marking the bird's eyes, while a brighter tuft to their northwest, IC 5067, suggests the curved shape of its head and neck.

The Pelican's ionized hydrogen is easy to record in photographs, but seeing any hint of it by eye is usually frustrated by its deep-red emission.  Conditions have to be nearly perfect to see even the slightest hint.  A good rule of thumb is set by the North America Nebula itself.  If it is easily visible by eye, then the sky might be clear enough to see the Pelican through binoculars.

Interestingly, the North America/Pelican complex lies an estimated 2,000 light years away, which is only a few hundred light years farther than the Orion Nebula.  But while the Orion Nebula is an easy target to spot even under less than ideal conditions, this similar stellar nursery is far more difficult to study even under superior skies.  My best view of the Pelican through binoculars came several summers ago while visiting New York ’s Catskill Mountains .  There, with a naked-eye limiting magnitude of better than 6.5, the Pelican's profile was distinct through my 10x50 binoculars.

Talk about an overcrowded area!  Take a look at all the other binocular targets within this month’s Binocular Universe.  That should be enough keep all of us busy for the month to come. 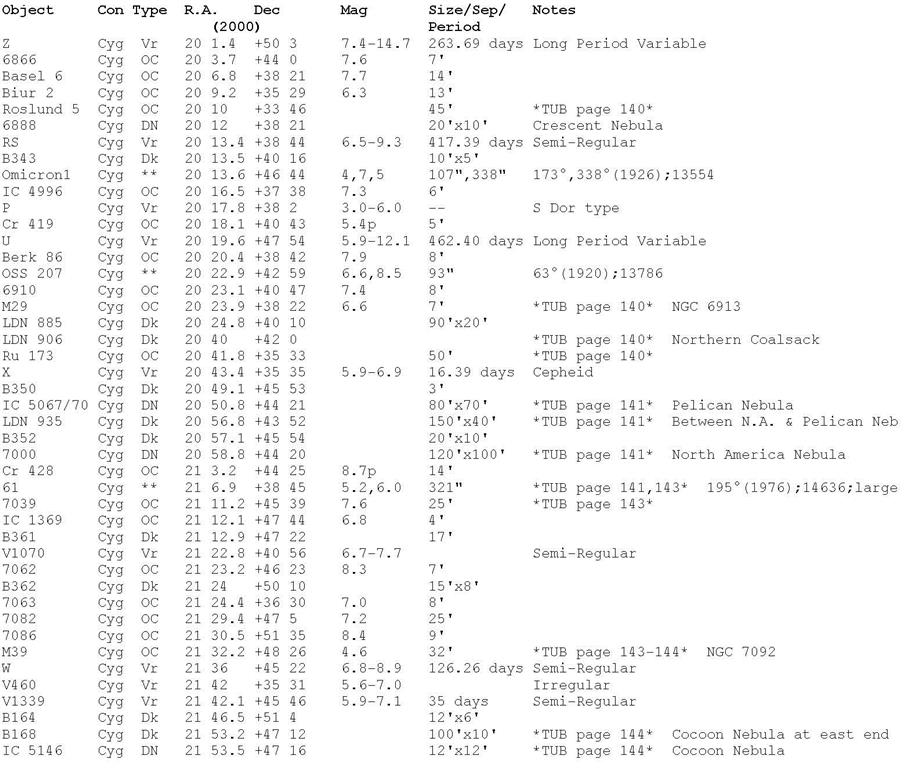 Questions, comments, suggestions?  Let’s talk!  Post them in this blog’s discussion forum.  Until next month, when autumn brings new sights for us to enjoy, remember that when it comes to stargazing, two eyes are better than one!

That was a very interesting article, Phil.  I had some good views of the North America Nebula and the Pelican Nebula on several nights last week from Cherry Springs State Park. Conditions were very good but not quite as good as they can be on a superb night at the park.  I used 8x42 and 15x70 binoculars and my 101mm Tele Vue refractor, a 35mm Panoptic (4.4 degrees TFOV), and an Orion UltraBlock filter.

Here's a five-minute long shot of that region that I took at the park a number of years ago.

Sep 09 2014 09:16 AM
Phil,
I realy enjoyed your article on the North America nebula. I have enjoyed seeing this object from dark sky sites with my binoculars many times over the years. I too even saw this object naked eye about ten years ago now from the Mid-Atlantic Star Party. It was truly a surprise to see it naked eye and I quickly confirmed it with my binoculars. I have never seen the Pelican except with my 10-inch telescope though. On great nights from a dark sky site, I will now be looking for this object too. Thanks for the challenge.

Thanks for this article. I really appreciated the historical perspective you provided on the "visibility" of the NA Nebula through the ages. When I first started observing in 1977, most of the reference books I had still regarded the nebula as a photographic object only, and I believed it as beyond reach. It was Scotty Houston that convinced me to try, and it's now one of my favorite summer and fall objects.