Wouldn’t you think, given his mythological prowess for killing the ferocious Nemean lion and multi-headed Hydra along many other acts of bravery, that Hercules would have been immortalized in the sky with a more prominent set of stars than we find tonight?  The sky's other superhero, Orion, certainly beams in the winter sky.  But you really have to look hard to see Hercules. 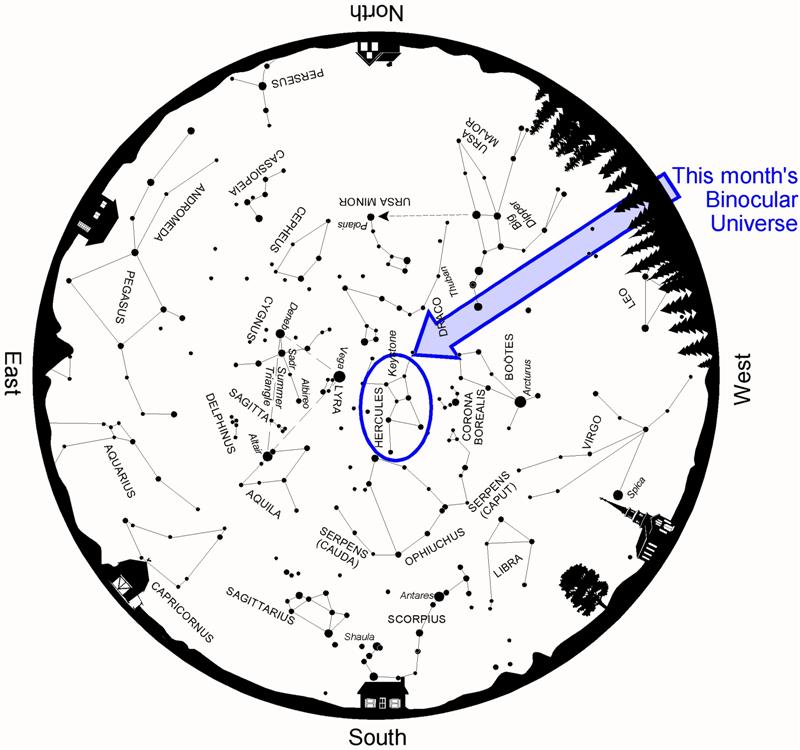 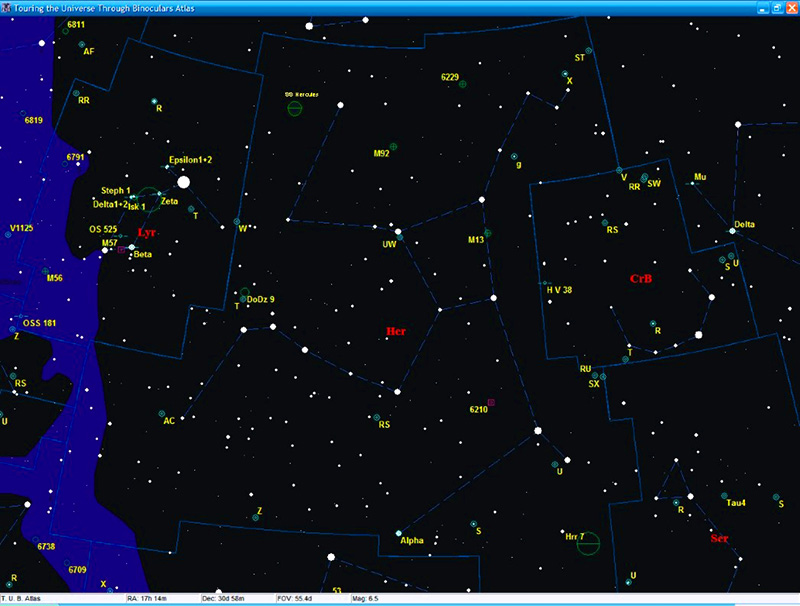 The easiest way to find him is to go about two-thirds of the way from the bright star Arcturus in Boötes to Vega in Lyra.  You'll pass through semicircular Corona Borealis first before coming to a trapezoid of four stars known as the Keystone.  Celestial artists usually portray the Keystone as part of Hercules' torso.  He is often shown as kneeling, a pose that dates back to the constellation's Greek origins.  Although the Greeks imagined a kneeling figure here, they didn't identify him by name.  The Greek poet Aratus simply called the constellation "the Phantom whose name none can tell."

The Keystone is home to this month's first target.  M13, the Great Hercules Globular Cluster, resides along its western side, about a quarter of the way from Eta to Zeta Herculis.  Aim there and you should see a faint blur of light centered between two faint "sentry stars" standing at attention to either side.  Through binoculars, M13 looks like a fluffy ball of cotton suspended against the sky.  You'll need a telescope to resolve any of its estimated 100,000 individual stars.

Can you imagine what a spectacular sight those stars must be from a planet orbiting one of them?  There's a famous science fiction story called Nightfall written in 1941 by Isaac Asimov about just that.  Nightfall tells of a civilization on the planet Lagash circling a six-star system.  's complex orbit was such that the sky was always lit by at least one of those six stars.  No one alive had ever witnessed the dark of night.  But once every 2,049 years, five of the stars would be visible only from one side of the planet, while an eclipse would cover the sixth star on the other side.  On that occasion, the sky would be completely dark.  Learning that an eclipse was imminent and not knowing what darkness is, the people of Lagash are stricken with fear and madness over the impending terror.  The irony of the story is that, just as the eclipse occurs and the lone sun is extinguished, the entire sky suddenly bursts with uncountable distant stars.  It turns out that is inside a globular cluster.  For those looking for a great cloudy night diversion, you'll find a podcast of the story here.

Hercules also holds a second globular, M92, in store for our binoculars.  To spot it, aim along the northern side of the Keystone, marked by the stars Eta and Pi Herculis.  Both ought to just squeeze into your field of view.  Look for a close-set pair of fainter stars to their north, which with Eta and Pi, make a fairly conspicuous right triangle.  From that fainter pair, which collectively mark the triangle's right angle, head north-northeast about half a field (3 degrees) to M92.  Like M13, M92 will look like a misty, little glow accented with a brighter central core.  Both globulars may just squeeze into the same field of wide-angle binoculars, affording an interesting comparison.

Next, we have a fun little asterism that isn't plotted on any star charts that I know of...that is, except for the chart here.  I bumped into a few years ago while doing a little early morning observing.  I jokingly call it the SS Hercules, since it reminds me of a sailboat.  To find it, head to the northeast of M92 about a binocular field (5°) to the star Iota Herculis, and then another half a field (3°) due east.  There, you should see a group of seven stars.  To me, the two brightest form the mast, three fainter stars outline the deck, and two others mark the underside of the hull.  Drop me a line and let me know if you spot the good ship SS Hercules.

East of the Keystone, near the border with Lyra, we find Dolidze-Dzimselejsvili 9, a little known open cluster less than a degree west of the star 104 Herculis.  Binoculars reveal about 2/3 of this group's 15 stars loosely gathered in a semicircle measuring about half a degree across.

Now, head south of the Keystone to this month's cosmic challenge.  Planetary nebula NGC 6210 is actually bright enough to be seen through most binoculars, but its small size makes it difficult to distinguish from the surrounding stars.  While the disk's relative smallness prevents clear resolution, the nebula's characteristic bluish color helps it to stand out in a crowded star field.  Can you spot it?

If that was too tough, head on over to the constellation's brightest star, Rasalgethi (Alpha Herculis).  Rasalgethi, which translates "head of the kneeler," glows with a distinctive reddish twinkle through binoculars.  By their studying its spectrum, astronomers know that Rasalgethi is a red giant star.  A view through a telescope reveals that it is also a beautiful double star.  Its fainter companion lies about 5 arc-seconds away, which is too close for most common binoculars.  As with many red giants, Rasalgethi is also a variable star, fluctuating between about 3rd and 4th magnitude over a period of roughly 128 days.

Finally, let's finish things off with another fun asterism in southwestern Hercules, which I call the Zigzag.  In my book Touring the Universe through Binoculars, I describe it as a curious little asterism of a dozen or so faint stars that meanders across southwestern Hercules.  It's listed in the book as "Harrington 7" and is abbreviated on the chart here as Hrr 7.  Look for the Zigzag about a third of a field southwest of Omega Herculis.

Here are some other targets to try your luck with inside this month's Binocular Universe.  Give each a try and post your observations in this column’s CN forum. 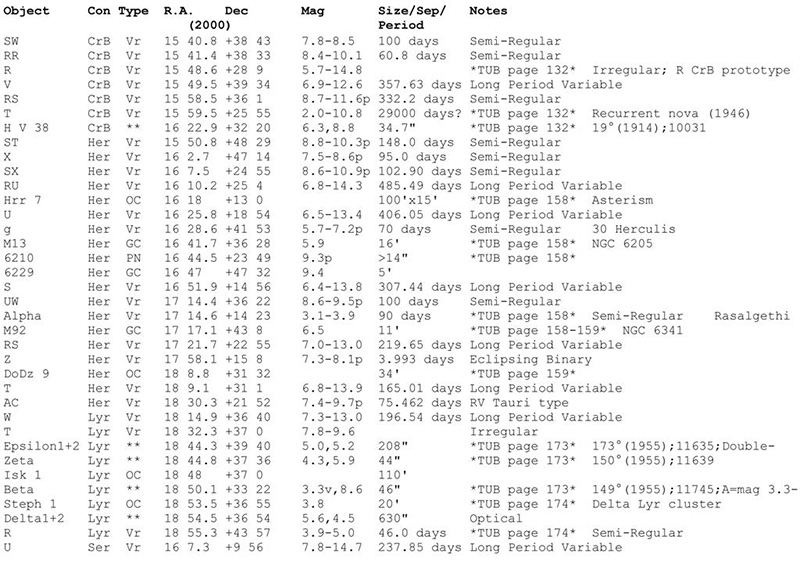