All good things must come to an end, and that includes our seasonal view of the center of our Milky Way galaxy in and around the constellation Sagittarius. Gracing our sky every summer, the Milky Way is a treasure trove of targets for binoculars and telescopes alike. It’s sad to see it go. So, before we bid adieu to this grand region, let’s enjoy a few late summer targets that are a little off the beaten path. 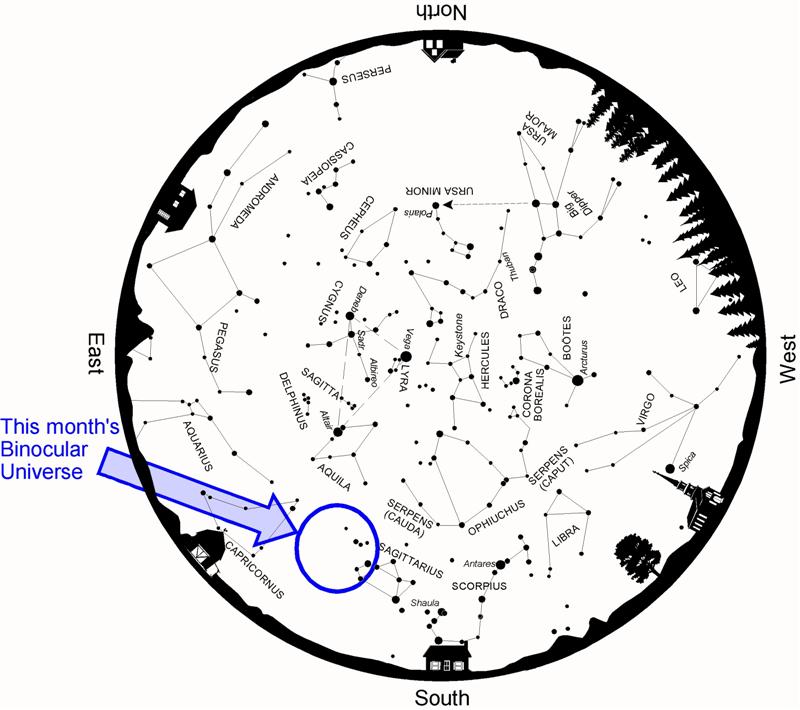 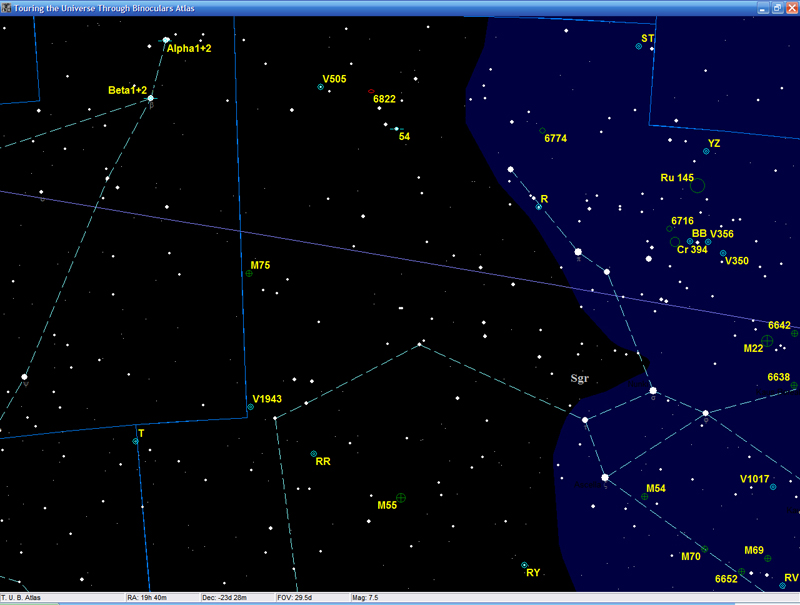 This month, we’ll focus our attention on the eastern half of Sagittarius, where few stargazers tread. That’s probably because, unlike the western half of the constellation with its distinctive Teapot asterism, eastern Sagittarius has very few distinguishing stellar signposts. But one asterism does stand out nicely in our binoculars, and makes a great jumping-off point.

That asterism is popularly known as the Teaspoon, a logical accompaniment for a teapot. The Teaspoon is drawn from the stars Nu (?), Rho-1 (?), 43, Pi (p), Omega (?), and Xi-1 (?-1) and Xi-2 (?-2) Sagittarii. All are found to the northeast of the Teapot’s curved handle. You’ll find the Teaspoon’s curved profile on the chart above. It’s a fun sight with even the smallest pocket binoculars.

The close-set pair of stars Xi-1 and Xi-2 Sagittarii adds additional luster to the Teaspoon, but don't be fooled by looks alone. What looks like a true binary star through our binoculars turns out to be just a chance, line-of-sight alignment. Xi-1, a blue supergiant, is more than 2,300 light years away, but Xi-2, a yellow dwarf a bit cooler than our Sun, is just a scant 372 light years from us.

Let’s use the Teaspoon to guide us toward our next two targets. By scanning 5 degrees due east of Nu Sagittarii at the northern end of the Teaspoon’s bent handle, you'll come to a small upside-down kite-shaped pattern of five stars. If you look carefully, you will see that 54 Sagittarii, labeled on the chart, is a double star; this time, we’re looking at a true binary system. The 5th-magnitude primary sun and 8th-magnitude companion are separated by about 46 arc-seconds. That’s wide enough to be split through even the tiniest pocket binoculars. You may also notice that the primary sun is a pale yellow, while the companion is bluish. Slightly defocusing your binoculars should help accentuate the colors.

Stay at the kite to try your luck with this next, super-challenging target. Looking at the chart above, you’ll see how the three stars marking the top of the kite curve toward NGC 6822, a dwarf barred irregular galaxy that is also known as Barnard’s Galaxy. Even though this guy is a member of the Milky Way’s Local Group of galaxies, it requires dark skies and a steady hand to be seen with binoculars. And even then, it’s a difficult catch. I’ve made it out with my 16x70s, but have never nabbed it in anything smaller. But it’s always fun to try, right?

Don't be surprised if it takes a few attempts before you find it. Barnard's Galaxy is easily hidden by any haze or light pollution, especially when viewed from mid-northern latitudes because of its southerly declination. Its light is further dimmed by intervening clouds of cosmic dust that litter the plane of our galaxy, which passes nearby. If you can't find it at first, you can take heart in knowing that legendary observers William and John Herschel never saw it either!

They did, however, see these next two targets, as did Charles Messier before them. First up, we have the globular cluster M55. Discovered in 1752 by Abbe Nicholas Louis de LaCaille, M55 is one of those deceiving objects that sounds a lot better on paper than it proves to be in reality. Just take a look at its specifications: 7th magnitude and 19 arc-minutes across. Those conger up thoughts of an easy target in most minds, but in truth M55 can be a tough customer. That’s because, unlike most other globular clusters, which appear highly concentrated, M55 is spread out more evenly. As a result, its surface brightness (that is, its brightness per unit area) is deceptively low.

To locate M55, extend a line from the stars Nunki (Sigma [s] Sagittarii) through Tau (t) Sagittarii in the Teapot's handle and continue it to the southeast. Tracing that line with your binoculars, you will first pass a small triangle of dim stars at about the halfway point to M55. Continue another field or so to the southeast and there’s M55, lying within a long, thin rectangle of 6th-magnitude stars. With most binoculars, it looks like a dim ball of light. But if you have sharp eyes and hold your binoculars steadily, you just might make out a dim point of light slightly off-centered in M55. That lone star, shining at about 9th magnitude, is most likely a foreground object and not actually a member of the cluster.


Our final target this month is, by coincidence, my final target when I first made my way through the Messier catalog more than 40 years ago. M75 is another globular cluster that poses a challenge for binocular users, but for a different reason. M75 is just plain, old dim at magnitude 8.6. Between that and its small apparent size, M75 is going to take a clear sky and steadily supported binoculars. Visually, it looks perfectly round and is accented by a brighter nucleus.

Compare the view of M55 and M75 in my panoramic sketch above. There is obviously quite a difference in appearance. Part of that is due to their distances. M55 is 17,600 light-years from Earth, while M75 is about 67,500 light years away. But part is also due to how densely packed the clusters are. Globulars are rated on a 1-to-12 concentration scale that was set up by Harlow Shapley and Helen Hogg in 1927. According to this system, M75 is a Class 1 globular. That makes it the most densely packed of the Messier globulars. By comparison, loosely packed M55 is rated Class 11. That explains the latter’s low surface brightness.

That’s all we have time for this month, but be sure to revisit the double stars Alpha and Beta Capricorni at the top left (northeastern) corner of the finder chart above. Both were previously profiled in my October 2009 Binocular Universe e-column. Beyond them, if you are still hungering for more binocular targets, here are some more to try your luck with inside this month's Binocular Universe. 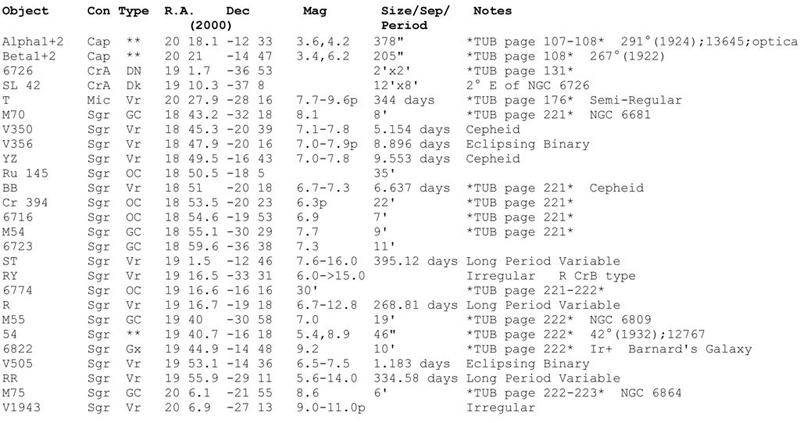 The change of seasons is soon upon us, and so until we meet again under autumn skies, remember that two eyes are better than one!