This month, we're taking a sabbatical from northern skies and heading to the deep south, where we will visit the finest globular star cluster in the entire sky.  Which cluster has earned that coveted title?  Some would argue 47 Tucanae, while others would say M13 in Hercules or possibly M22 in Sagittarius.  While they are all wonderful sights, there is only one king of the globulars, to my eyes anyway.  Omega Centauri. 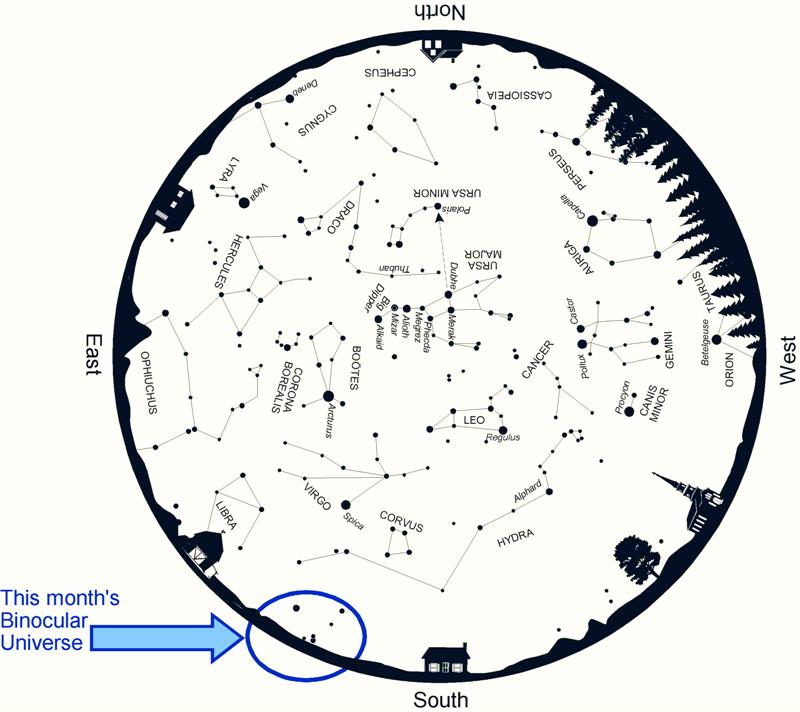 Above: Spring star map from Star Watch by Phil Harrington. 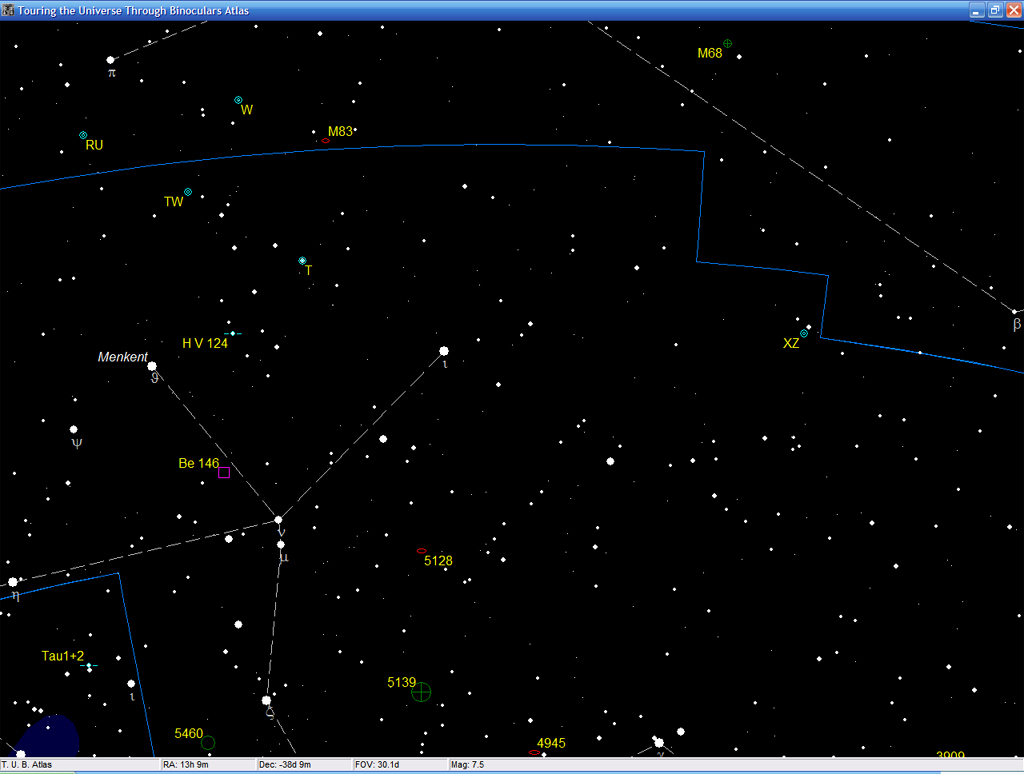 Above: Finder chart for this month's Binocular Universe.  Chart adapted from Touring the Universe through Binoculars Atlas (TUBA)

Omega is bright enough to be visible to the naked eye as a faint star-like point within the lopsided hexagonal body of the Centaur.  In fact, it was thought to be just that -- just another faint star -- before the invention of the telescope.  Ptolemy listed it as such in his Almagest catalog of 140 AD, while Johann Bayer assigned it the Greek letter Omega (ù) in his monumental Uranometria atlas of 1603.

It wasn't until nearly seven decades after the invention of the telescope that its true nature was revealed.  In 1677, Edmund Halley, most famous for his work on and predictions concerning the comet that bears his name, became the first to see Omega Centauri's true inner self; that it's not just one star, but rather a huge swarm of them.  Halley, apparently a man of few words, described this magnificent object as merely a "luminous spot or patch."

Current estimates tell us that Halley's patch contains several million stars, more than any of the other 150 globular clusters in the Milky Way's family.  Those millions of stars are all crammed into a spherical area no more than 150 light years across, which means that the density inside Omega's core is about 180 stars per cubic light year.  That's about 80,000 times higher than the rural surroundings that the Sun enjoys.  Astronomers place Omega Centauri at 15,800 light years away, which also makes it one of the closest of its kind.

These two factors -- size and distance -- work together to create a grand view through binoculars and telescopes alike.  While a telescope's higher magnification will resolved Omega to its core, some stars around the fringes can be spotted with as little as 11-power.  In fact, even 7-power binoculars show a "not-quite-resolved" graininess to the cluster.

All binoculars clearly show that Omega is not uniformly round, like most other globulars.  Instead, it's surprisingly oval, or oblate.  This effect is due to centripetal force generated by the cluster's rate of rotation, similar to what causes Jupiter to flatten at its poles and bulge at its equator.

Regardless of the instrument used to spot it, your first trip to Omega Centauri will be remembered for a lifetime.  I fondly recall my first encounter way back in 1986, when my family and I had traveled to the Florida Everglades, ironically to see Halley's Comet (and , but I digress).  Although the comet left a lot to be desired (in fact, I'd use Halley's own words and describe his comet as just a "luminous spot or patch"), Omega was a wondrous sight.  Going back and forth between it and M13 -- often heralded as the finest globular north of the celestial equator -- left little doubt of who is the reigning champ of the globulars.

Incidentally, Omega is theoretically visible from as far north as the latitude of (40° north), but naturally, it will suffer greatly due to atmospheric interference.  I've tried spotting it from the south without success, although I have spotted stars matching Omega's declination, so it is possible.  If you've seen Omega from a latitude close to 40° north, I'd love to hear from you.


If Omega is a little too far south for you, head 5° north and try your luck with a galactic enigma.  On , Scottish astronomer James Dunlop discovered what would prove to be a puzzle for the ages. While observing from , Dunlop found what he later described as "a very singular double nebula. These two nebulae are completely distinct from each other, and no connection of the nebulous matters between them." A singular double nebula? Sounds more like an astronomical oxymoron than an observation. What had Dunlop found?

Dunlop's riddle is now known as NGC 5128, a fascinating galaxy that’s also known as the radio source Centaurus A for its strong emissions. When we look at NGC 5128, we are looking at a case of galactic cannibalism. Inside the heart of this huge elliptical galaxy lies a massive black hole that is consuming a smaller spiral galaxy. The two are believed to have collided between 160 and 500 million years ago.

Your binoculars won't detect any of the internal strife that NGC 5128 is enduring, but they can show you this intergalactic train wreck that continues to fascinate astronomers. That is, if you can see the galaxy at all. It never rises more than 7° above my own horizon here on Long Island.  That’s better than Omega Centauri, but not by much. If you’re further north, its maximum altitude shrinks. Of course, travel southward and NGC 5128 will climb higher in the sky.

Overlooking the along 's south shore, I can just make out NGC 5128 through my 10x50 binoculars. It's tough, but by waiting until it lies on the meridian and is highest in the sky, it's unmistakable.

As luck would have it, the bright star Spica [Alpha (á) Virginis] has nearly the same right ascension as both NGC 5128 and Omega Centauri, so we can use it as a gauge for when both are at culmination.

If NGC 5128 is still too far south, you'll notice that we have M83 on the top edge of this month’s finder chart, as well.  Even with a clear view, however, finding it can take some extra effort. But if you follow these steps, you should spot it the first time out. Again starting from Spica, head south 12°, or roughly two binocular fields, to 3rd-magnitude Gamma (ã) Hydrae. Swing to Gamma's southeast and keep an eye out for a right triangle of stars resembling a deformed arrowhead. M83 lies just to the south of the arrowhead's eastern tip.

M83 is visible through nearly all binoculars as a bright stellar point surrounded by the soft glow of its spiral arms. Many amateurs seem to ignore M83 because of its out-of-the-way location, but don't you make the same mistake. In fact, thanks to the attractive star field created by that crooked arrowhead, it's become one of my favorite spring binocular targets.

Before we close this month, many readers have asked me to include some viewing tips from time to time in this column. I think that's a great idea, and would like to begin with a basic one: how to hold binoculars by hand. That sounds easy enough, but there is a right way and a wrong way. A few years ago, Robert Andrews from Lonetree, Colorado, sent me the following tip. "While in the Navy, I was taught to hold them cradling the sides of the barrels in my fingers with the hands open, and rest the extended thumbs on my cheeks or the side of my face. This results in much more stability." This is a slightly different technique than I'm used to, but I tested it for myself and found that it works well. Give it a try for yourself.

Have a favorite binocular tip or trick? Send them to me, either by posting them to this column's discussion forum or using the e-mail link at the top of this article, and I'll try to include them in a future column.

Until we meet again next month under the stars, remember that two eyes are better than one.