Sculptor is one of the sky's least conspicuous constellations. Here in the northern hemisphere, we find it s****ing the southern horizon to the east of the 1st-magnitude star Fomalhaut in Piscis Austrinus and south of 2nd-magnitude Diphda in Cetus. Between its low altitude and the fact that none of its stars shining brighter than 4th magnitude, spotting Sculptor can be a tough test! That means it is best to hunt for this month’s targets when they are on or near the meridian. In December, that’s just as evening twilight fades. 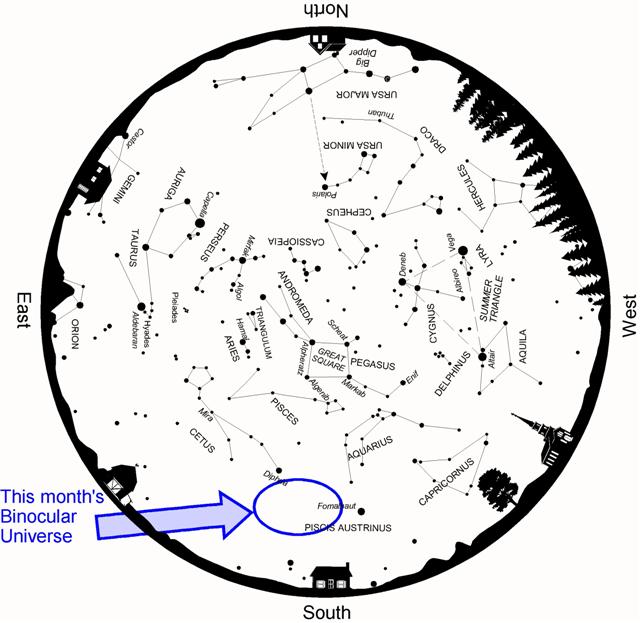 Above: Autumn star map adapted from the book Star Watch by Phil Harrington 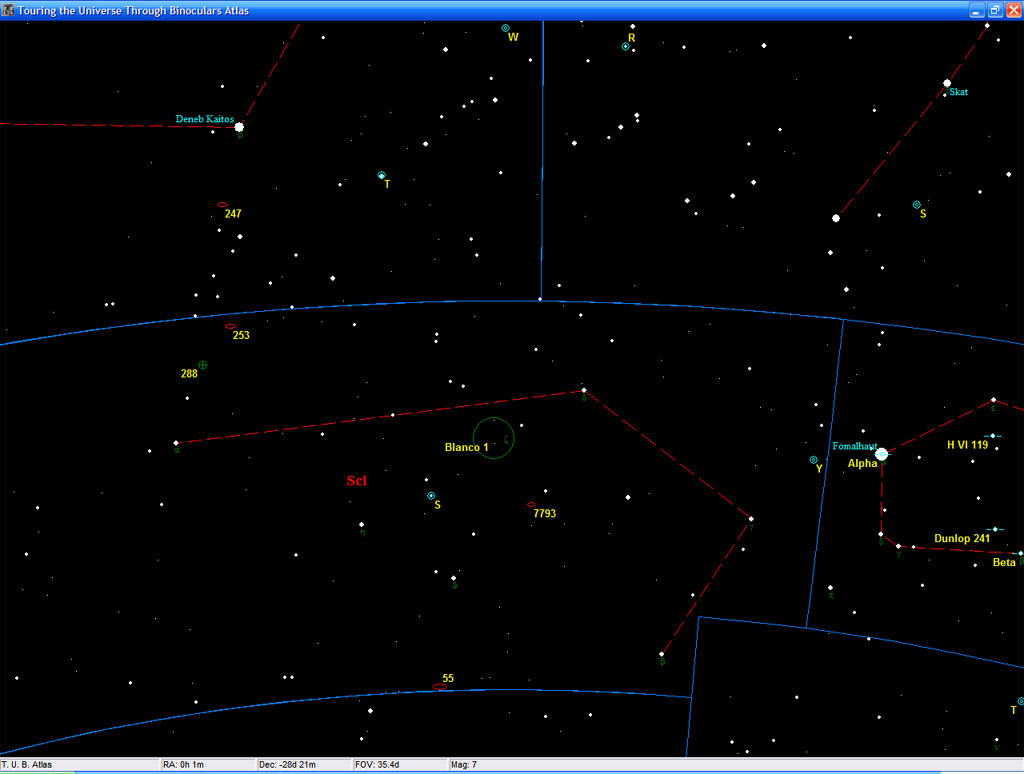 Above: Finder chart for this month's Binocular Universe. Chart adapted from Touring the Universe through Binoculars Atlas (TUBA), www.philharrington.net/tuba.htm

Let's begin with NGC 253, a breathtaking galaxy that is often described as the southern hemisphere's answer to the Andromeda Galaxy. To find it, first find orangish Diphda, also shown as Deneb Kaitos on many star charts, including the detailed finder chart above. It is well south of the Great Square of Pegasus and northeast of Fomalhaut. From here, move 7° due south to the galaxy. A prominent right triangle of three 5th-magnitude stars lies at the halfway mark.

Even from northern observing sites, NGC 253, sometimes called the Silver Coin Galaxy, stages an impressive performance. The galaxy's elongated spiral-arm disk is readily apparent through my 10x50 binoculars, but I cannot make any sign of a centralized core. Instead, it appears uniformly bright from tip to tip.

Once you're ready to move on from NGC 253, head back north to that triangle of 5th-magnitude stars. There’s another large, though fainter galaxy about a degree north of the triangle's easternmost tip. Since NGC 247 measures about 20'x7' across, its weak, 9th-magnitude light is spread pretty thin, dropping its surface brightness. This means that you’ll need a clear sky free of horizon-hugging haze to spot its dim presence. Even then, you may only detect the central core and perhaps just a wisp of the spiral-arm halo.

A third galaxy, NGC 55, would also be far better known were it not for its extreme southerly declination and great distance from bright finder stars. If viewed from a southern vantage point, however, this galaxy is sure to become a seasonal favorite. NGC 55 is most easily located by starting off at Fomalhaut. Slide about a binocular field southeast to 4th-magnitude Gamma Sculptoris, then 6 degrees farther southeast to 4th-magnitude Beta Sculptoris. Finally, shift 7 degrees east-southeast to a close-set pair of 7th-magnitude stars, then another 1.5 degrees farther east to NGC 55. If you are located south of about latitude +30°, NGC 55 might be easier to find by starting at 2nd-magnitude Ankaa (Alpha Phoenicis), which is about 4 degrees to the galaxy's southeast.

When the galaxy rides highest in the sky, steadily held binoculars reveal its long, faint, needle-thin disk. Like NGC 247 and NGC 253, NGC 55 is a member of the Sculptor Group of Galaxies, the closest galaxy group to our own Local Group. Other members of the Sculptor Group, all too faint for our binoculars, include NGCs 300, 675, and 7793, as well as several smaller systems. All are about 10 million light years away.

Here are two final targets this month that are much closer to home. First, did you happen to notice a faint blur in the same field as NGC 253, to the galaxy's southeast? If so, then you saw globular cluster NGC 288. Like NGC 55 (and probably NGC 247, as well), you'll need to use averted vision to spot this challenging target. But when viewed under ideal conditions, NGC 288's hazy disk is unmistakable. And consider that, when you look its way, you are looking toward a celestial outcast. While most globulars are gathered around the Milky Way's central core, NGC 288 is very near the south galactic pole.

Finally, we have a second celestial outcast, Blanco 1, an ill-defined open cluster in central Sculptor named in honor of its discoverer, Victor M. Blanco. Blanco discovered this cluster in 1959 while he was a professor at Case Western Reserve University. He later went on to become the second director of the Cerro Tololo Inter-American Observatory in Chile.

Even though its 30 stars are set against an empty region close to the south galactic pole, Blanco 1 doesn't look much like an open cluster. Binoculars show about a dozen points brighter than 8th magnitude as well as a smattering of fainter suns, all within the group's 90' of arc span. Highlighting Blanco 1 and acting as a beacon to show us the way is 5th-magnitude Zeta Sculptoris, which is superimposed in front of the cluster.

The table below gives details of these objects as well as others in the area. Give each a try and be sure to post your results in this column’s discussion forum.

Be sure to post your observations and sketches in this article's discussion thread or drop me a line at phil@philharrington.net. And until next month, remember that two eyes are better than one.

Phil Harrington's Binocular Universe is copyright 2011 by Philip S. Harrington. All rights reserved. No reproduction, in whole or in part, beyond single copies for use by an individual, is permitted without written permission of the copyright holder.