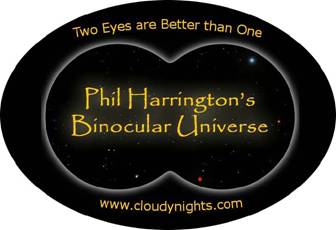 The three brilliant stars of the Summer Triangle -- Vega, Deneb, and Altair -- ride high in the sky this month, framing the gentle glow of our Milky Way galaxy as it stretches from horizon to horizon.  If there is a better way to spend a late-summer's eve than sitting back and slowly scanning this hazy band of light through binoculars, I don't know it.  Even the least expensive binoculars out there will reveal swarms of distant stars.

One of my favorite star-bunches inside the Triangle is easy to spot through binoculars, and even with the unaided eye if you know exactly where to look.  Begin at Altair, the Triangle's southernmost star.  Draw an imaginary line between Altair and the two fainter stars set to either side.  Extend the line toward the northwest for about twice its length into the neighboring constellation Vulpecula.  There, you should spot a tiny flock of about 10 stars.

Once you find it, take a careful look through your binoculars.  Does its shape remind you of anything?  If not, go back inside, look in your bedroom closet, and then try again.  That's right, you have found the sky's Coathanger.  The Coathanger is drawn from six stars aligned in a straight line that form the coathanger's cross bar, and another four that curve away to create the hook.

Historical records show that the Coathanger was known as far back as 964 AD, when the Persian astronomer Al Sufi noted its misty appearance.  The group was rediscovered by Giovanni Batista Hodierna in the mid-1600s, but it was skipped entirely by Messier and the Herschels.  That was probably because its large apparent size caused them to scan right past it with their long focal-length telescopes and narrow-field eyepieces.  Sorry guys, your loss!

You may also know the Coathanger by a second nickname, Brocchi's Cluster. Back in the 1920s, Dalmiro Brocchi, an amateur astronomer from , became famous for drawing detailed finder charts for hundreds of stars in the American Association of Variable Star Observers' (AAVSO's) program.  One particular chart showed this area in detail, capturing the group in print for the first time.  It was later named in his honor.  That chart also led to it being included as Collinder 399 (abbreviated Cr 399) in the 1931 catalog of scattered open star clusters compiled by Per Collinder. 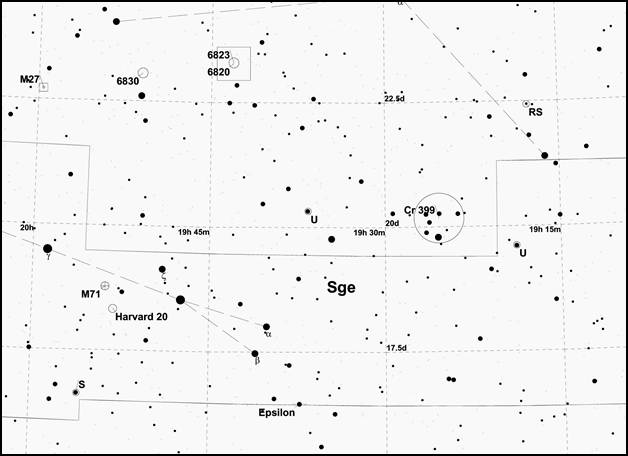 Finder chart for the Coathanger.  Chart from TUBA, www.philharrington.net/tuba.htm

But guess what? Brocchi's Cluster isn't a cluster at all! Much more recent data gather by the European Space Agency's Hipparchos satellite suggest the stars are just an asterism, a chance alignment of random stars that lie anywhere from 220 to 1,100 light years away. I find that realization very disappointing, but regardless of whether the Coathanger is a true star cluster or a celestial fraud, it is still a wonderful sight through binoculars. Seven- to 10x glasses give the best view, showing the Coathanger surrounded by a rich field of stardust.

Of the ten stars in the coathanger's upside-down outline, most appear pure white through binoculars.  Two, however, may show a slight yellowish or orangish glint to observers with keen color perception.  The brightest star in the pattern, labeled as 4 Vulpeculae and shining at magnitude 5.1, is an orange spectral type K0 sun, while the star directly adjacent to it in the hanger's hook is a spectral type K5 star.

The drawing also shows a phantom open cluster; that is, a phantom in my 10x50 and 16x70 binoculars.  NGC 6802 lies just east of the Coathanger, but I have never been able to see any hint of it through anything less than 80-mm binoculars, and then only under very dark skies.  While 50 stars are compressed within its 5' boundary, the brightest only shines at 11th magnitude.  Most are fainter than 13th magnitude, placing them well beyond the reach of 100-mm giants.  Instead, they show just the faintest wisp of blended starlight in the form of a slightly oval smudge.  Can you spot this challenging target?

If NGC 6802 proved to be too faint, try your luck with M71, buried within the Arrow, Sagitta.  Since its discovery in 1775, M71 has proven to be a difficult object to classify.  Many older references still designate it as a very dense open cluster similar to M11 in Scutum, but most modern authorities agree it is a globular.  Regardless of its true nature, binoculars disclose only a subtle glow set a very pretty field of glittering stardust.

Have a suggestion for a fun binocular target that you'd like to share?  E-mail me at phil@philharrington.net.  Until we get together again next month, enjoy the beauty of the late summer sky.  And remember that two eyes are better than one.

Phil Harrington, author of Touring the Universe through Binoculars, is currently completing a new observing guide of challenging observing targets for Cambridge University Press, which will be published in late 2010.  Visit his web site at www.philharrington.net