Of the dozens of open star clusters that dot the autumn sky, none is more popular among binocular stargazers than NGC 869 and NGC 884, the famous Double Cluster in Perseus.  Even from suburban backyards, this striking pair can be seen with the naked eye as a faint, elongated smudge of light about halfway between the "W" of Cassiopeia and the northern "tip" of Perseus.  If you have trouble spotting it, scan through your binoculars along a line extending from Gamma (ã) Cassiopeiae, the center star of the W, through Ruchbah [Delta (ä) Cassiopeiae] and continuing toward the southeast.  Maintain a straight course and you will see both clusters as two tiny clumps of stars.

Few autumn clusters compare to either NGC 869 or NGC 884 singularly, but when you add both together, the field literally overflows with stars.  Unlike many star clusters, however, which need telescopes to be seen at their best, NGC 869 and 884 are just as wonderful through binoculars. In fact, in my opinion, while they are still impressive through telescopes, the narrower views of most telescopes sacrifice the area's overall beauty.

Seven- to 10x binoculars resolve each cluster into a tight knot of white stars against a star-strewn backdrop.  Higher-power giant binoculars only improve the view by increasing resolution as well as heightening the radiance of the many colorful red supergiant suns that are scattered across the region.

Recently, I had a chance to watch the clusters through a pair of monstrous 100-mm binoculars as they just rose above some far off pine trees.  The field teemed with stardust, spilling over and around the distant pines.  The view was magnificent, creating a magical moment that could never be captured in an image, but whose image is forever filed away in my mind's astronomical photo album.

Whoever discovered the Double Cluster is lost to history, although we do know that their combined presence attracted the eyes of stargazers as far back as the second century B.C., when Hipparchus made mention of them in his notes.  Messier apparently knew of the Double Cluster, but never recorded them in his catalog.  Why he ignored them, but included M40 (a double star in Ursa Major) and M73 (a four-star asterism in Aquarius), is difficult to understand.

Are the two clusters actually physically linked to one another?  They almost certainly have some mutual gravitational effect, since NGC 869 (the westernmost cluster) is 7,100 light years away, while NGC 884 is slightly farther at 7,400 light years.  Both are primarily composed of hot type-A and type-B supergiant, superluminous stars.  Some 200 suns call NGC 869 home, while NGC 884 is made up of about 150 stars.  Several red supergiants are seen in NGC 884, but are conspicuously absent in NGC 869. 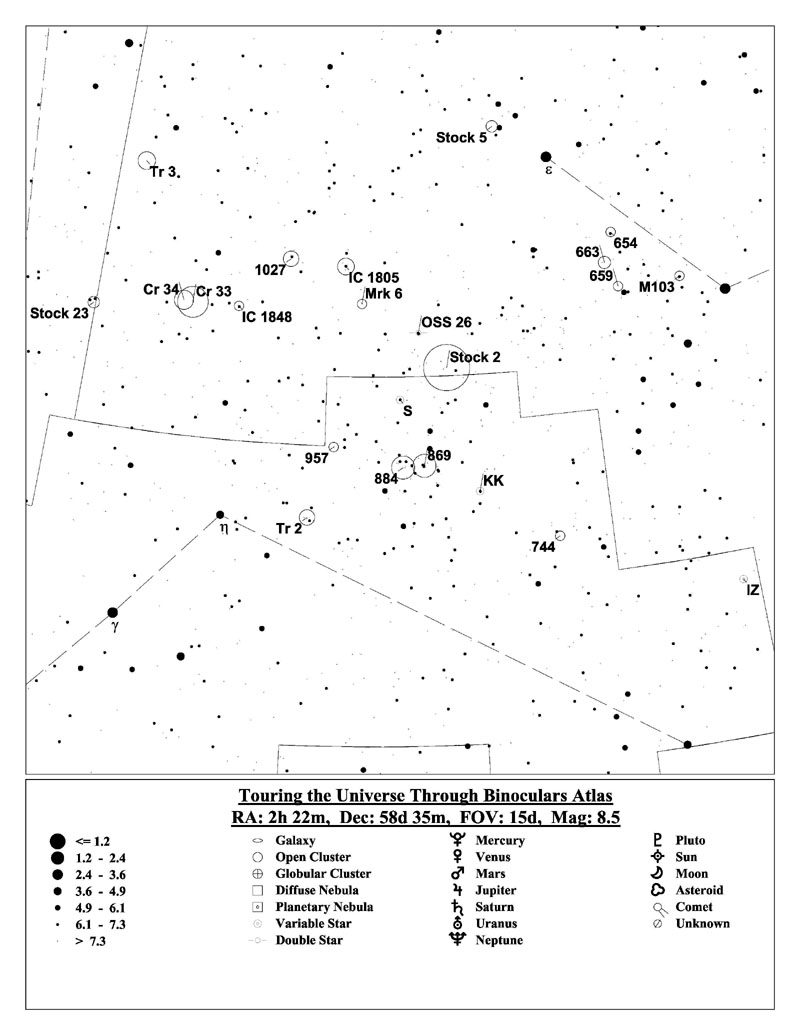 Once you have had a chance to enjoy the Double Cluster, follow an arc of stars to the north, crossing into Cassiopeia.  Look there, about 2° north of the Double Cluster, for a clumping of faint stars that form an X-shaped pattern.  That's Stock 2, a little-known open star cluster that stands out remarkably well through binoculars despite its crowded surroundings.   Stock 2's fifty member stars cover a full degree of sky, the same as two full moons stacked end‑to‑end.  About 20 of these stars can be resolved through 7x binoculars, although they only shine between 7th and 9th magnitude.

Take a long, careful look at the stars in Stock 2.  Let your imagination run wild for a moment.  See any pattern among them?  Careful scrutiny will show that the stars seem to fall into four distinctive threads curving away from the center.  My buddy John Davis from , mentioned to me more than 20 years ago that the brighter stars almost look like a headless stick figure flexing his muscles, christening it the "Muscleman Cluster."  His legs stretch out in two straight lines to the east, while his flexing arms curve to the west, above his long, albeit headless neck.  Others remark that the pattern is more reminiscent of a pirouetting ballerina, again sans head.  Muscleman or ballerina not withstanding, the next time you are drinking in the beauty of the Double Cluster, be sure to swing northward and spot Stock 2 in the same field of view.

The star chart here shows several other open clusters lying in wait, as you can see from the list above.  All are smaller and fainter than the spectacular Double Cluster, but are still well worth hunting down.  Take a look at each and let me know what you find.  Post your observations in this article's discussion thread or drop me a line at phil@philharrington.net.

Until next month, remember that two eyes are better than one.