Most of us probably learned to recognize the Summer Triangle early on in our astronomical careers.  But how about the Winter Triangle?  The Winter Triangle is drawn from three of winter's brightest stars - Betelgeuse, Sirius, and Procyon.  While they blaze on clear winter nights, they frame a surprisingly barren part of the February sky. This vast empty region is labeled as Monoceros the Unicorn on many sky maps, although I doubt that many of us are able to see such a whimsical creature among the dim stars. 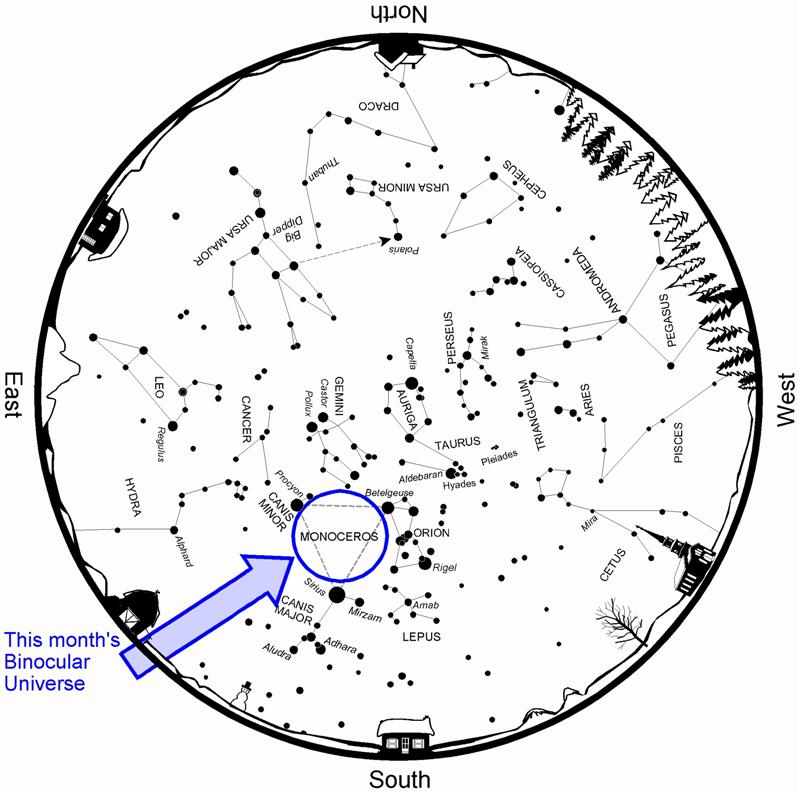 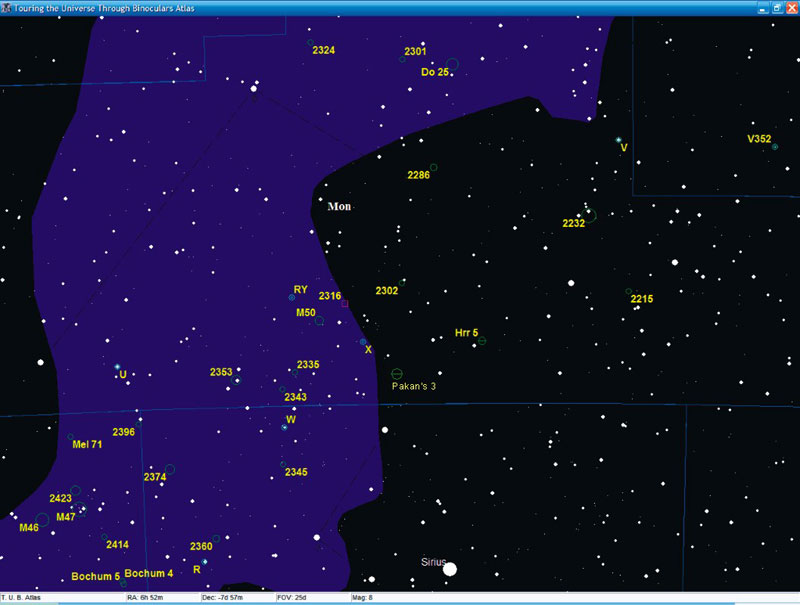 Monoceros may not hold much for constellation watchers, but it overflows with open star clusters for us binocularists.  Despite the fact that many are visible in binoculars, only one found its way into Charles Messier's eyepiece field.  That's our first target, M50.  Even though it lies in the middle of nowhere, M50 is surprisingly easy to find.  Begin at Sirius and slowly scan northeastward toward Procyon. Stop a little less than halfway along and look for a tiny blur of starlight punctuated by possibly one or two dim points.  That's M50.  The brightest cluster star, lying just south of center, shines at 8th magnitude and may appear faintly golden through 80-mm and larger binoculars.

Before we leave M50, try your luck with Pakan's 3, a fun asterism first spotted by amateur Randy Pakan from .  Depending on your binoculars, it might be in the same field as M50, since both are only separated by only 3 degrees.  Put M50 in the northeastern part of your view, and then look to the southwest for a collection of faint stars that together form the number 3.  The figure covers an area equal to that of the Full Moon, so it's large enough to be pretty obvious through binoculars.  But since none of the stars shine brighter than 8th magnitude, moonlight as well as light pollution could play havoc.  Wait for that special, dark February night to try your luck.

Now, up stakes and continue on your way toward Procyon.  Before you reach it, you'll first bump into Delta Monocerotis. Binoculars easily show that 4th-magnitude Delta is accompanied by 5th-magnitude 21 Mon just to its northwest.  They make a pretty, if not faux, double star.

Place Delta and 21 toward the eastern limit of your field of view and then look toward the western edge. Can you just make out a half dozen or so faint points lined up in an undulating north-south procession?  If so, you've spotted NGC 2301, one of my favorite little "unknown" clusters.  My 10x50 binoculars show those half dozen stars and a slight background glow from fainter cluster suns, while my 16x70s further resolve that glow into a north-south string of 8th- and 9th-magnitude stars marked at mid-span by a hazy triangular clump of many stars that remain too faint to resolve.  In my book Touring the Universe through Binoculars (1990: John Wiley & Sons), I call this the "Great Bird of the Galaxy" Cluster.  The "bird's" two wings are represented by the string of stars extending from the three-sided body.  Can you see it, too?  Or am I crazy??

From Delta, shift 12 degrees southwestward toward Beta and Gamma Monocerotis.  Nearby, you'll find NGC 2232.  This open cluster contains 5th-magnitude 10 Monocerotis as well as many fainter stars.  My 10x50 binoculars display the remaining stars, which range between 8th and 10th magnitudes, as lying in a curved cone-shaped pattern that opens toward the southeast.  With an apparent diameter nearly equal to that of the Full Moon, NGC 2232 is actually better appreciated through giant binoculars than through most telescopes.  At least, that's my opinion.

I first bumped into this next little asterism more than 20 years ago as I was researching Touring the Universe through Binoculars.  I simply listed it in the book as "Harrington 5" (Hrr 5 on the chart here), being the fifth entry in a compilation of a dozen asterisms described in that book.  Later, I came to think of it as the "Unicorn's Horn," given its constellation.  Call it what you wish, this V-shaped group is composed of six stars of 9th and 10th magnitude.  Due to both their dimness as well as the compact size of the "horn," 11x is probably the lowest power that will show the pattern well.  It's nearly centered on the finder chart above.

Here is a list of many more targets within the Winter Triangle.  Give each a go and see just how many you can find this month!  And be sure to post your results in this column's discussion forum. 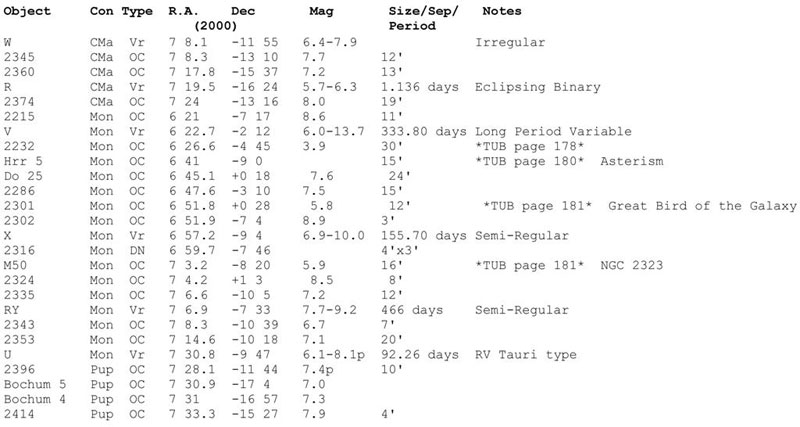 Next month, spring is in the air -- well, almost.  Until we meet again under the stars, here's hoping that you can grab those binoculars and get in some quality star time this month.  And of course, remember that two eyes are better than one.