Over the years, this column has included several off-the-beaten-path objects that go ignored in most observing handbooks. This month, I’d like to continue that tradition by paying a call on the first three entries in a catalog of open star clusters published in 1930 by Swiss-American astronomer Robert J. Trumpler.

Born in Zurich on October 2, 1886, Trumpler earned his Ph.D. in 1910 from Germany's University of Göttingen. Five years later, he had emigrated to the United States and joined Allegheny Observatory in Pittsburgh, PA. There, he began his study of open star clusters. Those investigations continued after he moved to California's Lick Observatory in 1918.

Trumpler's research examined cluster distances, dimensions, and space distribution. He found that the stars in more distant groups were dimmer and appeared redder than their spectral class said they should be. This stellar reddening is caused by the light from those stars passing through space pollution in the form of cosmic dust. These clouds absorb much of the starlight, especially at shorter wavelengths. His preliminary findings were published in issue number 420 of the Lick Observatory Bulletin. The entire article can be found by following this link.

His investigation included 100 open star clusters. Most of these belong to the NGC, but over the course of his research, he discovered 37 previous unrecognized groups. Today, we recognize those as the Trumpler catalog of open clusters.

The first three entries in Trumpler's catalog form a triangle framing portions of Cassiopeia and Perseus. All three are visible through binoculars with careful study. 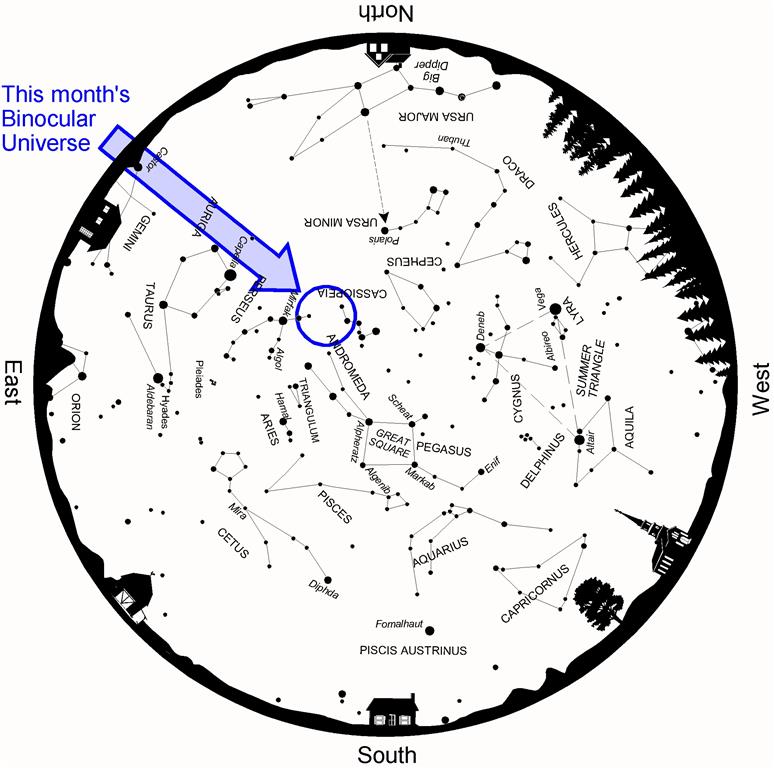 Above: Autumn star map from Star Watch by Phil Harrington. 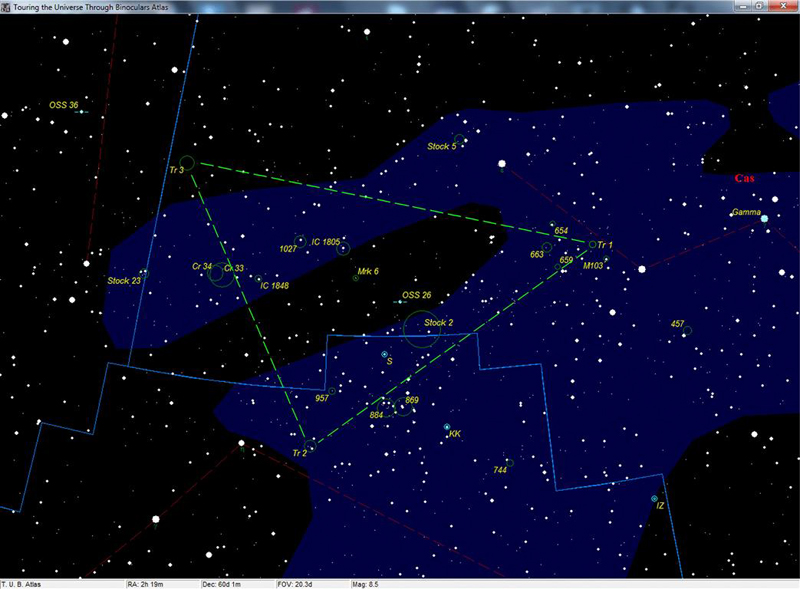 First up, we have Trumpler 1 (abbreviated Tr 1 on the finder chart). Of the three Trumpler clusters here, this one is the toughest to see. That shouldn’t come as a surprise. After all, it was also missed by Messier, the Herschels, and every other observer before Trumpler. To see if you can best the Herschels, first locate 9th-magnitude HD 9696. Then, using averted vision, glance just 7’ to the star’s west. See anything? I do not through my 10x50s, but my 16x70s show just the faintest suggestion of something. That something is the cumulative glow of the cluster’s three brightest members, none of which crack 11th magnitude. A telescope will reveal all three bunched into a small right triangle, along with four still fainter stars evenly spaced in a straight line. If you have giant binoculars, give Trumpler 1 a go and see what you see.

As you can tell from the chart here, Trumpler 1 is smack dab in the middle of the action, surrounded by open clusters M103 and NGCs 654, 659, and 663. M103 and NGC 663 are the easiest of the bunch to see through binoculars, and in fact were featured in this e-column back in November 2011.

The others, NGC 654 and NGC 659, are difficult to identify through binoculars, although the former is a bit easier to distinguish. My 16x70 binoculars expose a small smudge very close to 7th-magnitude HD 10494. The latter cluster is visible as little more than a tiny suggestion through the same binoculars, and then only with averted vision. Neither group shows any hint of individual stars. Their poor performance is due in part to cosmic dust littering the space between us and the clusters.

Trumpler 2 is a much more pleasant open cluster through most binoculars. Lying some 2° west of Eta Persei at the constellation's northern "tip," this group is comprised of 20-something blue and white stars shining at 7th magnitude and fainter. About half of these are bright enough for me to count individually through my 10x50s. Most congregate near the cluster's southern perimeter and are set in a rectangular pattern.

I would be remiss if I didn’t pay homage to the Double Cluster, which you passed on the way to Trumpler 2. I blame the Double Cluster for causing me (and most observers) to ignore Tr 2. But I guess that’s forgivable. After all, few sights in the heavens top the Double Cluster through binoculars. I always give it a quick visit every time I head out at this time of year. What a view! With my 10x50 binoculars, each cluster -- NGC 869 to the west and NGC 884 to the east -- looks like a tight knot of white stars against a star-strewn backdrop. Higher-power giant binoculars only improve the view by increasing resolution as well as heightening the radiance of the many colorful red supergiant suns scattered across the region.

And while we are here, let’s not forget to say “hello” to the Muscleman. Plotted as Stock 2 on the chart, the Muscleman reference was coined by my friend and long-time deep-sky observer John Davis from Amherst, MA. More than a quarter century ago, Davis noticed how the cluster’s brighter stars fall into a pattern that looks like a headless stick figure flexing his muscles. His legs stretch out in two straight lines to the east, while his flexing arms curve to the west, above his long, albeit headless neck. Be sure to revisit my November 2009 e-column for more on the Double Cluster and the Muscleman.

But for now, let’s continue on toward the northeast. On our way to Trumpler 3, we’ll pass IC 1848, Collinder 33, and Collinder 34. Admittedly, through binoculars it’s all but impossible to tell exactly where each starts and ends. The surrounding area is so overrun with stars that isolating the clusters can be an exercise in futility. My best recommendation? Just sit back and take in the magnificence of the entire area.

Photographs reveal that all three clusters are intertwined within a swirling complex of ionized hydrogen that has been nicknamed the Soul Nebula. Has anyone ever seen the Soul Nebula through binoculars? I haven’t, nor do I know anyone who has. But that’s your challenge this month! If you find yourself under exquisitely dark, transparent skies, give it a go. If you do spot its faint glow, then IC 1805 to the west should also be visible. IC 1805 is nicknamed the Heart Nebula for its appearance in deep photographs. You may not see the nebulosity through your binoculars, but you should see the stars that energize the clouds, cataloged separately as open cluster Collinder 26. Their brightest member shines at 8th magnitude and lies inside an equilateral triangle of fainter stars.

Open cluster NGC 1027 is just 1° east of IC 1805/Collinder 26 and well within our Trumpler triangle. Here, binoculars uncover a tight swarm of faint stars buzzing around the group’s brightest sun, 7th-magnitude HD 16626. Both ICs, the Collinder trio, and NGC 1027 all fit into the same binocular field and blend into a wonderful tapestry of stardust, especially when they high in the sky.

Finally, we arrive at Trumpler 3. My 10x50s show a hazy grouping of five faint bluish-white stars about 9° due east of Epsilon Cassiopeiae in the Queen's W. The entire region is strewn with stardust, creating a marvelous sight under dark skies. Again, drink in the surroundings; there is plenty to see. For instance, you may notice a pretty arc of stars just to the cluster’s north.

As you can see from the list below, there are many other targets within and around Trumpler’s triangle. Use the list below to explore the area the next chance you get.

Questions, comments, suggestions?  Let’s talk!  Post them in this blog’s discussion forum or please e-mail them to me following the link above. So, until next month, tell your friends that for stargazing, two eyes are better than one.

Phil, Thanks for the brush up of this beautiful region of the sky, particularly the Trumpler Triangle and its historical background.  There is much to see, and the double cluster is such a predominant jewel that the others are often passed over.  It helps that you have made this list for better appreciation.  One cluster that I use frequently from your list at public events is NGC457.  We call it the ET Spaceman cluster.  It's a big crowd pleaser even though the ET movie is nearly 33 years old.

Thanks!  And yes, this is a great region to just sit back (or lie back if you prefer) and just soak it all in!

Hi Phil, Is OSS 26 the same as the double star system STTA 26A? Thank you.

I too show the cluster NGC 457 at public star parties.  I tell folks it is the "Lobster Cluster".  He has two eyes, claws that curve and wrap up and around his head and lastly his tail fans down below in a straight line.

I found people seem to be more engaged when they are trying to find an object in the eyepiece based on ones description prior to looking.  They thrill at seeing the objects description come to life in their eye!

And besides, the lobster cluster sounds more fun fun to look at that NGC457, right?