If you were asked to name the greatest visual observer of all time, who would you choose?  My vote would have to go to the 18th-century astronomer, William Herschel.  He had quite a track record, including the discovery of the planet Uranus as well as thousands of deep-sky objects.  That's a pretty good run.

Herschel did more than just look at the sky, however.  He also tried to understand what he was looking at.  Based on his studies of how stars appear distributed along the hazy band of the Milky Way, Herschel was the first to conclude that the Milky Way was shaped like a flattened disk.  We know today that he was exactly right.

When it came time to knowing his place in the Milky Way, however, Herschel was way off.  He noticed how stars appeared to be evenly distributed along the Milky Way.  From this, he reasoned that the Sun must be in the very center.  Of course, that is completely incorrect.  That’s because, unbeknownst to him, cosmic dust blocked his view (as well as ours) along the plane of the Galaxy beyond about 6,000 light years.

It would be another century and a half before Harlow Shapley would discover our solar system's true position in the Milky Way.  Studying the distances to globular clusters, Shapley found that most seemed to be distributed in a spherical volume not centered on the Sun, but instead on a distant point in the direction of the constellation Sagittarius.  He concluded that globular clusters must hover around the core of the Milky Way, which we know today to be correct.

While most of the Milky Way's globular clusters are still a month or two away from our early evening sky, we have two magnificent systems this month to whet our appetites for things to come. 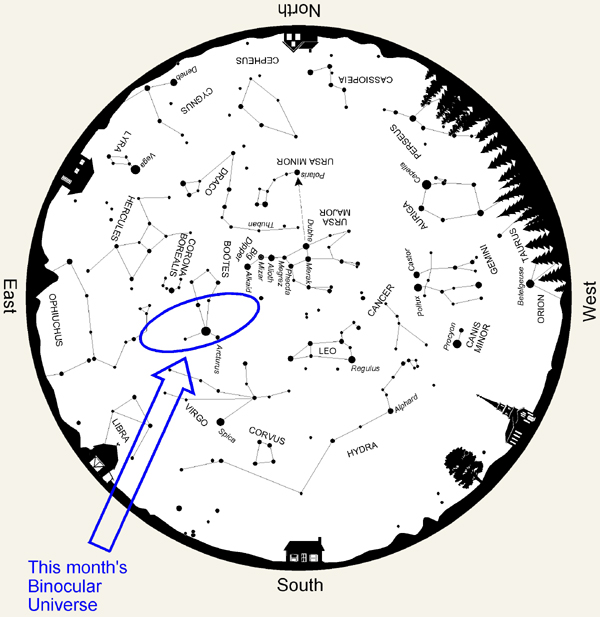 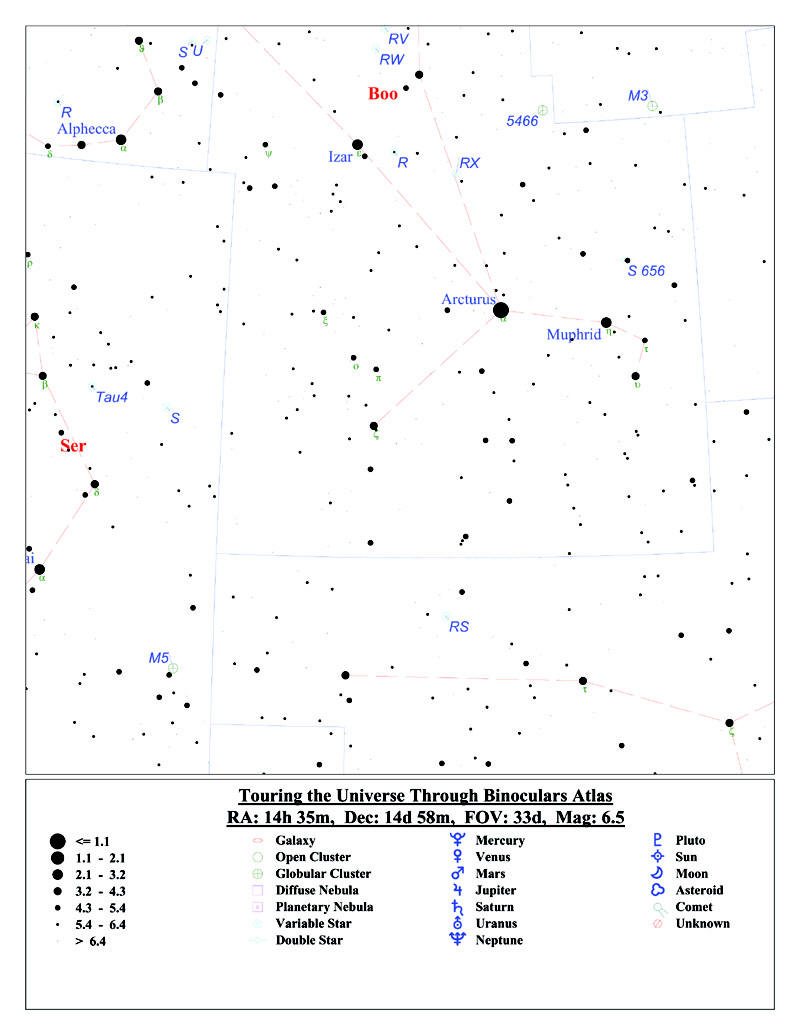 Let's begin with M3, the object that started it all.  It was his accidental sighting of this distant globular on May 3, 1764, along with his earlier discoveries of another globular cluster in Aquarius and the Crab Nebula in Taurus, that sparked Charles Messier's interest in compiling his now-famous catalog of comet look-alikes.

To find M3 for yourself, aim your binoculars halfway between Arcturus in Boötes and Cor Caroli in Canes Venatici.  Look there for a right triangle of three dim stars pointing toward the southeast.  Spot it?  Take a close look at the point marking the right angle itself.  Notice how it is not a perfect point of light, but rather a tiny, fuzzy blob.  That's because you're not looking at a single star; you're actually viewing the combined glow of M3's crowd of stars.  None of those suns shines brighter than about 13th magnitude, however, so resolving any individuals will have to wait for a telescope's aperture and magnification.

M3 contains more than half a million stars, making it one of the largest members of the Milky Way's family of globular clusters.  It is also one of the richest in terms of variable stars, notably RR Lyrae variables.  Like the better known Cepheid variables, RR Lyrae stars have a very precise period-luminosity relationship.  The faster the star's brightness varies, the greater its inherent luminosity (or “wattage”).  If you know a star's luminosity as well as its apparent magnitude, its distance can be easily calculated using the inverse-square law.  Doing just that, astronomers place M3 at 33,900 light years from Earth.  That puts it beyond the core of the Milky Way.

The second globular cluster featured this month is M5, located in westernmost Serpens.  To find M5, return to Arcturus, and then slide southeast to 4th-magnitude Zeta Boötis.  Continue from there twice the distance along a slightly more easterly course until you come to a not-quite right triangle of stars.  The triangle's brightest star, positioned at the not-quite right angle, is Unukalhai (pronounced “oo-nook-ul-high,” and also known as Alpha Serpentis).  Unukalhai shines at magnitude 2.6.  Turn to the southwest, toward 6th-magnitude 5 Serpentis.   M5 lies just to its north-northwest.  Like M3, it should be visible in your binoculars as a fuzzy star.

By analyzing light from the cluster's individual stars, astronomers have determined that M5 is one of the Milky Way's oldest globular clusters.  Just how old is old?  These spectroscopic studies show that even the cluster's lowest mass stars, which remain on the Main Sequence for billions of years, have begun to evolve into red giants.  This has led many to estimate the cluster's collective age as perhaps 13 billion years.  Since the universe itself is believed to have formed 13.7 billion years ago, the stars in M5 are first generation.

As you gaze toward M3 and M5, just imagine what it would be like to live on a planet inside one of the clusters.  That is just what science fiction author Isaac Asimov did his story Nightfall, a tale about Kalgash, a planet orbiting a six-star system within a globular cluster.  And we think that we have trouble with light pollution!

Finally, there are several stars to the south and east of M5 that, if added together, remind me of a sailboat.  Picture 5 Serpentis as the boat’s bow, while 6 and 8 Serpentis mark the deck.  The hull extends to 4 Serpentis and SAO 140444, the faintest star in the asterism.  Finally the sails’ mast extends east-northeast from 6 to 10 Serpentis.  If you happen to pull an all-nighter this month, come back to M5 as it approaches the western horizon, around 3 AM local time. That’s when the Serpent’s Sailboat asterism will be most apparent.

Next month, we dive deep into the summer Milky Way.  Until then, remember that two eyes are better than one.