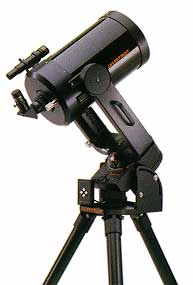 From the Editor's Desk articles are the opinions and musings of Allister St. Claire. These articles do not represent facts nor are they objective in any way.

The most popular telescope package in the history of astronomy was abandoned by Meade and Celestron. For reasons never explained, the non-GOTO fork mounted 8"SCT was phased out of production. This telescope served a segment of astronomers which the current GOTO only scopes can't. Namely, astronomers who desire a light weight SCT they can use to hunt down their own objects.

For decades astronomers flocked to the 8" fork mounted SCT. They provided a light weight and easy to transport alternative to the large and heavy EQ mounted newtonians. With the dobsonian revolution, astronomers had another choice. However, many astronomers still preferred the 8" SCT if for no other reason then it's integrated tracking.

So why am I not happy with my NexStar 8i SE?

As a reference point, I've owned 14 different SCTs. Of all of these, my current NexStar 8i has the best optics. It easily trounces my 4" APO on any target I've compared them on.

The GOTO is accurate and reliable. Once I complete the easy 2 star alignment, it will hit any target I care to enter. Since the NexStar 8i has a single fork arm, it even has the advantage of being useable around the northern skies. For those who don't remember, one of the disadvantage of a dual fork mounted scope in an EQ mode is it gets increasingly difficult to use the closer you get to Polaris.

Given all this I should be happy 8" SCT owner. But I'm not.

I strongly dislike the fact that I can't move the OTA manually. The NexStar 8i doesn't have clutches so the only way to move it around the sky is to slew it. My gripes about slewing are twofold;

I find all this maddening. I would rather have the simplicity of the fork mounted SCT where I can move the tube by hand. Once I get closer to the target, I can use the manual slo-mo controls to center my object of choice.

I'm also not fond of having to lug out a battery and cable to power the NexStar While the NexStar can use AA batteries, it chews through them like my daughter through a pack of gum.

As far as the GOTO system, I don't use it. It's not because the GOTO system doesn't work or is somehow difficult to use, I just like to find things on my own. My joy in astronomy is hunting objects down and the GOTO system robs me of that joy.

So what are my choices?

I could buy an EQ wedge and this would allow me to skip the GOTO alignment necessary for simple tracking. But it still doesn't get me around the problem of having to slew the telescope to move the OTA.

It seems to me that the exclusively GOTO fork mounted SCT is a fork in the evolutionary path of SCTs. Why is it companies feel compelled to phase out perfected products? The 8" fork mounted SCT represented decades of refinements and feedback from loyal users. As a purely visual instrument, it was a joy to use in hunting down and observing objects. At right around 26 lbs, even the weakest of us could haul it out and set it up in 30 seconds. The icing on the cake was the 9v battery which would power the RA drive for months at a time.

Given such a competitive market between Meade and Celestron, it always struck me as odd that both companies abandoned this telescope line within months of each other. Some larger market force must have been at work to lead both companies to discontinue production of these telescopes. Large successful companies do not make whimsical or irrational decisions. They both must have been looking at the same data and drew the same conclusions.

My guess is both companies saw a soaring rate in sales of the GOTO only fork mounted SCTs. Given that telescope sales as a whole are pretty much fixed year to year, such growth in GOTO SCTs came at the expense of sales of the non-GOTO scopes. At first brush this all seems like a pretty cut and dried reason to cease sales of the old scopes.

However, what initiated the increase in sales of the GOTO scopes was their decline in price. Up to this point, GOTO SCTs were priced substantially higher then the non-GOTO scopes. Like any other market share, once sales reach a critical level, refinements in production and volume of sales decrease the price of the item. At some point the selling price between the GOTO SCT and the non-GOTO SCT shrank. More to the point, the manufacturing cost of the two types of scopes was probably extremely close but the GOTO scopes could be sold for higher profit margins.

The soaring sales rates came from a pent up demand for inexpensive GOTO telescopes. Anytime an item goes through the decline in production price (mentioned above), a pent up market demand is tapped. A sales bubble appears for a period of time until this demand runs it's course. Everyone who has been eyeing product X but found it cost too much, can suddenly afford the product and rushes out to buy it. A perfect example of this is LCD computer monitors. A future example of this is plasma televisions.

The market misstep was to lump all SCT buyers into one homogenous group. To assume that everyone flocking to the recently priced dropped GOTO SCT was the entire SCT customer base. Nobody stepped back and asked the basic question "who are our SCT customers".

The market problem should be clear to see. An 8" dob costs $300. The least expensive fork mounted SCT is the NexStar i8 at $1400. If you happen to be one of those astronomers who want to find objects on your own, you won't buy a fork mounted GOTO SCT. You are now looking at dobs. However, unlike SCTs, there are many brands of dobs to buy. In ceasing to serve those SCT owners who don't want GOTO scopes, both companies gave up sales to the dob manufacturers. Once the market for inexpensive GOTO SCTs is saturated, both companies may find they've lost market share to other companies.

So here is my challenge. Right now the least expensive fork mounted SCT on the market is the Celestron NexStar 8i at $1400.00. Either Meade or Celestron should come out with their "old" fork mounted, RA driven 8" SCT at $799.00. This is almost half of what the least expensive GOTO 8" would cost. Consider it a loss leader but watch the sales closely. If sales are brisk, then whichever company takes up this challenge would differ from the other company. To further encourage customers, send a 1 time registration certificate with each of these entry level SCTs. If the registered owner should ever present it to an authorized dealer, they get $100 off any of the GOTO SCTs being sold. Talk about building customer loyalty and an upgrade path for them!

It occurs to me that if an astronomer wants to hunt down their own deep sky objects, they have no choice but to buy a dob. Goodness knows the way companies think, I may be writing an article 10 years from now lamenting the discontinuation of non-GOTO dobs. Heck, by then they may be voice driven so I can have the same fun experience as with a computerized phone routing system. Progress - blah!

So is it just me? Am I an old dog who just can't learn new tricks? I want to hear some opinions on this topic.