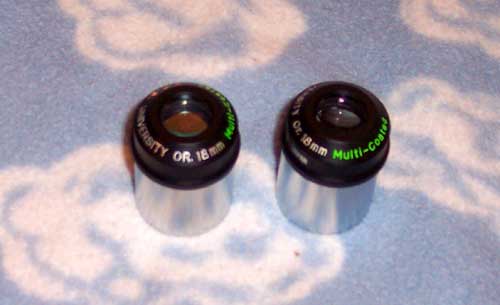 What are the Orthoscopic Planetary Eyepieces

The orthoscopic planetary eyepieces were conceived and designed by Mike Palermiti, owner of ITE Astronomy (www.iteastronomy.com). Mike's goal was to take the best planetary eyepiece (orthos) and enhance their ability to discern subtle planetary detail. To do this, a specialized filter coating was applied directly to the ortho lens. This filter coating achieves two goals;

When we view bright objects, our eye reacts in two ways that are pertinent to astronomers. First, our pupil contracts to protect our sensitive cones and rods which lie at the back of our eyes. Most of us are familiar with this as discussions of exit pupils are popular among amateur astronomers. The second reaction is less known. When the bright light hits our sensitive cones and rods, they can be overwhelmed. Once overwhelmed, our visual sensitivity drops and subtle details in what we are looking at are lost or smeared. The filter actually dims the image so these important details are not lost. However, unlike a standard filter, the resulting image is not compromised by poor quality filter glass

The coatings are a broad coating with visual peaks at wavelengths important to seeing planetary details. The coatings have peaks at 480nm, 550 nm and 580nm. Many reading this are familiar with light bulbs and how certain bulbs enhance the tones or details of a room. Such lightbulbs have peaks in certain wavelengths depending upon the goal desired. Take the same concept and you understand filter coating peaks.

How they actually worked

I asked Mike why he hadn't produced orthos in the lower focal lengths. Mike reports that through testing they have found that there is a drop in visual acuity when the exit pupil falls below 1mm. His testing (which he stands behind) has found that planetary magnification above 30x/inch of instrument aperture is wasted. No further detail is detectable and at a certain point rolls off and declines. The instruments ITE sells are mostly 1800mm focal length and above. As such, the 9mm was the lowest focal length they needed to complement their line of scopes (Maksutov-Cassegrains).

I obtained a sample of each of the planetary orthos and each of the standard UO orthos from Tim Hagan at Helix Observing Accessories. Tim was good enough to lend them to us for testing for a few months (thanks Tim!). I used them across a variety of objects in my 8" SCT. Here are my results.

These orthos have some real potential on the moon. They reduce the glare of light and are more comfortable to use when searching for lunar details. However, all 3 planetary orthos I was sent had their coatings end within 10-15% of the edge of the FOV. When viewed, this caused a very bright halo of landscape around the filtered FOV in the center 85%. It was impossible to ignore and highly distracting. It caused my pupils to contract from the brightness of the unfiltered edge of FOV dimming the center filtered FOV even further.

To add insult to injury, I noticed vague "spots" when viewing with the 9mm & 12mm planetary orthos. Taking them inside and using a flashlight, I found both eyepieces had uneven or partially deteriorated coatings on one of their internal lenses. Houston, we have a problem....

Undaunted by the problems discovered with Lunar observing, I sent the 9mm & 12mm OPS eyepieces back to Tim at Helix (who was extremely apologetic) and trudged on with planetary viewing with the 18mm OPS. I decided to use it and my 2x Ultima barlow on Saturn for magnifications of 110x and 220x with my 8" SCT.

Viewing Saturn at both magnifications, I noted two things the O.P.S. eyepieces did;

I requested but never received replacement O.P.S. eyepieces so I was unable to test further. Additionally, two other O.P.S. owners report coating issues on the eyepieces they received (CN eyepiece forum).

Overall I found the best results for lunar observing. Reducing the glare while bringing out additional detail on the lunar surface. For planetary viewing it's a tradeoff - you get slightly more emphasized bands but at the cost of some sharpness. For double stars it's a complete wash.

I want to extend thanks to Tim at Helix for lending me the eypieces and to Mike P. for taking the time to educate me on them.