As we transition from summer to autumn, let's try our luck with a taxing planetary nebula in an equally taxing constellation. IC 5217 lies among the faint stars of Lacerta the Lizard. Locating the nebula is a big part of the challenge because of its dim surroundings.

Its dimness and remote position likely led to the Herschels missing it as they surveyed the skies. It evaded detection until Williamina Fleming discovered it in 1904 while examining stellar emission line spectrum on a photographic plate taken at Harvard College Observatory.

To spot IC 5217, use a technique offered many years ago by Walter Scott Houston in his Deep-Sky Wonders column. Begin by finding a four-star keystone asterism formed by Alpha (α), Beta (β), and 4 Lacertae, as well as 5.4-magnitude SAO 34143, about 18° east-northeast of Deneb [Alpha (α) Cygni]. The keystone measures about 3° across, small enough to fit into just about any finderscope. IC 5217 is located slightly northeast of the center of the keystone, in the same low-power field as the very red 6.5-magnitude star SAO 34425. The planetary is nestled just 3' west of a slender isosceles triangle of 11th- and 12th-magnitude stars.

Since IC 5217 shines only at magnitude 11.3 and measures just 7 arc-seconds across, an eyepiece switch will be needed to pick it out once its field is centered in view. Through my 6-inch Schmidt-Cassegrain telescope at 96x, the planetary was disguised as a star-like point. Increasing magnification to 240x, however, expanded the nebula's disk enough to identify it positively from the surrounding field. It appears grayish at this aperture and round. Try blinking the field with an O-III filter to enhance the nebula's disk.

The planetary takes on a faint bluish tint through 12-inch and larger telescopes. But there is little hope of seeing the central star since it shines at magnitude 15.5. In fact, the central star remains unseen through even the largest amateur telescopes because of the nebula's brightness. At magnifications around 400x or higher, those same instruments, however, hint at this planetary's bipolar structure. Some describe it as a Figure 8.

IC 5127 is nicknamed the Little Saturn Nebula owing to its resemblance to the Saturn Nebula (NGC 7009) in Aquarius, when viewed through the largest backyard instruments and crazy high magnification. With steady seeing and viewing it at over 700x, observers have mentioned that the elliptical inner disk is surrounded by fainter extensions that are reminiscent of Saturn's rings, hence the nickname. (Although NGC 6886 in Sagitta is also sometimes given the same nickname.)

In his post of 16 August 2018, Iain Petrie (CN'er iainp) from St Neots, Cambridgeshire, UK, remarked that IC 5217 "seemed very small to me, and it took 900 magnification to see its elongation and the difference between the brighter core and the fainter shell." Photographs reveal a bright equatorial ring and fainter bipolar lobes that extend north and south. Take a look at his very impressive sketch below!

Finally, for those interested in the astrophysical aspects of this month's challenge, I would recommend reading IC 5217 as a Double-Shell, Point-Symmetric Planetary Nebula with a Very Narrow Waist by L. F. Miranda, S. Ayala, R. Vázquez, and P. F. Guillén [Astronomy and Astrophysics, 456, 591–597 (2006)].

Small, but memorable. A nice challenge as I recall. Unfortunately, I could not make out any resemblance to its name sake. For those who haven't seen it, go see it.

These little planetary's can be frustrating and a filter slide can really help. Unfortunately, the scope I was using last night, my 12.5 inch, is not equipped with one.

Last night I found myself back out n the high desert after my neighbor had his car totalled when he was rear ended. The moon set about 11 pm and IC 5217 was well positioned according to SkySafari. Phil is definitely right, finding it was a big part of the challenge.

I used my star hopping tricks including first identifying the magnitude 6 cluster NGC 7243 to be sure I was in the right region. It happened to line up nicely with IC5217 for star hopping.  Splitting 4 Lac and Alpha Lac in my 50 mm RACI finder put me very close. 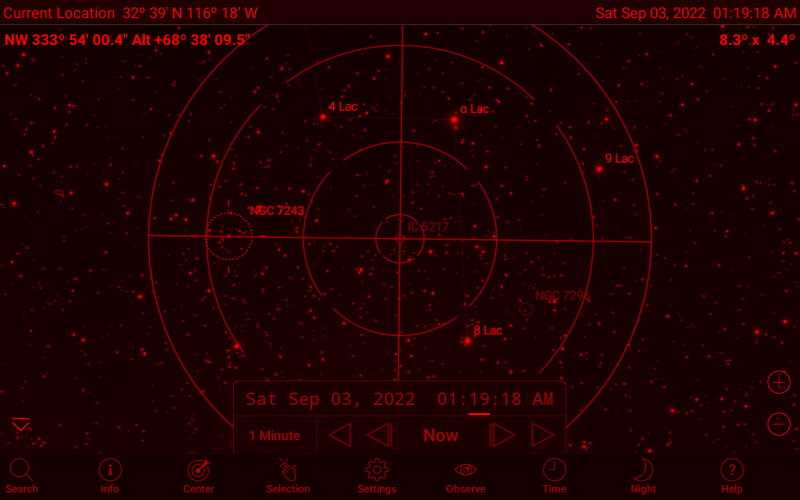 But actually identifying 5217 in the star field was the challenge. I knew I was close and I'd observered some unique chains in the area in the main scope at 93x so I went back to Sky Safari, found I was very close and working between SkySafari and the scope, I was able to identify a short path to an oval asterism with 5217 as a member. 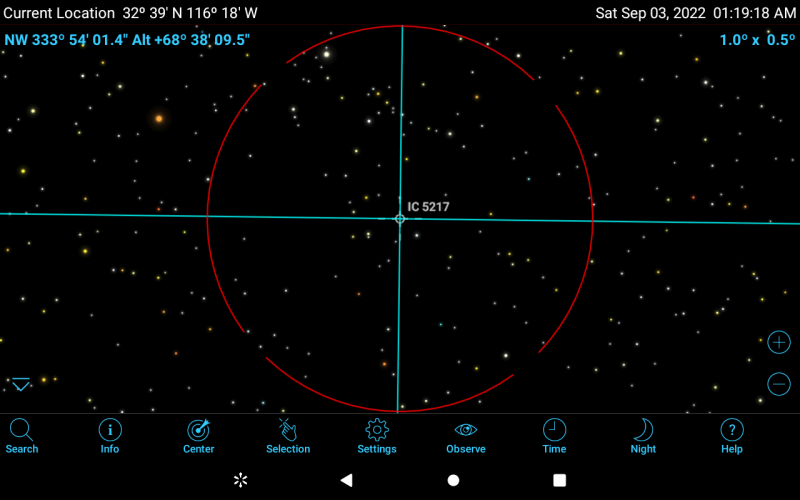 (Rotated 180° to match the Newtonian view)

Increasing the magnification, I was able to distinguish IC5217 as a non stellar object. It tried blinking it manually, holding the filter up to eyepiece with little luck. The seeing was so-so but I was able to get occasional glimpses of detail at 600x and 850x. It appeared to be slightly elongated with possibly a glimpse of a central star.

I'll be returning under better seeing with a larger scope.  These small planetary's are probably my least favorite deep sky objects, they're hard to find and identify and there's not a lot to be seen.

These small planetary's are probably my least favorite deep sky objects, they're hard to find and identify and there's not a lot to be seen.

Hi Jon, I enjoy trying to see these little planetary nebulae. They are difficult, to be sure, but also interesting objects in their own right. I suspect a more than a few are out of reach for my aperture, some I have attempted were just not visible. But not all of them. I was pleased with IC 5217 even though I never got a glimpse of its apparent similarity to NGC 7009. The ability to see the pinch or bifurcated appearance was exciting enough. Frosty Leo was another. It was not Hubble like visually, but you could see enough to tell it was the same object (obviously because it was).

I bookmarked Phil's challenge page. I dunno, I just love the challenge of seeing these enigmatic things. The hunt can be enjoyable not knowing what to expect. The anticipation is worth the star hop. Of course, I'd prefer to see something rather than nothing. IC 5217 didn't disappoint. I'm glad you got a look at it. I am not alone, and now we have the shared experience of having seen it. I'd wish that experience for others.