In last month's column, we paid a visit to the Moon and the crater pair of Messier and Messier A.  This month, we head back out into deep space to examine one of the most spectacular entries in Charles Messier's catalog: M13, the Great Hercules Globular Cluster.

There are few deep-sky objects more spectacular through a large telescope than globular clusters. Each globular cluster may contain hundreds of thousands to several million stars, all swarming together around a core so densely packed that seeing individual points may defy resolution. But the view is spectacular nonetheless.

To the casual eye, all globular clusters may look the same. Just a big ball of stars, right? Nothing could be further from the truth. Each has a personality all its own, often with hidden treasures lying within, if you take the time to look.

M13, the grand globular cluster in mighty Hercules, is the perfect example. It doesn't take a double-digit aperture to see that the stars of M13 are distributed asymmetrically. An 8-inch (20cm), and even smaller instruments, will show how the stars appear to be arranged into curves or rows. Many have likened the cluster's appearance to that of a spider. John Herschel described the cluster as exhibiting "hairy-looking, curvilinear branches." Later, Lord Rosse saw M13 as "more distinctly separated and brighter than anticipated; singularly fringed appendages to the globular figure branching out into the surrounding space."

Observing notes made while I was viewing through my 10-inch telescope at 58x recall irregular strings of stars streaming out from the cluster's dense core. Two thin threads curving away toward the west strike me as particularly conspicuous. These star-strings give the impression that M13 is hurtling through space so quickly that is it leaving a trail of stars behind in its wake.

Increasing the 10-inch's magnification to 181x reveals a surprise that goes unsuspected at lower values. The star streamers are still evident, but hidden within the core, southeast of the exact center, are three subtle dark lanes that seemingly join together to form the letter "Y." The combined effect is nicknamed the M13 propeller.

These unusual lanes, or propeller as many call them, were first discovered by Bindon Stoney in about 1850. At the time, Stoney was an astronomer working for Lord Rosse at Birr Castle in Parsontown, Ireland. After Stoney's initial sighting became known, many other observers confirmed the existence of these unique dark rifts through instruments as small as 6 inches (15cm) aperture. But as photography diminished the need for accurate visual observations, the M13 propeller became lost in the glow of the intense core.

Walter Scott Houston resurrected Stoney's dark lanes in his Deep-Sky Wonders column back in the July 1953 issue of Sky & Telescope magazine. His mention garnered little response at the time, however.  But thanks to his persistence, along with the Dobsonian revolution, the propeller started to become a popular challenge in the 1980s. Today, another three decades later, many of today's amateurs have seen the M13 propeller.

Most photographs of M13 do not show the propeller, however, because the cluster's core is usually so overexposed that they are absorbed into the glow. Yet by using a shorter exposure geared to resolve the core, the propeller can be seen.  I took the photograph here several years ago through a 100mm apochromatic refractor that I was reviewing for Astronomy magazine at the time.

For a successful visual sighting, magnification is key. Too low and the lanes will remain hidden from view.  To see the lanes for yourself, wait until the cluster is high in the sky, away from any haze and light pollution, which can stifle them. Under ideal conditions, the dark lanes are evident through a 12-inch, joined at their ends to resemble the corporate logo of a famous German auto maker -- proving once again that M13 is the Mercedes-Benz of globular clusters.

Have a favorite challenge object of your own?  I'd love to hear about it, as well as how you did with this month's test.  Contact me through my web site or post to this e-column's discussion forum.

Remember, half of the fun is the thrill of the chase.  Game on!

The presence of dust in globular clusters is well known but is controversial as to whether the dust is inside the clusters or is foreground dust seen in projection. I think the propeller dust formation is foreground dust. I discuss this in this paper: http://www.naturalph...dust-filaments/ 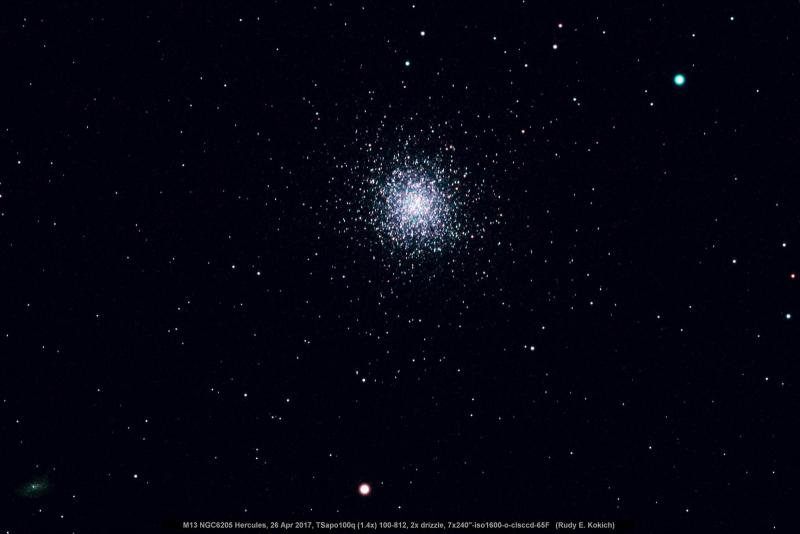 Phil, thanks for the article.

Here is a link to a thread on CN that has both an RGB and high resolution luminance image that shows the "propeller" on M13:

The part of the dusk lane that appears at about the 11 o'clock position is very well defined (best shown in the last post, #6).

Absolutely.  There are many, many forums here on CN for posting photos, sketches, and observations.  Probably best to start by visiting those under the Astrophotography and Sketching heading.  For general discussions of observations, head over to the Observing forums.

And welcome to CN!

Jul 05 2017 01:01 AM
I've observed M13 several times with an 18" dob. There are many more dark lanes around the periphery. Sometimes they appear to connect so that the propeller appears to be just one corner of a pentagon , or hexagon surrounding the core. This is also visible in the photos posted and linked to above.
Also with large aperture I can see some of the brighter stars as a pale orange color.

Hmmm... I'll look next chance! Never scrutinized with that darker propeller in mind, but certainly noticed real patterns of stars that look like tendrils. And always wondering to what extent it could be some sort of dynamic associations and/or our natural tendency to see patterns in chaos. I've got 16-in binos and even bino Night Vision capability eyeps. That enhances dark nebulae magnificently. So excited to look for the propeller. Intend to report back. Tom

Here's my BRT image of M13 showing the Propeller or Mercedes-Benz symbol on the left and the X of brighter stars near the cluster's core.  North is up in the image. 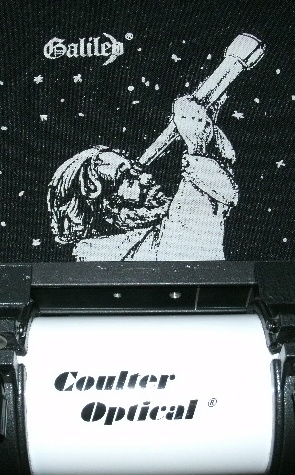 I don't see nothing but a ball of stars with my 10". If they only show up in photos don't you think they are photo enhancement artifacts?

I'm not sure how much aperture is needed but I've seen the propeller numerous times in my 18". The propeller isn't a photo enhancement artifact. 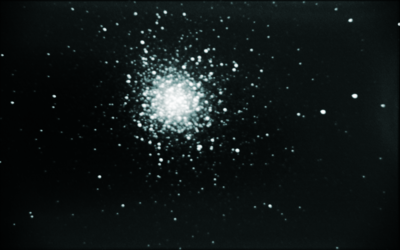 WOW never knew I captured the propeller! Thanks Phil. 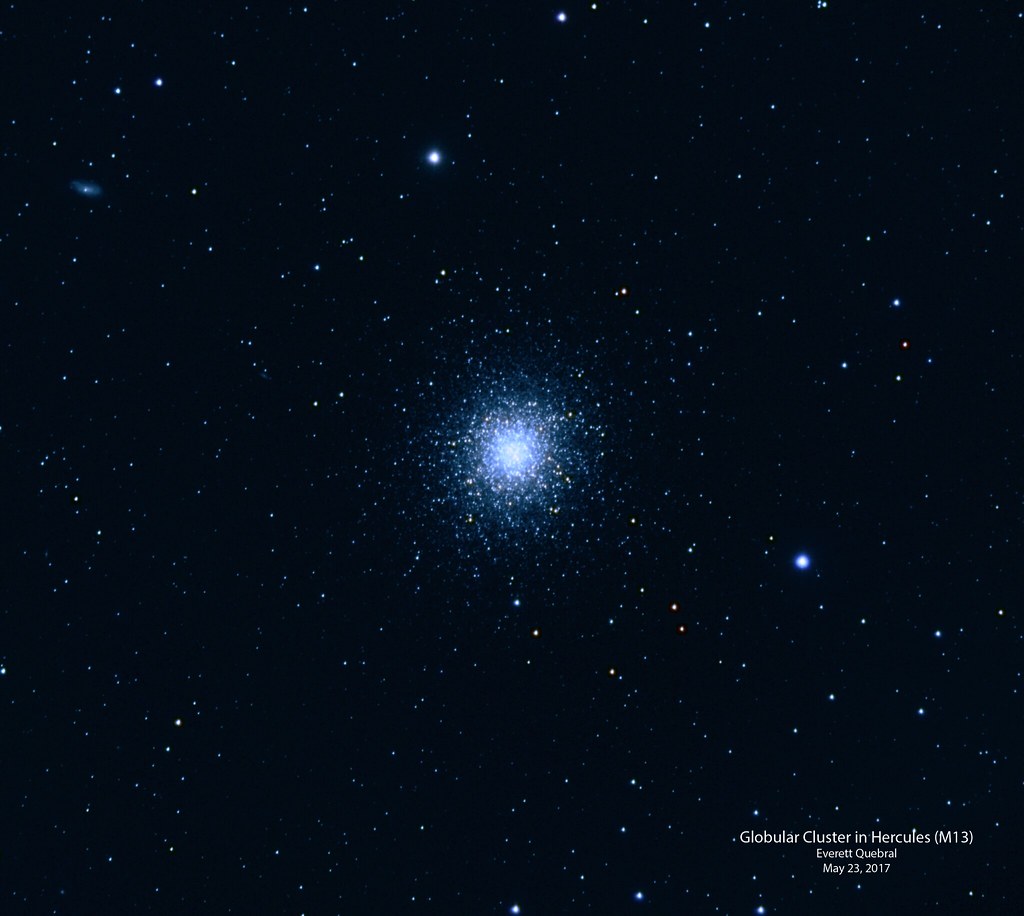 An incredibly clear image of the propeller

Phil, great, fun article.  Thanks for sharing it with us.

Great image of not just the Propeller, but also the lower portion of that "hexagon" structure The Ardent references in a post above.  The Prop in your image forms the lower left "corner" of the hexagonal structure.  Awesome capture.

It show up well in this image I took with a 6" f/5 Newtonian:

OK, here I am, two weeks later; Yippee! Had been quite some time since I used the JMI RB-16 binos. To my surprise, everything worked fine. I warmed up on a few galaxies, nebulae, and then globulars M10, 12, 14. Delighted with great sky darkness and seeing, M13 high, SQM 21.3 in the direction of M13. I savored the globular at 96 and 141x. Both showed the propeller nicely... the lower mag seeming more distinct, but the higher mag confirming that there were "no stars" in the propeller. Then I went to the Night Vision eyepieces. Woo Hoo! The propeller is much more apparent, Much more! Still trying to understand ~why~ that would/should be so, but the affect is really significant. Here are some possibilities: NV is blue-deficient, but sees well into the NIR. NV picks up about a magnitude in threshold. NV displays brightly, so can look directly using central, photopic vision. True binos significantly improve contrast discrimination. So, this admittedly grandiose set-up is highly-optimized for the challenge. Had this been an experiment ~in the blind~ "Here's a globular, sketch what you see." I think I would not have seen the propeller as such with the regular eyepieces... I'm pretty sure I would have sketched it as a Y-shaped dearth with the NV. Further: Although the NV frequently shows structure to advantage... it is not as satisfying as examining the stellar photons directly to the retina.  Conclusion: Thanx for the challenge. Now my equipment and attitude are ready for more observing! Tom

What are night vision eyepieces?  Who makes them?

Tom here, It's actually Gen 3 Night Vision adapted to a nice, simple 1.25-inch tube. Even takes 1.25 filters! So, you have to go that route. The BEAUTY is that feels Exactly like using a regular eyepiece, cept you "turn it on." Here's a picture. I can provide more info. I have three identical ones, two that I most use and one "backup." Cost is less than $2000 each... YIKES!  Picture attached shows it next to a TeleVue 10mm Delos.  Tom  Ummm... I have NO IDEA how to attach my image to this perplexing "user friendly" comment... Nuts. Anyway, it weight about as much as a Delos and is SPECTACULAR in use!  Tom  PS if anyone can tell me how to attach an image to a comment, please let me know. This CN is way too fancy, to the point of losing me.  Tom

I saw it a few nights ago with my 12 inch dob!  I never even knew to look for it.  Thanks Phil!

I had an interesting view of M13 and NGC 6207 through a 20" Obsession Dob and a 20mm Lunt 100 degree eyepiece at Stellafane last Thursday night.  Both were visible simultaneously.

BTW, the Propeller has been sighted in some surprisingly small apertures and at magnifications lower than I'd previously believed possible.