Aim your telescope anywhere in the large, seemingly empty gap between the stars Denebola [Beta (β) Leonis] and Vindemiatrix [Epsilon (ε) Virginis] and, given sharp eyes and a dark sky, you are bound to see one or more faint splotches of light somewhere in the eyepiece's field of view.  You've entered the Coma-Virgo Realm of Galaxies, a collection of upwards of 2,000 separate galactic systems.  Talk about a population explosion!

While there are many possibilities from which to choose, let's concentrate on a centralized line of galaxies known as Markarian's Chain. The name comes from the Russian astrophysicist Benjamin Markarian (1913-1985), who published an article entitled "Physical Chain of Galaxies in Virgo and its Dynamic Instability" in the December 1961 issue of The Astronomical Journal. In the article, he discussed how this 1½° arc of galaxies could not have just formed serendipitously. Instead, he "arrived at the conclusion that the chain of galaxies in the Virgo cluster is not a chance grouping but a real physical system."

Markarian's original chain had eight galactic links, but by veering off course a little to include some immediate neighbors, the list quickly grows to more than a dozen. How many of those listed in the table below can you spot?

Two galaxies, M84 and M86, dominate the western end of the chain and make a good jumping-off point. M84, an E1 elliptical galaxy, shows a slightly oval disk that's elongated northwest/southeast and punctuated by a brighter central core. Its neighbor, M86, also looks to be an elliptical galaxy, as well, although its larger, slightly dimmer disk seems more elongated. It was that appearance that led astronomers to classify it initially as an E3 elliptical. Modern studies, however, now identify it as an S0 or lenticular galaxy, the "missing link" between ellipticals and spirals in the Hubble galaxy morphological classification system.

Do you ever get the feeling that you're being watched? You might when you're viewing M84 and M86, if your skies are dark enough. A pair of faint galaxies to their south joins the two Messier objects to create sort of an intergalactic face. The tiny elliptical galaxy, NGC 4387, marks the nose, while the edge-on spiral NGC 4388 forms the thin mouth. Neither galaxy shines brighter than 11th magnitude, however, so spotting the face can be tough. Finally, the 12th-magnitude edge-on spiral NGC 4402, looks like a raised eyebrow to the north of M86, as if our face is wondering "hey, what are you looking at?"

Although M84 and M86 are the eyes of our intergalactic face, the next two links in Markarian's Chain, NGCs 4435 and 4438, actually bear the nickname The Eyes. This soubriquet goes back more than half a century, to an article called "Adventuring in the Virgo Cloud" that appeared in the February 1955 issue of Sky & Telescope magazine. The article was accompanied by a chart created by its author, Leland Copeland, that affixed whimsical labels to some of the galactic groupings. To Copeland, NGC 4435 and 4438 looked a pair of eyes staring back at him.

NGCs 4435 and 4438 are also collectively known as Arp 120 for their listing in American astronomer Halton Arp's Atlas of Peculiar Galaxies. The catalog's 338 entries comprise a fascinating collection of interacting and merging galaxies. In the case of entry 120, Arp believed that both galaxies were close enough to distort one another because their complex gravitational interplay. Streamers of hot material extending away from NGC 4438 add evidence to a much more recent study using the Chandra X-ray Observatory that concluded both galaxies had collided with each other about 100 million years ago.

NGC 4435, the northern "eye," impresses me as slightly brighter than NGC 4438, even though it is listed as half a magnitude dimmer. That disparity is likely because of its smaller size, which concentrates its light more effectively. Both appear oval, with their long axes oriented due north/south.

Hopping another link along the chain to the east-northeast brings NGC 4458 and NGC 4461 into view. The former looks nearly circular, while the latter displays a distinctly elongated disk that will probably require averted vision to be appreciated fully.

The chain crosses into Coma Berenices before arriving at NGC 4473. Even if you have had some difficulty spotting some of the other galaxies here through your telescope or large binoculars, NGC 4473 should come clean fairly easily. Its elliptical disk, oriented approximately east/west, surrounds a stellar core that should be evident at about 80x.

Finally, we arrive at NGC 4477, the last link in Markarian's Chain. Like NGC 4473, this should be a fairly easy catch through 3- to 5-inch telescopes. Look for a small, foggy patch engulfing a brighter central core. Lying right next door, NGC 4479 offers an even more difficult test than its neighbor. Though not part of Markarian's original list, this 12th-magnitude galaxy offers up a worthy challenge for small-scope observers. Crank up the magnification to 100x or more, if conditions permit, to maximize image contrast.

I had a great view of Markarian's Chain years ago at Cherry Springs State Park through a large Dob at relatively low magnification.  There were galaxies aplenty.

I will never forget, almost 20 years ago, scanning the galaxy region between Leo and Virgo with a Discover 12.5" Dob (having seen a reference to area in Dickerson's Sky Watch) and was amazed as one galaxy after another wandered through the wide angle eyepiece (a 40mm I believe.)
Now I have my hands on a new-to-me C8 with Hyperstar, and a ZW0 ASI2600MC Pro CMOS cooled camera.  This is going to be my first target with that setup!  I verified the image region and image scale with Stellarium.
What a great time to be an astronomer!

Had a great view of this from Flagstaff, AZ a few nights ago. More galaxies popped out in that region than I've been able to see before!

is this a visual thing or are you asking for sketches and pictures ?

is this a visual thing or are you asking for sketches and pictures ?

Whatever you feel like posting, if anything, is great.

Saturday night I bagged the three brightest, along with 17 other new-for-me galaxies in Leo and Virgo, using Turn Left at Orion as my guide.   Looking forward to completing Markarian's Chain tonight!

Here is my shot at the chain this year. I took this with my 80mm Astro-tech refractor and a Nikon DSLR. Be sure to click on the picture to see the larger version.

This is by far one of my favorite regions.

That's a fine image of the chain, astrodrew22.

I first came across these in 2018 in Stellarium, listed simply as "The Eyes"; I then I saw them through my C5/750. By 2019 I was on a mission to capture galaxy clusters, and the Virgo cluster was high on my list. I went after it with my Nifty Fifty: 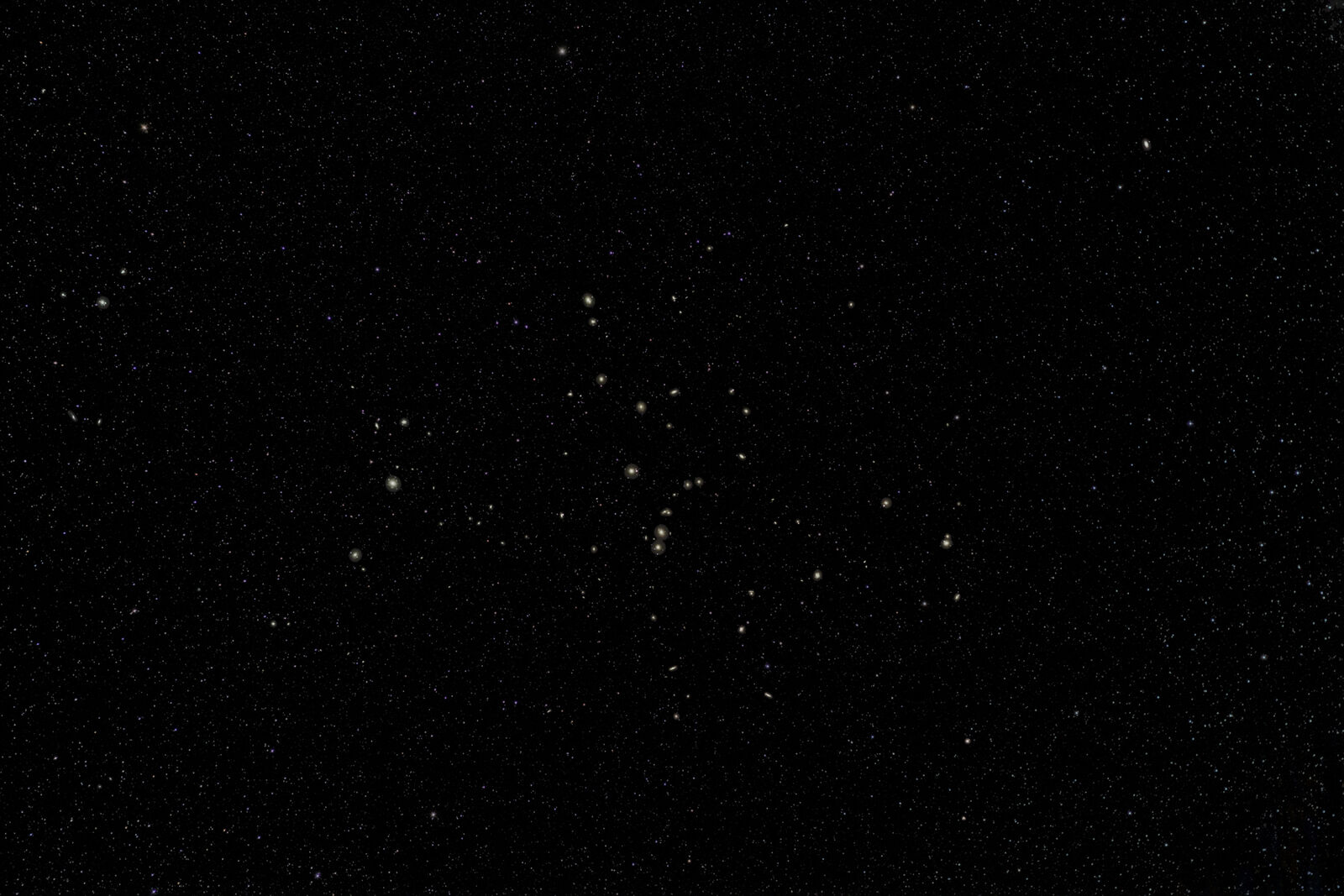 Only after learning a lot of Photoshop Kung Fu for processing galaxies did I stumble across the chain defined (probably after I upgraded Stellarium): 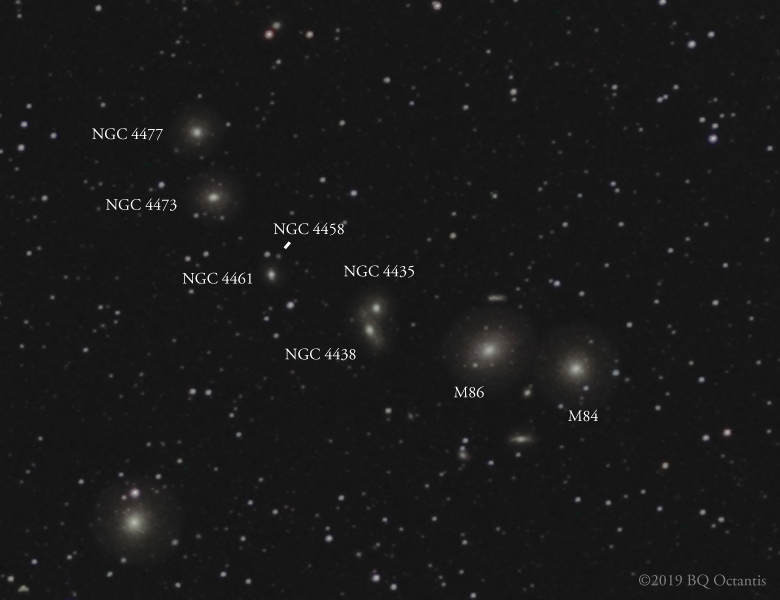 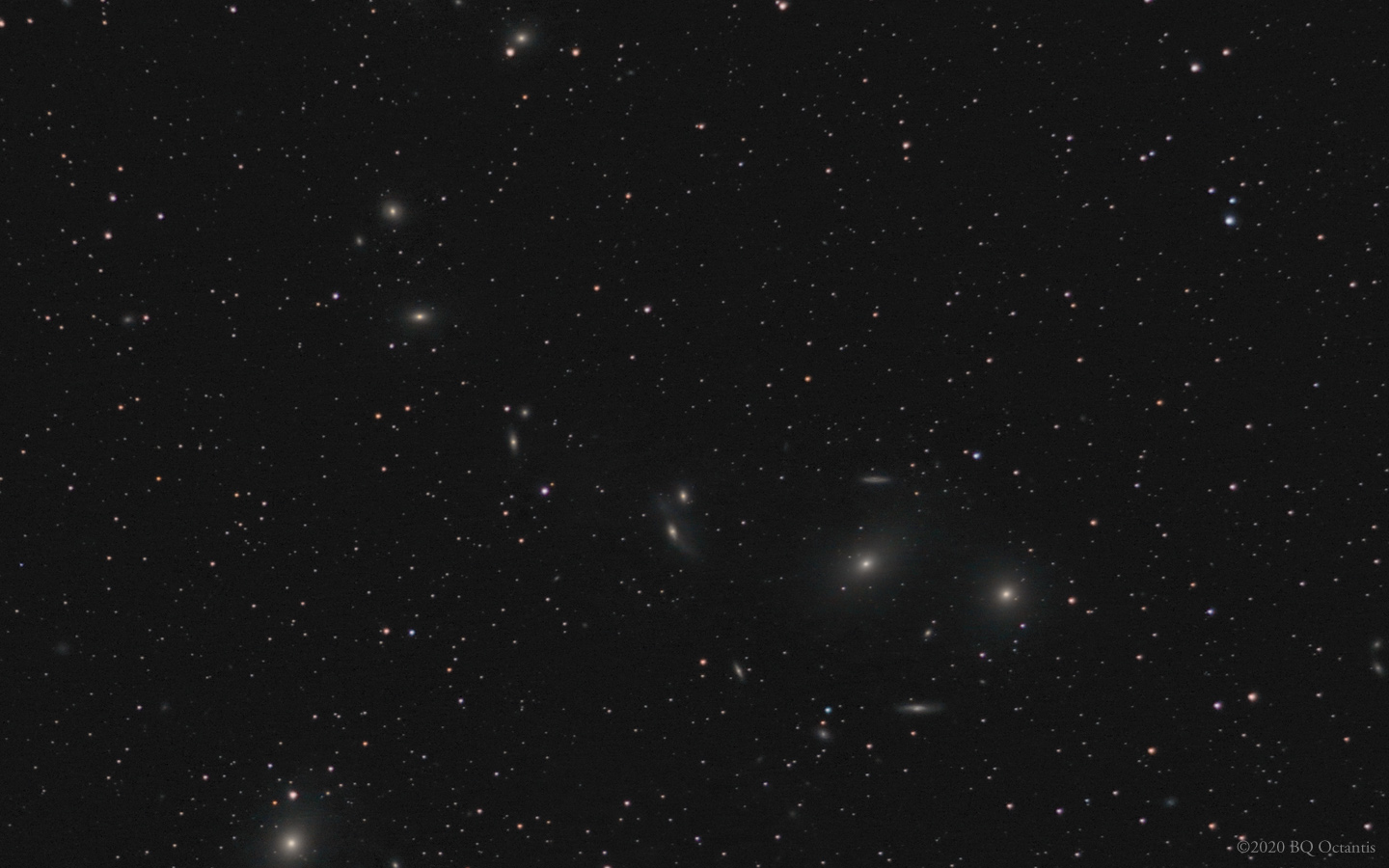 I've learned a ton about star processing since then; at some point I should go back and do another pass at processing…

Using the Slooh Canary Islands Rasa, I processed about 12 subs with excellent framing through a PixInsight flow. It didn't take many frames to start getting some good detail to show up:

Gear detail is in the link there, but on the f2.2 RASA they use a Celestron Nightscape 8300 Single-Shot-Color camera with a Kodak KAF-8300C chip. That was a pretty clear night, so was happy to have caught a well framed time on the scopes as they point every which way.

I poked around in area of Markarian's Chain last night from a fairly dark site using my 10" f/4.7 Sky-Watcher Collapsible Dob and a 13mm Tele Vue Ethos (93x).

I poked around in area of Markarian's Chain last night from a fairly dark site using my 10" f/4.7 Sky-Watcher Collapsible Dob and a 13mm Tele Vue Ethos (93x).

How many was visible Dave ?

I photographed this target this Month with 120 mm sw pro Ed at f 7.5

at bortle3-4 sky.this is my result. 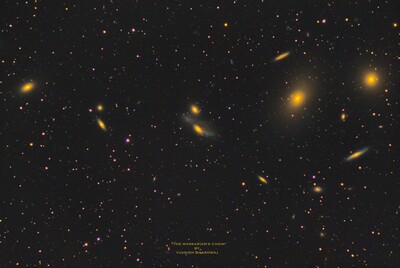 Thanks for such a wonderful article. I have had my eyes on these beautiful objects in the chain. It was amazing what 120 BT’s can pick up. While I did not get everything in the chain, I saw at least eight galaxies. I just love this object. For now, Markarian’s Chain is one of the first targets I observe. I will go back and then get a report of what I did see.

It's amazing how a small curved line of galaxies can be so powerful, beautiful, & eloquent. Thank you for the great challenge this month. 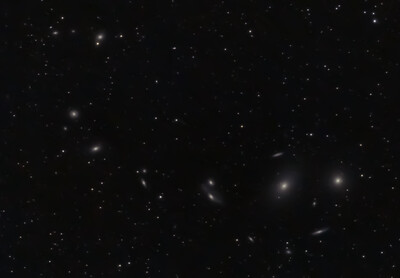 I spent a whole night a few years ago with an 11” SCT hopping through this patch of sky.  This year I made a couple of efforts to photograph it.  This was my best effort before the rains came.  I’ll be sure to go back to it next year as well.

Here's an image I grabbed last year, unfortunately before I had a system capable of dithering (hence the walking noise) 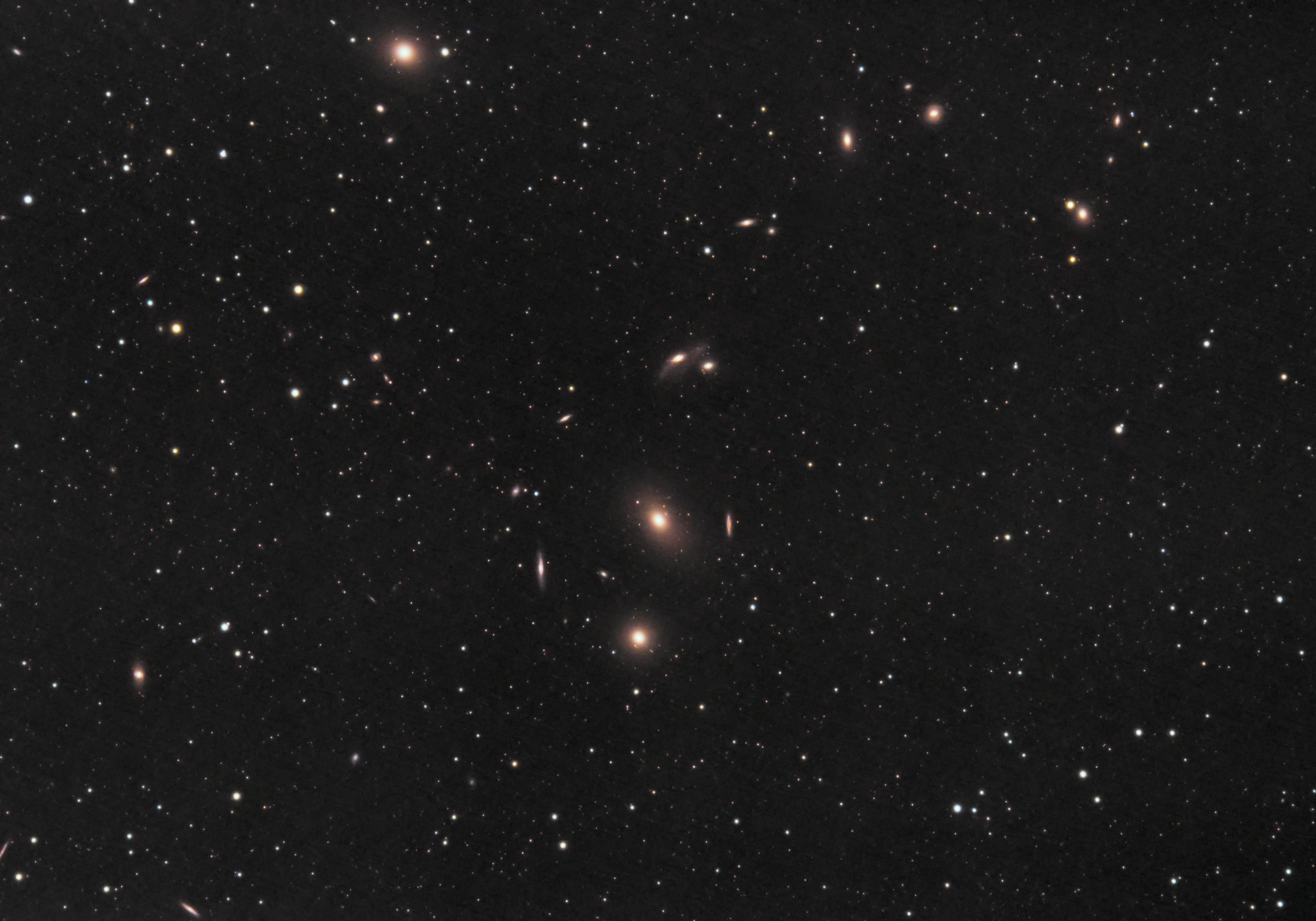 Phil is the world's Super Amateur! "From Dundee , IC 3355 is not observable, since you live so far north that the summer sky is too bright for it to be visible at any time..."

At my first dark(-ish) sky opportunity, I've jumped into the Realm. M84, M86 and Markarian's chain – though not nearly as obvious as in the beautiful pictures above – were still a beautiful sight in my C6. Thanks Phil!