Fifty years ago this month, on July 30, 1971, Commander David Scott and Pilot James Irwin navigated their Apollo 15 lunar module, nicknamed Falcon, to land among the lunar Apennine mountains, while Alfred Worden remained in orbit aboard the command module, Endeavor. Scott and Irwin guided Falcon to a soft landing between the edge of a deep precipice and the base of a tall mountain to establish Hadley Base, as the landing site became known.

Apollo 15 was the most ambitious mission up to that point. The fourth crewed landing, it was the first of the so-called "J" series of missions. The J missions, which also included Apollos 16 and 17, were focused on more extensive scientific investigation of the Moon, both from on the lunar surface as well as from orbit. They were also designed to enable longer stays on the Moon, as well as use a second generation Lunar Module modified to carry along the Lunar Roving Vehicle (LRV). The LRV allowed astronauts Scott and Irwin to travel as far as 3.1 miles (5.0 km) from their Lunar Module. In the 18.5 hours spent outside the Lunar Module, they drove a total of 17.25 miles (27.8 km).

Landing sites for the final three Apollo missions were chosen because of their scientific interest, In the case of Apollo 15's site, geologists had long been curious about the origin of the Moon's rimae, Latin for rilles. Some believed the Moon's sinuous rilles were caused by flowing fluid, probably lava, back when the Moon was still volcanically active some 3.5 billion years ago. To further that research, Apollo 15 returned 170 pounds (77 kg) of lunar soil and rocks. Based on that research and continuing study, sinuous rilles like Hadley are likely the result of ancient lava flows or collapsed lava tubes.  Schröter's Valley in Oceanus Procellarum is the largest sinuous rille on the Moon.

The remains of Hadley Base may be invisible through our telescopes, but its spectacular surroundings are a must-see stop on any tour of the Moon.

To get there, follow the curve of the Apennines toward their northern end, where, to the east, lies a flat area known as Pales Putredinis, the Swamp of Decay. Just west of the Swamp, in the lunar highlands, is the prominent peak Mons Hadley. Hadley rises an impressive 14,500 feet above its surroundings, about half the height of Mount Everest, the tallest mountain on Earth.

Look carefully just to the east-southeast of Mons Hadley for a thin, sinuous channel that snakes through the adjacent flat plane. That's Hadley Rille, or more accurately, Rima Hadley. Rima Hadley meanders for 48 miles (77 km), severed almost perfectly in the middle by the 4-mile-diameter (6.4 km) crater Hadley C. The rille, cut by flowing lava 3.8 billion years ago, is 2 miles (3.2 km) wide at its broadest and drops 1/4 mile (0.4 km) to its floor below.

The best time to visit the area of Hadley Base is at First Quarter, when the Sun has broken over the mountains and poured into the flat surrounding plain. This month, that occurs on July 17.  With steady seeing conditions, magnifications more than 300x add a three-dimensional beauty to the scene, with the towering mountain rising dramatically above the steep gorge. From the looks of it, lava flowed from broad gash in the hills at the southern end of the rille and migrated northward, making several sharp turns along the way, before emptying into the mare. Apollo 15 landed just north of the rille's northernmost crook, where it veers suddenly to the west.

Alternatively, Last Quarter, as the Sun sets over Hadley Base, is also prime viewing time for this area. That will be on July 31, one day after the 50th anniversary of the mission's landing.

I can just about remember the Apollo 15 mission. I would have been Seven yrs young then and if I can remember correctly the BBC showed the launch of Apollo 15 in the late afternoon (UK time)

This area is rich in geological features and it is often a challenge for Astro-imagers to see whether or not there skill is good enough, not to mention the collimation of the telescope (Newtonian or SCT) is good enough, to show the Hadley rille. If we ever get see an end to these endless cloudy skies. I will see whether I can see this area visually, through one of my refractors or my C9.25.

More amateurish fun with Phil.  Thanks Phil Harrington.  Where would I be without the worlds greatest amateur?

Well first I want to thank Phil for all the time and effort he spends informing and educating others. I just today read his interesting article in Astronomy, July 2021 issue, about telescope mirror making.

I became interested in the moon, as I was taking a lot of images and realized that I didn't know what I was imaging or much about the moon itself. I am now reading "The Modern Moon" by Charles Wood, and learning a lot about lunar geology. The Classic Moon thread here on CN is also excellent.

Unfortunately I can't enter the July Challenge because it's too hot (and cloudy) here to go outside. But I wanted to share a couple of my previous moon images. One is the Copernicus-Eratosthenes crater area which is close to Hadley Rille. The image includes Wallace crater (center top) that is also in your image (upper far right) above. The second is a crop of a wider view that shows the target area. Thanks! 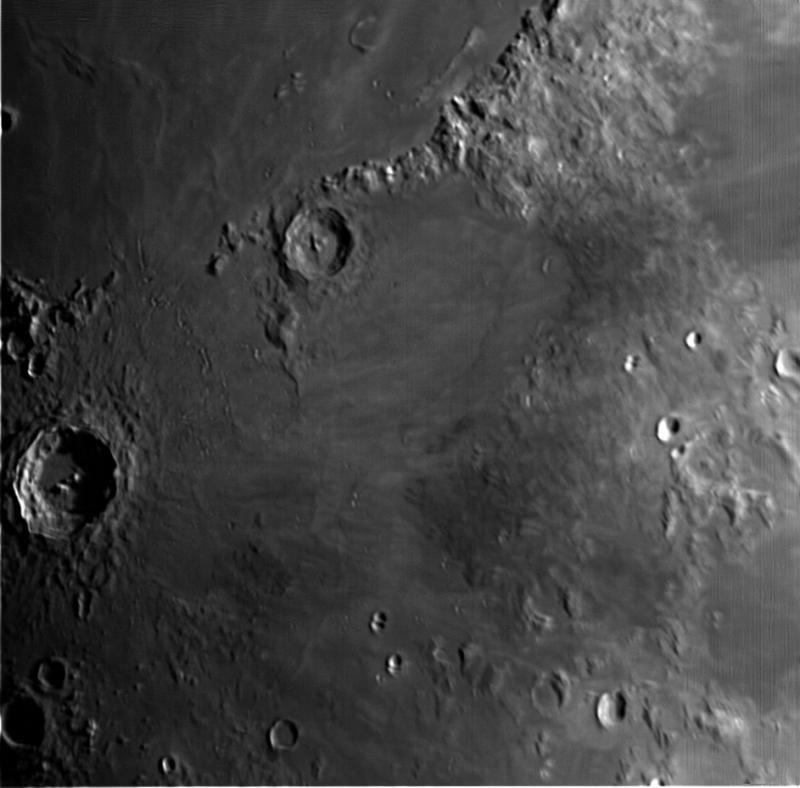 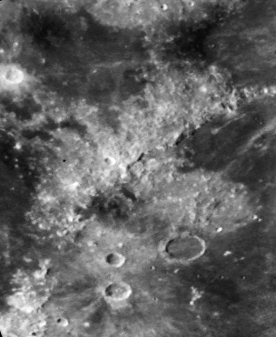 I took a look at this area last night with my Stowaway.  I was testing a new alt/az mount and seeing was only fair, so I kept the magnification to 153x (Nagler 3-6mm zoon at 4mm), but still the area was magnificent.  I did not see the rill, but made out Hadley C pretty easily.  Numerous other features in the area were also a treat to look at.  For a while, it made me forget that I was looking through an atmosphere filled with smoke and water vapor.

Thanks for this month's challenge.  Next 1st quarter, I'll take out my 160mm APO and GEM and take a look at higher magnification if the seeing allows.

The large crater Archimedes is 50 miles in diameter.

The highest peak in the Apennines mountain range is Mons Huygens at 18,000 feet. 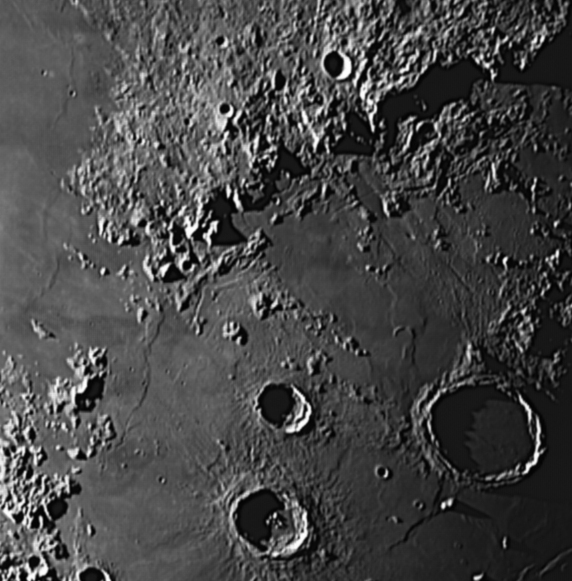 Great article...and here is my attempt, before I go into details let me explain I am very new to this: I took my first moon photo with an Olympus MFT (300 mm lens) handheld for the full moon in April this year, disappointed I then tried the following day on a tripod. I thought I saw a wrinkly crater edge and was immediately hooked! I then spent every night I could repeating each phase...eventually deciding on a C90 MAK as 'a lens' upgrade rather than the expensive Olympus 400 mm, finding out about all the software etc and eventually moving onto a ASI120MC. The image below is from a much larger a mosaic of half moon size from 11 stacked frames (very small 6 mm sensor) which were shot at 60 fps with a fixed photo tripod. Second image is over Mare Imbrium with a x2 barlow. Both taken 18 July. Can just(?) see Hadley Rille but I am pleased with it-had I taken a 'nice' full moon photo in April and NOT seen any craters I would not be into my new hobby.