M46 in Puppis is one of my favorite open clusters and a striking sight through just about any telescope. More than 500 stars are crammed into an area just a Moon's diameter across, creating one of the most jam-packed throngs in the winter sky.

M46 was discovered by Charles Messier on February 19, 1771, only three days after he had published the first edition of his catalog covering M's 1 through 45. Of his new catch, Messier wrote "A cluster of very small stars, between the head of the Great Dog and the two hind feet of the Unicorn; one cannot see these stars but with a good refractor." But when William Herschel gazed upon M46 through his 18.7-inch reflector on March 19, 1786, he saw something else, something Messier apparently had missed or overlooked, floating among the cluster stars north of the group's center. He probably thought to himself, "That's not a star at all. That's a tiny disk of light." Herschel included his find as H-IV-39, the 39th planetary nebula in his catalog, but today, we know it best as NGC 2438.

While NGC 2438 may look like it belongs to M46, in reality it is much closer to Earth.  The most recent study of the distance to NGC 2438 came last year.  In a paper entitled Searching for central stars of planetary nebulae in Gaia DR2 [Astronomy & Astrophysics. 616], authors N. Chornay and N. A. Walton examined the Gaia spacecraft’s Data Release 2.  Gaia is the European Space Agency’s astrometric spacecraft designed to accurately measure positions, distances and motions of stars with unparalleled accuracy.  Their study pegged the distance to NGC 2438 at 1,376 light years.

Earlier studies that led to same conclusion of different distances compared the spectra of the planetary with those of stars in M46.  These showed that both M46 and NGC 2438 were moving away from the solar system, but at two different speeds.  Were the planetary and cluster physically associated, they would be moving through space at the same speed.

M46 and NGC 2438 are easiest to find by dropping 5° due south from 4th-magnitude Alpha (α) Monocerotis, the brightest star in Monoceros.  Trying to find that star is its own challenge, especially with less-than-perfect sky conditions.  Fortunately, a line extended from Sirius [Alpha (α) Canis Majoris] through Gamma (γ) Canis Majoris for 11° to the east points right at Alpha Mon.  Use your binoculars or finderscope to trace the line, and then shift southward to find M46 within a slender stellar triangle.

Incidentally, you will also find another open cluster, M47, at the triangle's western tip, just 1½° west of M46.  Both clusters make a spectacular couple in binoculars and rich-field telescopes. Again, however, they are nowhere near each other in space. M47 is 1,624 light years away.

As striking as that low-power view is, NGC 2438 will take at least 150x to tell it apart from just another cluster star. Focus your attention on the stars in the northern part of the cluster, keeping an eye out for a tiny, softly glowing disk of greenish light. That will be the 11th-magnitude planetary.  Through my 8-inch (20cm) reflector at 203x and with an oxygen-III filter in place, the nebula's ring shape is clearly evident and appears very slightly oval.  Removing the filter and using averted vision adds a 13th-magnitude star within the ring, just slightly offset to the northwest of center.  Don't be fooled into thinking that you are seeing the nebula's forbearer, however.  NGC 2438's actual central star barely cracks 18th magnitude.  The dim sun we are seeing is most likely a distant member of M46.  Another of M46's stars, an 11th-magnitude point, appears to just brush the nebula's southeastern edge.

I always come back to this one. It looks great in either my 18" Dob, or 80mm triplet.

This was my first planetary when I saw it a number of years back. A beautiful sight!

Thanks Phil for a nice article. NGC2438 was really shining in 100mm ED already at 36x with UHC filter. I could see at 75x and 100x in the same telescope (without the filter) the hints of ring structure.

We had an unexpected clear-ish night last night so I thought I would roll out an old 17.5" Starhopper (converted to truss) that has been feeling neglected. . . anyway, a short hop from Sirius put me on M46.  I have a lot of LP and rarely see the Milky Way from my house and last night was no different.  I know the added aperture isn't really all that helpful but it's fun to push the big scope around.  I was only seeing stars to mag12.5.  The nebula was very dificult to pick up but after about 20 minutes I was able to see it with averted vision.  Just a ghost of a disk.  Putting on an OIII filter made the ball of light jump right out at 53x.  Slightly dimmer to center.

I think M46/NGC 2438 is high upon everyone's list of favorites. It's got those tiny pinpoint stars along with the beautiful planetary.

It presents many views and sides, depending on the sky and the telescope.  From my urban San Diego backyard, just seeing the star field in an 80 or 100 mm requires magnification.,  in a 10 inch, it comes alive though the nebula will be difficult without a filter.

Under dark skies, it's beautiful in hand held binoculars as a cloudy companion to M47. In larger reflectors it's no longer those subtle star fields, it's almost too bright and NGC 2438 is a jewel with an embedded star or two.

This 50-second-long exposure of M46 and M47 was captured from the Bradford Robotic Telescope facility on Tenerife in the Canary Islands using a 200mm Nikon lens and a FLI MaxCam CM2-1 fitted with a E2V CCD47-10 (1k x 1k pixels, each 13um square).  This was the best I could do in processing the rather disappointing raw image.  Faint M46 lies to the left of center and the brighter but sparser M47 is to the upper right.

This last week, I was out at our place in the high desert and spent a fair amount of time with an Astro-Tech 50mm RACI finder that's repurposed into a RFT.   It give very nice low power views and the optics are quite good, Castor at 5" is an easy split, Porrima at 3" is about the limit.

The views of M46 and M47 at low powers (10x, 5.5 degrees TFoV) were binocular like and quite pleasing.  I spent some time trying to eek out NGC2438 using both UHC and O-III filters and a variety of eyepieces but with no luck.

I have imaged M46 and NGC 2438 many, many times. I have also diligently hunted down 2 of the three "other" planetary nebula in that area. I have seen and imaged the Calabash or Rotten Egg nebula a few times.

Interestingly, NGC 2818 is the only cluster-planetary combination that is currently believed to be truly associated.

I am gonna try for NGC 2818 this evening. I have the perfect spot in which to view it, however, it is only 6 degrees above my horizon, so timing is critical. It transits my location at 10:44 pm. If I can get a pic of it, I will post it either here or in another forum, most likely EAA forum.

After discussing M 46 At a meeting of the Kingston, Ontario RASC I thought I would have a look for this. Turns out I already had a pic of M 46 and when I looked at it there was the planetary Neb right where it should be. 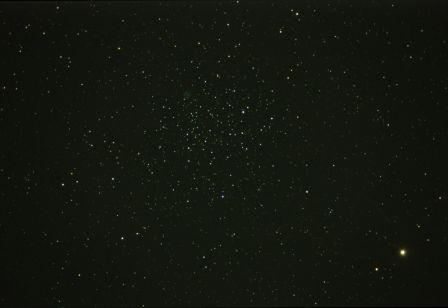 Well, last night I had an opportunity to capture NGC 2818. However, the seeing and transparency in my area was a crap shoot at best. I was looking through almost the densest part of the atmosphere where high level jet stream was playing funky music and the air turbulence was extreme. Still I managed to obtain a 30 second pic of NGC 2818 using a Nexstar 8 OTA and my ZEQ25 mount, ASI294MC camera using SharpCap 3.2 Pro. I imaged in mono despite using a color camera, because the intense glow from near the horizon was atrocious. This object was only 6 degrees above my horizon and I was overlooking a significant light dome too.

As it is, you can just make out the nebula and not much detail, also the star cluster is vaguely evident.

I attempted this viewing from my light polluted backyard. Exposure time was roughly 20 seconds on my Celestron 8se. I'm pretty pleased with the results being what they were in poor light conditions. 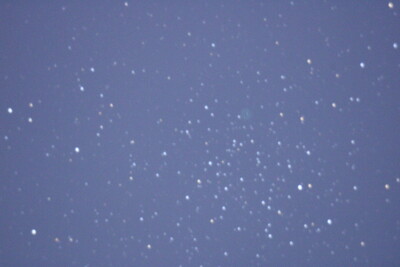