That's the distance to 3C 273, the sky's brightest quasi-stellar radio source, or quasar for short, and the first of its type to be detected when it was discovered in the late 1950s. The unusual designation indicates that it's the 273rd entry in the Third Cambridge Catalog of Radio Sources, which was compiled with the historic radio telescope at Jodrell Bank, England, first published in 1959. A few years later, after the optical component of 3C 273 was confirmed, Maarten Schmidt became the first to recognize that the relatively simple hydrogen line in the object's spectrum implied a redshift of 0.16, placing it at an unheard of distance. (To learn more about the fascinating early history of quasars, I recommend reading The Discovery of Quasars by K. I. Kellermann of the National Radio Astronomy Observatory in Charlottesville, VA.)

Like many other quasars, 3C 273 looks like just another dim, slightly bluish star. Looks can be deceiving. Given its tremendous distance, its total light output is an incredible 2 trillion times that of our Sun. Consider this. If it was located 30 light-years from Earth, roughly the distance to Arcturus, it would shine as bright as the Sun in the sky. What's even more amazing is that this enormous power source takes up a volume of space no larger than our solar system! But they are not just bright in terms of visible light. Quasars emit astonishing amounts of energy at all wavelengths across the electromagnetic spectrum.

Today, thanks in large part to the Hubble Space Telescope, astronomers have a better handle on the true nature of quasars. First, all quasars lie billions of light years away. That means when we look their way, we are looking back billions of years in time. This makes quasars great tools for learning what the early universe was like. Although they look like stars, astronomers know that they lie in the centers of young, very active galaxies that are still undergoing formation. 3C 273, for instance, is in the heart of a giant elliptical galaxy.

While quasars were plentiful in the early universe, they are nowhere to be found in closer galaxies. Instead, we see supermassive black holes and, in some cases, galaxies with active galactic nuclei (such as Seyfert galaxies, like M77). This leads astronomers to conclude that most galaxies, at least the more massive ones, may have gone through a "quasar phase" early in their formation. A quasar's power comes from super-supermassive black holes, with masses ranging up to tens of billions of solar masses, surrounded by accretion disks of gas and dust. As a quasar's host galaxy evolved, most of the available gas and dust outside of the quasar/black hole's event horizon slowly evolved into stars, calming the supermassive black hole's feeding frenzy.

The trick to seeing 273 through small telescopes is to wait for the best nights, when the air is dry and the sky is crystal clear. Even then, picking it out from all of the other, equally dim stars can be a challenge. To try your luck, aim your telescope toward the naked-eye star Eta (η) Virginis and then, with your lowest power, widest field eyepiece in place, nudge about 1½° northeastward to the reddish star SS Virginis, which itself fluctuates between magnitudes 6.0 and 9.6. From here, head about 1¼° due north to 7th-magnitude SAO 119392.  The quasar lies ¾° directly east of this last star, right next to a 13th-magnitude star that some could confuse for 273 itself.  The quasar's blue color, however, will help set it apart from any stellar neighbors, as should the "mini Cassiopeia" asterism shown on the chart.

Like many quasars, 3C 273 is known to vary in brightness. Although it usually shines at magnitude 12.8, it has brightened by as much as a full magnitude in the past. But it can also slip a little unexpectedly, slowly dimming to magnitude 13.2 or so before returning to normal brightness.

May 13 2022 07:08 AM
I’ve seen it only on an image I took with my 8” SCT and ASI178MC camera. It was definitely a bluish shade. Since I know Phil’s emphasis is on visual and not Astro, I will see if we get a clear enough sky to try it with my aged and not-so-good eyes. It should be a fun challenge! 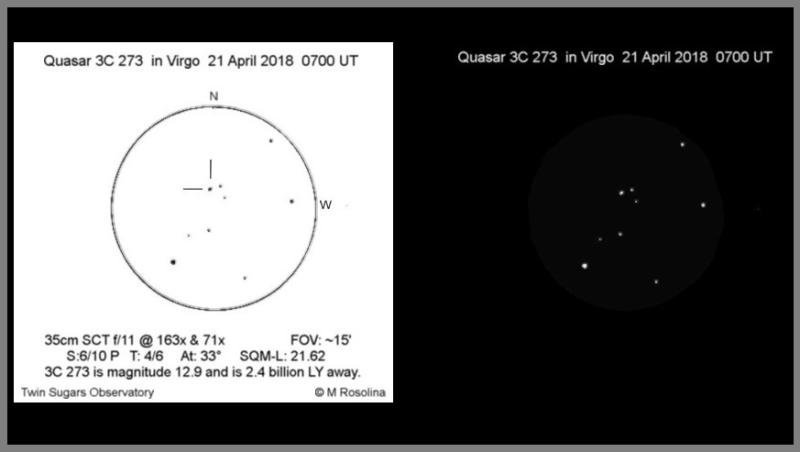 In 80mm, the quasar was more difficult. It was already visible at 96x. More clear view was at 150x, I could see again not only quasar but as well the two nearby stars. The quasar was a little bit more easy to see than the stars so it was probably slightly brighter. It required strong concentrated effort to see the quasar.

Thank you Phil for all the awesome stuff you do for astronomy..

Thanks, Herschel. That's kind of you to say!

A great observing challenge. I have even shared it with a friend.

It's probably the most distant thing any of us will see in a lifetime.