What is your favorite lunar feature? Maybe it's the mighty craters Copernicus or Tycho. Or could it be the historic Sea of Tranquility? Perhaps you enjoy visiting the rugged southern highlands around Clavius, or the Apennine and Alp Mountains.

If I had to come up with my favorite target, it would have to be a far more modest sight. I always enjoy looking for and at the Straight Wall. Best seen 8 days after New Moon, and again on Day 22, the Straight Wall is listed more properly under its official name Rupes Recta, or "Straight Fault." While fault lines on Earth are most often associated with plate tectonics, Rupes Recta was formed when a portion of Mare Nubium succumbed to subterranean pressures in the lunar crust and buckled. The area to the west of Rupes Recta sheared off and dropped some 1,000 feet (300 meters) along the fault line that extends for 70 miles from tip to tip. The table above lists the ideal dates for the next few months for viewing this spectacular lunar region.

Depending on when it is viewed, Rupes Recta will look like a sharp, dark line, or a bright scar in Mare Nubium. On the evening after First Quarter, we see the former appearance as the rising sunlight falling onto the surround mare has yet to caress the fault's westward facing surface. As the Sun climbs higher in Nubium's sky, the shadow grows shorter, causing Rupes Recta to blend into the background.

Wait two weeks and return on the night after Last Quarter, as sunset comes to the Sea of Clouds. As the Sun sinks lower in the sky, Mare Nubium darkens in the twilight, but the face of Rupes Recta remains fully sunlit to create a dramatic bright line near the terminator.

Whether viewed at sunrise or sunset, Rupes Recta appears to live up to its popular nickname, the Straight Wall. Looks to the contrary, however, shadow studies indicate that Rupes Recta is not shear cliff at all. Instead, its face rises at a relatively gentle incline between 10° and 15°. It would be a moderately steep hike in a spacesuit, but you could scale it without any of the customary mountaineering gear.

In his 1895 book The Moon: A Full Description and Map of its Principal Physical Features, Thomas Elger described the scene:

The Straight Wall, sometimes called "the railroad," is a remarkable and almost unique formation on the western side of (crater) Birt, extending for about 65 miles from northeast to southwest in a nearly straight line, terminating on the south at a very peculiar mountain group, the shape of which has been compared to a stag's horn, but which perhaps more closely resembles a sword-handle, the wall representing the blade.

Two years later, Elger published this two-part view of the scene that shows both sunrise and sunset from the region. The illustration accompanied an installment of a regular feature that he wrote for the Journal of the Liverpool Astronomical Society called The Moon Surveyed in Common Telescopes. This particular article, entitled The Straight Wall Near Thebit and the Neighbourhood, appeared in the March 1887 issue (vol 5, part 5).

The likeness to a sword and handle, more evident in his right, sunset rendition, is an example of a lunar clair-obscur shadow effect. Just south of Rupes Recta lies a small clump of jumbled terrain and a half-buried crater. The 17th-century astronomer Christiaan Huygens, credited with discovering Rupes Recta, likened the jumble and half-crater to the handle of a sword, with Rupes Recta forming the blade. Although a better allusion is that of a fencer's foil, we know the combined appearance today as Huygens's Sword. I wrote an article in the December 2018 issue of Astronomy magazine entitled Observe Shadow Effects on the Moon that discusses this and a dozen other lunar clair-obscur effects.

West of Rupes Recta is the perfectly round crater Birt, named for William Birt, a 19th-century British astronomer. Birt, spanning some 11 miles in diameter, is joined by a 4-mile diameter crater to its immediate east known as Birt A (although in my mind, I've nicknamed it "Ernie").

By cranking up the magnification to at least 200x, can you also make out a thread-thin rille that starts just west of Birt and curves to the northwest? That's Rima Birt, a difficult-to-see tectonic feature that runs roughly parallel to the Straight Wall. Rima Birt spans some 30 miles in length, but is perhaps not even a mile wide. If you look carefully, you may also notice that the rille's northern and southern termini appear slightly distended due to two small craters, Birt E and Birt F, respectively.

Good luck with this month's Cosmic Challenge! And be sure to post your results in this column's discussion forum.

I too enjoy looking at Rupes Recta aka the Straight Wall aka Huygen's Sword. The first quarter moon shows lots of features/craters due to the shadows (lots of contrast), these get washed out on the full moon. Also it helps that the first quarter moon rises early enough that it is high in the sky at a reasonable time (not too late at night).

Here's a pic from last weekend, using my AT 92. Single sooc jpg with an unsharp mask. 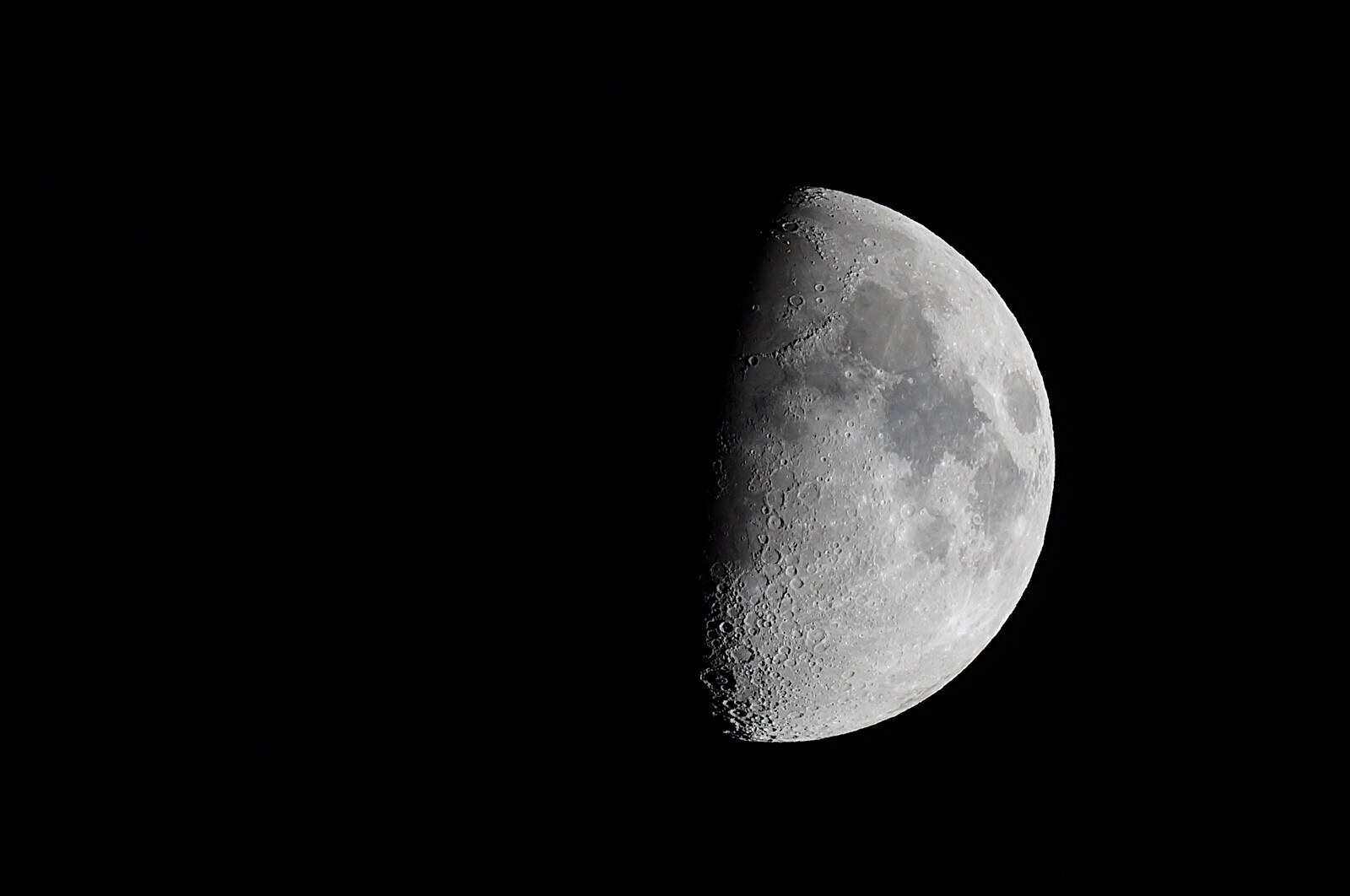 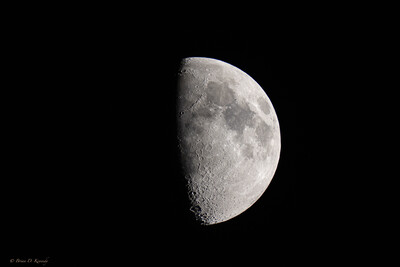 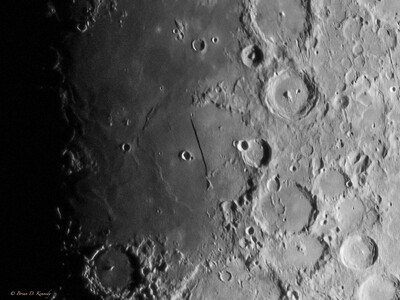 Thanks, Bill!  Not sure that Moon Watch is in my future (not a bad idea, tho), but I do discuss the Moon in some detail in Star Watch as well as my book Cosmic Challenge.

Well that's neat! Never heard of it! Will be attempting this one soon.

Rupes Recta is a great target and a good choice for one of your articles.

It's not only a striking sight for imagers like Brian (nice shot there) but also attracts sketchers.  If you search the Sketching forum you'll find several fine sketches of the Straight Wall there.

I took this hand-held afocal iPhone photograph on Saturday night at the Naylor Observatory using my 6" f/10 Celestron NexStar Evolution SCT.  While the transparency was rather good, the seeing was not.  Lunar north is up in the image.

I just discovered this feature yesterday! I was out two nights ago shooting Lassell's Crater complex, and while processing yesterday, there it was in the scene: 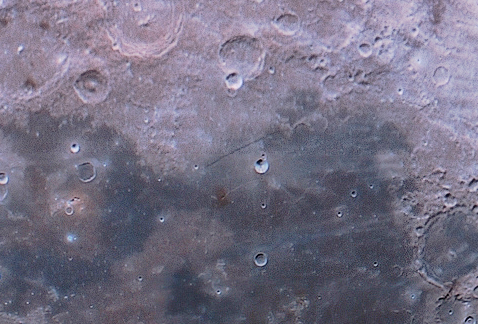 Rima Birt wasn't quite evident at first, but the dark patch at its end was quite visible even on the camera display—I thought it was a smudge until I noticed it moved with the scene.

Thanks for the lesson!

Jun 04 2020 03:43 AM
A few days ago, the 31 of May, I took a full disc picture of the Moon with my 6 inch f4 newtonian, I collected IR-RGB to make a color picture. Today I was reprocessing the IR channel alone while I notice this weird line. I was so curious about it that I even made a post: https://www.cloudyni...e-moon-surface/ So here's my humbly random contribution to the contest, the image is resampled 2x : 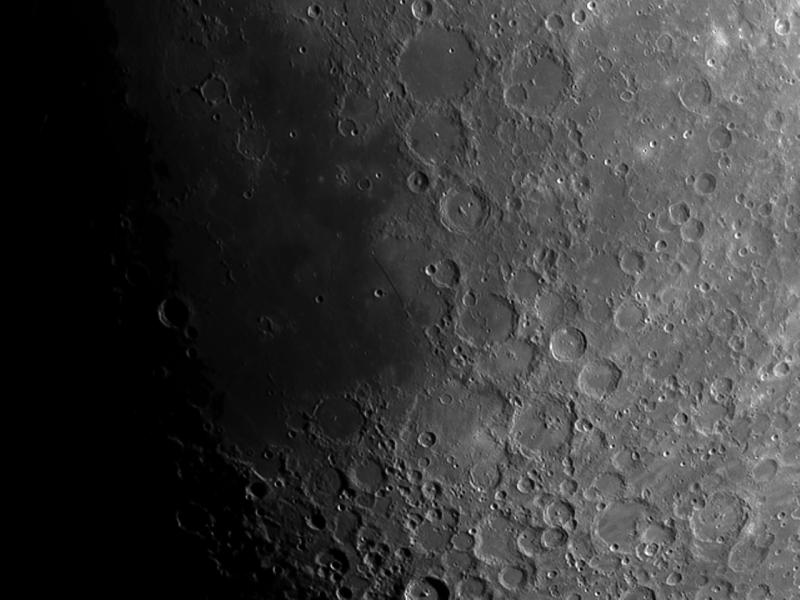 It does at that.

Here's my Rupes Recta that I took a couple weeks ago.  I imaged it with 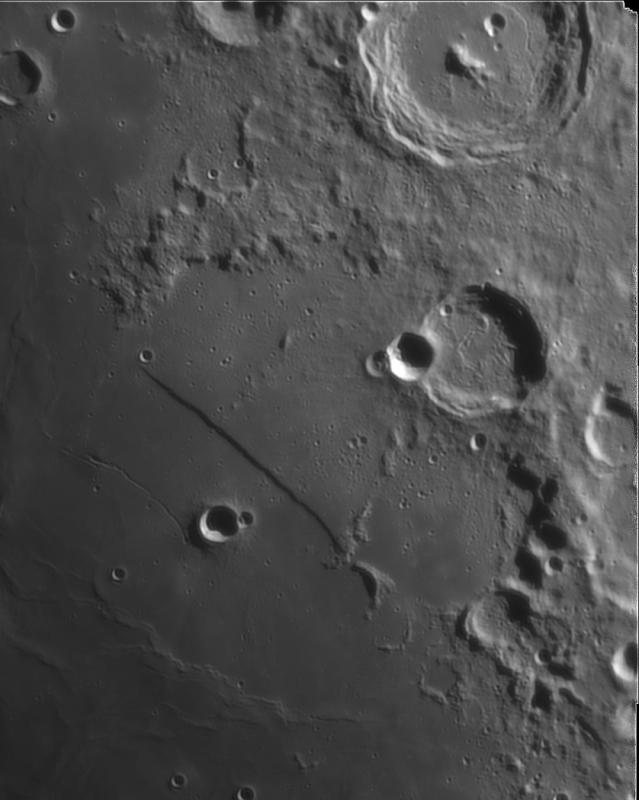 "i managed to image it with a high altitude moon"  LOL

I was sketching this region couple of months ago. This is what came from observation through 82mm refractor. Without prior knowledge (my ignorance of Moon is quite large), I was able to pick up Rima Birt and I noticed that it bisected a vulcano dome (and I noticed possible second smaller dome attached to it): After sunrise on the morning of June 12th at about 7 AM PDT, I was able to just glimpse the bright Straight Wall at 200x with a 10" Newt.  My attempt the morning of the 13th was foiled by clouds. I had hoped to see the wall more easily since I think the terminator will have progressed too far by the AM of the 14th to have the wall illuminated (per the simulation on NASA's SVS Dial-a-Moon).

I always try to view this feature around First Quarter.  Thanks to all who have posted excellent images of it.

I love this phase of our Moon. 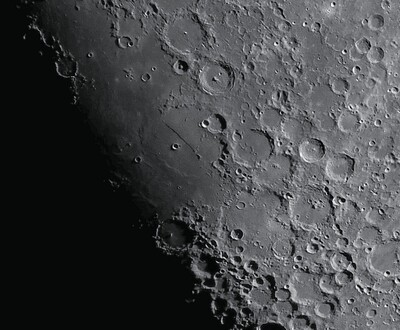 Amazing photo and a great object to view. Nice job on the photo and a good idea for a subject. I have seen this visually often and it always wows me. Being a newer older rediscovering astronomy love this sort of challenge.

Excellent article as usual Phil!  Thank you for continuing to motivate and challenge!

I was able to take a few afocal iPhone shots of Rupes Recta on Wednesday night before the sky became completely overcast using a 6" f/8 Orion SkyQuest XT6 Dob and an 8-24mm Tele Vue Click Stop zoom eyepiece.  Here's one of them.