markarian 
You may note that the images are a little larger this month.  Usually I size to 600 pixels in deference to those amateurs who use displays running at 800x600, but given the nature of these targets, for this month I've decided to try running the article sized for a screen running at 1024x768, with photos at 800 pixels wide.  If you don't like this format, please drop me a line and let me know.
Ah Spring, when a not-so-young man's mind (at least in my case) turns to thoughts of galaxies.  For many seasoned Deep Sky observers, there's no better time of the year.  As the snow melts, and we begin to emerge from our igloos, our bleary eyes drift towards the night sky.  Our telescopes now wander through Leo, Virgo and Coma Berenices gathering ancient photons from esoteric denizens of this celestial zoo.

If you're like me, you spend a great deal of time in that agglomeration of galaxies labeled the Coma-Virgo cluster.  The SEDS page for the Virgo cluster calls it the "the largest proven structure in our intergalactic neighborhood, and the most remote cosmic objects with a physical connection to our own small group of galaxies, the Local Group, including our Milky Way galaxy."

The Virgo cluster is the heart of our own local supercluster (confusingly enough labeled the Virgo Super-cluster).  By gravity, these giants are bound to us, or if you prefer we are bound to them.   Here then, lies our eventual destiny.

For an observer with a moderate to large telescope, targets abound.  And even a small scope can keep one busy for hours here.   I revisited the area this spring with a TeleVue 85, and quickly got lost.  Good charts are a must when you're headed into this area.  There are just so many galaxies.

Sitting astride the Virgo / Coma Berenices border, deep in the heart of the Coma-Virgo cluster of galaxies, we find one of springs finest showpieces; a bright galaxy grouping known as Markarian's Chain.   In December 1961, the Astronomical Journal published a paper by Beniamin Egishevich Markarian (1913 - 1985) entitled - "Physical Chain of Galaxies in the Virgo Cluster and Its Dynamic Instability".  In this three page paper, Markarian laid out a probabilistic analysis of the hypothesis that the bright galaxy chain starting in Virgo with the M84/M86 pairing, then curving up into Coma Berenices and concluding with NGC4477 was in fact not a simple chance alignment of galaxies, but an actual physical associated chain.    In essence, he used statistics to argue that "...the small probability of the chain being formed by chance speaks strongly in favor of the hypothesis that the chain is a physical system."

There's still debate about the physical association of the chain, but one thing nearly everyone can agree on is that it's a superb grouping for visual observers, and one of the clear highlights of the spring sky. 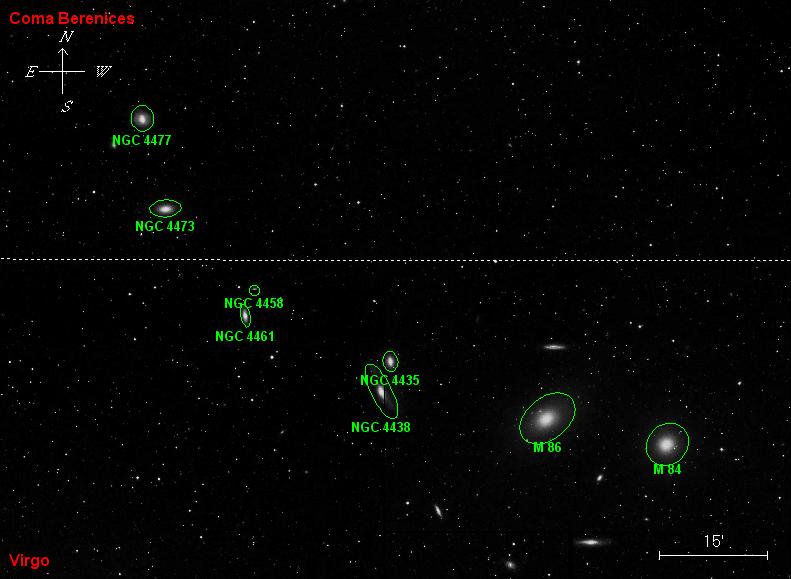 While Markarian laid out 8 galaxies for the interaction hypothesis (see the above image), there's some disagreement amongst amateurs as to exactly what galaxies should included in this grouping for our own purposes.  The most common additions propose adding NGC4459 and NGC4474 to end at M88, or even continuing on to M91 and NGC4571.  This makes sort of a galactic asterism (galasterism?) for deep sky observers.

One thing is for sure, there is no shortage of deep sky objects in the area.   Markarian's paper comments that the Shapely-Ames catalog puts 88 galaxies brighter than mag 13 in a region with a seven degree radius centered around this area, and there are some where around 1500 to 2000 galaxies in the Virgo cluster as a whole.  Jared Wilson notes he "...was able to find 38 different galaxies ranging in magnitude from 8.6 (M87) to approximately 16.4 (IC 3445)" in his spectacular image shown below. 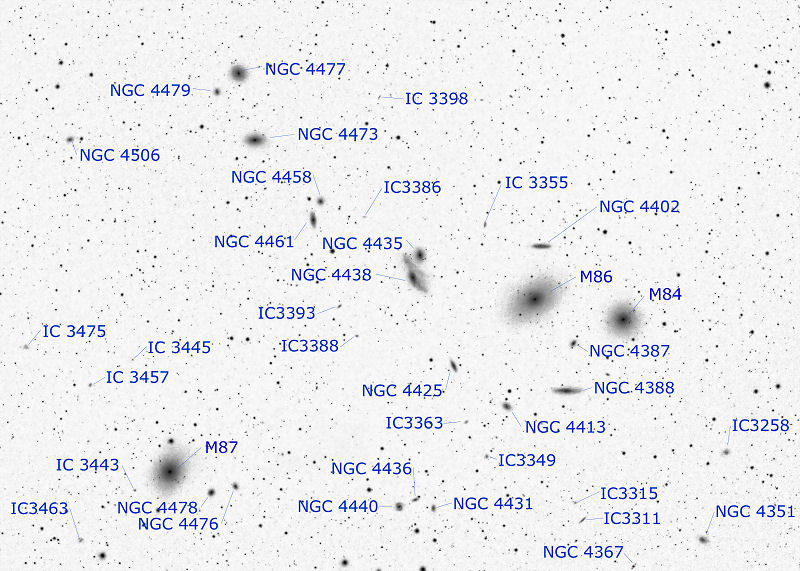 Personally, when I refer to the chain I pay homage to the individual who "discovered it" and typically stay with the classical grouping of 8 galaxies, and thus we'll define the limits of the subject for this article.

I've viewed the Chain (or parts of it anyway) in everything from 80mm apos up to 20" dobs, the components are all pretty high magnitude, and have decent surface brightness.  (A neat trick is to use a widefield scope and see if you can get the entire chain in the field at the same time and then see how many you can actually identify.) I've not attempted it with binoculars, but I suspect that if you were so inclined, you might have some good luck - at least with M84 and M86.  I'd suggest large aperture and high magnifications - at a minimum 10x50s - along with some good charts to help pick these guys out.  If you've managed part of the chain with binoculars, I'd really love to hear about it.

To find these, you're going to need a few pretty decent charts - 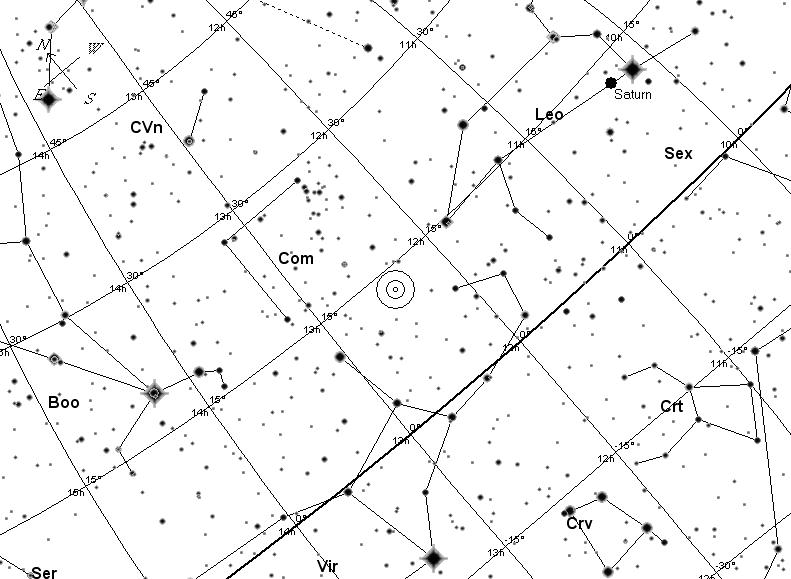 Finder chart 1 shows stars down to mag 6.5 and is intended to "get you in the general area". 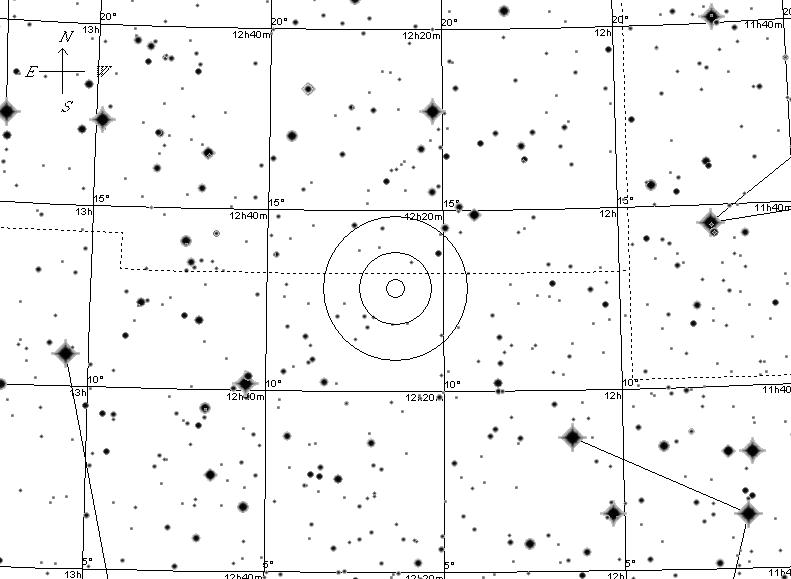 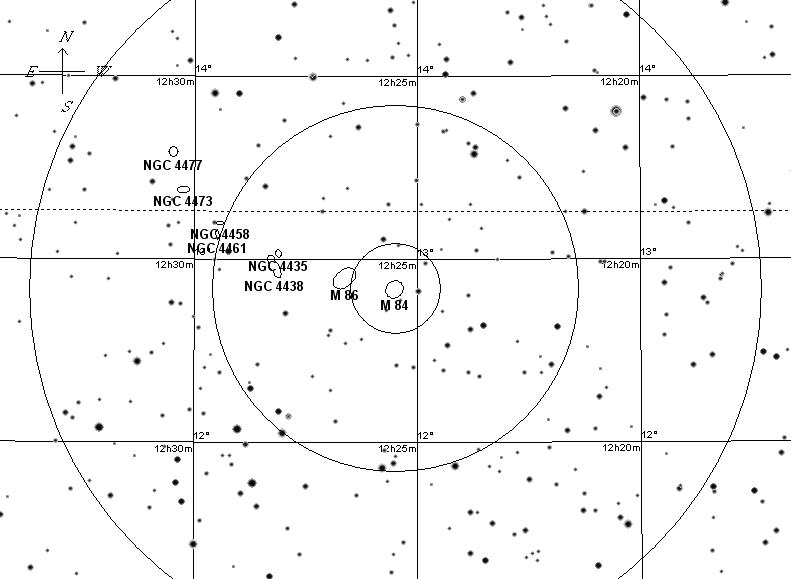 Finder 3 goes down to mag 13.  Also note, we're only showing the galaxies of interest in these charts. 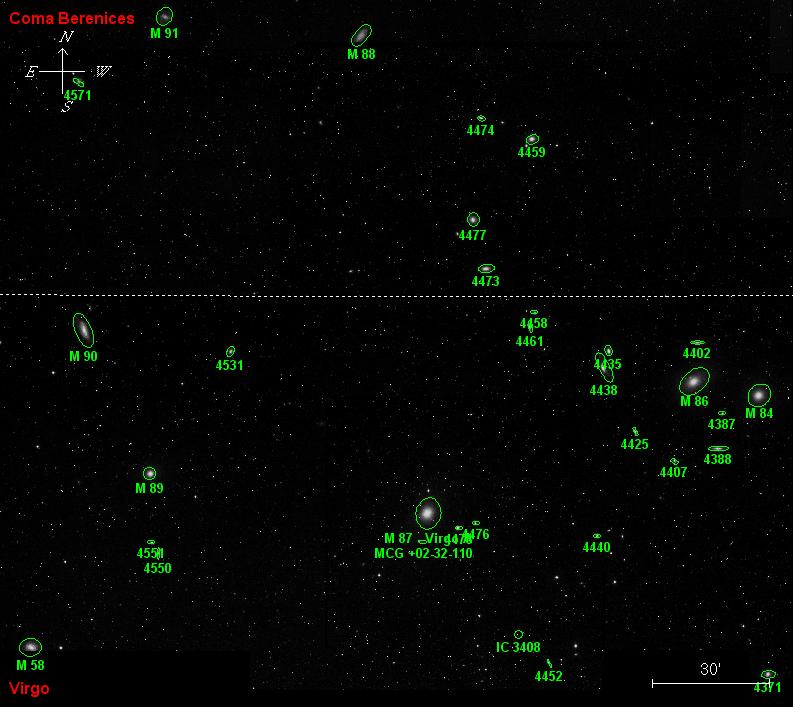 Here's a DSS image of the area to aid in identification.  Note the chain begins on the right middle with M84 and M86, so that's where we'll start.

Although these two are an optical pair, they really aren't the twins you might suspect.

M84 is classed (via NED - Nasa/IPAC Extragalactic Database) as an E1 elliptical and while viewing DSS images certainly looks that way.  M86 is an S0 - the first lenticular that follows the pure ellipticals.  84 shines with the luminosity of 55.8 billion suns, while M86 greets us with the luminosity of some 61.1 billion suns.  M84 is an active emitter of radio radiation and was recently confirmed (by hubble) to have a massive black hole at its center. 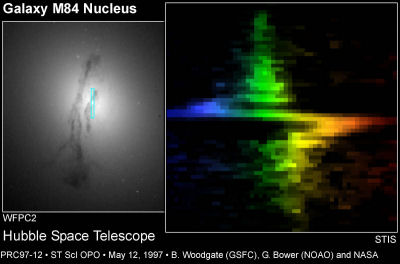 Above we see the Wide Field Planetary Camera 2 image of M84. The blue region marks where the Space Telescope Imaging Spectrograph was used.  From the red and blue shift visible in the STIS image, the orbital velocity of the gas around center was  determined and from that they obtained the mass of the core.  STIS data determined that 300 million solar masses are concentrated within a distance of 26 light years from the center. The most likely candidate for something this massive is a black hole.

Visually, it's all too easy to classify galaxies like these as mere whiff's of cotton in the night - more similar than anything else, but there are some differences for the visual observer.  Take some time and give them a good inspection; use higher powers and see if you can see any change in their structure.  Can you spot any differences?   In particular look for M84 fading smoothly into the background and for an extended halo surrounding M86.  M86 looks larger to me, but in a small scope, 84's core seems a bit brighter.

Both M84 and M86 were "discovered" and catalogued by Messier on the night of March 18th, 1781.  According to SEDS, Messier also cataloged six other objects in that area on this evening.  Having recently been lost there (again) with a Tele Vue 85 I'm somewhat surprised that he only cataloged 8 total that evening. 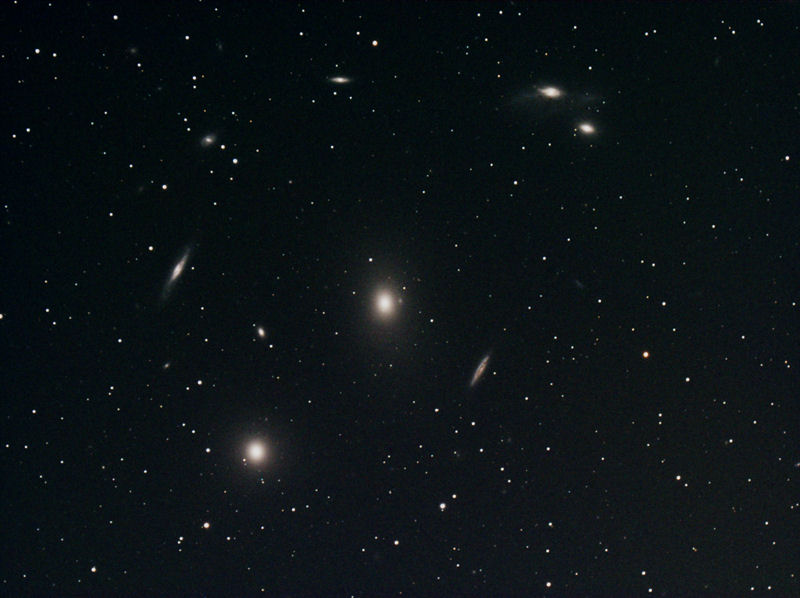 
Gary Beal submitted the above image of the southern end - Try using it as a training ground to see what galaxies you can pick out.

Buried within Markarian's Chain  (specifically 4438 type Sa, and 4435 type S0) we find Arp 120, otherwise known as Copeland's Eyes.  In a 1955 piece in Sky and Telescope, Leland Copeland called these two galaxies The Eyes as representative of their appearance in the eyepiece. 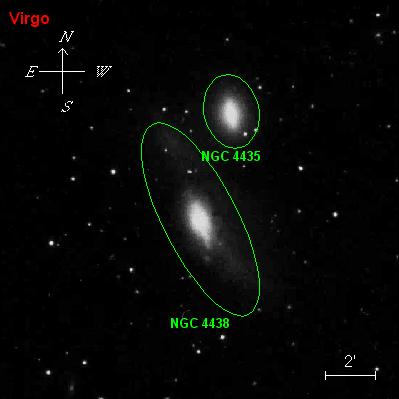 Arp classified these under  "Elliptical close to and perturbing spirals".  The question arises - which is the perturber, and which is the perturbed?  Arp suggested 4435 was responsible for affecting 4438, but in the Carnegie Atlas of Galaxies, Sandage and Bedke suggest that the current state of 4438 has nothing to do with 4435 but rather another merger of which whose galaxies are no longer individually visible.

See page 301 in The Arp Atlas of Peculiar Galaxies - a Chronicle and Observer's Guide (Kanipe and Webb) for more details.  In there, you'll find notes from Barbara Wilson - a CN forum member - describing their visual appearance in her 20" f4 newtonian. 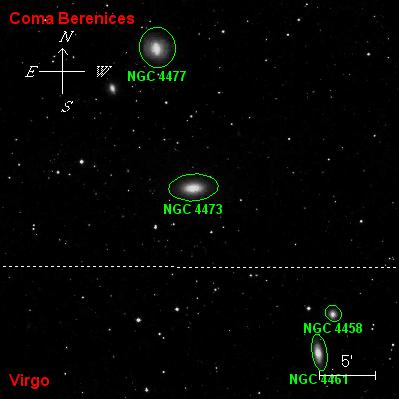 In smaller scopes like my 4" apo, I find 4461 is just a bright slash - almost stellar at very low powers, and 4458 can be overlooked entirely.  4473 and 4477 fare better but honestly, while these are pretty bright galaxies they are significantly overshadowed by the Messier showpieces in the area.  In my mind they make for an interesting sight mainly because of their association with the chain. 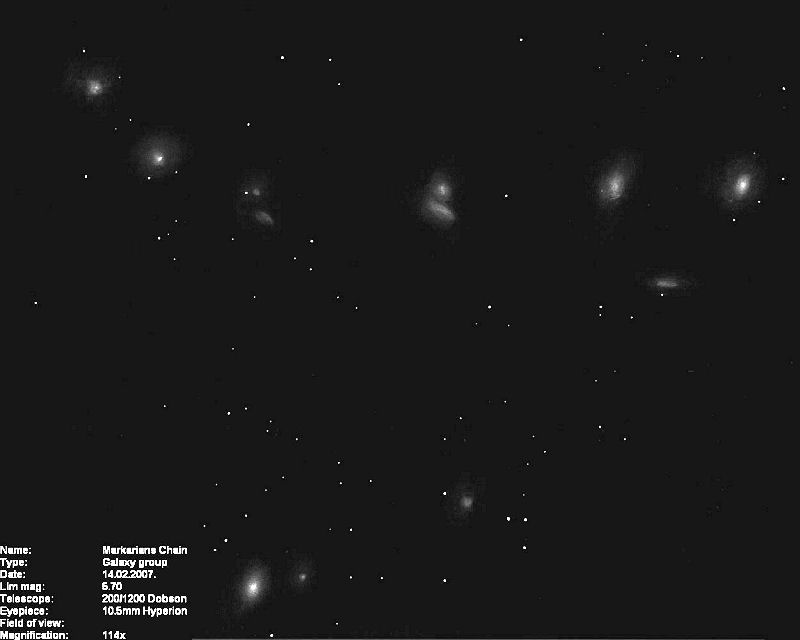 
And with that, that's it for this one.  Once again, thanks to the readers who submitted observations, sketches and photos, there were far more excellent submissions this month than I could use.  Your contributions greatly enrich these articles.

As always, I'm gratified if folks find my meanderings useful.

Atlas of the Virgo Cluster
http://www.atlasoftheuniverse.com/galgrps/vir.html

Just check this out.  Trust me.
http://wikisky.org/


If you liked this article, you may want to check out the rest of the series.
http://www.cloudynights.com/category.php?category_id=170

I'd love to hear of your experiences under the night sky - please feel free to
e-mail me or send any observing reports to: tomt@cloudynights.com
Please indicate if I can cite your observations in future columns.