Is it possible that the last time my 4-inch TV-102 Light Cup got to do any serious deep sky observing was way
back in June of 2003!  With the upcoming comet 9P/Tempel 1 Deep Impact event, we decided to take a trip
to a dark sierra sky hoping also to do some serious DSO hunting again.  Last year, my Light Cup stumbled
upon San Pedro Mártir Observatory in Mexico.  We made all of the camping reservation and trip preparation
to find out just a week before the trip only that the day of our arrival would have trivially coincided with the full
Moon

.  Talking about the worst of the worst DSO tyro observer

Well this year we got lucky for the July 4th holiday.  The observatory is located some 3 hours drive south of
Ensenada, Mexico (a total of 6 hours drive where we are!), 120km of which is over dirt road.  Ensenada is
approx. 2 hours drive from the California border.   The observatory is situated in the sierra at 2880m elevation
(that's over 9000+ ft.)  The tank of my SUV was topped to brim

.  Arriving in time for the nightfall, I put on
my disguise and ...

Narrator: Ron got out of the SUV and went to knock on the observatory's door.  Door opened
Astronomer: "Buenas Noches.  What can I do for you?
Ron: "Hello there!  I'm Dr. Brian Skiff 1 , the famous astronomer, deep sky observer, and comet discoverer
from the Lowell Observatory"
Astronomer: "Dr. Skiff de Observatorio del Lowell!  Hola y bienvenido!  Please come in.  We're very pleased
to have you visiting with us.  You can help us with doing spectroscopy work with the Deep Impact"
Ron: "Jolly good.  Thank you."
Astronomer: "One curious question: did you bring your renowned 70mm Tele Vue Pronto, the refractor you
observed a magnitude 14 star and many DSOs with?"
Ron: "Sure did.  There it is."
Narrator: Ron pointed his hand to his Tele Vue TV-102.
Astronomer: "Dios mio!  That's a mighty big 70mm refractor

Narrator: Another voice sounded nearby.  Ron B[ee] having been rudely awaken...
Spouse: "Ron Dear, is anybody home?  Did you hear what I just said?"
Ron: "Oh sorry Dear.  I was strolling in the galactic mental park working on a plan to get ourselves into
the observatory."
Spouse: "Err, I got bad news Dear.  The park [RB: where the observatory resides] is now closed to the
public for the night."
Ron :

No one is allowed inside after 8pm unless you're camping there

.  Well, the next morning we did manage to
climb back up to the Observatory again.  Here are some pictures for your enjoyment. 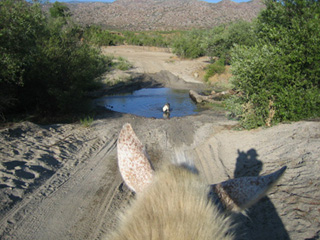 The Light Cup hauling trek to the observatory... 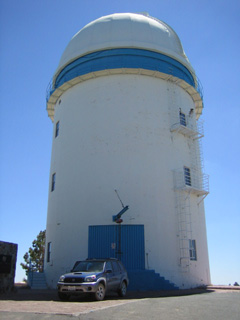 Gotcha, we went up in our SUV after 15 min. in the saddle 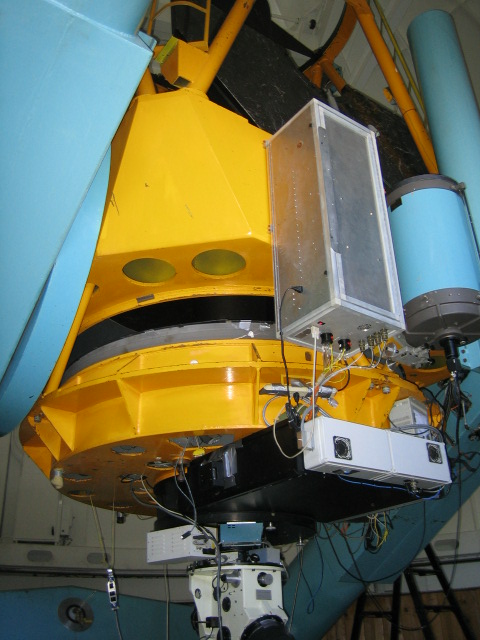 )  Note the thickness of that mirror!  I wonder how many people will be needed to carry it. 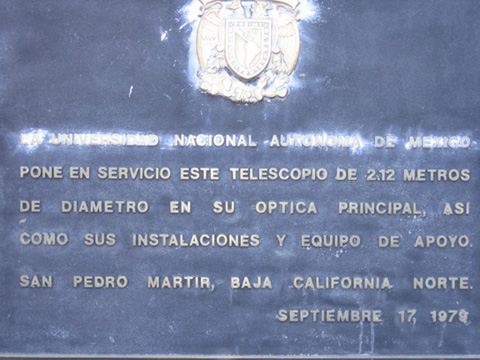 I managed to converse with an astronomer and a technician (José Luis) that maintain the telescope.  There are
15 technicians keeping the telescope "well-oiled"!  It was interesting to find out that the computers they used
back when the scope was installed in 1979 was a big Data General mini computer.  Nowadays, they've all
been replaced by microprocessors.  No eyepiece holder at all just like Brian Skiff told me about observatory
telescopes today.   All images are sent to and processed at their observation room one level below the
telescope.   Oh, they don't seem to have a cooldown time problem with the telescope; it's completely
environment control with a/c.   It was interesting to hear some of the stellar research they do, though my
technical Spanish was nowhere near good enough to understand

, not in English for that matter.  Also of
interest to know is how 'em astronomers have to eat, sleep and work near the observatory 'cause it's too far
to commute.  Very friendly professional folks

!
Here are some views from the top of the dome on a scary

narrow catwalk.  The observatory is located
half way between the Pacific Ocean and the Sea of Cortez.   If you look carefully, you can see the Sea of
Cortez at the horizon (first picture).  The Pacific Ocean was covered with clouds that day. 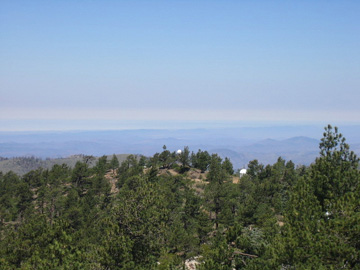 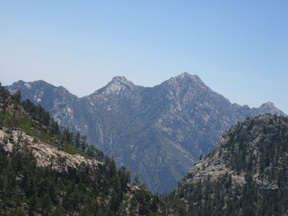 There's a Mexican tourism ads that says "In San Pedro Mártir, you can touch the Milky Way".   Here's the link
to the light pollution map of the observatory.   Good heavens, "Rising Milky Way confuses some into thinking
it's dawn"?  Wow, that's deep sky observer's mecca.   For the Deep Impact event (July 3rd for us westerners),
my Light Cup and I had to settle for approx. 6600 ft of elevation.  Nonetheless, the Milky Way was so bright
and splendid with the NELM of 7.2 which was the star SAO 65559 in Hercules (quite pristine but not quite
as good as the famed Anderson Mesa near Lowell Observatory

), arcing from the south to well beyond
Cygnus!  Transparency was probably not best 'cause the day time sky was not so dark blue.  But this is
darkest sky I've ever observed under and there were no light dome in any horizon that I could see!  In fact,
the sky was so darkly bright that I could see my hands and where my stuffs are pretty clearly but not bright
enough to read the chart without a red light however.  Here's the atmospheric extinction study of the region.
In some ways, my Light Cup was reluctant to let me pen this article for fear of mobs rushing to the area and
ended up importing much light pollution

Well after the disappointed comet and no show of the SN in M51, my Light Cup wanted to pursue the more
profitable Palomar globulars.  Several years ago, I had no idea what they were and found out about them
when Barbara Wilson, the famous deep sky observer and globular expert, who's so helpful to other observers,
sent me the link to this extremely informative article.   Now these globulars definitely belong in the light bucket
club.  But my Light Cup wonders if it can be all it can be

.  Here's another great site with good photo and
info.

First up was Pal 9.  According to the article, this one is the easiest of the Palomar cluster.  Now my Light
Cup was able to bag this one (our very first Palomar GC) back in 2002 under then the backyard NELM of
5.4. It was actually discovered by Herschel in 1784.  But he thought it was an open cluster with nebula.  It
wasn't until 1931 that it was recognized as GC by Per Collinder.  Pal 9 also has the designation NGC 6717.
I wanted to find out how it looks under much darker sky.  At 44x (20mm TV Plossl), it was immediately
suspicious, a very small unfocused star.  At 73x (12mm Radian), it was still a small but roundish glow just due
east of the magnitude 5 star, Nu2 Sagittarii.  At 110x (8mm Radian), Nu2 was so annoyingly bright that I had
to move it out of the FOV.  1-2 stars could be seen with averted vision.  3 stars could definitely be seen at
173x (5mm Radian) with direct vision, no longer very round.  Using the 2-4mm Nagler zoom was quite an
experience "getting closer" to the GC.  At 293x (3mm setting), greater than 5 stars could be seen with
averted vision.   At this magnification, it does not look round like the "normal" GC.  Any thing higher than the
3mm setting seems to elk less detail from view.

Not having done any serious DSO observation since 2003, I was afraid I'd not be able to see anything
with only 4-inch aperture.  But like a bicycle skill, one does not forget how to ride the telescope

, though
I still felt a wee bit rusty.

The next night, I decided to observe from the ranch by the swimming pool where we were staying which
was at approx. 2000 ft. elevation.  The ranch turns off the electricity which run off the generator at 9:30pm.
Since it was Mon. night, we had the place all to ourselves as everyone had left for the trip home!  After
lights out, the sky was quite good with no visible light dome and I estimated the NELM to be 6.9.   The
Milky Way seemed to be nearly as bright as at 6000+ ft. elev. 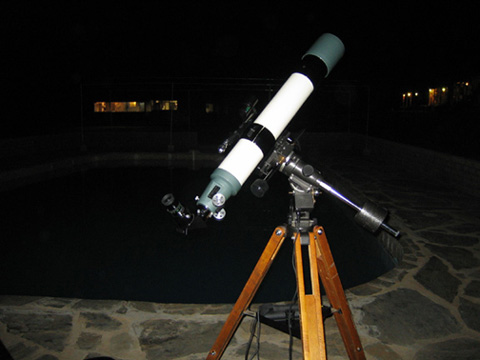 Next on the list was Pal 8.  Now one look at this photo should be enough to convince anyone with a small
telescope that it ain't no easy object

and re-christened Pal 8 as the "Ring around the Rosie [RB: oops I meant
to write] Palomar Globular" 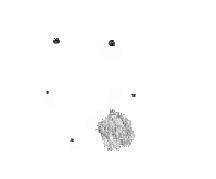 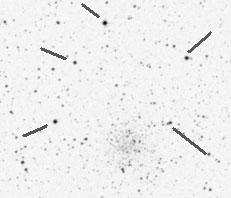 Next up was Pal 11.  But alas, I only had a finder chart that covers 8º of the sky and forgot to bring the
complete info as well as a constellation chart

; I didn't even know which constellation it was in!  Such
is the idiotic mistake of the tyro DSO observer

Last but not least, NGC 7044.  At mag. 12.0, this must be the dimmest(?) open cluster for my Light Cup
ever.  In Skiff's book (see footnote), the cluster is noted as a difficult object for a 15cm telescope with very
low surface brightness, although Brian did report that he saw it through his 70mm Pronto at Anderson
Mesa

!  Well, it was nowhere to be seen at 22x.  But at 44x, an extremely dim smudge could be
detected, best view.  At 73x, one (yes one) "lump" of stars could be seen embedded in the cluster - might
be due to the central condensation of stars in the cluster.  110x proved too much and turned it into just a
dim smudge.  The brightest star in this cluster is mag 15!  Here is the image from DSS to give you an idea
of how it looks like.  But photo can be deceiving; here's a sketch of how open cluster look like through an
8-inch scope.

I wonder if this is the dimmest open cluster in the NGC catalog.  If not, does anyone know which one is?
My Light Cup wanna bee all that it can bee

Well that was a grand observing time.  Too bad exhaustion set in both nights from driving and from staying
up late the other night preventing me from doing more scribing for my Light Cup.   My Light Cup and I plan
to do another pilgrimage to this Baja California mecca of deep sky observing

In summary, I much prefer dark sky DSO observing through my 4-incher than the sky with NELM 3.5-4.5
in the city even with my 8-inch Dob.  Every objects, open cluster, globular, nebula, galaxy and yes dim
comet all look better and subjectively more beautiful under dark sky, the way nature truly intended them
to be seen.   My Light Cup and I hope you enjoy this high sierra trip report, especially that trek on
horseback

1 Dr. Brian Skiff is a professional astronomer at the Lowell Observatory.  He had been so gracious
in helping others and the nobody like me with questions, data and observing tips from time to time
for which I'm most grateful.  He's also the co-author of the an extremely useful book which I own,
Observing Handbook and Catalogue of Deep-Sky Objects - highly recommended.