Seven Wonders of the Moon


Seven Wonders of the Moon

Lunar MISSION: POSSIBLE
The Seven Wonders of the Moon

If this is your first mission, you’re invited to divert your attention to the mission briefing ...

"Good evening, Observer "Phelps".   One of our deep-cover operative dressed
as a tourist on seemingly innocent tour to the Seven Wonders of the Natural
World has discovered that the tour company is a front for a covert plot to
carve out real estates on the Moon that are currently penny cheap.  They
intend to turn these real estates into the "Seven Wonders of the Moon" gold
mine to fund their aperture fever propaganda

!  Your mission should you
decide to accept is to survey these chosen real estates properties, determine
if the sites are truly wondrous and if possible foil their plot.  As usual
should any member of the observing audience be caught stumbling over his/her
telescope, Cloudy Nights will disavow all knowledge.  Good luck."

On earth we have the Seven Wonders of the Natural World, but what about on the Moon?  Well, don't
be embarrassed; I too forgot what the ones on earth are

.  Has anyone been to all of them?  Well, I sure have gone to only a handful of them

, Mare Serenitatis, almost 400 miles in diameter.  Rumor
has it that prime real estate property in this region is a strong possibility.  Its relatively smooth surface is
ideal for real estate developer.  In order to survey this region completely and well, you must watch it over
three different night, starting at a 5-day old Moon.  While exploring properties, you may wish to let the kids
out hunting tiny craters scattered throughout the dried "sea bed"

(see how many they can find). 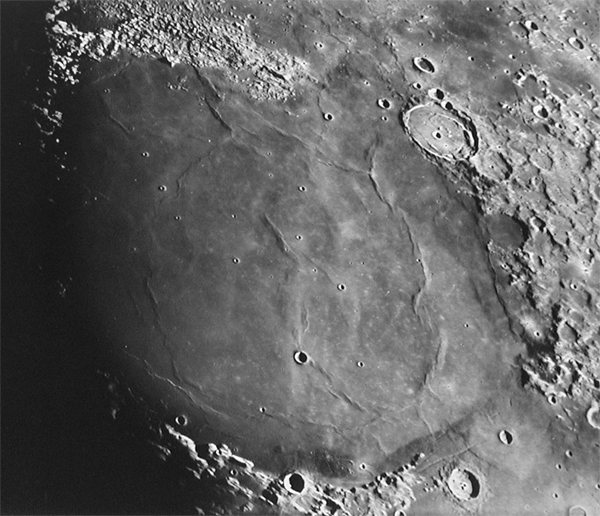 Sometimes when looking at the Moon at high power, one certainly can see lots of "trees" but misses out of
how the "forest" look like.  Here's an example.  Under low power of 82x (12mm Radian), my 5-inch NP127
Light Cup noted the color difference where Mare Tranquillitatis encroaches slightly into Mare Serentitatis; the
color of Mare Tranquillitatis is much darker gray whereas Mare Serentitatis is light gray!    It was also the first
time I noticed two very lengthy main ray emanating from Crater Bessel running north-south from both sides of
the crater!  My 2-4mm Nagler zoom revealed the Valentine Doom (4mm just right, 3.5 - 3mm able to get
scale-like :feel")

Of course, Mare Serenitatis is the result of a giant impact on the Moon.  But what's this?  Oh no, it looked like
we're too late and someone

had already staked a claim to the Sea of Serenity.

Ptolemaeus Area
Crater Ptolemaeus, Alphonsus and Arzachel indubitably combine to form one of the grandest area on the
Moon.  Here the potential for real estate development is limitless.  We have crater with flat floor and not central
peak and a shallow "saucers" perhaps due to saucer landing

Alphonsus has several craterlets surrounded by black material.  These black spots are believed to be volcanic
in origin.  Perhaps this is why this area is so prized similar to Paracutin volcano, one of the seven wonders
located in Mexico.  If you are in the area, be sure to rent a horse that will take you to the remains of the lava
covered church.  Astronomer Pickering thought the black patches in Alphonsus were vegetation.  Although we
know today that they're not, Pickering could have been "right" when this real estate is eventually developed and
a greenhouse can be built on top of the rich fertile black "soil" 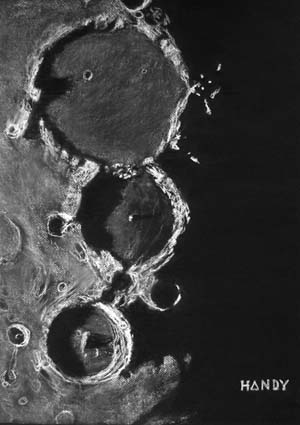 This region is also famous for reports from astronomers and amateurs of changes throughout history.  My Light
Cup and I have not witnessed any but we like to keep an opened mind

.  We shall revisit this site later in the
not so distant future.

The "Great" Straight Wall
What a prime real estate that stretches into the horizon for 110km!   Already this suspicious tour company are
planning of charging the amateur astronomer a premium package price in an attempt to lure the observer from the
tour to the Great Wall of China

.  But my Light Cup uncovered the racket and discovered that the earthy Great
Wall is a mind-boggling 6300 km long, nearly 6X longer than the Straight Wall.  See this interesting photo taken
by the Space Shuttle. 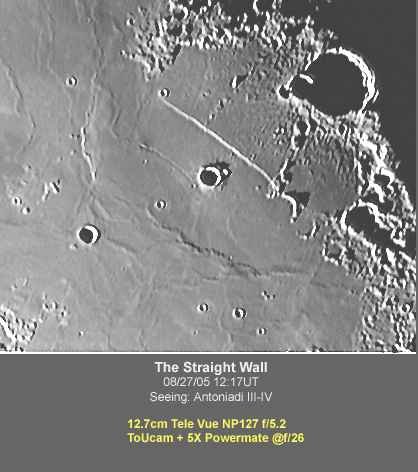 However, the Great Wall of China is merely 9m high at best in contrast to the Straight Wall which rises at a
slope of 41° to a height of 300m at its highest point!  It was interesting that with my 5-inch NP127 Light Cup, I
could not make out the Straight Wall at 16x but obvious at 33x (20mm TV Plossl).   Even at high power such
as 175x-200x, the Straight Wall indeed looks fairly straight but this Clementine photo shows otherwise

!  Thus,
the Straight Wall as Sir Patrick Moore aptly noted is neither straight nor a wall

.  Finally, my Light Cup has
imagined how the wall would look like on the surface on the Moon many times, haven't we all?  Well, let one of
my favorite author, Jack Kramer, stretch our imagination.


Copernicus
Dr. Charles Wood wrote in his book, The Modern Moon, that Crater Copernicus is one of the grandest craters
in the entire solar system.  So majestic is Crater Copernicus that astronomer Hevelius named it after "Mount
Aetna" when he first made a map of Copernicus in 1647.  During the dawn of lunar observation, the craters
were thought to be volcanoes.  So it should come to no surprise that Crater Copernicus actually was named
after this earthly volcano.  Fortunately for us all, the "fiery mountain" has been "extinguished" long ago by a great
impact

.  One can almost imagine the calmness on the floor of Copernicus some 55 km in diameter.  Here's a
ground floor view of Copernicus.  Wouldn't it be nice to have a log cabin one top of one of the central peak
1km above the floor 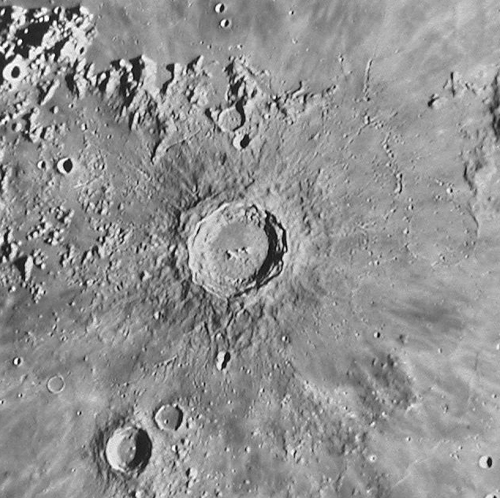 Clavius
Peter Grego wrote in his book, Moon Observer's Guide, that Clavius is a "feature of grand proportions and
great beauty."  And what a truly beautiful crater of a property it surely is

!  It is so large that the curvature of
the lunar surface can actually be seen through a small telescope, best view at 9-10 day old Moon.

Oh so you don't believe in any of these real estates tips?  Well, let us so inform you then that you may actually
be a wee bit late.  Back in 2001, a moon base has already been built on Crater Clavius 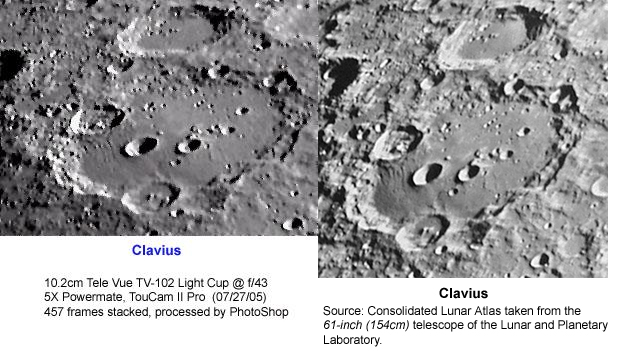 While scouting for a new home site, let the kids loose to go craterlet counting.  My 4-inch TV-102 Light Cup
counted up to 35 craterlets (which of course includes the largest crater within Clavius).  Chase, another fella
kindred spirit owner

of the TV-102 light cup, holds the record so far for a 4-incher of a whopping 43
craterlets

Sinus Iridium
Sinus Iridium must be the finest "bay" on the entire Moon.  Judging by its shape, perhaps Sinus Iridium deserves
the name "Half-Moon Bay" much more so than the earthly bay that bear this name southwest of San Francisco

!   Neither can the brand bay at Rio de Janeiro matches it!  When I took an "aerial view" of the bay through
my Light Cup, it looks like a prime spot for terra tourists

.  I can imagine that a hotel similar to La Quinta Real
that is situated on an old bull fighter ring in Mexico might be built into Crater Bianchini.  A nice yacht dock would
be situated near the hotel.  So distance to the north of the bay, lies a group of small protrusions that is similar to
Isla Mujeres, an island in the Mexican Caribbean 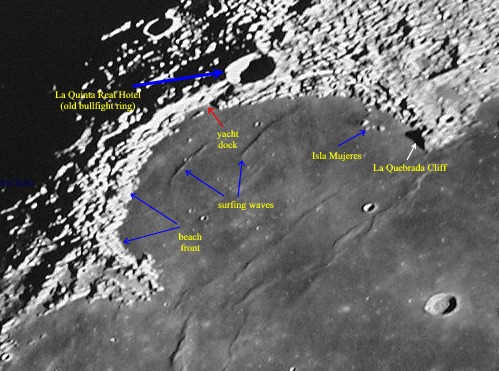 Finally, no image, photo nor even sketch on the planet can ever match the real-time eyeball view of this mag-
nificent bay, which seem to be glittering with "Montezuma's gold" along the cliffs at sunrise

Aristarchus Area
And at last, we've arrived at the last prime real estates spot.  The Lunar and Planetary Institute stated that the
Aristarchus region is one of the most diverse and interesting areas on the Moon.    This is the site of many strange
reports of changes.  In fact, Herschel reported seeing a red glow in 1783 near Aristarchus!  There are strange
looking rille and craters that take on "viper-like" appearance. 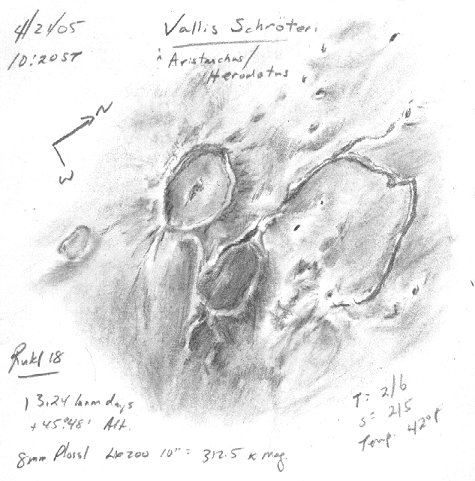 Esteemed CN member Erika reported the snakehead is at the SE end of Vallis Schroteri, the way the lighting played
in this area the valley almost could have extended straight through to Herodotus. There is a section below Herodotus
(doting hero of Aristarchus perhaps?) that forked out like a snake tongue to compliment the view

,  Aristarchus was just coming into view with the terminator just beyond the western rim.  I was
surprised to see that the rim is much taller (165x-220x) than when I usually observe it during 12-day moon.  The
Moon is not so static as one may superficially believe.

Before you leave this area, please be sure to visit this remarkable photo taken by in 1963 by Charles Capen, the
famous planetary observer and imager (remarkable because of the technology in 1963).  I wonder if "Chick" (as his
friend is fond of calling him) inspired the astronaut on the Apollo module to take this awesome photo of Aristarchus!

.   Here's an image of the entire Moon
showing the location of each of the selected wonders. 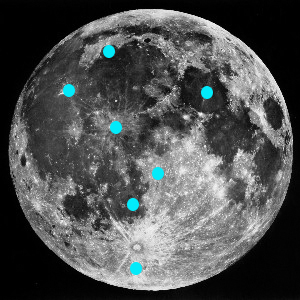 Although these seven selections are very widely known features on the Moon, my Light Cup and I hope you'll
agree with us when you look at these features that they are indeed the Seven Wonders of the Moon.  Just like
their counterpart on Terra, you can visit them time and time again and never be bored.   We also hope that you'll
do your observing with the same meticulous care as though you were house hunting for a fine property

.  And if you don't agree with my Light and I on
the Seven Wonders of the Moon, you'd certainly agree with this

Panned Candidates:
Perhaps for further investigation on your own

Unless otherwise noted, all photos in this article are courtesy of the Consolidated Lunar Atlas.