Well, the seeing wasn't all that great last night, Antoniadi III (IV at times L). But patience at the eyepiece and driven mount was rewarded with some good views. Here's the sketch I made at 176x. 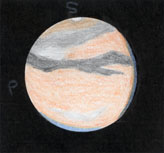 "I Spy the South Polar Cap". Just like the kid's game, can you see it J? Wow, this was
the first time that the SPC was not the first obvious feature since 04/27! The cap no
longer have a well defined boundary. Why, even the whitish blue haze around the NPH
was very noticeably larger than the SPC! Since the Martian summer has just recently
started, I wonder if the intense heat from the Sun would melt the ice cap completely
thereby creating a global flash flood J. I know Mars was closer to earth on Aug 27th
than at any time in 57,000 years. So, more seriously does anyone know if Mars will be
closer to the Sun than at any time in 57,000 years? Or perhaps the cap will get too
small to be resolved by small aperture telescopes like my 4-incher?

With no filter, #80A, Baader Moon & Skyglow filter and #38 filter, I noticed the
following rim was very noticeably darker (dark blue in fact) than the preceding rim.
This would indicate the start of the phase in the following rim. Neat! Just like our
Moon. My Light Cup curiously wondered why no observers of the past centuries ever
called it "Gibbous Mars", "Full Mars" and "New Mars" J.