Wow, it's been almost a month since I saw my favorite planet last L and boy, oh,
boy has it gotten shrunk down quite a bit and dimmer by almost a full magnitude!
The color has now turned yellowish orange again at 220x. In fact, the #25 red filter
is too dim now in my 4-inch TV-102 Light Cup.

Here's the sketch I made mostly at 220x. 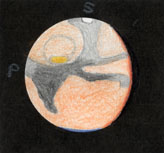 Though tiny, the SPC has not disappear completely in the blazing Martian summer. The
phase is so obvious and can't be missed. Overall, definitely less detailed than last month.
The Hellas region seemed to be washed out and bright under the #23 filter; must the dust
storm reported earlier this month. With difficulty I could see the "ring" that makes up the
Hellas but the northern section having a brighter patch. Syrtis Major appeared crisp. The
following rim is very noticeably darker than the preceding rim. However Sinus Meridiani
closed to rim was a lot lighter than Sinus Sabaeus as well as Noachis with Mare Tyrrhenum
showing similarly lightness at the opposite rim. A very thin dark bluish haze was noted at
the NPH region with #80A and Baader Moon & Skyglow filter. At the end of the session,
I tried 73x (12mm Radian) and the SPC could just be seen and 110x (8mm Radian) was
quite definite but not at 44x (20mm TV Plossl).

I recalled vividly that it was around a month after the 2001 opposition that the details
were really washed out due to the dust storm. I'm glad there's no global dust storm in
sight this time (not yet anyway).

PS - In case you missed the Light Cup's "Huygen's Challenge" back in early July, now is
your last opportunity to try to relive history J.