The Ghost and Mrs. Moon

If this is your first mission, you’re invited to divert your attention to the mission briefing ...

"Good evening, Observer "Phelps".   Following the recent broadcast of the
tear-jerking classic movie, The Ghost and Mrs. Muir, we have received reports
from Mrs. Moon that there are ghosts on lunar surface!  Your mission should
you decide to accept is to survey the lunar surface and uncover whether the
reports are true or a hoax.  As usual should any member of your observing
audience be caught stumbling over his/her telescope, Cloudy Nights will
disavow all knowledge.  Good luck."

... and my Light Cup got "dew" all over its objective lens after having watched the fine movie

.
It has been said that the Moon has been called "the cemetery of astronomers"

(i.e. most of its
features were named after astronomers) [Source: Epic Moon].

A dead crater alright, Crater Torricelli is probably known to some because of the interesting shape of
Crater Torricelli R.  Although it may not be obvious with a quick look, under my 4-inch TV-102 Light
Cup at 146x (6mm Radian), it is not difficult to pick out the ghostly shape.  Notice how the NW rim
is actually missing. 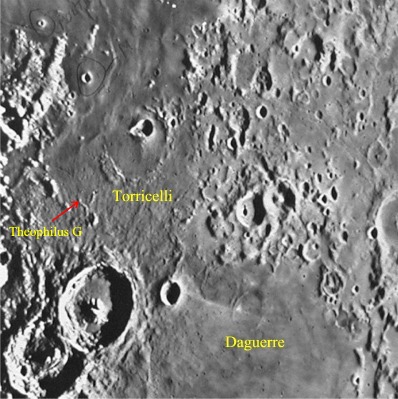 Now that we've spied on one, just what is a "ghost crater" anyway.  Dinsmore Alter, the director of
the Griffith Observatory in the 50's and 60's defined it as "the bare hint which remains of a lunar
feature that has been practically destroyed by some later action."  [Source: Pictorial Guide to the
Moon]  Umm, that wasn't very precise but better than nothing nonetheless.  So let's progress with
our mission using this "parameter"

Crater Lamont too sure looked like it's dead and buried, with a circular outline.  When viewing with my
4-incher, it looked awfully like a ghost crater

and is of very low contrast and not too easy to make
out. The best time for surveillance is when Lamont is near the terminator (eg. 6-day Moon).  My Light
Cup can make it out at 146x (6mm Radian).  The northern and southern portion of the rim does not
appear to be well defined.  With some research, Lamont has been referred to ghost crater in several
internet sources.   But is it?  Thanks to my good book, The Modern Moon A Personal View, it is
actually a network of concentric wrinkle ridges.   Therefore, in the psychic world of ghosts and globins,
one can never be too sure

of the "psychic medium".

While here, be sure to play close attention to the two easy to see Arago domes (next to Crater Arago),
which look more like ripen pimples on Mrs. Moon's face 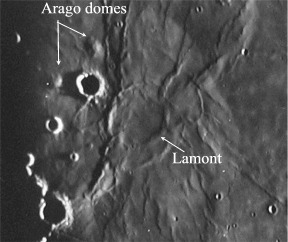 Another interesting ghostly burial site is Crater Daguerre.  At 146x, the outline is slightly blurry, ghostlike
appearance in a shape of a horseshoe.  Umm, perhaps a dead horse brought by the alien conquistadors
was buried upside down with one of its hoof almost sticking out of the grave

.  Or perhaps its southern
wall as covered completely by lava.  Good time to watch is a 6-day Moon.

On the other hand, a very obvious "paranormal phenomena" is Crater Stadius.  At 110x, it's so obvious
to me through my Light Cup that it's a ghost crater and its circular outline very apparent at 146x though
at a very low contrast.  Best viewing time is 8-9 day old Moon.

Not every feature on the Moon has been catalogued or named.  Just like the movie, "The Good, The
Bad and the Ugly", there's a buried treasure under the "grave with no name".  What do you know?  Just
north of Crater Aristillus, there appears to be a "noname ghost crater".  Indeed at 176x (5mm Radian),
there's a ghostly remain of a crater.  It's amazing despite the hundred of years of spying by various
astronomers, no name has been given to it!  Thus, my Light Cup would like to christen this crater, Crater
"Noname"

.  Note the splashes from Aristillus into the southern part of "Noname" and a small gap in
the eastern rim.  Best seen under low sun angle (eg. 8-day Moon). 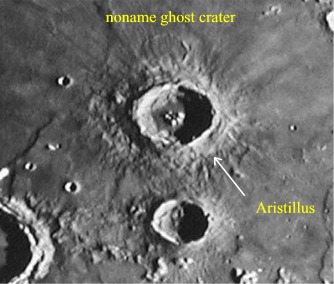 Here's a picture at the LPOD site that showed Crater "Noname" so very well.

No ghost hunting mission can be complete without a look at Crater Ptolemaeus B.  Even at relatively
low power of 110x (8mm Radian) through my Light Cup, it is very evident, like someone dropping a
good size steel ball bearing ball onto and dent my hardwood floor

.  Best be looking for it under
an 8-day old Moon. 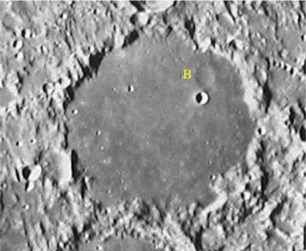 In the "espionage" business, one can never be really sure what sort of ghostly "plot" would be uncovered.
While surveying the surface of 5-day old Moon, my Light Cup stumbled onto the ghostly crater, Jansen
R, just north of Jansen.  This 25km remains of a lunar "corpse" is surrounded by 3 small craters, Jansen
E, L and D.  At 110x (8mm Radian), the ghostly remains could be readily seen but is best view at 176x
(5mm Radian) despite the poor seeing of Antoniadi III-IV.  The northern rim seems to be missing as if
some "enemy" of Jansen R came by and disrespectfully stepped all over the northern part of the grave

.
Here's the picture how Jansen R look like.  Also, what makes the sight ghastly is that the crater seems to
be slightly raised from the surrounding floor as if a lunar selenite was trying to push himself out of the
"cratery" grave

when the lava flowed over it

, perhaps similar to the fate of the residence of ancient
Pompeii? 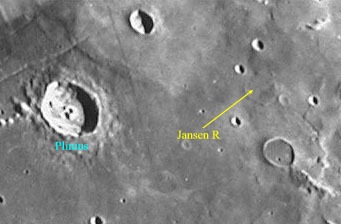 My Light Cup did a wee bit more research and stumbled across this incredible find, a photo by the
Apollo 17 mission.  It's sure a spying gratifying 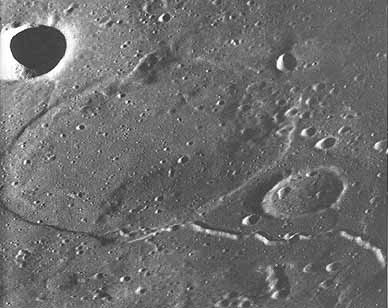 Not all ghost craters are large.  Having gotten a "Light Cup Hot Tip", I slewed over to a fairly small
crater Angstrom.  Lo and behold at high power of 176x, there's another "noname" ghost crater just
NW of Angstrom.  So small you can hardly see in the Consolidate Lunar Atlas photo! 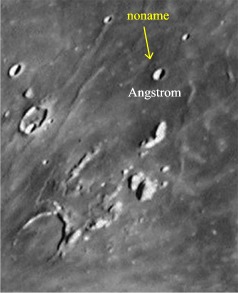 Could this be the smallest ghost crater on the Moon?   My Light Cup speculates that this crater
suffered from "infant mortality"

being that it is so small and how aptly it is place near Angstrom
(which is a scientific unit of measurement of 0.0000001cm!) .  Best espionage time is 11 or 12 day
old Moon.  If you can't see it, try consult this Apollo 15 photo (Angstrom is the crater at the lower
right hand corner).

Now, the majority of the ghost crater that our intelligence gathering has been, is located in the mare
region and with good reason.  This is because the lava rose to cover up 'em craters that were already
on the "plain".  What about 'em places in the crater highlands, eg. southern part of the Moon where the
area is heavily cratered?   Obviously, there's not a lot of mare lava that rose up to bury the craters alive
and turned them into ghost crater.  Led by the Light Cup " line tap", I can see several interesting craters
near Crater Nicolai, designated Crater Nicolai K and P.  On close and time-consumingly patient scrutiny,
they do seem to have similar resemblance to ghost craters: hardly any rim, very shallow floor, no central
peak. 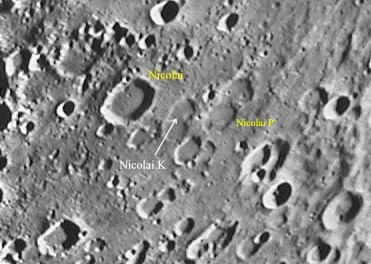 from the above inspection since they don't really look like ghost craters.  These craters are very shallow
with no central peak or perhaps with buried central peak and would have been completely buried had
there been lava that rose up to cover the rim like those ghost craters in the mare region, not quite dead
but not alive either

So is Crater Puiseux another "zombie crater"?  The rim is basically all intact at 146x and 176x.
Unfortunately, it's got a teeny central peak sticking out 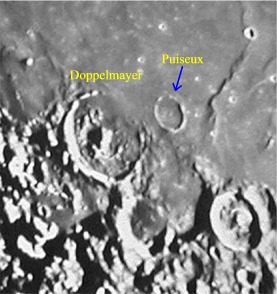 Last but not least, no "Ghost and Mrs. Moon" paranormal investigation is complete without Crater
Flamsteed P.  My Light Cup, currently still at the developmental stage of a lunar toddler, re-christened
Flamsteed P as the "Peek-A-Boo Crater"

.  Note how Flamsteed P form a shape of a ghastly face
with two small craters, Flamsteed D and Flamsteed K that represent a pair of ghostly eyes so
realistically

Crater Flamsteed itself as the lips around its mount, forming a soundless word of "BOO"
(soundless 'cause the Moon has no air - get it

?)  Try this crater on the kids on Halloween night! 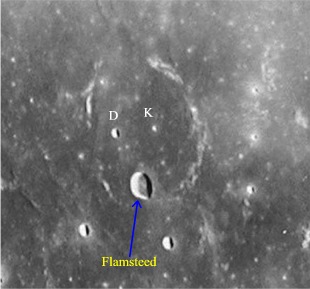 There are many more ghosts to be uncovered on Mrs. Moon.  Here's a set of mission assignments for
you to find if these are ghosts or hoax

.  And please post your findings on Cloudy Nights forum or
email us your mission report

We hope your mission went well with no "casualty" to 'em ghosts, i.e., you did not forgetfully leave your
eyepiece buried under the lunar surface, right

?  Were the reports of true ghost or true hoax

?
Finally, if and when my Light Cup eventually kicks the can some day, may it be buried in the lunar
cemetery  under  a cup-shaped "Cup Crater"

Unless otherwise noted, all photos in this article are courtesy of the Consolidated Lunar Atlas.