Old 37 Under the Stars with a DSLR 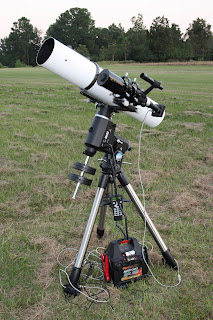 I was anxious to get my old friend, whose story I recounted here not long ago, out under the stars in hopes of findin’ out what she was made of. Would she be the astrograph of my hopes? Or would I need to think about that luscious new Orion MNT afterall? I thought you-all would like to hear the final results of my long, long ATM odyssey. There’s another reason I picked Ol’ 37 as the subject for this edition. After the firestorm of controversy generated by my last entry, “Ethos Mania,” I thought it would be nice to take off my flame-proof skivvies for a while. What else is in it for you? Even if you don’t care Pea Turkey about my homebrew rig, you may find the story of last night’s multiple imaging foul-ups…er… "instructive.”
Astrograph, eh? Why would I want to use something other than one o’ my beloved SCTs, anyhow? I’ve been imaging with my friendly CATs for years, but that doesn’t mean I use ‘em for everything or think they are perfect for everything. Let’s face it, 2000mm is a lot of focal length to deal with, and if, like me, you must use your scope in portable mode and are just naturally lazy about things like polar alignment (I sure am), cuttin’ down them mms helps. A lot. Get down to about 800 – 900mm of focal length and deep sky snapshooting becomes much easier. It’s finally possible to get nice, round stars without winding up needing a hair transplant.
How do you get down to these short(er) f/ls with a Meade or Celestron? You use a focal reducer. Which I do almost always—both f/6.3s and f/3.3s as appropriate. Tain’t no such thing as a free lunch though. The reducers work pretty well for me. But I ain’t aimin to be no celestial Ansel Adams. As I’ve said plenty of times before, all I aspire to is snapshots, humble pix that document my travels across the deep, deep sky. My “Instamatic” astrophotos will never appear in the Gallery section of Sky and ‘Scope, and that is just OK with me. HOWSOMEEVER… Even given my modest expectations, I am not always thrilled with reducers.
The most aggravating thing about focal reducers and reducer/correctors is that they cause a vignetting-type gradient in images with all but the smallest of small-chip CCD cameras; especially if you are shooting from skies that ain’t perfect. This “porthole effect” can be removed with a good flat-field frame, but since I work with a portable scope, it’s not very convenient for me to do flat fields. To do ‘em, your scope must be perfectly focused, and the camera can’t be removed/moved from the time you do the flats until you are finished imagin’. For me, that means leaving the focuser untouched run to run and arriving at the site well before sundown to do my T-shirt flats (shoot the sky at sundown with a “filter”made of T-shirt material over the scope’s end). Yeah, it’s possible to use light-boxes and other contraptions to do flats after dark when you can focus the scope on a convenient star, but that’s one more piece o’ gear to worry about and I am nearly overwhelmed in that regard already. That ain’t the only fly wigglin’ in the reducer ointment, neither. If there is an overly bright star in the field, the f/6.3 reducer/corrector, especially, tends to generate WEIRD-lookin’ reflections. In fact, Bubba down the street got all het-up when he mistook one of these odd blobs for a saucerful of Little Gray Dudes from Zeta Reticuli II.
Sure I’ve got my small-aperture APOs for those times when, for one reason or anudder, I don’t want to use my SCTs (having to track across the Local Meridian to get a shot and chancing mirror flop bein’ one). But it would on occasion be nice to have a little more aperture and image scale than these refractors provide. What to do? First thing I thought about was the 6-inch f/9 Richey-Chrétien the boys n’ gals at Astronomics are preparing to sell. I also considered the aforementioned new Maksutov Newtonian from Orion, a 7-inch f/5.3. I like new gear, sure, but I’m awful cheap as well, and I wasn’t overly happy at the prospect of shellin’ out 1300 bucks for either scope. Also, in the case of the R/C, I’d be right back in reducer-town in order to make its f/9 optical train suitably fast (a dedicated reducer is also not yet available). At the time I was pondering these weighty issues, the 37-year-old scope was comin’ together, and I began to wonder whether it might serve as an alternative astrograph and save Unk a grand or more. This hope was one of the reasons I opted for a diffraction spike eliminatin’ curved spider to hold up Ol’ 37’s secondary: If I want star spikes in an image I will put them there with Photoshop.