Here we are at one of the most famous objects in the sky.  How many astronomy texts have had a shot of the North America Nebula included?  How many brand new imaging rigs have been pointed at this amazing object?  We may never know the answers to those questions, but we can say that this part of the sky have been observed, photographed and imaged for centuries.

There is a lesson in distances of deep sky objects to be taught in this part of the sky.  I was a college professor at DeVry Institute in Phoenix, Arizona for over 26 years, so I will take a shot at it.

The red glow that is the NGC 7000 nebula is created by high energy stars embedded in a cloud of hydrogen gas.  These stars output ultraviolet energy that makes the hydrogen give off that red glow.  This process is called fluorescence.  This means that the hydrogen atoms take on energy from the powerful stars and then emit photons that provide the red glow.

In front of the hydrogen cloud is a dark molecular cloud that blocks off portions of that glow.  It is the shape of the dark layer in front of the bright nebula that provides the “North America” shape.  Notice that the areas which appear missing have fewer faint stars because they are being blocked off by the dark cloud nearer to us.

Now to NGC 6997, this open cluster appears to us near the area of the Great Lakes within the nebula.  After very careful study it has been determined that the star cluster is beyond the nebulous cloud.  This was determined by spectroscopic study of the stars in the cluster, they have the spectra of the nebula superimposed onto the star’s spectra.  Therefore, the gases in the nebula are between us and the stars of the cluster.

NGC 6997 has been mislabeled NGC 6996 in several sources, both books and charts.  Brent Archinal’s book on star clusters provides details on the mistakes made and gives the reasons for them.  If you like that sort of thing.

As far as observing the North America Nebula, I agree with Phil Harrington that binoculars are an excellent choice.  With a pair of 10X50 Leupold binoculars it is pretty bright, very large and the North America shape is easy to see.  There are 19 stars involved within the nebula and an obviously orange star (Xi Cygni) to the west of the nebula.  The dark lane that defines the “East Coast” is Lynd’s Dark Nebula number 935.

An RFT (Rich Field Telescope) is also a fine choice for viewing this big nebulous glow.  These are telescopes with a short enough focal length that they can provide a field of view well over one degree with a wide angle eyepiece.  Many years ago I put together a 4.25 inch f/4 Newtonian for just this reason.  Using a 20mm Erfle eyepiece and a UHC filter shows NGC 7000 as very bright and very large, filling the 1.5 degree field with nebulosity.  The brightest section is Mexico, an elongated glow that is pretty well defined.

The very best RFT I have ever owned was a 6 inch f/6 Maksutov-Newtonian.  The stars were small and well defined and the field of view showed excellent contrast.  Along with a 35mm Panoptic and a 2 inch UHC filter, this was the best ever view of big nebulae.  It is the only telescope I regretted selling.  With that setup this nebula is very well defined and showed light and dark lanes within the glow.  Again the nebulous glow is brightest in the area of “Mexico”; this is a rather high surface brightness area.  I counted 41 stars embedded within the nebula.  This is truly a “Wow” view of a famous object.

Don’t forget to remove the filter and put in some power, I used a 22mm Panoptic and a 14mm Meade UWA.  Both will show that several of the stars in the nebula are light orange in color.  The higher power will also show the very rich star field to the north of the nebulous glow.  There is lots to see in and around this part of the sky.

NGC 6997 is a pretty nice cluster with a 6” refractor.  At a site 100 miles from the lights of Phoenix with a 6" f/8 and a 14mm eyepiece it is pretty bright, pretty large, little compressed and shows 23 stars of magnitudes 9 and dimmer.  This cluster is moderately detached from the background glow.

Moving up in aperture to a 13" f/5.6 Newtonian and a 38mm Erfle shows the cluster as bright, very large, not compressed, not rich, a scattered cluster with several nice groupings within the cluster.  I counted 31 member stars including a nice V-shaped chain of 7 stars on the NE side. 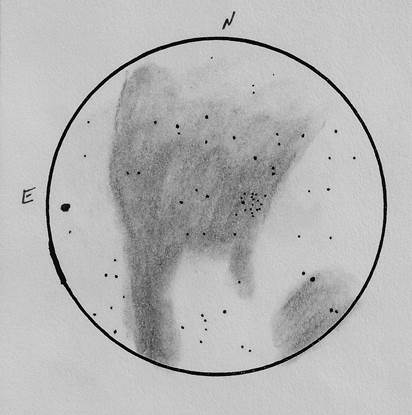 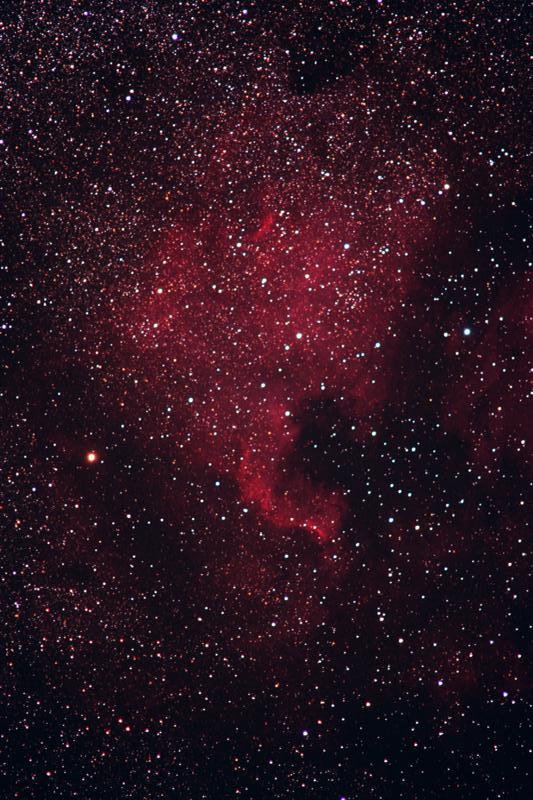