What's Up
What's Up CAPRICORN
by Steve Coe

I have always enjoyed an observing game called "constellation mopping". It involves seeing all you can within the boundaries of a particular constellation. Now, for Virgo, Hydra or Sagittarius that is going to be quite a trick. These constellations are large and "target rich", so, they will take a lot of trips around the Sun to feel like you have a "complete" observing list in that area of the sky. For lots of other constellations, including Capricorn, you can look at all that is within reach of a modest aperture in one clear weekend. So, if you wish to try this game, start with Capricorn, Sagitta or Lepus. You can observe all the brightest deep sky objects within that small or "object poor" area in a relatively short time.

One thing you might be asking is: where do I get information on all those galaxies, clusters and nebulae? Let me discuss some sources that answer many of my questions about what there is to observe with a particular constellation. The first is Burnham's Celestial Handbook, I know it is old and the positions are given for 1950 and there is a lot of discussion of coins and other things that are not directly linked to what there is to see at the eyepiece. But, it also has an excellent listing of the best and brightest objects there are to see around the sky. The second source is the Night Sky Observer's Guide. It contains modern data for a wide variety of deep sky objects to see and is also laid out by constellation. If you had those two sets of books and a good star chart, either Sky Atlas 2000 or Uranometria, you can keep busy for many years.

If you wish to do this with a computer, then there are lots of star charting programs to choose from, I use Sky Map Pro because it works like I think and so I find it handy. If you are looking for freeware then HN Sky or Carte du Ciel will do just fine. I am going to blow my own astronomy club's horn when it comes to data. The Saguaro Astronomy Club members have created several databases that provide information in several formats: plain text, comma separated variable and Excel spreadsheet. We can give you, free of charge, information on: deep sky objects, double stars, asterisms, red stars and navigation stars. Just go to www.saguaroastro.org and look on the left for "Things to Observe".

Ok, let's see what it will take to mop up CapricornÑthe constellation of the Sea Goat.


NGC 6903 is a small and faint galaxy. It is elongated 2X1 in PA 45 degrees and is somewhat brighter in the middle at 135X in a 13 inch Newtonian. There is a 10th magnitude star is on the NE edge. I think that there might be an error in the NGC description for this object. The description shows "CL" which means cluster, I think it is supposed to be "cL" for considerably large. 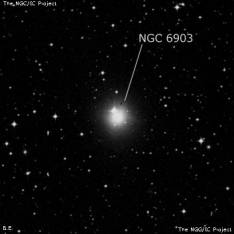 NGC 6907 is pretty faint, pretty large, gradually brighter middle and elongated 1.8X1 at 125X in the Nexstar 11 GPS. With averted vision it is more prominent. This galaxy still has a pretty low surface brightness. 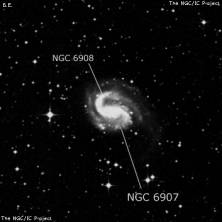 M30 is obviously the best of these objects, anything Charles Messier could see with his small telescopes will be easy with modern equipment. This globular is obviously non-stellar even in an 11X80 finderscope. I counted 27 stars at 100X in the 11 inch SCT (Schmidt-Cassegrain Telescope) and saw the overall cluster as bright, pretty large and much brighter in the middle. It is elongated 1.8X1 in PA 90 degrees. Going to 220X would resolve 44 stars and this would show a "beard" of stars south of the core. These are short, curved chains of stars that curl southward from the elongated core. Averted vision fills in the cluster with a background of faint and very faint stars. 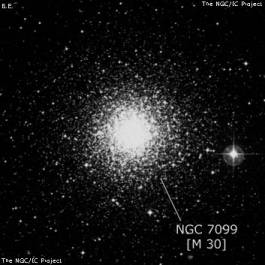 Palomar 12 is a low surface brightness globular cluster that was discovered at Mount Palomar. On an evening I rated 6/10 for transparency, I did not see it with the 13 inch scope. At a later date and at a much better site it was extremely faint, small and round at 100X. Raising the magnification to 200X made this dim object disappear. There is a triangle of 11th magnitude stars to the SW, they form a 30-60-90 triangle and are easily split at 100X. 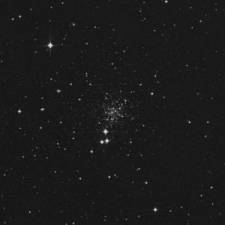 This image of Palomar 12 is from the digitized Sky Survey, field is 20 arc minutes.

RT Cap is a carbon star with a period of 393 days, it changes its brightness from 8.9 to 11.4 magnitude during that time. I had a fascinating view of this star on Dec. 22, 1995 with the 13 inch Newtonian at 100X. The bright planet Venus was about 10 arc minutes from RT Cap. On that night and ever since I have seen it as a dark orange color and I remember it being right next to the "Christmas Star" on that night.