I know that for many folks this is a difficult galaxy to observe because of the latitude where you live.  Seeing as how most of my observations are from Arizona I have gotten used to latitudes in the low 30’s.  I have traveled to the Table Mountain Star Party in the state of Washington and to the Oregon Star Party.  I was immediately educated about how low the southern horizon becomes at these locations.  I am including this galaxy in case northerners get a chance to visit further south.  If you are traveling to Arizona, contact me.  The Saguaro Astronomy Club in Phoenix is out observing often during new moon.  We would like to have you join in.

NGC 253 was discovered in 1783 by Caroline Herschel.  She was searching for comets.  When her nephew John took the “Large 20 foot” telescope to South Africa to complete the sweeps of the sky he wrote glowingly of this galaxy.  While at the Cape of Good Hope, John Herschel called it "a superb object" in the 18" aperture reflector.

Because I am going to use the word often in my observations, let me define “mottling”.  It is a characteristic detail seen in star clusters, galaxies and nebulae.  I hate to define something by what it is not, but my best explanation is that mottling is an appearance that is not smooth.  I generally see it as somewhat like a quilted structure.  My best example is the naked eye Milky Way as viewed from a truly dark site on a really clear night.  That detail in our galaxy is mottling.

NGC 253 in a pair of 10X50 binoculars is bright, large, much elongated and somewhat brighter in the middle.  There is one star on the northeast end and three stars on the southwest end that frame the galaxy.

Using a TV 102 refractor on a night I rated 7 out 10 for seeing and transparency this galaxy is very bright, very large and very much elongated 4X1.  The middle is gradually brighter.  Averted vision makes it longer, about 6X1.  There are 3 pretty bright stars at one end.  This observation was using 27mm eyepiece.  Going to a 14mm shows several dark elongated markings within the galaxy and brings out an elongated core.

In a 13" f/5.6 Newtonian at 60X, this galaxy is very bright, very large, very much elongated 4X1 in PA 45 and much brighter in the middle.  Even at this low power it is very mottled and shows a beautiful convex lens shape.  There are many dark markings within the outer arms.  Moving up to 100X provides an excellent view, a stellar nucleus is evident about 20% of the time.  There are 7 stars involved along with two pretty bright oval patches in the southwest arm.  There are lots of dark markings and the most mottling I have ever seen in any object.  At 150X with the 14mm UWA eyepiece, the core is gradually sculptured by dark lanes and a bright oval core has a tiny stellar nucleus.  At high power the core has a fascinating pattern of light and dark, but no spiral structure, more like a surrealistic painting.

This fascinating galaxy is a “WOW” object in most any telescope or binoculars you can find. 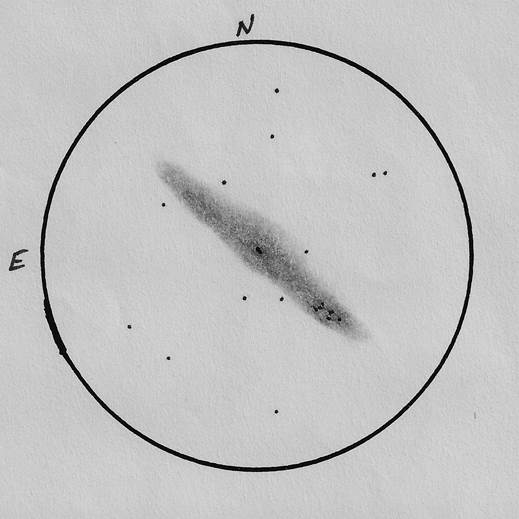 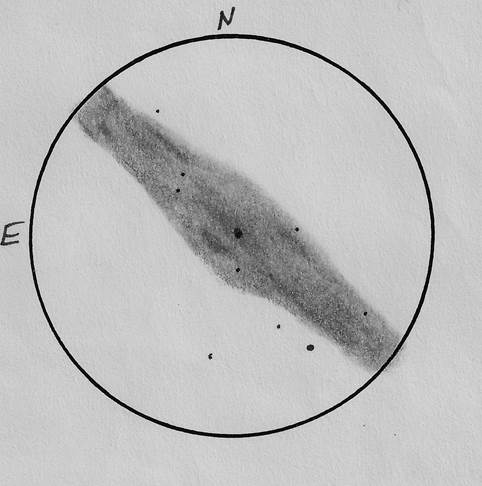 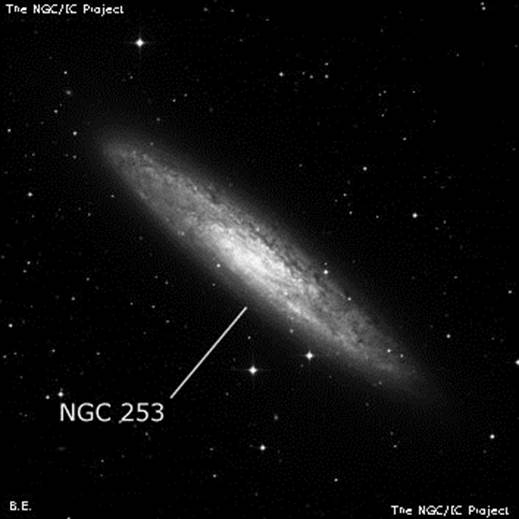