I have no affiliation with Astro-Tech, Astronomics, TeleVue, Orion, Celestron, StellarVue, nor William-Optics. 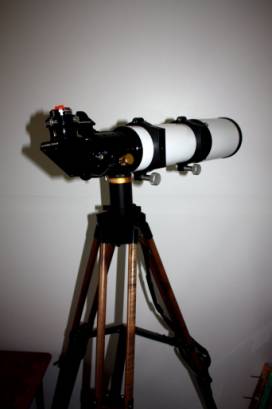 I don't want to sound negative, but I have been spending the last several weeks evaluating new Astro-Tech AT102ED (also offered in different flavors by Stellarvue, William-Optics, and Orion) purchased from Astronomics, almost trying to find fault with it, because a scope this nice, for this price just isn't impossible - or is it? Yes, it's a Chinese scope. Aside from a very few cosmetic issues, the quality of this scope is hard to believe. I received the AT102 with the feather touch micro-focuser (not the complete feather touch focuser that other vendors may offer), tube rings, dovetail, reticule laser finder, 2 to 1.25 adapter, front lens cap. The objective is 102mm, f/ratio is 6.95, focal length is 709 mm. Note that I only use my scope for visual use. I first did this review with very inexpensive eyepieces (at first), including 32 to 15 premium Celestron Plossls (silver with grip), and 9 and 6 mm Orion Expanses.

The finder is great. I have used this metal reflex / reticule finder before on other scopes and I just love it compared to the normal magnifying mini-scope version. I often look at things that can't be seen, I just estimate where they are, such as most of the Messier objects, such as M104. There's nothing to see in a standard finder when looking at very far away objects, so I just put the laser dot in the area of the sky where I think the object is. For a brighter object, just place the dot right over it. That said, at first I had some difficulty keeping the finder from moving around its base. Although, I did finally get it tightened down somewhat. I was afraid to hurt the scope by tightening it down too much, but you can get it tight.

I've owned dozens of telescopes of all sizes and types, so I consider myself qualified to evaluate this scope.


Positives
In conclusion, I honesty have the feeling that someone slipped a high-end APO into the box (I'm not complaining) which just happens to AT102ED on the side, instead of the scope I was supposed to get. Hands down, this is one awesome scope. I no noticable chromatic aberration in this scope (which should be there with FK-61 glass), on any target, except for some very slight red flaring on high magnifications, and slight yellow edge to the moon (a subtle line on, but not off the edge) - no purple flare, no yellow limb. For those who say FK-61 glass is substandard, or not real ED glass: it may be slightly less corrected than FPL-53, but having been an FPL-53 owner, I find the difference extremely small. I expected a lot less in this glass and scope, but instead received an outstanding value in build and optical quality. The mount in simply the best manual Alt-Az around, allowing you to focus on the sky instead of the mechanism -- just set it once and forget about it for the night. And, the Ethos, is well, the holy grail of eyepieces -- don't let the price scare you away. So, I highly recommend the Astro-Tech AT102ED, William Optics Ez-Touch mount, and the TeleVue Ethos 13.