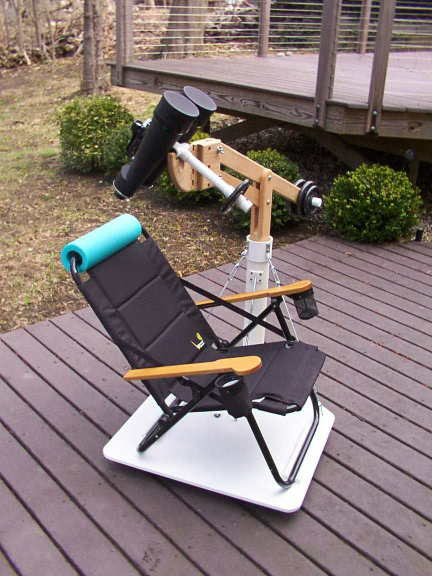 I recently I purchased a new pair of Apogee 25x100's. Pleasing optical performance, great light gathering, but their ten pounds made my existing light weight parallelogram mount flex like a diving board once I put the required amount of counterweights on it. Obviously, I needed something stronger. I've always liked sitting back comfortably to use binoculars. But even with my smaller binos on the parallelogram mount, I was constantly moving the chair around the tripod in order to see the whole sky.

I have often drooled over the ads for the robotic, gun turret style Starchair 3000 . But more realistically, I was intrigued by the look of Sim Picheloup's "couch potato chair" It swivels, it's light, and easily taken from place to place. The problem was, it wasn't designed to handle Mega Giant binoculars. From the photo's I've seen of the CPC, it seems like a friction connection holds the binocs in place, and this type of support just would not take the torsion loads that ten pounds would exert. It was time to sit down at the drafting board and come up with a new design.

I started with the premise that the seat would be a folding, light weight, beach chair. Some internet searching turned up what's called a "Wilderness Recliner" made by GCI Outdoor , a nicely padded, light, portable hikers chair that not only reclines, has wooden arm rests, but also incorporates built in cup holders, mesh pockets (obviously for star maps…), and built-in straps that turn the entire chair into a backpack. Sold! The next given was that the platform that the chair sits on should swivel 360°. A Shepherd 12" diameter, heavy duty, lazy Susan, ball bearing swivel would handle that. But now the bino support…

In experimenting with a photo tripod, I quickly realized that these binoculars would be far easier to move about in altitude if they were counterweighed. This would eliminate any need for tightening and loosening any kind of clamping device. My 12x60's use a small counterweight to keep them from swinging about their mounting post and I decided to use a similar arrangement for their bigger brother.

Sim's CPC holds the binos from above with a cross bar that runs over the head of the seated user. Since my binos are very large, their center of gravity puts the eyepieces quite a distance from the mounting post, and thus a simple, fixed swivel mounting would necessitate constantly having to readjust ones seating position in order to keep the oculars at your eyes. There was also the problem of having a bino at a fixed distance from your face. You can't look over it to use a red-dot finder, and if it's close enough to put your eyes to the ep's, it's too close to sit down "behind" it.

Fashioning a few cardboard mockups quickly showed that with binos of this size, the only usable solution would be to use a parallelogram type mount. The users would sit down, pull the binos towards themselves, and adjust the height as needed without having to fasten, or loosen any pipes, clamps or other holders. The question was, how to fasten the parallelogram to the chair, or to the swiveling platform? The binos, their counterweight of about three pounds, the parallelogram mount itself, plus the counterweights at the far end of the fulcrum would end up being too heavy to mount to a chair as light weight as this one. This entire ensemble would have to sit on the platform next to the chair. Because tripods take up too much room, I decided to try for a pier type mounting. 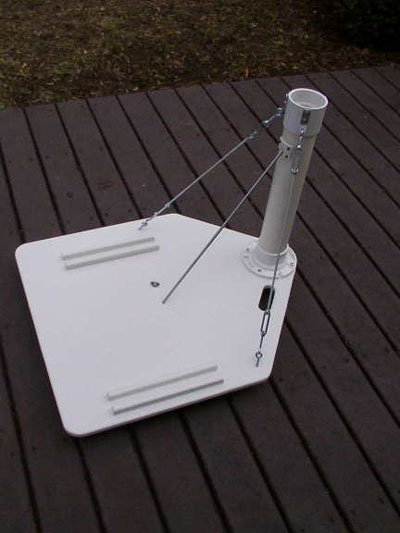 By bumping out the platform very slightly to one side of the chair like an outrigger, there would be enough room to fasten a short 3" diameter PVC pipe pier via an upside down PVC toilet flange. To make sure the pier didn't wobble back and forth with all the weight it had to carry, I attached "rigging", two sets of threaded rods from the top of the pier to the platform which tension the pier against a steel rod brace. Once the threaded rods are tightened, the pier is rock solid (Photo 1). 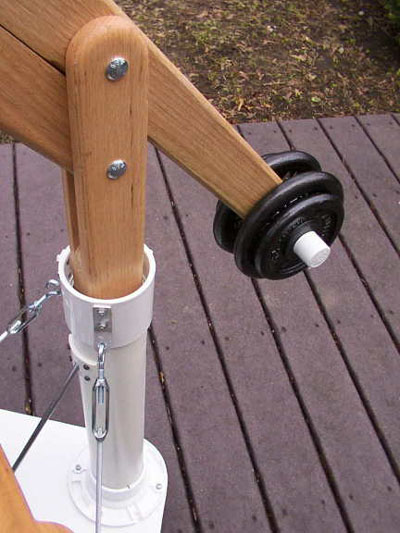 Due to the length of the binos, the mount would be in front of me viewing about 45° above horizon. Straight up viewing required raising the mount directly above my head which meant the lever arm would have to be raised a significant distance, altering the left/right distance of the binos as related to the observer. Also, the shorter the moment arms on the mount, the heavier the counterweights would have to be to balance the binos. Ultimately, a 15" cantilever was a good compromise of weight to length (Photo 2). 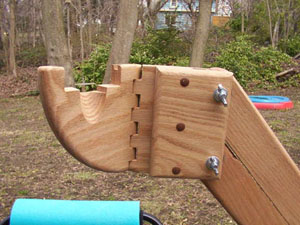 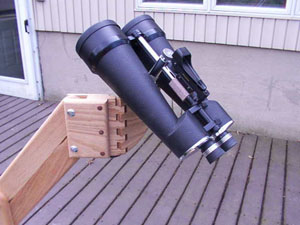 One more variable crept into the mix. Since the parallelogram mount would be moved not just up and down, but forward and backwards in relation to the viewer, another axis of movement had to be introduced to the binoculars at the head of the parallelogram mount. By making a wooden hinge where the binos are attached to the mount, I could now turn the binos at their attachment point, thereby adjusting their relationship to the user as they are brought forwards and backwards (Photos 3 and 4).

As you can tell by now, the simple one step setup CPC grew and grew and became more and more complicated. Although not a featherweight, in it's final version, I am still able to put the chair with attached binocular case on like a backpack, carry the platform by it's cut out handle in one arm, and the parallelogram in the other. I wouldn't want to walk a mile with all this stuff, but a hundred yards or so from my car to my favorite viewing site isn't bad at all. I also could have shaved off an additional few pounds had I used plywood instead of flake board for the platform.

Assembly takes about three minutes and goes as follows: Put the platform down. Unfold chair and set onto platform. Insert PVC pipe and tighten threaded rods. Insert parallelogram. Attach counterweight to binos and set on parallelogram head. Sit down and observe. 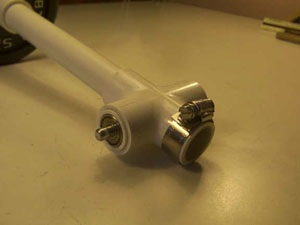 The lazy Susan bearing had to be offset slightly towards the pier to address the off center weighting on the platform, and works very smoothly. The altitude pivot at the binoculars was made of press fit rollerblade bearings in the PVC connector with a 5/16" diameter steel axle (Photo 6). The movement is smooth as silk and combined with the effortless chair rotation, allows me to view any portion of the sky in ultra comfort. Can't wait for warmer weather to get some extended viewing done in this "comet couch". The cup holder filled with a mug of hot coffee, the Discman playing my favorite music, a set of star maps on my lap, and I spinning 360° to view my favorite DSO's. Does it get any better than this?