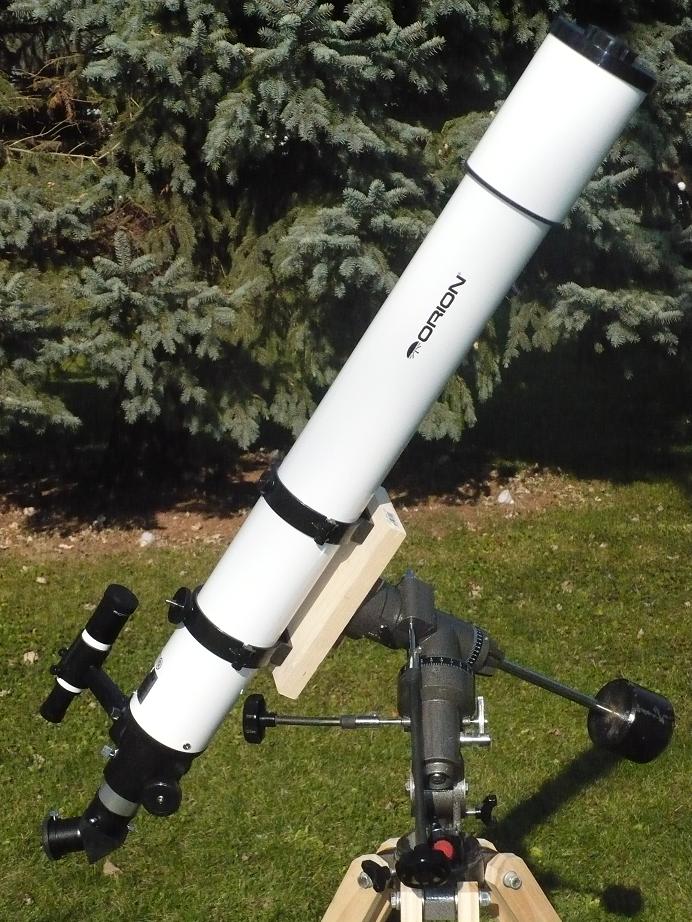 I purchased an Orion 90mm f/10 refractor OTA recently, given that the price at the time was $129, it was one of those “I just can’t pass this up” kind of telescopes. When I first started seriously looking at telescopes as a young married man, I would longingly gaze at the 90mm Meade refractors for sale, and drool at the thought of getting one. I have a 60mm f/15 and 80mm f/4 refractor, along with some 127mm scopes, so this scope really seemed to hit the “sweet spot” between aperture and portability.

Given that the shipping box was about 4 feet long, I started to expect a longer, bigger scope for some reason. Upon opening, there were two boxes: One with the scope, and one with the accessories. Oddly, though the accessory box had more than sufficient bubble-wrap and packaging, I was disappointed in how little packaging material was included in the telescope box. It seemed like it could have been rattling around in there! Alas, not to worry, it all survived just fine and in good shape – it was well wrapped with tissue paper to protect the enameled finish, and tucked in a long bag.

Opening the accessory box, I was surprised to find not only the standard included items (25mm and 10mm Plossl eyepieces, 6x26 correct image finder and finder bracket), but there was – a tool bag! Yes, a small plastic zipper bag with a small-to-medium sized Philips head screwdriver, two open-ended wrenches, and a small closed-end wrench. How many things can one buy today that comes with its own tool set? I found that to be a very nice touch. 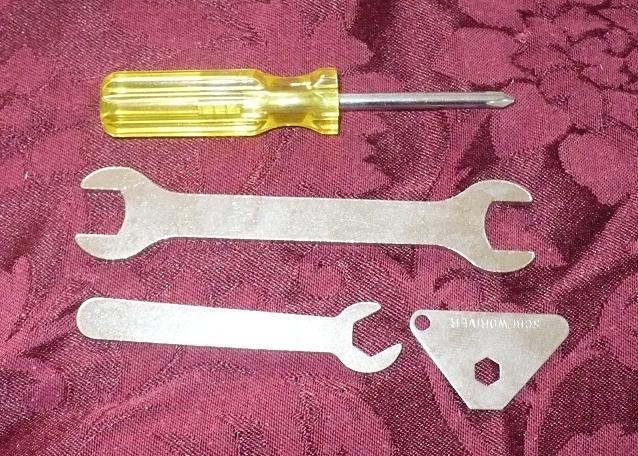 Externally, the objective has very deep green multi-coated optics. From what I understand, these are the “good” coatings that really reduce reflections and allow more light to pass through the glass. However, taking a picture of the lens reveals what Orion’s own information does make clear: Although the lens has “multi coatings” (on the external glass surface), they are not “fully multi coated” as evidence by the purple flash reflection also evident in my photo. 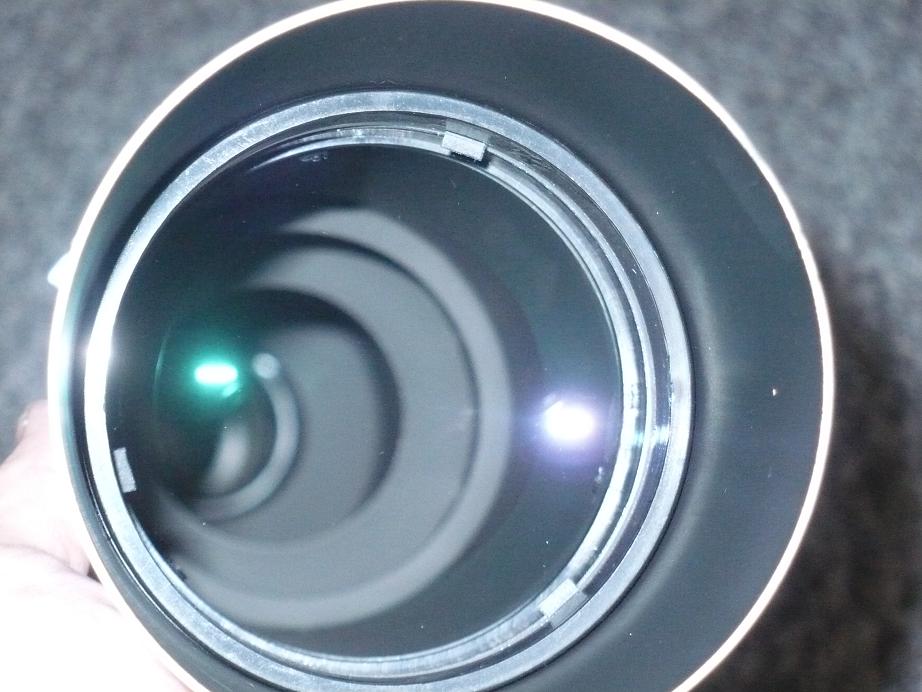 The interior baffling of the tube looks quite nice, and I even noticed that there are baffles cut into the inside diameter of the focuser assembly where a diagonal or eyepiece would go; not something I would have expected for a $129 OTA. The finish is perfectly acceptable, though if to be incredibly being nit-picky, I could say that the tube has some orange-peel to its finish. Beyond that, I can’t find anything wrong, and the orange peel actually works well with the hammer-tone look of the focuser assembly. But I’m not one to “ooh” and “ahh” over the outside of a scope; I care about how it looks THROUGH the scope. (Figure 3, if desired)

Not having an Orion tripod with their standard dovetail mount, I knew I would need to adapt this OTA to a mount I either had or perhaps make one. Having an equatorial mount in my garage that seemed to be about the right size for this scope, I brought in the poplar wood mount that I fashioned for that mount some time ago. I removed the dovetail bracket from the Orion tube rings, and slid the rings slightly closer together. After removing the portion of my poplar mount that I had made for an astrophotography setup, all I needed to do was add the ¼ washers to the end of the Orion bolts, and I was able to put my adapter right on the tube rings – wow! That was easy. 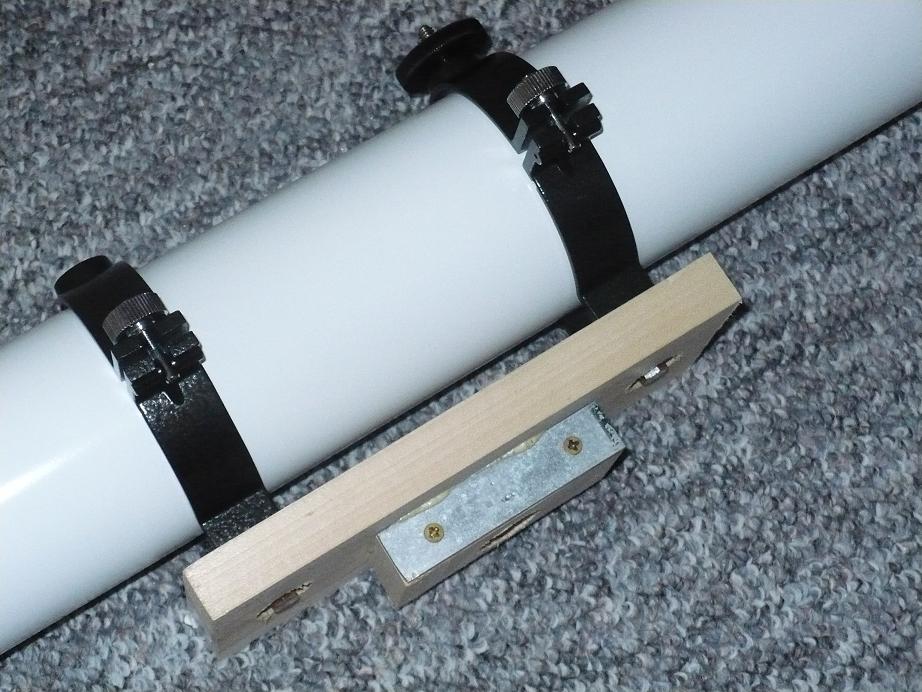 I found moving the scope on my relatively small equatorial mount was not difficult – I could hold it with one hand and still open doors and maneuver through them. I pointed the scope at the furthest spot I can see from my backyard – approximately ¼ of a mile. With the supplied 25mm Plossl eyepiece, shrubs in the foreground snapped into view. Adjusting focus, the bricks in the background were tack sharp. Nice!

I slid in the 10mm Plossl with my 90 degree star diagonal – same thing visually, of course this time with increased magnification and reduced field of view: Sharp and crisp. Adding my 2x barlow, I was still able to bring everything into focus, with plenty of focuser tube draw. I can’t wait to get this thing outside at night!

One thing I did notice while maneuvering the scope around on this mount is that I will likely want it on a higher set up. The tripod legs I built for this mount were made to hold an Orion Short Tube 80. And at the height it’s at presently, it’s perfect for that. But this much longer 910mm OTA forces the eyepiece far too much towards the ground – not the scope’s fault, of course, but rather a mount issue. I’ll likely need to build longer legs. Just beware that you’ll want a very tall tripod for this scope – I’m 6 feet tall, and to sit comfortably with the scope pointing straight overhead at the zenith, I’m guessing I’ll need about 5 full feet of height for the tripod to keep the eyepiece above 3 feet.

Finally getting this scope outside proved that it really is a gem of an in inexpensive scope. One thing that most people worry about with an achromat is chromatic aberration, and I was determined to push this scope to see how bad it would be. Focusing on Jupiter with a 25mm eyepiece, there is some CA around the planet. With the included 10mm Plossl, there is definitely a purplish haze that danced around the planet’s limb.

But there’s the interesting part: Jupiter, being bright, can take far higher magnification without image dimming being a problem, so I inserted a 2x barlow into diagonal. CA was definitely reduced, though by no means gone. I then placed the barlow directly into the focuser tube, and placed the diagonal into the barlow. The CA was even LESS now! That’s one nice aspect of an optical element that diverges light in an optical system, and the sooner that is introduced, the lower the chromatic aberration observed.

I then decided to really push the magnification to ridiculous extremes, just to see how the objective lens would handle it. I placed both my very good Meade achromatic 2x barlow AND a Celestron shorty (1.5x?) barlow into the focuser tube, then the diagonal into them, with a 10mm Plossl in the diagonal. Orion suggests a maximum magnification of 182x for this scope, but I figure that with this set up I was somewhere in the neighborhood of 275x to 350x. Although challenging to get in focus (due to the mount vibrations), I was able to see incredible detail on the Moon with this magnification. Not bad at all for an inexpensive 90mm achromat – approximately 80 to 100 power per inch of aperture! (Full disclosure: I did this test while the sky was still light, so the difference between the dark night sky and the Moon was reduced, and the CA may not have been visible due to this.)

So is the chromatic aberration there? Yes. Is it noticeable? Without a barlow, it is - on very bright objects like Deneb or Jupiter. With a barlow, it become less noticeable, and isn’t visible at all on DSO’s, of course. An apochromat, it’s not. A darn nice inexpensive achromat that can be pushed a long way on magnification, it is.

And this scope really excels as an “all around” performer, too. In addition to Jupiter and the Moon, I looked at the following well-known objects:

And a few “off the beaten path” objects

This OTA comes with a 45mm erect-image diagonal. These are not well-suited for astronomical observation, so I did not even use it except to aim the finder during the day. However, being an OTA-only option, it’s likely many customers would already have a 90 degree star diagonal.

The finderscope is very small. At 6x26, it’s not much of a step above a red-dot finder. And during the day, I noticed it had a strange tendency for the cross-hairs to “image shift” slightly as I tried to keep my eye centered in the eyepiece while aiming at objects. It’s not terribly objectionable, and I didn’t notice it as much at night, but it was strange.

I don’t personally care for the knobs on the rings to hold the scope in place. Certainly if one is wanting to quickly add/remove the OTA from the rings to allow for fast scope set up / storage, they would work well. I feel like with my (sometimes bumbling) fingers they could slip off if I’m not careful to make sure they are in place securely, due to how little pressure they feel to have on them when the scope is loose enough in the rings to allow for easy scope-turning. However, this is a minor issue, and with care, is never likely to cause a problem.

Overall, this is a great telescope – especially for the price. I found that it cooled quickly to ambient temperature, not having a large mass of glass for the objective. It was easy to move one-handed from my house to the yard, even with the long tube length and a tripod/mount attached. Its aperture is sufficient to show objects that one might not expect to see in a scope this size, and has a long enough focal length to allow the user to really pump up the magnification to very high levels, with an objective that keeps the focused objects clear. Colors are bright and distinct for stars, and I saw some color in M42. It does suffer from some minor chromatic aberration in certain, bright-object situations – it is an achromat after all. But for visual use, the effects of CA can be mitigated with a barlow to barely perceptible levels (when magnification is likely desired anyway), and for a lot less money than an apochromatic refractor.

Unfortunately, presently it seems that Orion has discontinued this product as an OTA-only option. That said, the same telescope is available with an equatorial mount and some slightly nicer accessories like a 90 degree star diagonal and a slightly improved 6x30 finder for $329. Given that that option comes complete with two Plossl eyepieces, I can’t help but recommend that it would be an excellent first scope that will give an amateur astronomer many years of wonderful views. Alternatively, it would be an ideal second scope as a quick “grab and go” for the more seasoned observer that doesn’t have the budget for an apochromat.

I have a feeling I’ll be using mine a lot in the years to come.