A review of the 31 Nagler versus the 32 Edmund Erfle

A review of the 31 Nagler versus the 32 Edmund Erfle 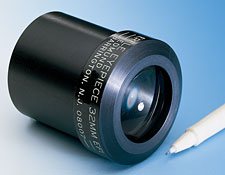 I believe in reviewing eyepieces by comparing them to something else. I compared this eyepiece to a 32 mm Edmund Erfle with the same number of elements, same apparent field, and almost identical field stop diameters as well as focal length. 31 for the Nagler 31.8 for the Edmund. There is no question that the 31 Nagler was much better edge corrected than the 32 Edmund. However, this full field sharpness came at a price. I don't just mean the $650 that the Nagler cost. I mean that at the center of the field, the Edmund 32 was clearly sharper. I did not have to sit there all night and keep changing the eyepieces to figure this out. It was obvious. I believe that the only area that the 31 Nagler beats this Edmund is in the outer 35% of the field where it is significantly sharper. In all other areas the Edmund has an edge. The Nagler is not as easy a view. There are blackout issues with the Nagler depending on eye placement, The Edmund is very easy to view through. Eye placement is not as critical. The Edmund is MUCH lighter, sharper in the center, cheaper, and I feel has better contrast than the 31 Nagler. If you have a fast F ratio scope and can afford to handle the price and weight, go with the Nagler. In my f/10, I will stick with the 32mm Edmund Erfle.

I sometimes tend to make my reviews a little short and here is more info on my thinking. The 32 Edmund had a useable field of 75 to 80%. The rest of it would be useful for framing purposes and finding objects at the edge. The only aberations I saw at the edge were astigmatism, plus marks+ not lines. Also, rectilinear distortion.

I chose the Edmund over the 31 Nagler because it is my interest to mainly look toward the center of the field and I want it as sharp there as I can get it. Televue should not feel bad, because this eyepiece is sharper at the centerfield position than any eyepiece I have compared it to at any focal length. Proxima, 1RPD, any Plossl, etc. It is not even close.

This Edmund performs well in a newt reflector down to f4.5 and I have used it in an 94mm f7 Brandon refractor with great results. It actually does a little better in these than in an f10 SCT. I believe this is because of the inherent field curvature of an f10 SCT. The SCT have more difficulty functioning in the 30mm range at f10 , but do better at 40mm eyepieces on up and 20mm eyepieces on down.

Information about spot size and such for the 32 edmund erfle can be found at Anchor Optics. The apparent field that is stated as 68 degrees is incorrect. It is more like 82.