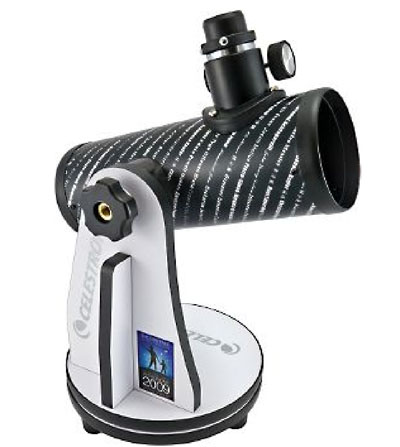 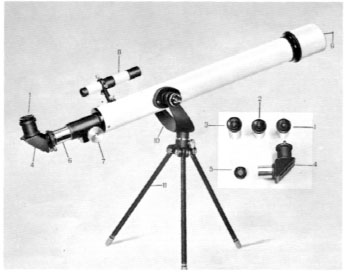 Can you get any real satisfaction out of using a tiny beginner’s scope? More important, can a beginner? That’s what was going through my mind as I purchased two beginner’s scopes recently, one the 76mm Celestron 21024 FirstScope promoted as having been “named Official Product of International Year of Astronomy 2009.” The second was a type I had owned in my early days as an amateur and discarded, so it’s in the neighborhood of 40-50 years old - a 50mm Tasco 6TE-5.

I won’t keep you in suspense. The main focus of this review is the FirstScope since it’s readily available, and my conclusion is that neither the FirstScope nor the Tasco gives much satisfaction out of the box. But with modifications that take them both out of their initial price niche, they can be made usable - so usable that the 50mm Tasco has captured a lot of my recent observing time. More on that later.

Unfortunately, after more than six hours of testing both little scopes on various observing conditions under my 5.5 New England skies, I discovered Orion makes what looks like the optical/mechanical twin of the FirstScope, labels it the “FunScope,” and sells it for the same price they charge for the FirstScope. But Orion introduced modifications that coincidentally speak to each of my complaints with the little Celestron. Wish I had bought it instead!

No, I do not have any connection with Orion, Celestron, Tasco, or any telescope manufacturer or retailer. I have been an amateur astronomer for half a century and written about telescopes and binoculars for various magazines. I do enjoy doing public outreach with my scopes, and so I’m always on the lookout for something I can recommend to beginners. Sadly, I could not recommend the FirstScope, as purchased, to beginners and since I haven’t tried the Orion, I don’t know if I could recommend it. 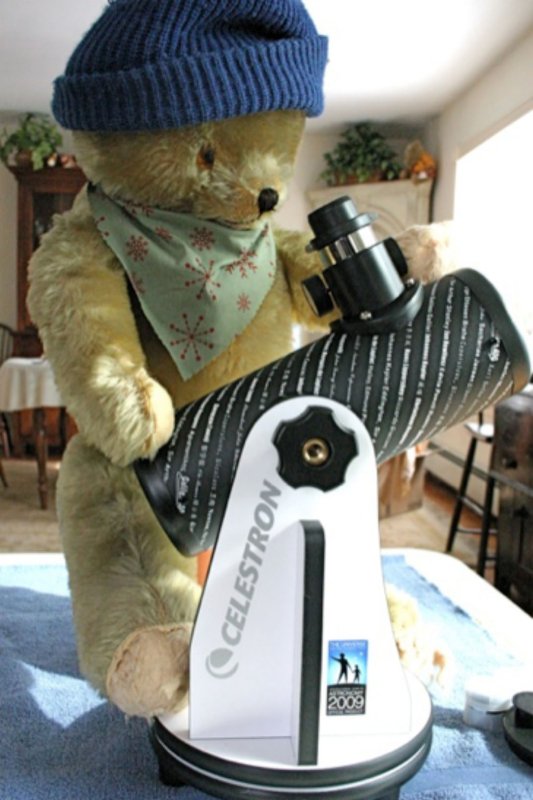 The FirstScope is surprisingly well constructed. And how could you argue with the price tag? I paid $45 and that included free shipping. It has a near terminal case of the cutes that appealed to me as soon as I took it out of the box, and I suspect would be very appealing to a child. But here are my problems:

How does Orion address these issues with the FunScope?

The FunScope comes with 20mm and 10mm eyepieces. What types? I don’t know. But just the fact that they choose 10mm as the high power makes more sense to me than trying to use a 4mm SR when the primary is an f/3.9 spherical mirror. Remember, I have not tried the Orion scope and so I don’t have any idea what the quality is. Obviously at this price not high, but perhaps acceptable. 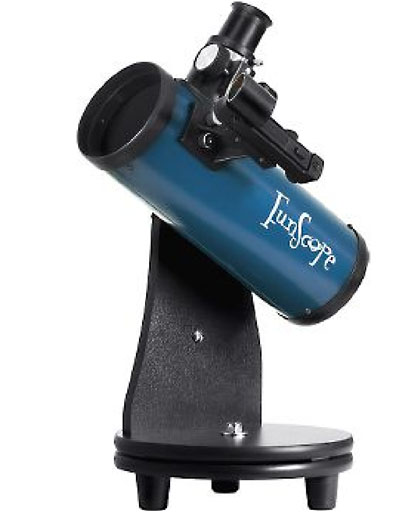 If you’re wondering about that fast spherical mirror, it isn’t the big problem. I actually tried a 5mm Nagler in the FirstScope and got a very satisfactory image of the Moon. Of course this is silly. No one in their right mind will spend $50 for a telescope, and then buy a $275 eyepiece! I suspect a Plössl would do quite well, but if you equip the little scope with inexpensive Plössls you will still quickly double the cost.

Celestron offers an accessory kit, and once more, you can’t argue with the price, but I have to be skeptical of the quality. (I did not buy it.) Amazon was selling this for $17.32, and it included the following: 12.5mm and 6mm eyepieces, moon filter, 5x24 finder scope, CD-Rom, and a nylon carrying bag. It may be unfair, but given the poor quality of the original eyepieces, I can’t imagine that the additional ones would be much of an improvement, and while I think a finder scope could help, it seems to me a red dot would be easier to use than a 5X24 straight through optical finer. The moon filter is a good idea since that’s likely to be the main target for any beginner with a small scope, and with the 76mm objective the moon is bright enough to be irritating, especially when near full.

There are several categories of potential users for this scope, so I don’t reject it outright. I can imagine amateurs with young children buying it to encourage the child to do as they do. They could equip it with a red dot finder, and they probably have some suitable eyepieces for it already. That would work. It could also be viewed more as a toy that actually works (somewhat) and perhaps fill a niche that way. But if adults - or a family with children - asked me if they should purchase this as their first telescope, I’d say no. My recommendation to adults is always to start with binoculars, but if they were looking for a small telescope on a tight budget, be prepared to invest something like $100 to $200.

And that, by the way, is a good thing to keep in mind when you look at the 50mm Tasco 6-TE5. When I bought this, one thing that was going through my mind was whether beginning enthusiasts got a better break 40 years ago than they do today. But given inflation, in real dollars they were paying a lot more for the Tasco then, than we pay for a beginner’s scope today.

But I bought it here on Cloudy Nights classifieds. I mount it on either a camera tripod or my AstroTech Voyager, and I use good eyepieces with it. I found it easy to point a small refractor because you sit behind it, and a 32mm Plössl gives me a true field of nearly 3.5 degrees at 19X. What’s more, the previous owner said it had been “recently nulled and collimated by someone in the know about such things,” and either the owner, or this other person, had given it a very nice, fresh coat of matte black paint and added two 1/4-20 blocks underneath it to which was attached a Vixen-style dovetail. 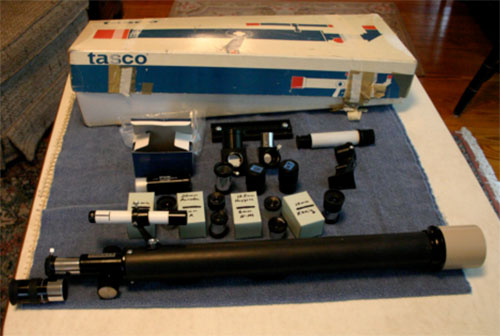 That’s a far cry from what someone got when s/he bought this scope originally. As sold to beginners in the 1960s it included a wimpy-looking table-top tripod, a minuscule straight-through finder - think of trying to use that combination for a moment while pointing at something high - and three .965 Huygens eyepieces.

Don’t turn up your nose at the .965 eyepieces. The scope I purchased on Cloudy Nights included several of these and some - with the included .965 diagonal - are quite good. But I l prefer to use the .965-to-1.25 hybrid diagonal that also came with my purchase, plus better eyepieces from my own collection. It also included a couple finders, but I prefer to use the 32mm eyepiece as a finder.

Once equipped this way I have been having a ball with the little scope. Though an achromat, at f/12 I have to really look for color fringing and only on the brightest objects, I am enthralled with the way it splits bright double stars such as Almach, Castor, Algieba, Mizar, and Albireo. Charming little round points of light! The Orion Nebula and Trapezium can blow you away in this scope. I tested this side-by-side with the Celestron FirstScope, and while the nebula was impressive in the FirstScope, I had a devil of a time seeing more than a couple of stars in the Trapezium. But, of course, with the FirstScope I was using the eyepieces that came with it. The 50mm, though smaller, had the advantage of much better - and more expensive - eyepieces. Star clusters like the Pleiades and Beehive are also quite impressive in the 50mm, as were the galaxies M81 and M82. (M65 and M66 were just detectable, as was M51. For me it was a thrill to see these with such a small instrument, but I’m afraid a beginner would either not see them at all, or not be very impressed.)

What did all this say to me? It said that a beginner - or experienced observer - could have a lot of fun, even with a scope as small as 50mm. But neither experienced user not beginner is going to get much satisfaction out of a new scope where the total investment today is $50 with no add-ons.

Bottom line: the FirstScope—as purchased—is a good toy; the 50mm Tasco as extensively modified gets to stay up late and play with the adults.