A Tale of Two Observatories

A Tale of Two Observatories.

Never mind grab'n go telescopes. Wouldn't it be nice to be able to take advantage of a clear night without the considerable effort of setting up your telescope and then, when the session is over, putting all that gear away? This is the main attraction of a backyard observatory. When the skies clear, you can be out and observing within 5 minutes or less.

It takes me less than 5 minutes to set up:

Ending the session is even faster.

A problem is that a decent backyard observatory is about the price of a fairly nice telescope. This can be partly ameliorated by buying a used one locally. That way, whatever investment you have in it can be recouped when you sell it. The problem with this is that few who buy one want to sell it!

I saw one of these at a star party that a vendor had brought with him in his large pickup truck. I was quite impressed, and placed an order for one on the spot. A couple of months later, a truck pulled into my back driveway and unloaded several large boxes, which contained the observatory.

I built a 10'X10' (3mx3m) square platform on which to place the observatory, and made a pier of four 4x4 posts sunk into the ground for my C-8 Ultima.

Assembly was fairly easy, as the instructions for assembly were on a DVD, and my wife and I followed it closely. Having two or three people to do the heavy lifting of the dome makes it almost easy to put in into final position and bolt the halves together. Overall, it took us about a day to watch the DVD, find the parts, and bolt/glue them into place. 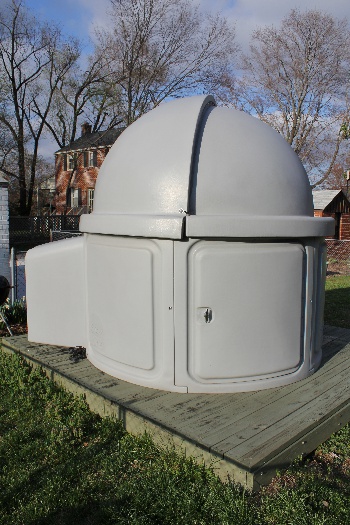 First light for the observatory occurred the next clear night, several weeks after we were done building it. There is nothing like new astronomical gear to bring on the clouds! Given that the plastic of the observatory looked much like kid's playground equipment, my wife wanted to dub the structure "The Little Tykes Observatory", but another friend suggested a more astronomical name, "The Little Tycho Observatory". 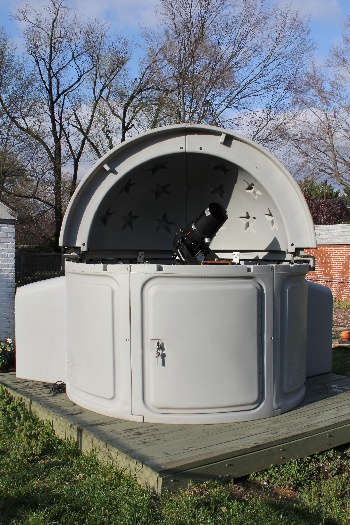 I found that the dome could be easily moved, and I could often position it strategically to mask annoying lights, but sometimes, even this was not effective. It also formed a nice wind block, and made observing much more comfortable.

I also found, much to my dismay, that the sky within 20 degrees of the zenith was not accessible with this dome. The large lip that provides protection during the daytime also covers over 10 degrees of sky at the zenith. This was a frustration. The manufacturer offers a slide off option, where the dome becomes a slide off roof, but this negates its ability to block the wind or shade lights. Not a good thing.

The dome also leaked pretty badly during storms, and I needed to keep a bucket in one of the storage pods to keep it from flooding. Despite a concerted attempt at calking, I never did stop the leaks.

Disappointed, I put the observatory up for sale, and within a couple of weeks, it was gone. I then learned another positive thing about the SkyShed POD: disassembly is easy. Three of us managed to take the observatory and its three pods completely apart and store it in the new owner's truck and U-Haul in around 45 minutes. 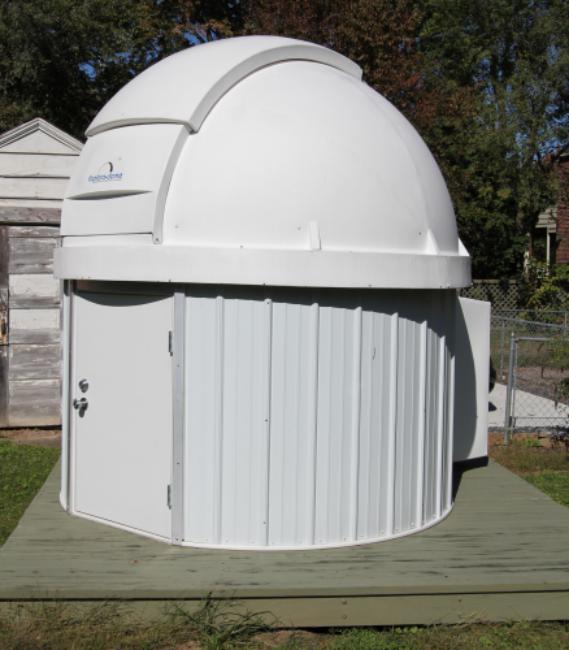 Selling the SkyShed POD resulted in my buying the Explora Dome, made by PolyTank Corp in MN.

The Explora Dome arrived much the same as the SkyShed POD, but this time fully assembled. The guys who drove it to my house also installed it for me. They were coming back from NEAF, an astronomy equipment expo, so I was not completely out of their way. I was lucky; you probably won't get the same service if you buy one without an extra fee.

This dome has a slit, and its inside is painted jet black. It also does not obscure the zenith. 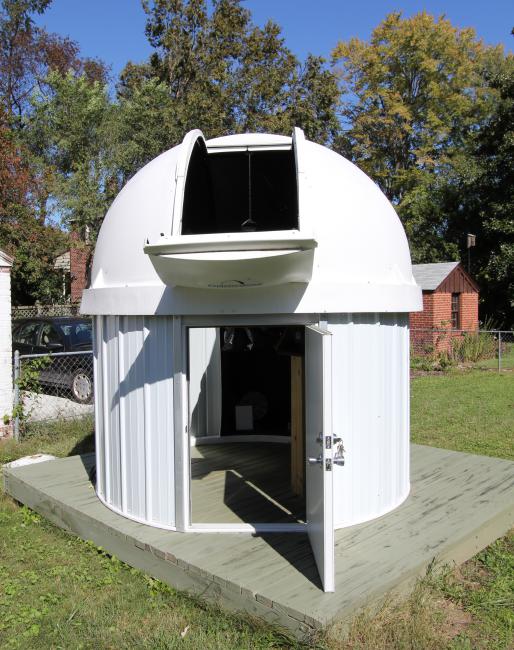 The dome is easily rotated to any position, and holds its place when you've got it where you want it. There are handholds located at the bottom of the dome that are easily grabbed from almost anywhere in the dome to rotate it. Opening the slit, however takes a bit of muscle.

In use, the slit allows much less light into it than the SkyShed POD. This is a distinct advantage for my urban location. The less ambient light that intrudes upon my eye, the easier it is to pick up the faint stars that I'm looking for in the first place.

A nice, but minor advantage is that the Explora Dome is quite watertight. No more buckets to catch the internal run off.

The Explora Dome is also painted brilliant white on its exterior. I find it to be about 20°F cooler in the hot summer daytime than the SkyShed POD. This is an advantage while waiting for optics to cool down so they can provide optimum images.

As a wind and dew shield, the Explora Dome is even more effective than was the SkyShed POD.

I have not had to take the Explora Dome apart or reassemble it, but I expect it would be more difficult than the SkyShed POD, and the dome would not break down into easily transported pieces.

The Explora Dome designers neglected to deal with the cords and their handles that open and close the slit. They just hang down into the center of the observatory, getting in the way of telescope operations, as shown in the picture below. 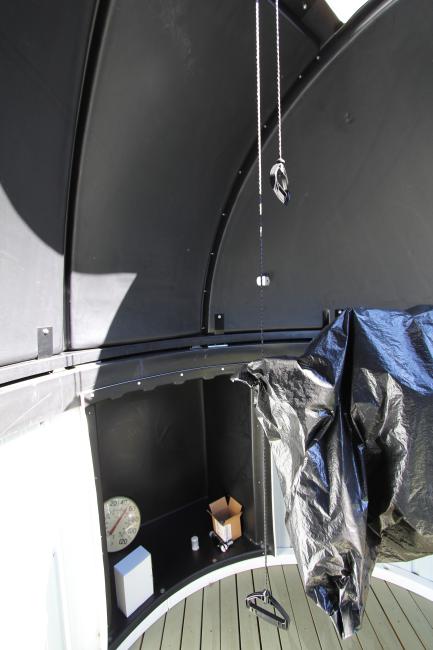 This is an easily solved problem. My solution was to stick a large plastic clasp on the dome opposite the slit, and clip the longer cord to it, and then clip the handle to the cord itself, out of the way with a clothespin. See below. 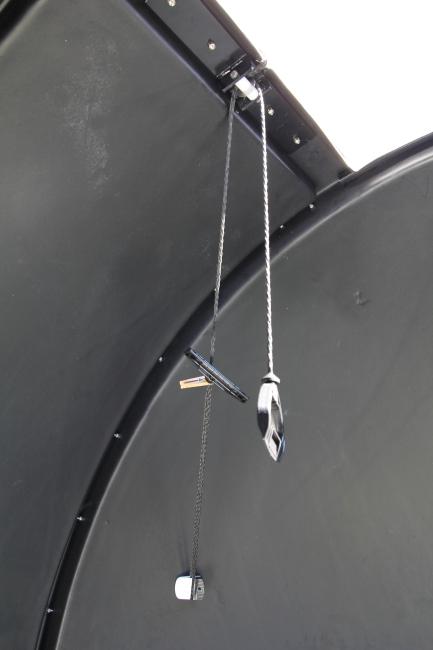 General Notes about these Observatories.

Both observatories are made of high quality materials. Fasteners are uniformly stainless steel and ancillary hardware is well made. The Explora Dome has the edge however. The door, door frame, locks and dome rollers are a notch above those of the SkyShed POD.

Both observatories have the distinct advantage of suppressing dew. On nights where I'd have to be powering my dew heaters around the corrector plate on a dewy night, the SkyShed POD and Explora Dome act as excellent dew shields. This is especially true of the Explora Dome. One dewy night when the transparency was so-so, but the seeing was 0.5", the C-8 in the SkyShed POD started to suffer from dew, and I needed to power up the dew heater. On a similar night, when the sky seemed to rain dew, the Explora Dome managed to protect the telescope and I did not need to use the dew heater.

Both observatories work best with short tube telescopes. Theoretically, you could have a scope with a 7 foot (2.1m) tube in it, but getting your eye to the eyepiece would be a difficult proposition. This rules out huge Dobsonians and most long focus refractors. The compact space within the dome is probably best served by a catadioptric, like my C-8.

The storage pods in both observatories seem like a good idea, and my SkyShed POD had three of them. In practice, I find I don't use them very much. They would be much more useful if I were to install shelves in them.

If you're a planetary observer who does not need to see the zenith, and wants to see more of the sky than a narrow slit will allow, the SkyShed POD is for you.

If, however, your urban observing is of a more stellar nature, as is mine, the Explora Dome's access to the zenith is essential. Its much darker dome, which masks ambient light, allows fainter stars to be seen than the more open SkyShed POD design. I've managed to see stars as faint as 13.5mv in my C-8 Ultima from the Explora Dome. I was lucky to see 13mv from the SkyShed POD.