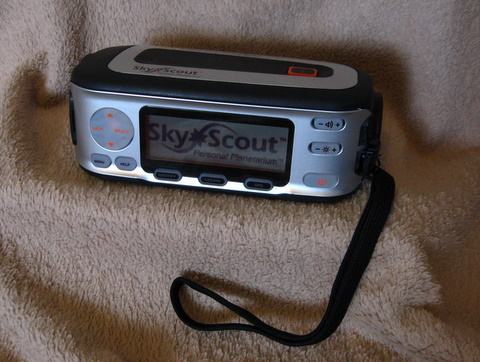 The Celestron SkyScout was made for someone like me. I've always had an interest in the night sky, but never knew much about it or how to navigate it. The feeling has only grown since I've moved to the dark skies of Arizona's White Mountains. After using the SkyScout for the past year I can appreciate how simple and fun it makes learning about the universe.

The SkyScout is easy to use out of the box. (Just make sure to slip the batteries into the battery shields.) The hardest part is letting it "find" itself. Most of the time it will only take about 2 minutes. (And sometimes will put you on the other side of the world, just let it sit a while longer before using or restart it.) After that it's ready to use. (Tip - I've found that walking around with it a bit really helps improve the accuracy after startup.) It is really intuitive to use, "Locate" and "Identify" will get you almost anywhere you need to go. Locate will give you a list with "Tonight's Highlights", Planets, Stars, Constellations, Deep Sky, Comets, and Asterisms. All with sub menus to guide you to where you want to look. Identify has you pick a part of the sky and Target. Then it will give you a list to choose from starting with the brightest object in that area.

The SkyScout also has descriptions and information about almost every object in it's database, most major ones have audio. It even has some trivia about non-objects in the Field Guide such as an Introduction to Astronomy, a Glossary, Great Astronomers, Man made Objects, Asteroids, and Extra-Solar Planets. The Folks at Celestron made sure this was a complete learning tool. If that still wasn't enough they offer two supplemental cards "Astronomy for Beginners" and "All about Stars". There is also a third card for the IYA 2009 edition but is only available with that SkyScout. I have both the "Astronomy for Beginners" and "All about Stars" but I find I like the information in the Beginner card much better. 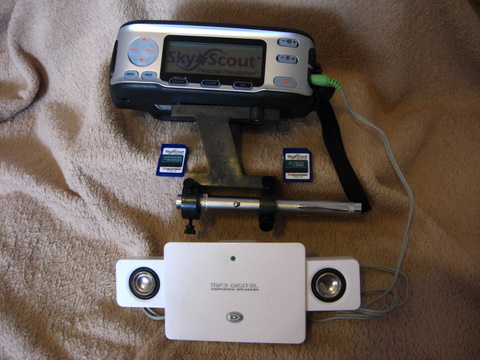 The SkyScout works great by itself, but I thought it could use some upgrades. One of the best things about learning the night sky is wanting to share that knowledge with others. One way to do that is by adding an external speaker. Celestron has one but is recharged through a USB cable. (Not something I always have while outdoors.) I think just about any external speaker will work. I've even used a little FM transmitter to broadcast to a nearby radio.

The second great improvement was the Orion Laser Pointer Bracket. This helps in a couple ways. First, it lets others see what you're pointing at. It also helps train binoculars and telescopes onto the objects you're looking at. And most importantly (according to some Boy Scouts) it looks really cool. ( If I could change some things about this, I would like it to be completely tool-less. The bracket and collar both use Allen screws and it would be nice to replace those with thumbscrews.) 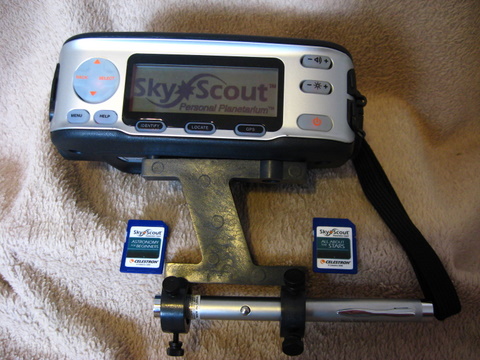 Now about the Cons. The SkyScout is the first of it's kind to my knowledge and not without flaws.
Altogether I think it is a great learning tool. I find I'm enjoying it even more when I use it in groups. I'll bring it to family reunions or my son's scout camps and the night hours just fly by. The only way I could not recommend it is if Celestron had a newer model that addressed the current problems and added newer features.